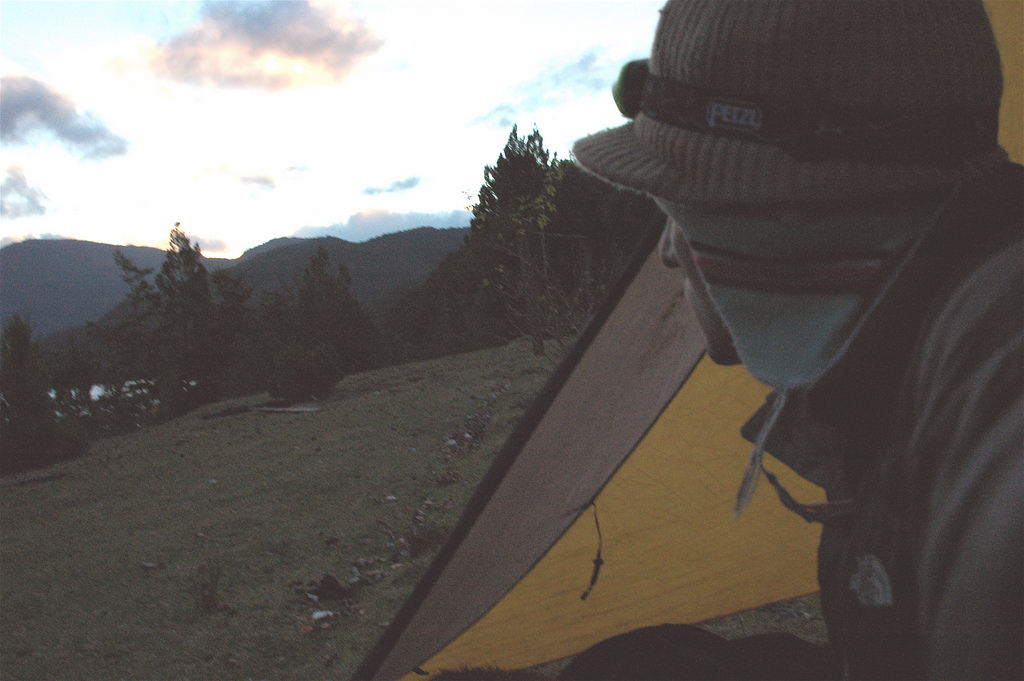 Instead of getting on a bus, David Miller chooses a backcountry option for visa renewal, hiking from Argentine to Chilean Patagonia (and back) to get his passport stamped.

Km 0.0 – Finished packing. Realized fastex buckle on hip-belt was broken. Looked for replacement (none). Took this as possible bad omen. Visualized being unable to adequately tighten hip-belt and having pack kill shoulders for 2 days. Said “fuck it” then tied loose straps in square knot. Walked out of house. Looked at sky over cordillera (rainclouds). Thought about it raining almost continuously over the past 2 days.

Km. 0.1 – Got picked up by guy in rusted-out Ford Falcon. Took this as possible good omen. Thought about so many times trying to hitch on A.T (Appalachian Trail) when nobody would stop.  Said “gracias,” and the man said “porque?” in a way that didn’t sound like an expression, but literally “why?”

Km. 0.2 – Waited for bus to Lago Puelo. Thought about looking in fly-shop for replacement piece for hip-belt even though I realized shop wasn’t open yet. 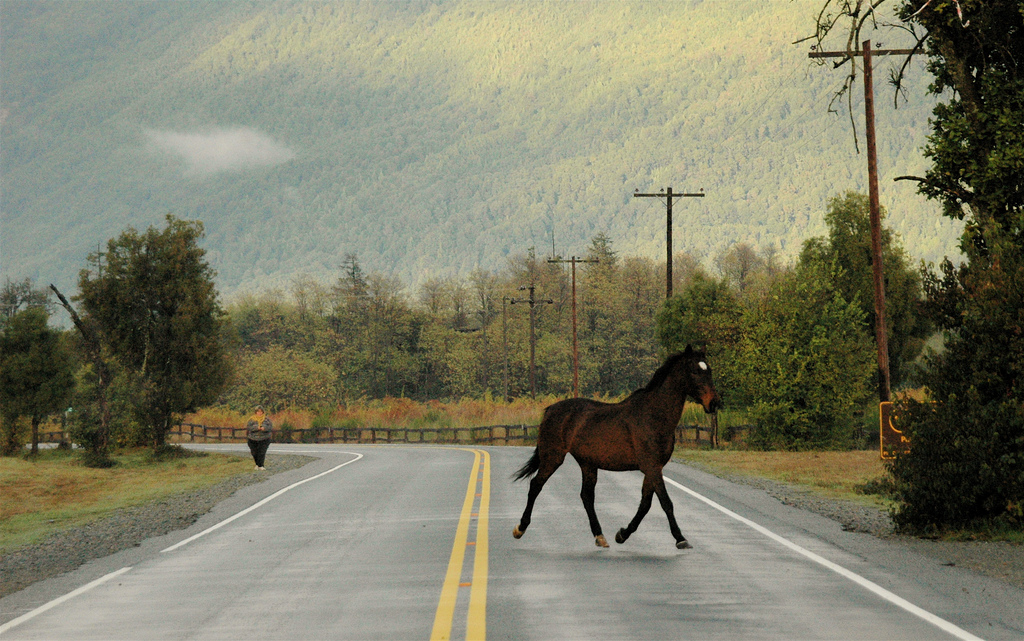 Thought “this is how it used to feel ‘interacting’ with towns on the trail–wandering around looking for replacement gear, parts, food, liquor, showers, then hiking back up into the woods where you seemed to belong.

Km 0.8 – Walked from end of bus line at Lago Puelo to park entrance. Saw horses trotting down center of road. Felt urge to take morning shit. Saw that no rangers had arrived at park entrance even though it was scheduled to open already. Rested pack against hut. Bushwhacked 15 meters through mosqueta along roadside. Dug latrine with knife. Defecated. Decided against waiting for park rangers to show up. Entered park without registering / paying. 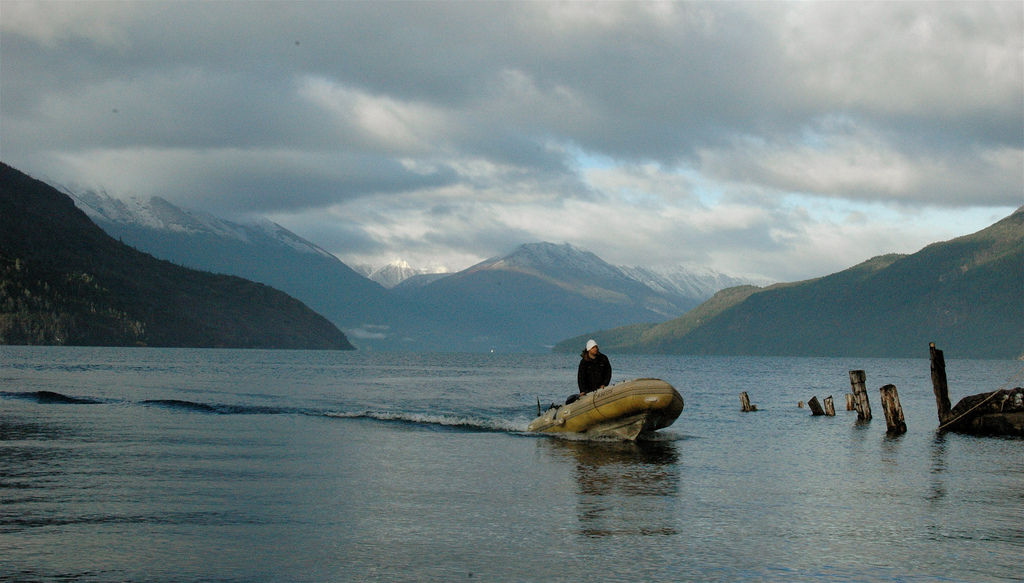 Studied three separate crossings that would have to be waded if you didn’t get ferried by boat. Looked at current entering Lago Puelo and threading through dock pilings,  forming last eddy on the Rio Azul. Said this to kid, “El ultimo eddy.”

Km 3.5 – Climbed past sign of trail cut-off to pasarela (hanging-bridge). Made mental note for hike back. Overheated. Took off jacket. Drank water. 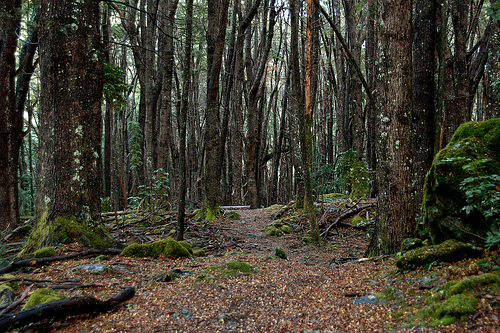 Thought about Lau and Layla at home waking up, having breakfast. Felt lonely. Thought “I should be ‘documenting’ this.” Stopped and took picture of forest (pictured here).

Saw mossed-over stack of logs. Wondered about the “viejo poblador” (original settler) who must’ve cut them. Felt stoked for some reason.

Envisioned new series on my blog (“things that make me stoked”). Tried to calm mind and just look at trail. Started getting cold. “Created” song in my head (mix of Deerhunter + reggae bassline?) that lasted 30 minutes and helped ascent of next hill. Tried to empty mind again and thought “it’s hard.” Began steep descent towards lake on super wet, loose rock.

Km 4.8 – Arrived at Gendarmeria: two large buildings, white with green roofs.  Saw young Argentine soldiers + paisanos trying to fix small dam that had flooded. Walked inside. Noticed crucifix on wall. Was questioned by an older (late 50s) white-looking officer in distrustful / angry way:  What was my occupation? Do I have family here in Argentina? Was questioned by young Indian-looking soldier who seemed to want to impress officer and began asking things in an aggressive way:  Was I just doing this to renew visa? How long was I planning to spend here?

Was questioned by young Indian-looking soldier who seemed to want to impress white officer and began asking things in an aggressive way: Was I just doing this to renew visa? How long was I planning to spend here?

Thought “jesus dude I’m just out here hiking, sort of.” Looked at pouches under white officer’s eyes. Visualized violent things he might’ve done as a young soldier during the dirty war. Told them: “Che, I’m trying to process my residencia but it’s taking forever for them to send the paperwork.” Thought how people are less alienated when you operate using same social / cultural cues. Thought “they don’t know / care about ‘being a writer,’ but they know about waiting on fucking paperwork.”

Km 5.8 – Continued hiking while thinking about white officer as symbolic of what men fear–not fear in the sense of being afraid of but something you feared becoming–old / soft / angry, trying to hold whatever power you could over others. Thought “let it go.” Thought “empty mind.” Hiked multiple ascents and descents, very steep, with much of trail essentially a flowing creek. Felt socks soaking through.

Reached creek that was too high to cross without wading. Searched upstream / crossed via log + semi-submerged rocks. Noticed sky was darker, but couldn’t tell if it was cloud cover or position of sun. Got cold. Started climbing again, then overheated. Reached higher elevation forest full of caña colihue. Broke off two stalks for walking sticks. 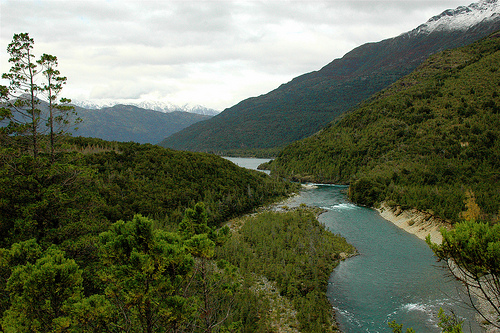 Km 8.4 – Reached border crossing / sign that said LIMITE CON CHILE. Thought about taking picture but hands were too cold / energy level too low. Thought about how people like to look at pictures of signs.

Km 13.7 – Crossed several minor creeks. Noticed beginning of pain / inflammation in ligaments in left knee. Felt lower pant-legs / long underwear soaking through. Started getting panic feeling of “I’m not going to make it.” Thought “I haven’t really gone that far / what the fuck is going on with my body / am I just turning into an old fuck?” Felt need to defecate but didn’t want to stop / get cold. Passed good campsite, then thought “I should’ve stopped there.” Started feeling dehydrated. Filled up water bottle at creek. Thought “the terrain is brutal but at least the water is all good to go.”

Km 14. 7 – Began limping due to increasing pain in left knee. Continued worrying how I’d make it tomorrow. Wondered about transport options out of Lago Inferior. 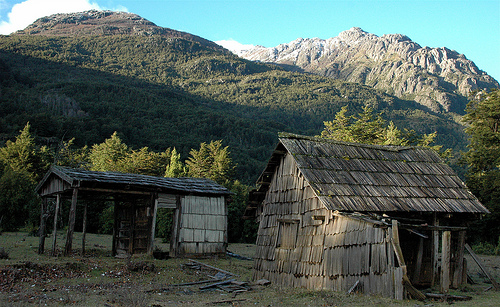 Started slipping in various places on trail. Realized I had no energy left. Felt cold but then began long climb and started overheating. Felt uncomfortable pressure in bowels.

Km 15.3 – Reached abandoned farm. Defecated at edge of field. Burned toilet paper. Explored farm. Took pictures of Cerro Aguja Norte + outbuildings. Saw that sky had cleared somewhat. Noticed one outbuilding had dozens of wire hooks in ceiling. Realized this was where they kept sheep that had been butchered. 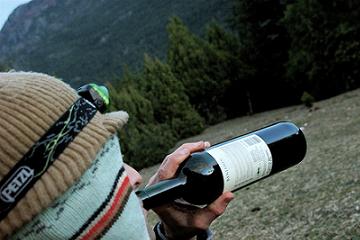 Thought about having your days/nights “kept track of” in a passport. Checked water bottle (not enough for coffee in the morning). Took 2 ibuprofen + small swig of water. Started falling asleep.

Woke back up. Heard sound, a motor. Thought “someone approaching via motorcycle? (impossible), boat?” Then realized “generator at Chilean checkpoint .” Saw there was still a bit of color in the sky. Tried to lie back down. Heard a stamping sound. Looked out of tent: two horses. Thought “are they wild? (no, their tails are clipped–they belong to someone.)” Thought “isn’t it strange camping here, where a family or families once lived?” Thought “No, what’s strange is how almost every place has these stories, these places where other people once lived, it’s just that most of them have been covered over so long ago you forget you’re living on top of them.”

Woke up in morning to rain-sound on tent. Flexed knee (sore, but at least able to be flexed). Drank water. Fell back asleep again, maybe 30 minutes. Woke back up. Packed. Thought about so many mornings on the trail doing this, and the final move: putting on wet boots / pants/ jacket.

Km 15.9 – Passed back by where I camped and saw the two horses from last night Felt happy. Stopped at creek below / filled up water bottle. Noted creek was significantly lower. Drank half a liter. Urinated. Noticed piss was very dark. Drank more water.

Km 24.6 – Felt for some reason I’d have trouble at the Argentine checkpoint. Visualized arguments / negative scenarios involving white soldier. Studied terrain / alternative routes for sneaking around if necessary. Noticed right calf / knee beginning to hurt from compensating for left side. Entered checkpoint. Saw paisanos waving at me approaching. Heard one yell out something.

Felt like they were watching me approach (after having spent the night out in cold / wet conditions) with certain air of respect and / or sense of “crazy gringo.”

Felt like they were watching me approach (after spending the night in cold / wet conditions) with certain air of respect and / or sense of “crazy gringo.” Had passport stamped by Indian-looking soldier. Saw white officer again, this time out of uniform, his eyes red, his nose watering–he appeared sick. Sensed that now these guys just wanted to talk. Answered their questions about trail conditions (flooded / very bad) and life in the US. Felt strangely relieved + emotional. Thought “why was I so worried about this?”

Km 28.5 – Reached trail cut-off to pasarela. Visualized walking across bridge back into town, calling a taxi or catching a bus home.

Km 32 – Felt relieved that trail towards pasarela seemed to be roadway instead of trail through woods. Thought “it will be easier to follow once it gets dark.” Put on headlamp.

Km 35 – Night-hiked road until it dead-ended at the river. Thought “WTF? No pasarela?” Realized the trail must’ve cut off from the road somewhere but I’d missed it in the dark.

Started walking along bank but it became steep / impossible to follow. Shined headlamp through water and imagined fording at night (suicidal). Visualized camping and trying in the morning. Visualized girls at home (frightened b/c I didn’t make it back). Thought about walking back uphill and looking for missed trailhead but realized it would be impossible to find in dark + I was too tired.

Km 36 – Saw hundreds of eyes lighting up in my headlamp beam (sheep). Heard dogs barking. Saw light on in farmhouse. Clapped my hands (in 2-3 clave, 1-2, 1-2-3) like the people here in the campo (no doorbells). Saw man my age come out / tell the dogs to hush. Said “Sorry to bother you. I got lost. I was looking for the pasarela,” then felt sense of flow occurring as he said “you want me to ferry you across here en barco?” Walked down to the river with him and got in a small rowboat. Asked his name (Juan). Watched him rowing us out of the eddy. Felt the boat enter the current. Cut off headlamp. Rested. Noticed for the first time that the sky was finally clear. Heard the sound of the oars in the water. Looked up at the stars.

Tagged
Narrative Argentina Chile
What did you think of this story?
Meh
Good
Awesome