1. Buffalo Park, a meadow at the foot of the San Francisco Peaks, Flagstaff, Az.

I first came to Buffalo Park in January, 1985. I slogged through knee-high snow into the shelter of the archway, took a deep breath and walked out to the trail. I was a greenhorn, newly come into an ocean of snow-glare and wet silver sky. I settled my X-country skis more firmly on my shoulder, turned tail and fled. 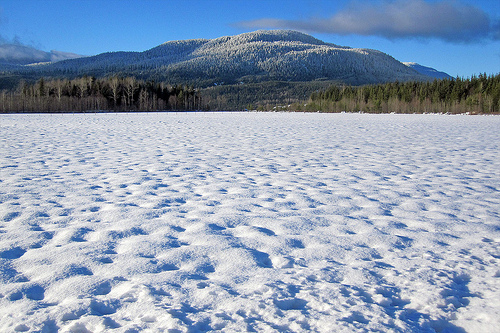 I didn’t go back to Buffalo Park for a year and when I did, it was on an early evening in June.

I took my little self out on the trail. I walked with my small sorrows, my tiny fears, my growing wonder on the two-mile loop of red gravel. The light began to fade. By the time I curved back toward the east and saw a huge globe of cool white rising from the flank of the mountain, I understood I had found shelter.

I still walk the trail five or six times a week. I’ve found an old alligator juniper and a basalt outcropping perfect for the solo bouldering moves of a 63-year-old woman with a bad back. I take a side-trail to avoid seeing the houses.

I’ve been granted what some might call miracles, others might call impossible intersections of pain and what felt like healing. On an evening I needed to remember how hunger rules, there was a hawk, perhaps five feet ahead, treading on the limp body of a rabbit. The day my last lover took off with one of my close friends, I found at the side of the trail a tiny river pebble painted with a black zero. The place is generous and voracious, a double gift not unwrapped by logic.

So I was not surprised the late Spring afternoon I drove to the top of the hill and saw a Buddhist monk sitting at the entrance to the parking lot. He held three slender poles out over the road. Bright flags—yellow, red and blue, fluttered from the poles. He sat on a faded Army blanket, his back straight, his body absolutely still. He’d wrapped himself in a second blanket, the folds pulled over his head as a hood. There were a few books on the blanket, and a jug of water.

I parked. The air went silent, as though the traffic on the highway just at the turn-off had stopped. I watched pick-ups and cars race by. I saw the tops of the pines sway, knew a hard wind moved them, the same wind that caught the flags in its currents. I took a step toward the monk. The silence stopped me. He was held by it. I began to turn back toward the trail and heard the sharp snap of the flags in the wind.

I walked for an hour or so. I thought about the monk. Flagstaff had been visited over the Spring and Summer by groups of Tibetan Buddhist monks. They brought ceremonies and blessings; their voices had filled my spirit with the impossible sound of one man’s throat making chords. And, they had brought news of occupied Tibet and pictures of the homeland from which they were exiled.

The place is generous and voracious, a double gift not unwrapped by logic.

I finished my walk and stepped out through the archway. The monk had moved to the west side of the parking lot. His flags lay furled on the blanket. Something glittered at his side. I saw it was a metal bowl and walked over to see if he would accept a donation.

“Excuse me,” I said. The monk slowly turned. “Could you use…” my words caught, because the monk looked up at me with bright blue eyes. Her face was dark, a mix of road-grime and tan. Her hair had been hacked off. What was left was sun-bleached and dusty. She smiled. “Could you use,” I said, “a few bucks?”

She nodded graciously, held her hands in front of her heart and bowed. “I most assuredly could,” she said. “I’ll be hungry after I walk back to town.”

I gave her a few dollars. She reached up and took my hand before she took the money.

“Look,” she said. “I made these flags. From shirts I got at Goodwill.” She held them up. Red plaid cotton. A scrap of blue uniform. Yellow calico, its tiny flowers and hearts still bright.

I knew who she was. Not Tibetan. Not a monk. Not Buddhist in any but the wildest sense. She was a local, a woman who sometimes fought, and other times surrendered to flash-floods of highs and lows, a woman from a wealthy Sedona family, a woman who I had heard ordering cappuccino at the local cafe, and judged harshly because of the perfection of her clothes and haircut.

39 of the most breathtaking natural wonders in the world
This map of the US compares state populations to that of world countries
For the perfect day of hiking and Colombian coffee, head to Jardín
How to plan for 2021 travel in the age of COVID, according to 23 travel agents
The spookiest mythical creature in every country in the world