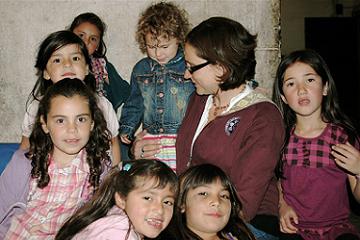 Some of the Colque grandkids + Lau and Layla.

Maxi is carrying crates of beer down into a well-pit. I whistle to him across the fence and he grins back at me.

Maxi is one of Adela’s 80 grandchildren. He’s about 17. When the men are working on a car he’ll look under the hood with them for a few minutes but that’s all. Afterwards he goes back to playing soccer with the younger kids. He’s just the right age, size, and strength to carry the beer down to cold water in the bottom of the well.

Maradona gets the fire going around 7. I still haven’t learned everyone’s name yet, but he’s the one son who still lives in the house with Adela, and is middle aged, maybe 46. He doesn’t seem to have a wife, but perhaps is Maxi’s dad. He has hair like Diego Maradona.

Around 8 he sets up the asado: two Patagonian lambs flayed on racks and tilted towards the fire, and dozens of whole chickens and sausages laid out on different grills with shovelfuls of coals slid underneath.

We see Fatima wearing a ballerina outfit. Layla goes in to tell Mamá. “Nena vestido!” she says. “We’re going over in just a little bit,” I tell her. She goes back to her room and gets her striped dress and lays it out on the floor “Ese vestido,” she says.

Lau gets out of the shower and puts on a blouse. It feels like we’re ‘going out’ even though we’re just walking next door. We take the camera. We take two bottles of cider and two pan dulces. The kids meet us out in the street and Brisa takes the bag of food and drinks from us. Two of the girls, Abril and Agustina reach up to carry Layla in but when she squirms and climbs further up into Lau’s arms. Adela stands by the door of the house smiling at us.

Three weeks ago she asked me if we have any family acá. I told her we don’t, that they’re all in Buenos Aires or “allá” which means back in the place my accent comes from. But then, perhaps because of the way she looked at me when I said this I felt the need to add something so I said “But we stay in touch with them on the computer.” She nodded and then said “Well if you don’t have plans for el 31, come over and spend it with us.” 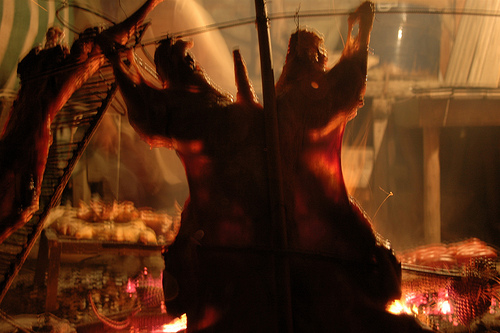 The men are standing by the fire passing around liters of beer. I tell Lau I’m going over there. Noel and the others boys try to get me to play soccer with them instead. I tell them in a minute.

There are about 8 men by the fire, all Adela’s sons or sons in law. I’ve only spoken to Maradona before and I feel embarrassed walking up. I don’t really know how to introduce myself but then we’re all more or less the same age (fathers with young children) and I just nod to everyone and step into an open place by the fire. The beer bottle comes around and I take a pull and pass it on.

I look at the fire and then ask Maradona how long it takes to cook cordero (2 hours on the ribs side, then 20 minutes).

I tell them about how people back where I’m from have pig-roasts. For a second it makes me think about a certain time (late 90s) and place (The Chattooga River) and people (raft guides and safety kayakers, most beer-drunk and tripping on acid or mushrooms on top of raft busses), and how at that time I had a much more limited perspective of acá and allá. But I can’t really explain that here so I just say “yeah, we roast the pigs by burying them for hours in hot coals.”

The beer comes back around to me again and I take a swig and then pass it to Noel and Brisa’s dad then walk back to the house to see how the girls are.

The Colque’s house is unfinished concrete and block construction with windows missing but little details like wooden swans in the dooryard. For a second I just stand in the entrance and look inside. The stereo is playing cumbia and reggeton at med-high volume. There are probably 20 different Colque women, both Adela’s daughters and grandaughters inside the small kitchen / eating area. They’re all talking and laughing and rapidly preparing salads and tending to the children.

I’ve only met a few of them and up until now have only seen them in long sleeve shirts and sweatshirts for working in the farm. Tonight they have on dresses and blouses and I pretend not to notice (and they pretend not to notice me noticing) several of the young women’s large and in some cases enormous breasts.

Then a kid, maybe 16, his hair cut in 80s (The Cure) style pushes through the doorway behind me then pats me on the shoulder and as if reading my mind says “don’t be embarrassed, go in!”

Back at the fire I ask questions about the land here, the well-pit (you hit water here in 3 meters).

I ask if the nearby creek ever floods (no, but the river does.) Adela’s husband, a skinny man in his 60s, offers me a cigarette. He speaks in a crazy slang and accent that I can barely understand. I ask about what it was like here before there was pavement on the highway. I ask about the Indians who were here before. “The viejos pobladores live up by Nahuel Pan,” Maradona says.

The food is nearly cooked and the women call for some more tables inside. I’m standing opposite of where a table is so I grab an end and help carry it towards the house. 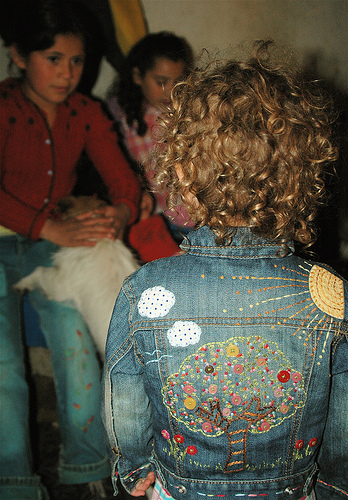 Adela has saved us seats next to her at dinner. Lau is asking about how each person in the room is related to the other.

There are so many people that if you need something (like water) you just yell it out over the music and then people keep repeating it across the room until whoever is in the kitchen passes it out and it moves from hand to hand across the room.

I cut a piece of sausage and fold it into a roll with chimichuri sauce and a salad of bittersweet greens.

It occurs to me that everything on the table except for the drinks and the salt and pepper was either grown or raised here. The cordero is salty and wild-tasting, an animal that lived its life grazing Patagonian grasses and wild rose. Layla grabs a piece off my plate and starts chewing (she’s been, up until now, a vegetarian). Lau and Adela both notice it and smile. “Más,” Layla says.

After dinner the kids start lighting fireworks in what would pass in the US as basically unsupervised pandemonium. Five year old girls are holding Roman candles and 7 year old boys are launching bottle rockets directly out of their hands. I have Layla up in my arms the whole time but she keeps squirming to get down. The kids come over and give her a sparkler.

We go back to the house to put Layla to bed. Lau and I talk about the party. I tell her that the whole fireworks thing is an example of how people like the Colques simply live with less fear and worry than other people. “It’s like, sooner or later, one of them loses and eye or a hand or whatever,” I say. “But then instead of worrying about it, it’s just like ‘si, si, pobre Pablito, one year he was holding a Roman candle and the puta cosa just blew up in his hand.’”

Of course this is just the kind of bullshit you say when you don’t want there to be silence or talk about things that will make you depressed. But then Lau mentions that while Adela was explaining all the different relationships at dinner she had said that one of her kids had died. “She didn’t really go into it though,” Lau said. 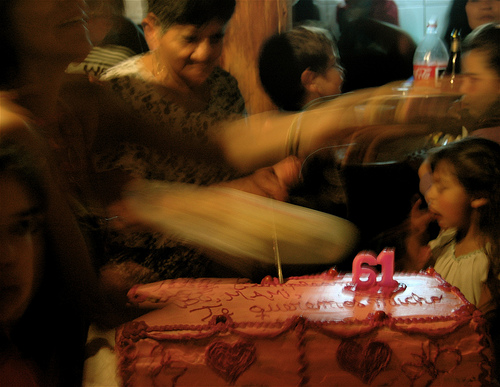 Besides being New Year’s, the 31st is also Adela’s birthday. Lau stays back while Layla sleeps and I go over back over just to say thanks and goodbye.

I see a few of the men still by the fire but most everyone is back inside the house. I hear them singing. When I walk back in Adela has a knife and is cutting a cake the size of a small table. I look at the way she holds the knife and remember how yesterday she explained how to slice the roots of the thistles in the yard to make them easier to pull.

It occurs to me that when Lau brought up what Adela had said about a child dying, she wasn’t saying this in and of itself but was also thinking about the baby she miscarried a few months ago. Right now Lau would be around 6 months pregnant and we’re both grieving this in our own ways. The candles on Adela’s cake say 61. Each year you get older you learn how it feels to lose a little more. Adela looks at me standing there. She gives a nod indicating she understands we put Layla to bed. Then she cuts a big corner off the cake. “Llevátela.” she says. Take it back with you.

What did you think of this article?
Meh
Good
Awesome
Bookmark
Posted In
Narrative
Destinations
Argentina