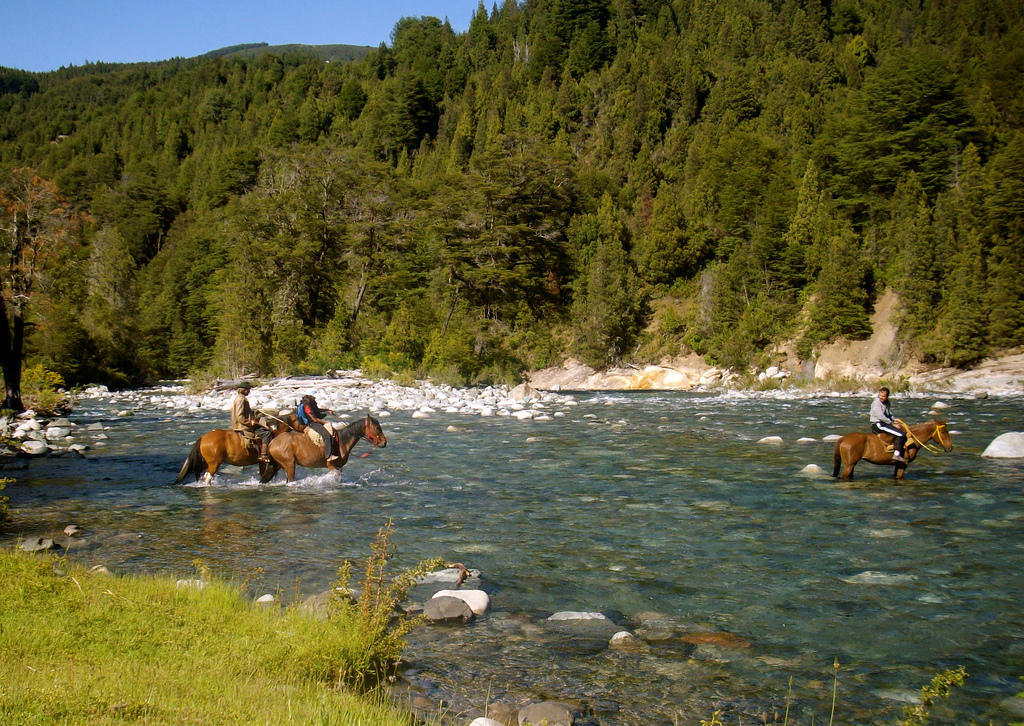 Rio Azul, just below confluence. All photos by David Miller.

Three weeks after moving to Patagonia, David Miller paddles a river almost too good to believe.

SOMETIMES ALL IT TAKES is showing up. This occurred to me during the hike into the confluence of Rios Azul and Blanco near El Bolsón, Patagonia, pausing for a moment to rest the knees and study the terrain–the two rivers dropping out of steep notches in the cordillera, then joining in the valley where I could hear whitewater hundreds of meters below.

Today was a paddle day. I was coming to visit Shea Jordan and the crew at Lat42South for a Sunday run down the Confluence section of the Rio Azul. They were looking for another safety kayaker and I was looking for (after being down here pretty much solo for three weeks), my gente.

We let the world become more complicated than it needs to be. Know who your tribe is and you’re most of the way there. It doesn’t matter if I’m in Seattle or San Juan del Sur: my gente are the people who go up and down mountains and rivers and waves.

Just before reaching the bottom of the road I met up with a local kid, maybe 25, named Federico. He was going on the trip as a passajero (test dummy). We got down to the river, hiked upstream and then crossed a dilapidated footbridge. The river flowing below was totally clear. 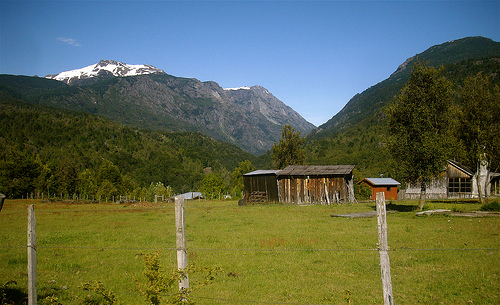 Chacra on the road to the confluence.

This was my first time seeing any of this part of the Andes, essentially the base of the glaciated peaks I find myself constantly looking at from town.

Unlike the US and other parts of the world, there are no trophy houses built up on the mountainsides. Most of the population lives in the valley, in town.

There were still people back here but they were essentially gauchos, people who lived an agrarian life on small farms.

We ascended several more switchbacks, then the trail rounded off at a broad saddle of land above the confluence. Knolls of pastureland, gently sloping, rolled down to orchards and gardens with small outbuildings set into the hillside, the grass covering over the roofs.

Inside, Shea and and several other kids were sitting on the sofas. I was introduced to Claus and Manuel, two young raft guides who lived nearby. Omar, Shea’s business partner from Buenos Aires, was also there. We talked about the run today, the river level. 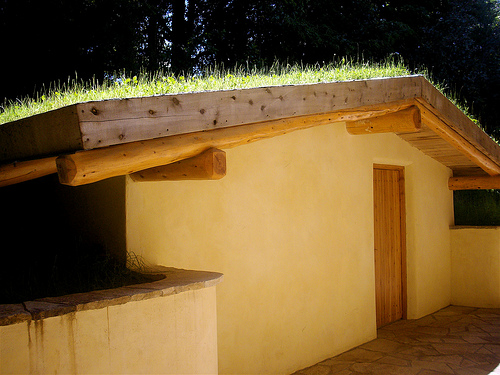 I realized I was witnessing (and in some way, participating in) something amazing. After spending what seems like my entire youth hanging around different rivers and raft companies that had been in business for decades, here were these kids setting up a brand new one, on an essentially virgin stretch of river, a place that had been run so few times only a couple spots even had names.

Shea took me on a quick tour of the lodge. The building was shaped like a shallow V with dormitories on one wing and a private suite plus office / library on the other.

The two were joined via a common area with a deck overlooking the gorge. The lower level was all open with a kitchen plus huge walk-in pantry (stacked floor to ceiling with fruit preserves they’d canned themselves and herbs from the garden) on one side, then a lounge area with ping-pong table and TV on the other.

At the center was a massive wood-burning stove and sofas. Everything was made out of rough-cut native cypress, and the main level walls were straw bale with adobe. It was an ideal juxtaposition: you could hear the river down below, see the mountains all around, and there was WiFi. 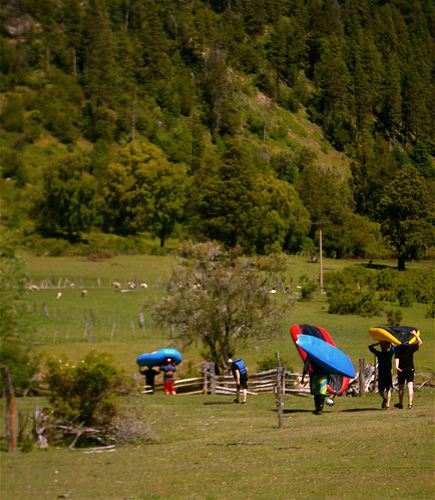 Take out of Confluence section through local sheep farm.

We went outside then, past the parilla (grill), then up the hill to the spa, yoga room, plunge pool, and, at the very top, the hot tub. Shea showed me some of the mechanical rooms, and he explained how a small scale hydroelectric turbine powered the whole place, along with a methane processor that transformed waste materials into gas for cooking.

We didn’t go out to the fields, but Shea explained how guests were served food that was all produced here locally.

They also hosted WWOOF volunteers at different times during the year. There were two volunteers here now, both improbably beautiful girls from the Czech Republic.

The entire ‘operation’ was obviously something that Shea’s family had put decades of learning, experience, vision into. It was a working example of land-use, food production, and integration of local (and worldwide) communities and economies, all based on an ethic of environmental stewardship and sustainability.

Next we stopped at boat shed. Shea was taking down a Necky Chronic; I grabbed a Wavesport ZG + gear. (The rest of the crew would be taking down a high-performance raft called a Mini-Me).Then we waited for the Manuel and Omar to get back from running shuttle (they were leaving one of the trucks down at the takeout and coming back on a motorcycle). 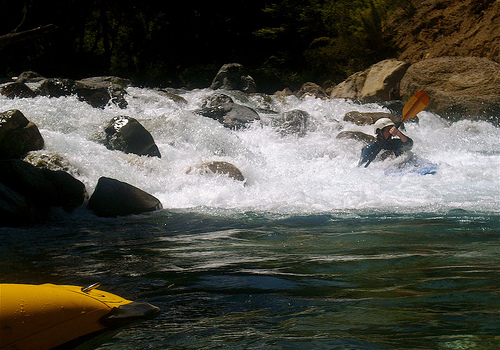 While we hung out on the porch, Claus asked me the series of questions that inevitably ends with “why did you move down here?”

“Es una cosa cultural. It’s not that we don’t like the US. It’s just that there’s something down here about the culture.

Take this for example. Two days ago I called up Cristian Ferrer [owner of a rafting operation on lower section of river]. I called him de la nada (‘out of the blue’) and told him I was a paddler who’d just moved to town and was hoping to meet some other boaters.

He was like ‘che, I’m heading into town right now, let’s meet up.’ And so we did. He invited me back to his house, and to go paddling that day. That’s how I met Shea and Omar. Then you guys invited me here. It was all one flow.

It’s not that this couldn’t happen in the US, but it’s just different. People back there have a million things to do. They need to check their calendars. They need to ‘check your references’.

The idea of operating on flow and buena onda still exists, but it isn’t part of the culture like it is here. People schedule dates for their kids to play with each other. We just wanted our daughter to grow up with a different onda.”

Claus nodded and looked at me in a way like he was really listening, really hearing this. I thought for a minute how strange it would be if the roles were switched, if I were back in the US listening to some Argentino explaining why he moved there.

A few minutes later Manuel and Omar came back and then we all suited up and carried down to the water. I couldn’t quite believe how, if you stayed or lived here, you could literally just wake up in the morning, whip up some breakfast, check the internet for a while, then walk down the stairs and go boating in water that was pure enough to drink. 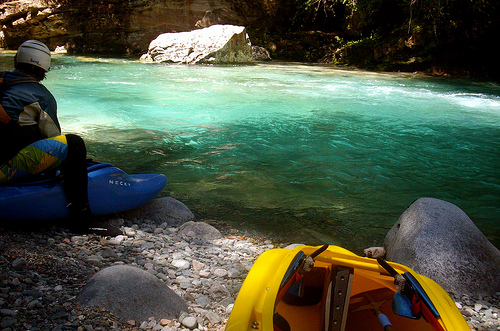 Put in at Rio Azul. Water is totally potable.

On the beach, riverside, the raft crew had a safety talk while Shea and I got in our kayaks and ferried back and forth between two eddies. The river was clear and cold and different shades of blue and green that flowed through the Baldivian (mostly species of beech trees + cypress) forest.

I cupped my hand and drank right from the river, a first. Totally savoring this, a new home river. A new local crew. Stoke is an immediate feeling. Gratitude is stoke sustained. Somehow I was feeling both as we peeled out from the eddy and floated down to the first rapids. This was only the beginning.

Additionally, Shea’s dad, Mark Jordan is a co-creator of the exceptional CIESA, an ongoing educational and research project focusing on sustainable agriculture in Patagonia.

Tagged
Narrative Argentina
What did you think of this story?
Meh
Good
Awesome