AHAB GOT MORE THAN he bargained for. Up from Boston for the weekend, expecting nothing more than a mild hike, he ended up slogging through wild blackberries, stepping in fresh moose shit, and nervously bypassing NO TRESPASSING signs that had been posted by a certain Col. W.T. Willis.

We heard several gunshots while hiking in the Lowell Mountains, not far from the first muddy ruts and fresh cuts that marked an area of new road construction. There was also a thunder and lightning storm, which coincided with a few bars of cell service on Ahab’s Droid. Ahab had wanted to get off-grid, but he used the signal to call his Brazilian girlfriend, who was partying in Rio. I gave him space for the phone call and hunkered down to eat half a loaf of zucchini bread, but quickly grew bored and backtracked to find my friend crouched under a moose maple and slowly enunciating: “Yo amor vose. Yo respect vose. Entendes?”

For Ahab, a newly minted lawyer who grew up on Martha’s Vineyard and lives on Beacon Hill, the whole experience of hiking the Lowell ridgeline was challenging. “This is going to end badly,” he said at one point, in between slips down a waterlogged skidder track. “I’m getting dirty.” 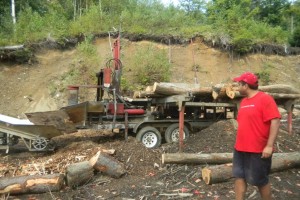 We were hiking the day before construction began in earnest on the Kingdom Community Wind Project, a big undertaking that is controversial in northern Vermont, especially in the towns of Lowell, Craftsbury, and Albany. The project has divided towns, neighbors, the Vermont Democratic Party, and – not surprisingly – the local environmentalist community, which, this being Vermont, is both large and well armed.

Ahab understood that our hike was a journey designed to better understand the impact of the Kingdom Wind Project. His perspective was thoughtful and reasoned. Asked for an opinion while carefully navigating a morass of steep bedrock and mud, Ahab sighed:

Eventually we reached a point where slim, blue plastic sap lines ran up a skidder road and hooked into sugar maples. As we followed them downhill, the lines increased in diameter and entered an old sugarhouse, where they transitioned to a single large, black tube that terminated in a clearing where a skidder, a firewood splitter, and a child’s ATV were parked. 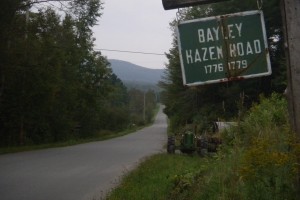 For the most part, our hike in the Lowells had traversed roads – gravel roads, logging roads, and skidder tracks, along with the occasional moose path. Most of these tracks were mucky after the preceding week of rain – the Great Flood of 2011 – which turned much of the state into a major disaster area. In fact, the Vermont Agency of Natural Resources had issued the final permits for the Kingdom Wind Project only a few days before its offices were wiped out by floodwaters. The energy company, Green Mountain Power, had been chomping at the bit for those permits to come through, and as Ahab and I trudged through the skidder ruts, I wondered if this flood might delay the regulatory process just long enough for the wind project to get shelved – a sort of Biblical injunction as the mountains and rivers of Vermont refused to be tamed. Perhaps the very last water quality permit for the Lowell Wind Project had been swept from a desk and vanished in the flood, as state officials did their best to save the most important things.

Just for kicks, I left a Syrian coin on a rock by the skidder, hoping to confuse the heck out of Homeland Security and add one more glimmering wrinkle of mystery to the Lowell mountains.

It wasn’t until Ahab and I emerged in a field near a large, new house that the view opened up to reveal the peaks across the valley, and I realized we had descended the wrong side of the range. Ahab and I were scratched-up, tired, and running low on food and water at this point, so we continued to descend. 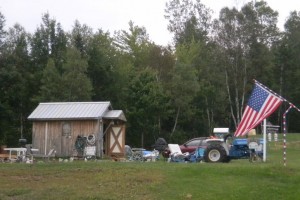 A paved road ran through the valley, and we followed it downhill to a dairy farm, where Ahab engaged in conversation with the cows until they followed us at a trot back to their barn.

A mile further down the road we refreshed ourselves at a farmstand, where Ahab and I bought cucumbers and ate them in large, grateful bites.

Another mile down the road we passed a tiny house, only about 10’ x 12’, perched in an immense and neatly mown field. The property included many lawn ornaments, and a cheerfully decorated mailbox.

For another mile or so the road dropped straight downhill, and while walking we were passed by several trucks. “We could be walking and walking for miles,” commented Ahab.

Eventually we reached a main road, Rt. 58. A general store beckoned just a few hundred yards away. “How far are we from the car?” asked Ahab. “About 15 miles,” I said.

I told the young woman behind the counter that we had hiked over the Lowell Mountains from Albany, and were now a bit lost. “Wow,” she replied. “I don’t even know where Albany is.”

Ahab and I bought beers, chips, and sandwiches, and retreated to wooden steps under the eaves of a bowling alley called Missisquoi Lanes. The bowling alley had closed at 3 pm, and it was now past four, which was a shame, because it advertised a lounge.

After we finished the food and beer, a kind man named Gary agreed to give us a ride over the mountain to Irasburg. Gary owned the general store adjacent to Missisquoi Lanes, and lived in a lovely new house on Irish Hill Road, near the farm where Ahab had talked to cows. He confirmed that construction on the wind project would start the next morning, and pointed out one of only two remaining round dairy barns in the state of Vermont.

In Irasburg we began walking south on Rt. 14, and took turns hitch-hiking. Ahab reminded me to walk backwards, presenting my friendly face to oncoming cars. After a while a large old van came rumbling down the hill, and I knew we had a ride even before it slowed down.

The van was outfitted with plush brown seats and a thick maroon carpet. Corey, the driver, had bought it cheap in New Jersey. He was just driving down to the store, but as we talked he agreed to give us a ride up Shuteville Road in Albany, where we had parked my parent’s Subaru.

There were sketchy houses on Shuteville Road, rundown dwellings surrounded by junked cars. Corey dropped us off where the gravel road turned into a logging trail, and we trudged up this road to where I had parked, just before the NO TRESPASSING signs.

We were tired, but still had enough energy to end the day at Parker Pie, where we ate the Green Mountain Special and watched the Weather Channel. A meteorologist warned of more flash floods.