01:00 May 5, 2020
Top Countries
Top CitiesView All Destinations
Trending Countries
Trending Cities
Load More
How do you reconcile following your flow away from family and friends and into a totally different place where you have to relearn everything?

AFTER 6 DAYS I feel like I know at least where the sun rises.

This time of year it comes up over the northern flank of Cerro Piltriquitron, just north of the most jagged comb ridge.

Arriving in a new place there’s that need to ubicar, to locate, and not just external things like where they sell homemade bread or empanadas or bed sheets, but to actually be ubicado, to feel yourself located in the place.

For me it always begins with place names and terrain features of the surrounding foothills and outlying ranges, any water–rivers, oceans–as well as prevailing wind or weather directions. In places where the urban or suburban landscape is so sprawled that none of these landmarks are available (Buenos Aires) getting located seems more an act of trust.

Yesterday was Thanksgiving. I woke up in a semi-funk, a new reality seeming to set in that (a) in all my time traveling (probably 3 years combined) I’ve never really thought of myself as an ‘ex-pat’ but I sort of felt like one now, and (b) I have no real emotional reference or precedent for any of this. My default reaction was to head up into the mountains. 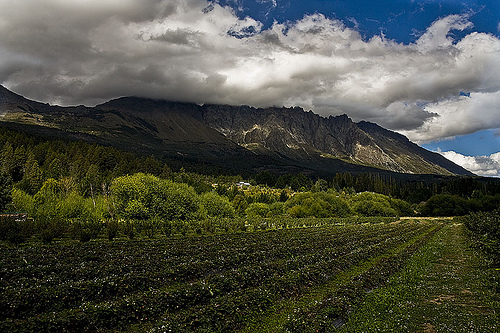 I took the road past our land then cut north on Camino de los Nogales. This is the most desirable land in all of Patagonia, and chacras, or farms (most of them organic) run along both sides of the road all the way to the foot of Cerro Piltriquitron.

Except for the Caranchos (Polyborus plancus), these kind of South American hawks that have wings shaped like condors’, there seemed to be no movement or people anywhere. I realized it was siesta.

Up the road were broad fields with rows of raspberry bushes and hops for the local breweries. All along the edges grew lupine and other wildflowers. It was hot enough, finally, that I took off my polypro shirt and moved under the shade of the Nogales (walnut trees).

After a while I found a horse trail which veered away from the road and along a forest preserve. At one point I saw movement, which turned out to be two horses. One had his head down feeding, then raised his neck up and transfixed me with ultra pale blue eyes. Then they both disappeared into the woods.

Another 10 minutes of walking and I found an easy place to duck through the fence wires. This wasn’t necessarily the high mountain access I was looking for, but then it seemed like this hidden patch of woods was actually better–out of the sun, out of view.

When I’m feeling depressed it helps to temporarily disappear (ideally inside a wave but that’s a different story), and I realized that in some ways this was as off the map as I’d been in a long time. In what guidebook or any book was this little patch of native Cypress forest?

In what guidebook or any book was this little patch of native Cypress forest?

Later I walked back to town and bought a couple folding chairs and my own little Thanksgiving dinner, a thin carving of bife de lomo with mashed potatoes, which I intended to prepare later with emotionally bolstering doses of raw garlic, fresh parsley, and Malbec.

That evening I was on my pre-dinner wine-stroll through the neighborhood, trying to get a good picture (seemed impossible), and on the way back, there was the moment, finally, where I officially met all the kids who live next door (13, somehow all under the ages of 15).

The way you interact with the local kids in a new place is probably the single most important (and revealing) situation you face as that privileged mofo now living in their neighborhood. No psychoanalyst or therapist can ever give you a more honest or dead-on assessment of who you are than the kids who seem to be playing all day in the dirt, but actually have their eyes on you all the time, and see through fronts. 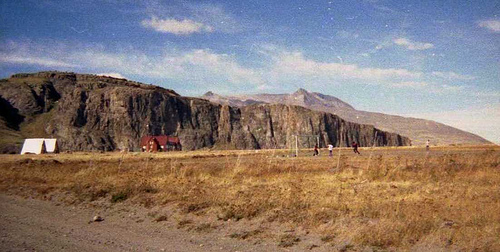 Anyway, I had a cup of wine in my hand. The whole crew was in the area between our two houses, the two oldest boys with a soccer ball. One of them saw me coming and meant to get out of the way but then realized I was actually coming for the ball.

He tried to dribble past me then but I shot in and got the ball (saying something which came out, I think as, Huaa!) then dribbled around in the dust holding my wine-cup above our heads (both of us laughing) until he, of course, got the ball back. Little dude actually had on cleats.

“Wine,” I said. “Today is a holiday where I’m from [this seemed like a good justification] Thanksgiving.”

“Where are you from?”

The whole circle of the kids closed in then, three other boys, and four girls aged from 5 to maybe 10, each carrying on her hip a different dirt-faced and hugely-smiling baby.

I simultaneously thought (a) if only I could take a picture of these faces right now, of how stoked they are, (b) if my mom saw the picture she’d probably see first how dirty they are and then every other potential emotion / perception would likely be blocked out except for fear and anxiety over my choice to come down here, and (c) how stoked is Layla going to be to meet this crew?

The girls wanted to show off the babies to me. The boys wanted to know if I had a car (I pointed to my shoes.) I explained to everyone that my wife Lau and daughter Layla were coming next week along with our fat cat Lulu and our dog Julio.

I asked about their dogs, which one was the most bravo, and then as if on cue there was some kind of movement in the bushes down the street and all 3 of their dogs took off with their cat taking the opportunity to escape out the back of the yard. Immediately all of the boys started hollering and running after them.

After this I slid back home and skyped my parents for Thanksgiving. The stoke level which I had guarded rather shakily all day seemed to evaporate instantly as I listened to my mom’s plaintive voice describing the ‘concert’ performed by the cousins’ kids. It wasn’t that I didn’t want to listen to that, it’s just that the questions we should’ve been asking each other–how are you–were caught up somehow, unable to flow.

I know they’re suffering because to them I’m no longer ubicado. Seattle was far away from Florida but still essentially on the map. Patagonia is an abstract concept, someplace unimaginably distant (even if it’s not), even though we’re still talking right there on the phone.

The Sun is past morning angles now, high over the valley, although this house has yet to warm up. To locate and be located, not off in some dream or illusion but right at ground level, wherever you are when you finish reading or writing, wherever you are when you fall asleep or wake back, blinking there for a few minutes as you look out your tent or window: you just want to keep telling yourself, your family, everyone, “Don’t be afraid, be stoked! This is all of us together, just moving downstream, you see?”

How do you reconcile traveling in totally different directions than you your friends and family? Please share your thoughts in the comments below.

Tagged
Narrative Argentina
What did you think of this story?
Meh
Good
Awesome