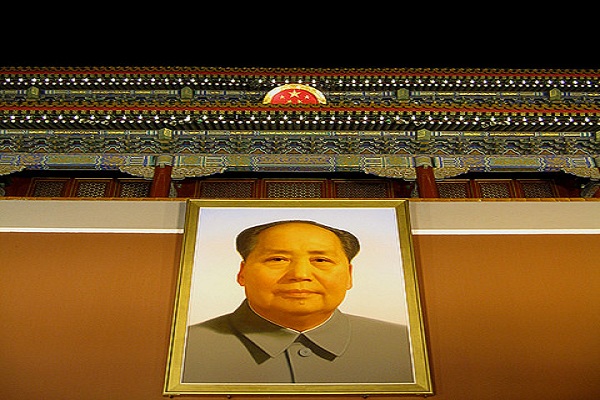 In which Noah Pelletier is cut in front of by various elderly Chinese, ushered around by a young hustler, and ruminates on the juxtaposition of Tiananmen Square, Mao Zedong, and people’s bodies.

I DIDN’T SHOWER when I got up. I parted the shades and threw on the same damn pants I’d been wearing all week.

Our room overlooked a tin-roofed village, and a narrow hutong converted into a row of storage units. The morning sky was orange like a tarp thrown over all this. I thought, today’s the day. Before long, I’d be waiting in line with thousands of other tourists to see the body of Mao Zedong. Last night, Takayo and I were sitting on the bed drinking tea when I told her that we should go.

As I went through my morning routine, perhaps it was that dusty shade of orange, but I imagined us as an old Chinese couple: My wife’s clothes draped over the chair; my paper slippers with black socks; last night’s tea still sitting on the desk. This illusion faded when I zipped up the fly of my J Crew slacks.

I slipped out the door with Takayo still snoring.

I emerged from the subway on the south side of Tiananmen Square. There were no trees, nor benches made of trees. Every building exuded power. The famous poster of Mao was a thousand steps ahead of me on the north end. In that vast space in between, one particular event seemed to dance on the wind.

I walked toward the mausoleum, a beige stone-pillared building in the middle of the square. Far from decadent, if it were anywhere else in the city, it could easily be mistaken for a gym or public cafeteria. A line was already beginning to form. I was about to fall in when a boy approached me. 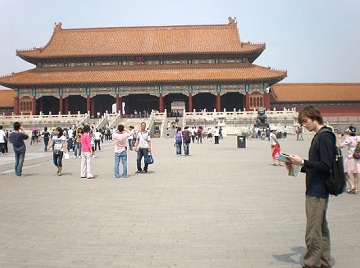 Standing in the Forbidden City

“You have camera?” He said, pointing to the bulge in my pocket.

He motioned for me to follow and took off in the opposite direction. Instinctively, I darted after him, then stopped. Good God, I though. What am I doing running after this kid? I considered ditching him, but he turned, saw me standing there, and backtracked.

I sprinted after him toward a building which looked like a ticket office. There were hundreds of folks lined up, handing over their possessions: Purses, backpacks, shopping bags. The boy brought me to a window at the front of the line. Nobody disputed him.

“Your camera,” he said, pointing to the lady behind the counter.

Something was telling me not to, but I handed it over anyway. The woman gave me a round plastic disk that said #23. I was going to walk back to the mausoleum, but the boy wasn’t finished with me yet.

“Come, COME!” He bolted back toward the mausoleum, and fast. Dodging tour groups, workers, and who ever else was in the way, I chased that twelve-year-old boy through Tiananmen Square. This chase stopped at the end of the line.

“Yes. Ten kuai, please.” He tapped his index fingers together, making a 十, the Chinese hand sign for ten.

“Ten kuai? I don’t know, sounds more like five kuai to me.” Negotiating is a part of life in China, but apparently not in this situation. As soon as I said ‘five kuai,’ I felt like a serious cheapskate.

The boy gazed off, looking very wise in spite of his age. He tapped his index fingers again. “Ten kuai.”

I forked over a ten and thanked him. “Xie, xie.”

With a half-mile of folks standing side to side and butt to loin, a woman in a plaid shirtdress filed me back with her cane. It seemed unintentional, and at the time I thought nothing of it. But the folks behind us smelled blood in the water. From that point on, whenever the line made a leap forward, members of a senior tour group took turns jabbing me in the ribs. When I looked left or right to see who it was, someone else stepped ahead of me from the opposite side. I tried to hold my own, but the challenge only made them more brazen. A man with a perfectly-formed rattail growing from his chin mole stared up at me.

A man in a navy sweater studied my passport at a checkpoint. Security hustled us through metal detectors. I overheard one girl pleading “I’ll keep the camera in my pocket, I promise.” Armed guards ejected her from the line.

There was a shack fifty yards from the entrance selling white roses for 15 Yuan apiece. Folks would break out of line, buy their flower, and then scurry back over. The rest of us just stared at the people running back and forth with flowers. The time for line-cutting had passed, so there wasn’t much else to do.

The entrance was a stately memorial hall lined with olive-uniformed guards. Hundreds of white flowers surrounded a marble statue of Mao, centered in this high-ceilinged room. Mourners would walk over, place their offering at his feet, and bow three times. Some had tears in their eyes. One man returned from the altar weeping like an unhinged father of the bride. The rest of us kept moving as the white-gloved guards urged along.

The government needed something that would both protect Mao and be suitable for viewing. Aftershocks continued to rock Beijing up to the finishing phase of the project. In these events, workers reportedly hurled themselves atop the crystal plates, using their bodies as human shields against falling debris.

We shuffled past the statue deeper into the building. The yellow marble walls of the corridor closed in, and the feeling became more intimate. There was a sign, like all official buildings in China, advising us: BE SILENT. The silence sounded like shuffling feet, one oblivious talking man, and cell phones switched to vibrate. The passage opened to a room divided by a glass wall. Behind it, Chairman Mao rested beneath his crystal sarcophagus.

The history of that crystal coffin dated back to 1976. The process of annealing crystal was unfamiliar to the Chinese government, so they assigned secret projects to factories throughout the country. This project took place in the wake of the Tangshan quake, which crumbled buildings and claimed hundreds of thousands of lives. The government needed something that would both protect Mao and be suitable for viewing. Aftershocks continued to rock Beijing up to the finishing phase of the project. In these events, workers reportedly hurled themselves atop the crystal plates, using their bodies as human shields against falling debris.

Their hard work paid off. Mao looked mighty comfortable, resting his head on a magenta pillow, with a communist flag blanket tucked snugly about his chest. Two guards stood behind the Great Helmsman, staring straight ahead next to two potted evergreens. Despite the room’s vastness, the wood inlay on the back wall created a warm unfussy space, as opposed to that “over-designed” look one might expect to see in a tomb.

Mao was wearing his patented boxy grey button-up. The line slowed as folks took it all in. We bumped into each other, rubbernecking for a better glimpse. The guards quietly urged us along. As I studied his face – those tightly scrunched eyelids, his puckered lips – I am a little embarrassed to mention that he looked like a man whose last words were “And now, you suck the lemon.” Some say he looks waxy. Others have described him as orange. The one certainty is that when the soul exits the body, the result is haunting.

The line emptied into a souvenir shop. The sudden brightness restored that carefree spirit to the people. As soon as I was out the door, a woman shoved me aside in her quest toward a cigarette lighter display. After dusting myself off, I browsed through the kitschy items and bought a fountain pen with a red faux-leather sheath for ten Yuan. I stuck it in my pocket and walked outside, wondering if my camera was still in slot #23.

As an American, I couldn’t help but wonder how folks back home would react to having a president preserved. How would it affect the people’s mentality? Like all National Monuments, the experience lies in the details. A Presidential Mausoleum, as I see it, would be in the Heartland, one of those big, empty square states like Kansas. There’d be a seamless metal cube rising up from a field of tall wheat. No bags, cameras, or cell phones would be permitted inside; just a line of empty-handed people, moving toward an indefinite experience. Of course, I don’t see this happening any time soon, but perhaps future generations will expect a deeper commitment from their leaders.

I handed the woman my disk, and she brought my camera right over. I could hardly believe it.

“Er Shi kuai,” she said. That meant twenty Yuan, or around three dollars.

“How about ten?” I said, tapping my index fingers together.

She dismissed my offer as if she was shooing away a fly. I pulled a crumpled bill from my pocket, considered Mao’s face, and then handed it over. The sun was high overhead now, and that famous Beijing haze loomed over the city. I headed back down into the subway with the image of my wife’s sleeping head fixed firmly in my mind.