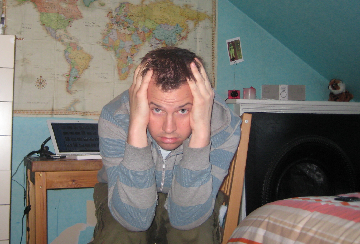 The author. Not pictured–sticky notes above map.

My bags were greeted at the airport by two adorable drug dogs. They had taken to treating the carousel like a ride at Disneyworld, sitting on the conveyor belt for minutes at a time, pretending to sniff bags but really just slacking off.

I knew where the dogs were coming from. I went to Chile knowing that this was the moment I would really have to start writing a book, which was a rotten feeling. Little notebooks would have to be purchased, little notes would have to be inserted into them and little me would have to make sense of it all.

With this in mind, I did exactly what all writers do. I came up with distractions to put the process off even longer.

The first came in the form of a physiotherapist from The Netherlands, a man so in shape that I couldn’t even be attracted to him, knowing that if we got naked together I would simply leak fat onto his perfect frame.

Michael told me over a traditional Chilean meal why he was traveling. He had gotten into his career because he wanted to help people, realizing too late that his job would really consist of covering doctor’s asses against malpractice suits and filing paperwork. 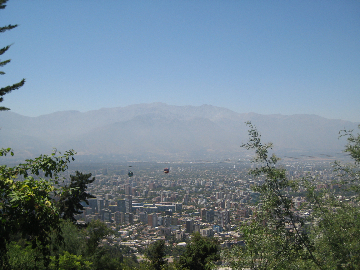 He was taking some time off and trying to figure out how to actually help people, with the possibility of somehow working with war veterans. He threw it my way in plain clothes. “I am too young for this bullshit.”

Next I met up with Robert, a photographer originally from DC, who had started an entertainment-based English website in Santiago.

Robert had also become disillusioned with his job in America, which had something to do with Economics (not exactly a “party” career to begin with). He moved to Santiago and began taking pictures, mostly of student protests. His head was quickly split open by a rock, an event that he talks about the way some people talk about a delicious lasagna.

Cathy, a fellow travel writer, asked me to consume large quantities of beer and French fries with her. I accepted only because it was a foray into the culture of Chile, not because I follow French fries around like a cartoon character that drifts through the air after smelling a cooling pie.

Cathy was rather gorgeous and had men eyeing her from three picnic tables away. I attracted only the attention of those aghast at the amount of potatoes I could consume per minute.

We got to talking about Chileans, and South Americans in general. I brought up how unbelievably attached the couples around town had seemed, hanging from each other and gnashing faces, only seconds after exhaling a shared Marlboro Light. She explained that being attached is en vogue, en masse.

In Santiago, being mounted by a lover in public is a lot like showing off new sneakers or a Beemer.

In Santiago, being mounted by a lover in public is a lot like showing off new sneakers or a Beemer.

The more make-outty you can be, the better for your reputation. It is for this reason that people hang out drinking beer until all hours, devouring Someone Special on the white plastic chairs that always adorn the curbs of the bars here.

I cautiously suggested that women seemed to suck face with a bit of buyer’s remorse, sometimes actually gazing at me while kissing their passionate boyfriend. She confirmed that I was not imagining this, explaining that it seems as if the women adorn the men out of some sort of duty. A woman may have somewhere better to be but it is her job as girlfriend to make a spectacle of their relationship.

The second item on my list of customs had been haunting me since Argentina. Never, in my life on this planet, have I seen mothers fawn over their children so much. It hasn’t been uncommon to see a mother kiss their son ten times in five minutes, even if he is fourteen and wants no part of a PDA.

Once I noticed this trait, I began to recognize that it was sort of creepy. The mothers seemed obsessed with their child’s every move.

My philosophy became that the mothers, who seldom seemed to have a husband in tow, have transferred the appalling affection that their husbands formerly gave them, before the zing went out of the thing. Children solve the problem, allowing for endless adoration. Until puberty when, like I said, the whole thing just gets weird.

Cathy’s take was also interesting. She felt that Americans put too much emphasis on “one moment” for affection (a birthday, a goodnight kiss), making that one moment mean everything in the world. The South Americans, she suggested, have completely flipped this premise, choosing a quantitative approach to showing their love.

I headed back to my dorm room, looking for more distractions. The only other inhabitant was a woman who would not stop talking, not for a second. She was about thirty and unable to be in a room with others unless she was chatting, yammering, expounding or cooing.

When others spoke, her eyes grew into saucers of interest, her breath held for the moment that she could pounce into the conversation with trivia about tree sap, Bolivia or meningitis.

Within minutes I was looking for any escape from her conversation flytrap, trying desperately to think of something –anything – that could be important enough to take me away from this lady. It turns out I had the perfect excuse.

I started writing the damned book.

Have a note you’re interested in submitting? Send it to david [at] matadornetwork.com