She come clean from naked country.

She come clean where the land don’t lie.

THE VISIT PHOENIX ad in The New Yorker magazine jolted me. The headline read:

THE DESERT IS A MYTH. DISCOVER THE DESERT You Never Knew.

There was a cartoon—a smug woman with a resort logo embroidered on her shirt stood at the edge of a swimming pool. There were, of course, faux adobe buildings with red tile roofs, a golf course, a golfer who presumably had the resort logo embossed on the head of his club, one standard saguaro, blue sky and a range of featureless beige mountains.

FOUND:
A DESTINATION WORTHY OF YOUR IMAGINATION

LOST:
ANY PRECONCEPTION OF THE DESERT AS YOU KNOW IT

All of this was, in the harshest sense, the desert long past mythology. The Visit Phoenix ad promised: “The desert has never been one to give up its secrets. But, like any great mystery, the deeper you dig, the deeper you are consumed. As the story unravels, great rewards are reaped and truths are told.” Then this: “Amidst enchanting pathways winding through lush hidden gardens…”

I crumpled the ad and tossed it in the woodstove, wished I had an anti-nausea pill, dragged a camp-chair to the edge of the meadow, took so many deep breaths that I hyper-ventilated, and in that super-oxygenated clarity, thought, “I need more than medicine, I need an antidote.”

Some believe the universe is the Ourobouros, a giant serpent who stretches eternally in a perfect circle, its poisonous fangs sunk into the tip of its tail—which contains the antidote for the venom. I am a desert rat and I know the Ourobouros is a desert snake, bones stripped clean by the unbearable, eye sockets staring out into naked country. I have been blessed to dig deep into the mystery of deserts. I have been blessed to be consumed, to give up fantasies of immortality, and whole chapters of what I thought was the story of myself, 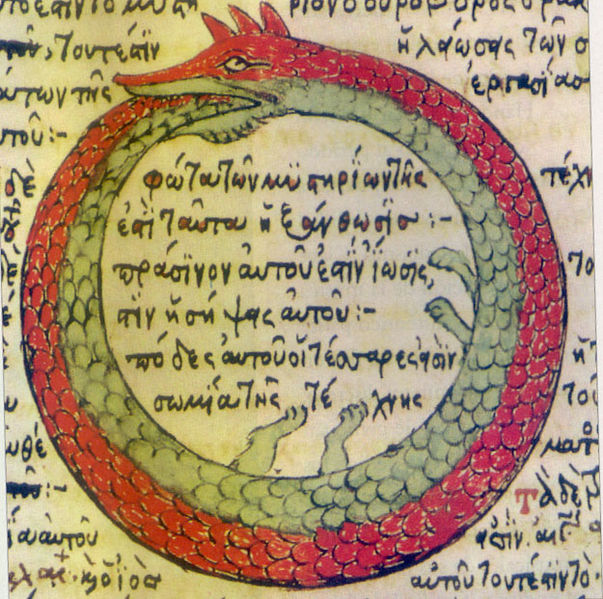 In the Eastern Mohave, the Anza Borrego, the high desert of Wupatki National Monument; Southeastern Utah slot canyons a fraction wider than my shoulders; the Basin Range of Northern Nevada, the Black Rock, the red and tender curves of the Verde Valley, there were, indeed, “enchanting pathways” and “lush hidden gardens.”

There were also talus slopes that can humble you in a skipped heart-beat, basalt outcroppings on which a misstep can leave you skinned alive. There were dirt roads that wound to one dead end, and yet another, and another.

Once, I walked up a shadowed wash somewhere west of all preconceptions. The sand beneath my feet was damp enough to hold a print. And yet, there were no cottonwoods, no brittlebrush, no datura or reeds. What scruffy bushes had once grown at the sides of the wash seemed dead. Their branches scraped and rattled in the hot wind. My companion rounded a curve. I heard him laugh softly.

“What?” I called out. “What?” There had been the time we had found a twenty foot high Buddha painted on a canyon wall above a Sonoran mining road; and the pink trailer behind the crumbling hotel in the Mojave, one flamingo pink platform boot lying just outside the door.

“Walk slow,” he said. “Come around the corner easy.”

I imagined a mama bobcat and her cubs; a jack-rabbit frozen not so much in terror, as wisdom; a wrinkled geezer with a grin, a dog and two flat tires on his bicycle; a geezerette with nothing but a life-time of stories. “Oh,” my friend said, “this is so sweet.”

I came into the end of the wash. My friend looked up a dead-end pour-off. A stream of water no wider than my hand ran steadily down the rock-face through emerald moss and disappeared into the sand. The trickle of the waterfall seemed crystalline. I reached out to the water, and stopped. It was enough to imagine my skin bathed in liquid mineral.

My friend and I walked back in silence. Later there would be hot springs percolating out of a low mound of chalky earth; a warm pond, perhaps four feet deep, bordered by reeds that smelled like young corn; and a few hours west, the aurora of Reno melting up from the horizon. We moved toward all of that, yet needing no more, remembering how, from the road, we had looked toward the black thread of the wash seaming the drab hills. We had wondered what might lie there, and conjectured it was nothing.

Nothing. On a solo trip I encountered that which made me long for nothing. I’d read a book by Arizona rock-hound, Fred Rynerson, about his desert trips at the turn of the last century and been entranced by his description of reaching into an open crack in a rock-face and pulling out a handful of perfect tourmaline crystals.

He wrote of a wooden plank road across what now is the Salton Sea; of carrying not just water, but tires, fan-belt and gas for his Model T. He wrote of the rough mountain town of Julian, of tiny Borrego Springs, and of the sky over Ocatillo Flats, a sky no less tourmaline—delicate pink, green and purple—than the crystals he had held in his palm.

Heading home from a visit with my son in L.A., I followed Fred’s routes. Julian had been charmified, Borrego Springs en-golfed, but the light was fading as I drove down the long hill toward a bone-pale desert and the promise of Ocatillo Wells. The sky was the pure watermelon of tourmaline. I imagined Fred was riding shotgun.

As I drew closer, I was glad he wasn’t. I had failed to see the Off-Road designation on my topo map. It was a blessing Fred Rynerson was no more than a ghost, never to hear the sound of the place, a steady roar that shifted into a whine and back into a roar, as though a spoiled giant was having a tantrum; or to see huge camp-fires on a warm night, sparks showering out into the dry desert; quads and dirt-bikes, painted fluorescent red and blue, ripping into the sides of the dunes; and the words WHITEY AND ROY: RIDGE RIDERS!! 1991 carved into what was left of a picnic table.

The serpent Ourobouros winds round. We are the fangs. We are the tail. We are venom and antidote.

I was too tired to drive farther—and I wanted to give that which my species had made of the place as much attention as I would an improbable waterfall. I sat at the battered picnic table and ate a slice of blackberry pie from the cafe in Julian, watched ORV headlights jitter across the dark till my eyes ached, then crawled into the camper and fell half asleep, edgy about the nuclear blaze in the camp across from me. I heard a truck pull out about midnight, dragged myself out of the camper and saw the fire still blazing. Their fuel was a huge stump and an old cabin door. I had no more than a gallon of water. I let the fire burn.

The serpent Ourobouros winds round. We are the fangs. We are the tail. We are venom and antidote—but the balance is slipping, the circle of loss and renewal is out of true. I wonder when a visitor will sit at the edge of a warm desert pond and believe she will tell no-one about the silky feel of the water and the corn-scent of the reeds—until one night she meets a man and falls in love and believes him to be a keeper of secrets. And, he is—till the word “secret” seems a great oppression.

there is an article in a slick magazine or a hotel hand-out or an airline newsletter. The Ourobouros shudders. And those digging not for mystery move out over the inconceivable desert. What was boundless is measured. What was lost is found.

And the ghost of Fred Rynerson wails on the wind of the land that will never lie.

The ultimate floating tour through Montana, from Yellowstone to Glacier National Park
20 of the funniest idioms for people learning English
30 awesome Japanese idioms we should start using in English
Wildfire burns over 850 acres of Texas’ Big Bend National Park
The truth about artificial vanilla extract (and why you should always splurge for pure)