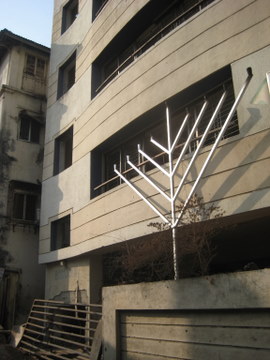 Photo by the Author.

In some places, what can you do except remember?

A gray skeletal hulk in the middle of an alleyway in Colaba in Mumbai South, it is a place that will always belong to the past.

Even on this warm Sunday morning in March, with the neighborhood women in their red and gold saris passing Nariman House with mangos and chapattis, this structure belongs to November. The November of last year’s massacre.

I stand outside the house. It is hot. My body is stone cold. It is all those dark spaces inside the Jewish center, the boarded up windows, behind which the story unfolded that everyone knows: the break-in by the four Islamic terrorists, the slaughter of the six Jews by the terrorists, the slaying of the four terrorists by the Indian commandos.

An Indian man says to me sharply in passing: “Why are you looking? What is to see?” I don’t know what to say. I see an elderly Indian policeman sitting in a chair at the entrance to the building. His eyes are half-closed. His rifle is asleep in his lap. I like that policeman. I feel protected by his harmlessness.

Nariman House provides him with a few rupees and some shade. His gun is ornamental. November’s antidote.I consider the first man’s question. Why am I looking? I begin to see what he is driving at. He wants to forget. By looking, I remember. I am an insufferable rememberer. Chalk it up to my Jewish DNA. It’s a birth defect like a cleft palette. Only unlike a cleft palette, you can’t get rid of it.

Other Jews visit Auschwitz and Dachau. They stand very still and listen, as I am listening now. Maybe if they listen hard enough, creatures of rag and bone, yet enormous in their martyrdom, will float out of the barracks and say the things the listeners are listening for. What are those things?

Maybe if they listen hard enough, creatures of rag and bone, yet enormous in their martyrdom, will float out of the barracks and say the things the listeners are listening for. What are those things?

For myself, I would want to hear the six as ordinary galumphing people complaining about in-laws and tight shoes and the hallucinogenic idols of India.

I am fascinated by who they were before they were bound, mutilated and hatched as immortals in the calamitous tree of Jewish memory.

A few blocks away is the Arabian Sea. I could go there and reinvent myself as a normal tourist. Victoria’s Gateway is there. I could board a a boat and head for the caves of Elephanta. But then I’d be crossing the waters the terrorists came out of that night. It wouldn’t be right to pollute the Arabian Sea with my morbidity.

Please comment on this story in the comments section below. If you have notes to submit, please send to david [at] matadornetwork.com

Tagged
Narrative India
What did you think of this story?
Meh
Good
Awesome

Canada’s Red Mountain is crowd-funded, quirky, and really, really big
21 drinking games you can play in any bar
A big e-bike tax credit may make bicycle travel a lot cheaper, and easier
How to plan a cheap, last-minute vacation to Martha’s Vineyard
Mexico is raffling off one of El Chapo’s safe houses for $12.50