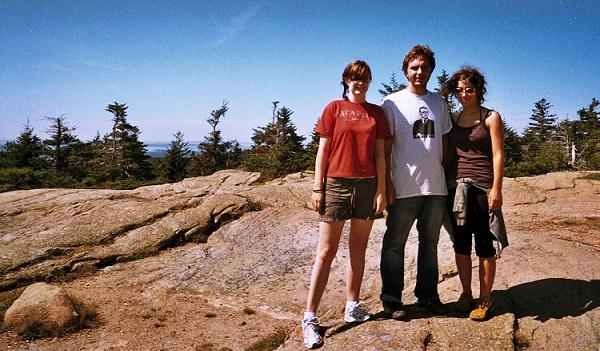 CONNECTICUT: Just a giant forest with nice suburbs. Everything was nice. Looked nice, felt nice. The roads were nice. We stopped at a restaurant to eat dinner. Retired people in their late sixties were sitting at a table. Four of them. All of them looked professional. They had lived the good life. They did, I’m sure of it. One man said, “America is a country of euphemisms.” We ate Greek Burgers. They had feta cheese and olives on them. The burgers were medium and interesting in terms of burgers.

Went to Hammonasset Campground. The ocean was there. There were giant public restrooms on the beach, all brand new and expensive looking. Nothing like that would exist in Ohio. The bathrooms screamed MONEY, Ohio has none of that. The sun was going down on the ocean and we didn’t swim. We looked at the ocean. I imagined an Indian a thousand years ago standing on Hammonasset Beach, I wondered what he saw. It must have looked odd, the end of the world or a terrible monster of endlessness. Then I imagined someone standing in England in 1100 looking off the at their terrible ocean. The difference being that the European thought the world was flat, and the Indian must have just been confused and a little scared.

We pitched our tents and walked back to the ocean. Night had come. We could see the glow of New York City to the south. The glow was immense like there was some strange God living in the distance. Thought about everyone I knew in New York City walking around in the strange glow.

Our campsite was surrounded by very excited Russians with a heap of children. The children were running around speaking Russian.

Woke up to rain pouring down on us. The tents were soaked. Went to Dunkin’ Donuts. Sat and read, drank coffee. It was drizzling. The employees kept yelling, “Donde esta el telefono?”

We couldn’t swim in the ocean because of the rain, so we drove down interstate 1. We stopped at several book stores and bought many books. 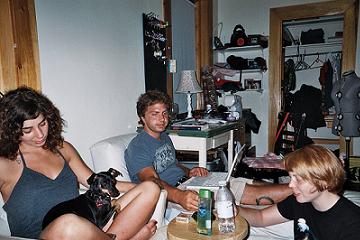 Boston: Stayed at Ellen Kennedy’s apartment for two days. Ellen Kennedy is a strange young poet trying to get a vet-tech degree at a local college. Ellen Kennedy might be the future of poetry or will save the raptor birds, she hasn’t decided yet.

Sat in the Arnold Arboretum Park owned and ran by Harvard in Jamaica Plain. The park has many weird trees from temperate climates from around the world growing together living side by side. The park has tags on all the trees telling visitors what type of tree it is and what part of the world it naturally grows in. In this beautiful park we all sat talking about our colleges and their general education requirements and sexual misadventures.

Went to a Catholic store called Saint Miguel’s for Latinos. The store had many candles. Everyone was speaking Spanish around us. I had just gotten done taking my two required Spanish classes for my major and could understand random words everyone was saying. There were a lot of strange oils. None of us had any ideas what the oils could possibly be for. We asked a man and he supplied a 15 minute long monologue on how if you rub one kind on your hands it makes your boss nicer, one makes tus novios disappear, another makes your have buen sexo. He said that one time a woman came in, took an oil, rubbed her hands with the oil and her abusive boyfriend left her and never bothered her again. We listened and believed him because it sounded fun to believe in oils that cause magic things to happen.

We listened and believed him because it sounded fun to believe in oils that cause magic things to happen.

In an Irish Bar we drank Magners Pear Cider with ice. It was nice. Everyone was happy because Shaq joined the Celtics. The bar had many pictures of Larry Bird.

Another bar: bar had no air-conditioning. Instead of pictures of Larry Bird there was pictures of W.B. Yeats. We sat and drank Magners sweating. We talked and felt in love with life. Life was very good. Bernice was talking to Ellen and they seemed to get along well. My girlfriend Brittany and I were looking at each smiling and feeling nice.

Swam at Gloucester Beach. There were about a thousand nice families swimming. The water was ice cold and nobody could stay in very long. When I went to go get a Chaco Taco a young girl that was extremely pale was being taken away by an ambulance. She looked like she never went outside, did nothing but watch television and eat Doritos and when she finally went outside had problems with the heat.

Then to Harvard Square. Harvard was there, the MONEY and the POWER. We stared at Harvard, the buildings were old but looked brand new. We were all in college or finished and wondered what went in those buildings that was so different from our schools. Ellen Kennedy mentioned that she didn’t know anyone else interested in poetry in the city. I replied that if a wealthy kid was interested in poetry they would go to Columbia, NYU, or Berkeley. The future business leaders, politicians and scientists go to Harvard and MIT. Outside of Harvard sat many black male homeless people begging the rich WASPs for money.

Bukowski’s Bar was a nice place. Charles Bukowski, the writer of poor drunks got his very own bar outside of Harvard. The bar wasn’t full of artsy kids. There was nothing unusual about the bar, it had some paintings of Bukowski on the walls but that’s about all. It didn’t look like anyone in the bar read Bukowski or cared about literature. Just seemed like a nice place to get a drink so people went there. Of course I’m supposed to ask the question, “Would have Bukowski approved?” He would have complained because that was his style. Should I complain I ask myself, no, because Bukowski loved gimmicks, his writing was basically three gimmicks, drinking, women, and horse racing. A bar using his life as a gimmick to sell drinks fits into his philosophy.

Acadia National Park. Acadia National Park is an island that contains a national park and several little harbors where the super rich live. The harbors were full of WASPs, nothing but WASPS, no blacks, Italians, Jews or Latinos, only fucking white people. Everything was expensive, everyone was intimidating. The rich completely controlled the island.

The park was beautiful. On the last day we hiked up Cadillac Mountain, it was not an easy hike but a short one, only nine miles. It was nice because for about two hours of it, we couldn’t hear one noise, smell the garbage of humanity or feel anything related to civilization. But then randomly people would walk by as the day passed. It was funny because the rich people on the island purchased 300 dollars worth of hiking attire to hike,all we had were three large bottles of water and some sneakers.

We stood on top of the mountain. We could see a lot of ocean and little islands scattered amongst the blue. We felt good to be at the top of a mountain.

Take a spine-tingling trip around Stephen King’s Maine
Canada’s Red Mountain is crowd-funded, quirky, and really, really big
These are the prettiest public toilets in the world
Inside Japan’s freaky themed bath houses and bars (NSFW)
30 awesome Japanese idioms we should start using in English