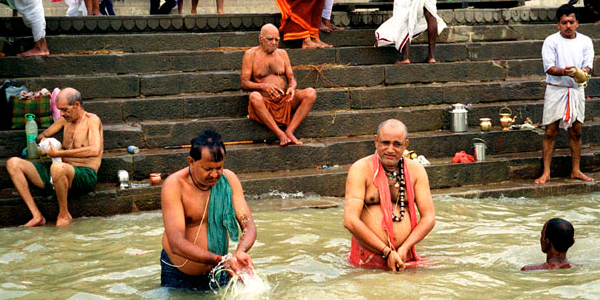 Robert Hirschfield looks at Benares through camera lenses, book pages, and the ceremonies surrounding life and death, no matter if you’re a person or a dog.

Michael, from County Kerry, feeds Runtlin Rimpoche antibiotics through a syringe. The puppy seems unsure whether it’s worth the effort. The steep fan of bones looks bigger than the dog.

We are at the Krishnamurti Center, upriver. Maybe in Benares a dog’s death is also auspicious. When his time comes, Runtlin Rimpoche will not be wrapped in saffron, set down upon logs and ignited. But he already operates in us as part of the death consciousness of Benares.

Sitting up in bed at dawn, I hear the peacocks screeching in the grass. (Krishnamurti is colonized by peacocks.) From the old Shiva temple on the hill across the wall, Vedic chants are gusting into my space.

This is my third time in Benares. I awake to the strange feeling of having been stolen by the timeless from my New York routine of interviews and story deadlines. I open a book by Krishnamurti. He tells me, “In the light of silence, all problems are dissolved.”

The words help. The words don’t help. Judith hides behind the words. Right before I left for India, a cancerous nodule was discovered in her left lung. She never comes with me to India. She has a fear of being disabled by bacteria. An abstract expressionist painter, when she travels, it is Vancouver to photograph the stones and bones on her friend’s island. 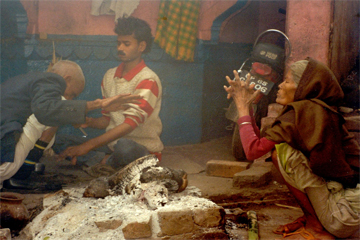 “Sarcomas,” said Dr. Ari Klapholtz, the distinguished pulmonologist who examined her, “are funky.”

This one, like her bone cancer three years ago, originated in Judith’s uterus. An offspring of her leiomyosarcoma, the nomadic cancer that wanders the bloodstream until latching on to a liver, a lung, the bone of a bone-obsessed artist.

I go down the hill to photograph the Ganges. Bathers have gotten there first. The air rings with the sounds of hacking, water slapping. Energy that belies the hour. I am forced to remind myself that the Ganges was once part of the toe of Vishnu, or the brow of Shiva. The accordion of Indian mythology opens lightly around this matter.

The boatmen, gray smudges in the gray light, look up at me from their boats, and ask, “Boat?” I say, “No,” and they ask, “Photo?” “Photo,” I agree, charmed by their deft movement from livelihood to the next best thing.

They pose gravely for me in their worn shawls. They are not interested in my sending them copies of their portraits. Another Indian mystery. Is it possible that just the moment of being photographed is enough for them? That that alone will do? No need to store up and hand down images, maya being maya?

I have given up hoping to turn over a stone and find a spiritual teacher in flower.

That affliction exhausted itself a long time ago. My camera has transformed me from seeker to sought. Boatmen, dhobis, women sculpting dung patties, all call to me, wave me over, want what I have to offer. 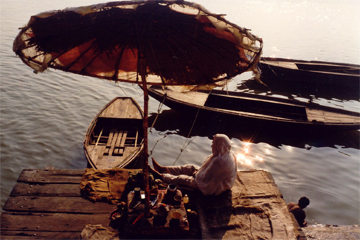 They slow me down. In Benares, foreigners move too quickly, either towards something or away from something, usually the crabbed beggar, the public defecator. Nothing edifying is ever asked of them.

Raising high my Minolta, I catch sadhus with tridents marching past children with cricket sticks. All along the ghats, like roadblocks, are cows the size of boxcars. An Indian magical realist might write: “It took me three days to get around them.”

Obstacles are part of what makes this city holy. Its holiness may be its biggest obstacle. It is harder to get around than the cows. The laurel of Shiva chafes. How much sanctity can one city take?

The heretic in me is pleased when the young man at Nishad Ghat tries to sell me hashish in full view of the Ganges. My first time here, another young man showed me his stash at the Burning Ghat.

I turned him down. He wasn’t happy. 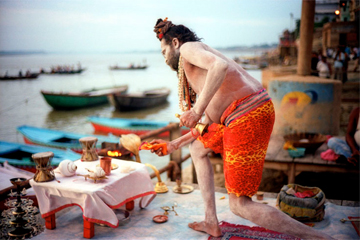 “No photo allowed here.” He rapped my camera with his knuckles. “This is holy place.”

They are the soul mates of the rickshaw driver, who while trying to cheat me, offers to find me a prostitute, as I am a man alone in Benares. I don’t photograph him, even though he is a souvenir of sorts. A resident of the city who has forgotten its story.

Or if he remembers it, he’s banished it to an island inside his brain, where it is kept in quarantine.

Cutting through a slum by the Malaviya Bridge, the corner of my eye is assaulted by a ferocious ochre glare. A holy man is looking into a mirror, getting himself ready for the day. Dipping his fingers into a bowl of ochre paste, his brow bends to receive its trident.

I want that shot. The mirror is the key. It echoes the fastidious lady in New York, getting herself ready for the day. But my courage fails me. I don’t want the sadhu to think me crass.

The image I leave there on the ground tumbles around inside me like a hungry ghost larger than myself.

I try to stay away from the Burning Ghat, gaudy with death for all its holiness. I used to spend long hours hypnotized by the fires, the circling of families around the fires, lost in the steps of their slow ancient dance. What moved in me as they were moving? 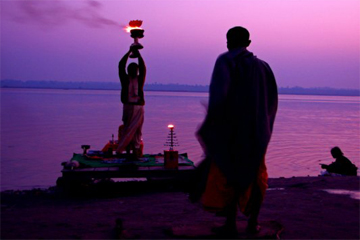 What dance was I doing? And to what music?

When I find myself, as I do now, amidst the hive of temples, the racks of logs, the acrid plumes of smoke that burn my eyes, I am chastened by the dislocating sameness of the place. Why does nothing here seem to change when change is why this ghat is here?

From the rise above the clearing, a corpse, newly torched, is spitting flames into the living air. It came mummy-wrapped in saffron. Who? I wonder. In India, I always wonder, “Who?” to avoid being sucked into the what of human free-fall.

Judith shakes herself out of a deep sleep to shoot me a cross look from her end of the earth. Are you looking for the meaning of death in red flames leaping like circus acrobats from saffron bundles? Or are you just bored?

I return to Krishnamurti, where the Varuna River empties into the Ganges. India calls holy any confluence of two rivers. Bathers in dhotis are wading out to where the rivers meet. I take a photo and think of Judith. I think of her two rivers.

Yemen is the world’s worst humanitarian crisis, but we can help 7 countries you can’t enter if you have a DUI These destinations are opening to US tourists this summer Portugal will not be welcoming US travelers after all This Italian village is offering visitors free accommodation this summer

On PowerBars, lepers, and parade-stopping in Varanasi

Notes from a photographer in Varanasi, India

My days at the Ganges cinemaplex

Ideal places to watch a sunrise/set