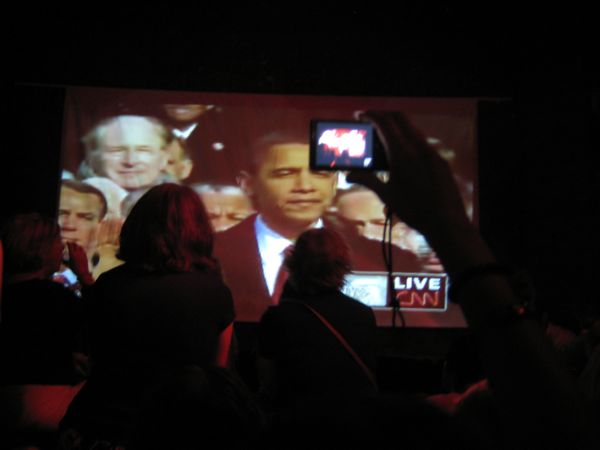 Crappy photos by author, who had had a few cocktails by the time he got to snapping.
Editor’s note: Four years later, Tom Gates recounts being abroad during Obama’s inauguration.

THE EXPATRIATES of Buenos Aires all came together at a club called Sugar, for the purpose of seeing Barack Obama sworn in as the 42nd president. The dive-y club in Palermo was having a Moment, having marketed their venue as the only place to see the event live, with superior sound and on a big screen. As it turns out, the operation was really a jerry-rigged computer projector with a herky-jerky picture and intermittent sound. 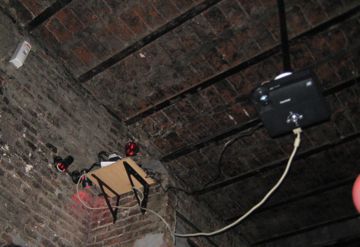 Anderson Cooper’s normally competent voice came through at intervals. “Arriving in the. And here you can see. For which we have all been waiting.”

Nobody seemed to care that they were watching the event on a setup that rivaled those found in most adult movie emporiums.

The room was filled with people who all had one thing in common; they had fled America, short term or long term. A majority of the permanent residents seemed to have left post-Clinton, none of them imagining then that they would eventually bump into a president who promised to unite the country, if not the world. They were Bush-haters, thrilled to have a big ‘ol target on which to blame their problems.

“America went the way of chain restaurants. It was McAmerica,” explained Bill, a former engineer from Georgia, who was slurping down an ethnic meal consisting of a Budweiser and chicken wings. He then broke into a diatribe I have heard many times. It involved him recalling things that he remembered before the United States had gone tits-up, things that were placed memories, romantic visions that existed for the purpose of justifying his geographic displacement.

Imagine, for a minute, an antique Coca Cola vending machine. The old-fashioned kind that dispensed small, adorable bottles for a nickel. We’ve had this image placed into our brains mostly through advertising, or at least from a film studio’s clever prop department. It is an image that feels incredibly American — an image that reeks of small-town comfort.

The truth is that you may have probably only run into a handful of these in your life, most likely in a setting where they are intended to be flashback-y and kitsch. You’re not foolish enough to believe that the world would be transformed if we could still plop down a nickel for a miniature soda. 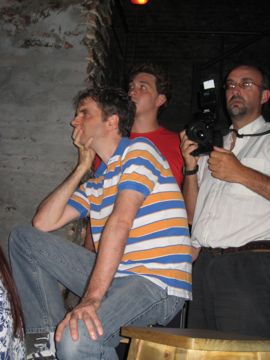 But I really think this is the deluded, romantic vision that guys like Bill are holding onto. He needs to think the Coke machine is still important. He left America in search of things that never even really existed in his life, things that he had convinced himself would make him happy. Bill wants a nickel coke and instead he’s gotten Barrack Obama.

I recently had dinner with a former New Yorker, who is now living in Buenos Aires. He rolled his eyes as he explained that many expats were thinking of returning to the USA now that Bush was leaving office. As I began talking to more folks at Sugar, it indeed seemed this way.

Barbara left home after her husband cheated on her, leaving her a stockpile of cash awarded by an “ass-kicking judge.” In Argentina she found that her money went further, that healthcare was cheaper (often free), and that she could make money by fact-checking for a US-based company.

Now, she said, things were changing. Inflation was approaching 35% a year, and little things were starting to nag at her. “I miss salad dressing. I know that sounds stupid. But they don’t make it here — you cannot find a bottle in the grocery store to save your life.” Obama and blue cheese were promise enough for her to consider a move back to Kentucky. 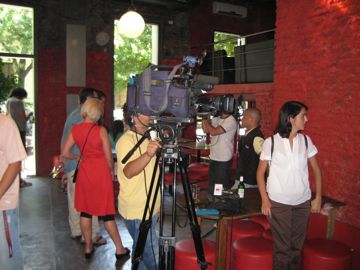 News cameras were present, looking for easy pickup shots they would use to cut into the nightly news. Several seats were reserved for journalists — men in sandals and jeans who ate nachos with such ferocity that I could only imagine their first below-the-belt encounter with a female.

Behind me sat the two girls that I’ve been trying to avoid for all of my traveling life; sorority sisters from Tennessee. Their voices are always impossible to block. They mix eloquent words from AP English class with idiocy. “This is like, so monumental. All of my African American friends are like, so proud.”

The telecast proceeded mostly as I had anticipated it would. There was hissing when George W. Bush was announced for his last puzzled-looking shot as a president. The crowd’s fury turned to pandemonium as Obama made his way to the screen. It felt more like watching Hulk Hogan enter a wrestling ring than it did a president approaching a dais. Then, thankfully, there was silence as he was sworn into office.

Their quality of life had improved, but they had traded their American soul in return. These were people who were constantly looking to justify their decision and maybe, just maybe, the man on the screen in front of them was going to make America a better place than where they currently sat. Which would make them very wrong about many things.

It felt like they all secretly wished it hadn’t happened.

Tagged
Activism Narrative
What did you think of this story?
Meh
Good
Awesome