View all travel news
Top Destinations
Top CitiesView All Destinations
Trending Regions
Trending Cities
Load More
Without language to claim an identity, you take on strangerness. You become whatever the people you encounter decide you are.

MORNING IN ATBARA, Sudan, strikes fast and dry. Today I wake up in a minimalist hostel somewhere in the bowels of a dirty, mostly constructed building. The television at the end of a cramped space with three other saggy beds watches me silently. It’s missing its entire lower corner — the cathode ray tube hangs in warm air.

I’m quick to pack. Toothbrush in toiletry bag. Toiletry bag in backpack bottom. Sleeping bag crushed, not rolled. Into the bottom as well. A little to the side. Yesterday was a day for exploring and today will be a day for moving. Moving on. Moving away.

For the last 50 mornings, every one has been one of the two — either spent exploring as much as possible in the few days I have in a place, or packing and climbing on a bus or a train or anything with wheels to watch it recede behind me. It’s an efficient way of traveling, particularly when your time is tight and there’s so much ground to cover.

Moving day. Exploring day. If there is time or a delayed connection, then another exploring day. Then moving on. Efficient, yes, but it keeps you a permanent stranger — someone around long enough to see, but never to begin to understand or be understood. That usually takes a great deal more time and conversation. Something more than a simple exploring day.

I’d explored this town, Atbara, Northern Sudan, yesterday. Like a ghost, unable to communicate. A stranger to the Arabic conversations in the markets. Ordering dinner with hand signs and a smile before drifting off to become lost again in the wondered meanings of a dozen conversations I could only watch from a distance. Like much of Sudan seemed to be, the streets of Atbara keep their secrets to themselves. Language is a key, and I don’t have it.

My only links to understanding, to existing as more than a ghost made flesh, is my handful of Arabic.

Backpack on back. Keys left on the front desk in the room where the once-white paint flakes from the dry walls. Smile at the youth behind his tired managers’ desk. “Shukran,” I thank him — quick to leave before he replies. I felt like a novelty to him yesterday. Not from “Amreeka,” as he’d asked. Expected. I am a South African — “Janoob Afreekya.” I’m not sure he believed me at the time, giving me that smile that suggested I must be mistaken. Until I gave him my passport to enter into the guest register. For all my strangerness, that little green book defends the outer limits of my realm. I have a home somewhere. A place I can return to. I am not from Amreeka.

Outside, the bus is comfortable. Seats covered in the dry red velvet you might see on old furniture at your gran’s house. I find a seat early, repeating “Abu Hamed” to the conductor like a simpleton. Abu Hamed. Shukran. Smile. I look down from the window seat at the man packing the luggage bay underneath me. He is speaking loudly in Arabic with two gentlemen who are trying to get him to load boxes of fire extinguishers onto the bus. I try to imagine an explanation for the scene, an exercise in futility. In the end he pushes the cargo into the hold anyway. I wonder how a box of fire extinguishers came to be here in the first place. It passes fleetingly — just another question I will never have an answer to.

The bus growls, grips the scuttling gravel, and pushes out into the desert beyond the final struggling borders of Atbara. There is a video on, but I can’t understand it. My neighbor smiles and hands me some cake. “Shukran,” I reply and submit to the strangerness of my place in this world. My only links to understanding, to existing as more than a ghost made flesh, is my handful of Arabic. Words like “Shukran” and “Abu Hamed.” Simple talismans that help me connect briefly. Be accepted into a hotel, onto a bus. Never into a life, and with very little control.

I’m lost to watching the desert unwind through the darkened glass of the bus, when it crunches to a stop at an army roadblock. The soldier who climbs aboard appears to find me a rather strange sight. Something to be taken to the camouflaged tent pitched in the rock and sand nearby. It looks as if it’s been there for some time. Frayed and dust-marked canvas hanging in the dry heat. Protected by the shade within, a soldier with a slightly neater uniform sits behind a rough-looking steel desk. He seems to agree with my escort that I am unusual. I’m preoccupied wondering how they moved a steel desk hours into the desert.

I show him my passport, trying to be helpful. In reality, I’m using it to defend myself against questions. Shore up my claims to an identity.

None of the soldiers can speak a word of English, but the bus driver has come along to translate. Sort of:

I’m not really sure what he is asking, but try to appear cooperative. It would actually be impossible to ask for clarification, but I feel as if I should appear to be making an effort. So I do.

“Atbara?” I’ve come from there.

“Amreeka?” asks the man in the neater uniform hopefully.

I show him my passport, trying to be helpful. In reality, I’m using it to defend myself against questions. Shore up my claims to an identity. He scrutinises the pages until he finds my Sudanese visa. Satisfied, he plucks a scrappy piece of paper and a sad-looking pen from the steel desk. He records some numbers from my passport and returns the paper scrap and scrappy pen to the steel desk. He smiles and nods his thanks for our administrative dance. I return the smile. Shukran.

I can’t comprehend what manner of system this paper, pencil, and steel desk forms a part of. But I don’t ask any questions. I can’t. All I can do is Shukran. And pity the soul that receives thousands of paper scraps for filing in Khartoum.

When I finally make Abu Hamed, there are no buses at the station. No connections onward to Wadi Halfa. A man who was on my bus takes charge of me. I know this because he points at me a good deal and gestures for me to follow him as he asks questions in the market. Something about Wadi Halfa. I try to keep smiling and tag along dependently. I’m glad of the help. Shukran. Shukran. Shukran.

As luck would have it there are no vehicles departing for Wadi Halfa this evening. But there is a man who speaks some English at the Atbara Hotel, a mud-brick construction lying lazily on the edge of the town. He explains in halting English that there will be a truck to Wadi Halfa later. “Seven or eight,” he says. “Then we drive in the night.” Shukran.

An afternoon spent drinking tea in small, hot, handle-less glasses that should be impossible to pick up, but aren’t. Eating tiny yellow and black bananas and listening to the men assembled in the shade. They are discussing something animatedly, and handing around a pamphlet in Arabic that someone has brought along. A few yards behind the circulating pamphlet, a donkey is rolling in the dust with what I read as something approaching a look of donkey-glee on its face.

I chuckle at it, and a man in the talking circle laughs at me laughing at the donkey. I laugh at the absurdity of being laughed at, laughing at a donkey in Abu Hamed. If you had told me I’d one day find myself here, I’d have thought you ten shades of mad. Between donkey, pamphlet, and the slowly encroaching evening, a stranger, more disconnected experience would be difficult to imagine. My strangerness is unavoidable in Sudan, where little more than my passport and a few words of Arabic can speak for me. Beyond that, I am inescapably whatever people I encounter decide I am.

With the onset of night, passing traffic at the hotel begins to resemble the dusty equivalent of a Fawlty Towers episode. Two men tug a carpet in opposite directions as the muezzin wails. It seems they are arguing about the direction of Mecca to what appears to be a few degrees of precision. A wild-eyed man in an unusually dirty gown approaches me and declares something loudly in Arabic. He is proselytizing or begging, I think, but I can’t tell which. Neither my passport, nor a Shukran you seems useful. I put on my confused face until he leaves. 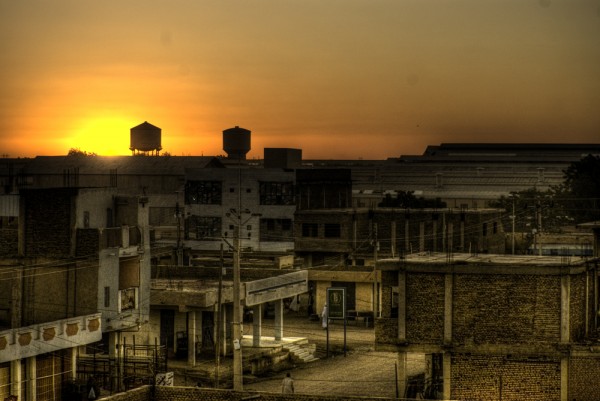 Night falls and the hotel guests mingle with an assortment of just-arrived gentlemen, pulling up plastic chairs to form a semicircle in the dirt outside. The immaculately white-gowned audience waits as an enthusiastic teenager carries a tiny television out into the dust. He paces to and fro with the aerial as the signal shifts, leaving it tenuously hanging from the ceiling — the spot the audience likes best. We spend an hour watching a soap opera in Arabic. At least I think it’s a soap opera. I’m projecting cultural shadows of shows I know onto something that looks like it fits. I don’t really understand. I can’t without language. Without some more definite cues.

Someone eventually changes the channel to Al Jazeera. The news lights up the watching faces and conversation becomes muted. There appears to have been another bombing in Baghdad. Then there is a story about Iraq more generally. Pictures of troops from Amreeka.

I begin to feel a little uncomfortable. My strangerness stirs. I recall the youth behind the desk this morning. He thought I was from Amreeka. As did the man in the neater uniform, behind his steel desk in the desert. I feel judged as the news continues in the language I cannot speak. It pours uninterrupted onto the sand outside the hotel, the faces watching.

My passport is silent in my backpack. Shukran will not help. It’s insufficient. I have too few words to explain that I am not from Amreeka. I am from Janoob Afreekya. I’m South African. My strangerness has become tangled in the moment, and I have no way of drawing it back.