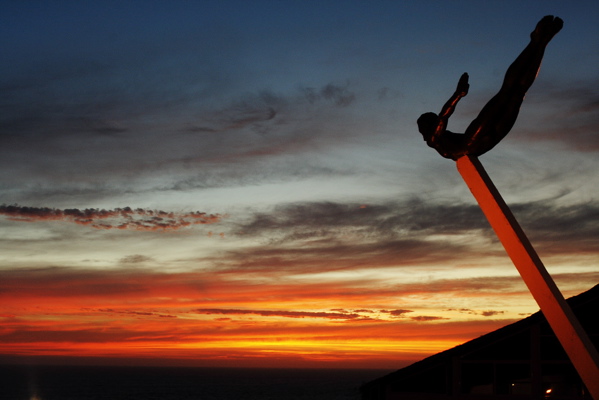 Is there one? Decidedly yes. But it may not be all summer breezes, free wine and chocolate-covered strawberries. In the face of proliferating distractions, our man begins to glean that if the goal is to write more than 140 characters at a sitting, and also keep the kids in breakfast cereal, serious focus — and a good deal of risk — may be the only sure way forward.

**Disclosure: In the researching of this post, the author, as best he can remember, received approximately the following material compensation from sources other than his publisher: one chicken salad sandwich, two chocolate chip cookies, two cups coffee, assorted cut fruit and chocolate, several glasses white wine, one sip champagne, one glass fresh-squeezed orange juice, free parking, sunshine, and wireless internet.*(see comments below for clarification)

I PARK IN FRONT OF A CLASSIC STUCCO MOTEL handsomely done-over in Euro boutique style (where I will pay the standard, slightly-discounted group rate of $155 for a room overlooking the ice machine, plus $3 for toothpaste and $4 for shaving cream). I’ve beaten the googlemaps estimate from SF by 14 minutes. I’m dosed up on NPR and coffee, and cheered by the dissolution of the fog.

There’s a waffle bar in the lobby. Guests are gathered around it like a hearth. At reception, two young girls who might be 12 or 14 or 18 (I find I can’t tell anymore) are on their respective smart devices, texting friends in distant lands while Mom works to secure a roll-away. I can’t help but read the latest missive:

top college in US and only 72 degrees!

If I had an iPhone, I might look up who coined the phrase “The future is now.”

I procure a hard-copy map of the campus and gain permission to ditch the car in the underground lot. Remarkably, despite Griffin Dunne talking to me on the radio about his father crashing the funerals of murder victims, I remember to remove the bike from the roof rack BEFORE entering the garage.

9:55 AM, Clubhouse Ballroom. Freeing Your Inner Entrepreneur: Reinventing Yourself for the Changing Media World 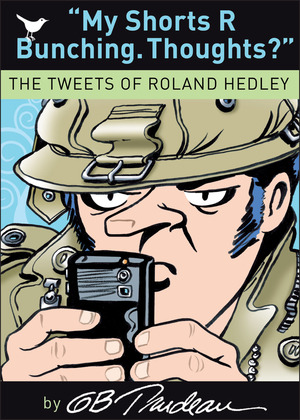 The discussion is well underway by the time I get my nametag and slink over to an open window along the edge of the room. The place is packed. The mood is casual and upbeat, resolutely forward-looking. A fresh breeze blows in from the Pacific. I strain to hear the panelists over the clacking of laptop keyboards and the pleasant swashing of the fountain in the courtyard.

“Err on the side of disclosure…” is about where I catch the train.

From this vantage I can see no one else working with pen and paper. Beside me stands the mastermind behind the whole event, pert, blade-sharp, quietly organizing the world from the dashboard of her red-leather iPad.

Into my current ass-molded Moleskine, with a Mexican-made Bic secured second-hand from the Marriot in Irvine, I scribble:

# of trad notebooks: 0 (am I looking backward?)

On stage, full-time freelancer and whale lover Matt Villano moves from the subject of disclosure into the importance of diversification, of expanding one’s repertoire into new subject matter and new media, “like a stock portfolio.” Having just had a kid, he jokes (sort of) of “breaking into the parenting niche.”

There’s some consensus that writing for free is only a good idea — maybe — if you have something specific to sell, rather than just for the abstract promise of “exposure.” The exposure had better be real and worthwhile. “Writing for 10 cents a word, I don’t care who you are,” says Villano, “at some point it’s offensive.”

“Don’t wait for inspiration: You have to go after it with a club.” — Jack London, as poached from Christine Larson

As for Twitter and Facebook and such, baseball and tech writer Dan Fost recommends staying off the stuff. Marci Alboher, journalist/author/speaker, describes social media as the freelancer’s water cooler, which draws a wave of nods from the audience. Villano, pulling from MBA theory, advises spending no more than 10% of your overall budget (read: time) on marketing (read: social networking). He does the math:

Damon Brown, who writes about sex and technology for Playboy, says he uses social media to connect more directly with his audience. Then he adds: “if you cover Amish culture your audience might not be on Twitter.”

@cmonstah: Agreement in the room that Twitter is the great journalistic water cooler.

@JessicaDuLong: Can I just say how excited I am for the upbeat, forward-thinking energy here at #FFRL ? So refreshing. Looking forward to recalibrating.

@thestrippodcast: I love that we’re having a discussion about the panel during the panel.

@kellymcgonigal: I’ve started using a program called rescuetime, and find I spend ~1/2 my time writing. Feared it was less.

Simultaneously, back at the front of the room, Fost suggests that perhaps his most successful strategy as a freelance writer has been to marry a lawyer.

In the courtyard there is fresh-squeezed orange juice and sunshine. I chat with a former staff-writer for Time magazine. After her section was shuttered, her husband got a job in Modesto and they moved to California. She’s now angling for a future wherein Modesto, which may in fact have redeeming qualities, does not figure quite so prominently.

In which David Granger, rockstar Editor-in-Chief of Esquire, makes a strong case for The Magazine — his in particular — as the greatest medium ever invented. And then lays out just how much blood, balls and marrow-sapping dedication will be required to participate.

Our man goes on to sample oak-aged tequila at approx. $6/oz., refrains from joining a poker game in the motel lobby, agrees to pay $3 for a sample-size tube of toothpaste, makes note of a variety of fellowships and alternative funding sources for investigative journalism (links to be provided), learns that his father has sliced off the tip of his right index finger in the drive mechanism of an irrigation pump, and also that bonobos experience self-doubt, and is reminded (once again) precisely how much hard-labor will be required to craft his next successful national magazine pitch.