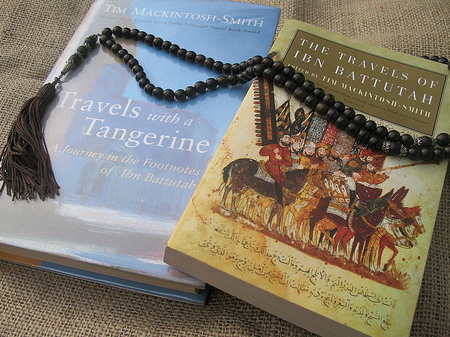 FROM THE BEGINNING, travel writing has been a key shaper of people’s perception of the world beyond their borders and of history itself.

On one level was enterprise. As merchants forged trade routes and returned with goods and reports about fantastic places and culture, this in turn compelled leaders to send more explorers. Classic examples of this include Marco Polo (13th century) as well as the crónicas of friars such as Fray Ramon Pane in the 15th century, then later, William Bartram, and Lewis and Clark.

On another level was religion. Muslim pilgrims making their hajj to Mecca wrote copious descriptions of their journey as did East Asian Buddhists devotees traveling to India to visit holy sites and to study with Buddhist masters.

Compared to our current “small world,” the lands and cultures across oceans and even over the next mountain range must have appeared vast and mysterious to people in previous generations.

But now that the world has been thoroughly google mapped, how does the modern travel writer fit into this tradition? Is ancient travel literature even relevant to study?

T.S. Eliot, in his essay “Tradition and the Individual Talent” asserted that writers must immerse themselves in the whole of the literary tradition. That being conscious of that tradition is key to awareness and appreciation of your own time and place.

In subtle and profound ways we constantly draw resources and inspiration from the literary tradition as a whole. Eliot argued that it is better to be aware of your tradition, to consciously exist within it, than to contribute to it blindly.

This means to better realize our craft we must develop a consciousness of the tradition, from Marco Polo to Pico Iyer.

“…he is not likely to know what it is to be done unless he lives in what is not merely the present, but the present moment of the past, unless he is conscious, not of what is dead, but what is already living.”

Matsuo, Bashō ~ The Narrow Road to the Deep North and Other Travel Sketches

John Steinbeck ~ Travels with Charley: In Search of America

Laurens van der Post ~ The Lost World of the Kalahari

Jan Morris ~ Trieste and the Meaning of Nowhere

Of course this list is by no means comprehensive and by all rights could literally be a mile long. Thousands of travel stories populate our ancient genre, but you gotta start somewhere. Enjoy interacting with the tradition of travel writing and let the words of travelers past permeate your life and writings.

What titles and authors do you feel are still relevant to travel writing?

Sign up for Matador’s new Travel Writing School and connect with a community travel writers that share your passion.