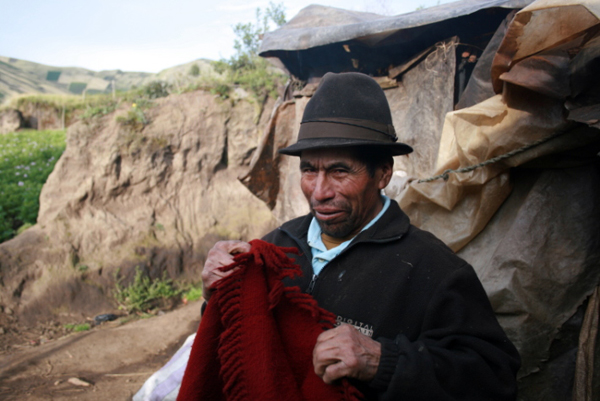 Baltazar Ushca, the hielero of Ecuador’s highest glacier
Travel to the glaciers of Chimborazo with Baltazar Uscha, the last of his people to continue the centuries-old tradition of the hieleros.

We’re heading towards the home of Baltazar Ushca, the last of the icemen of Chimborazo. The mountain is the highest peak in Ecuador at 6,310 meters, about 20,565 feet. Horses had been arranged for my friend and I because the altitude often takes a toll on foreigners, even though we’ve been living at altitude for months.

And Baltazar doesn’t wait around for followers, so once you get left behind you’re on your own. Now it’s near 8 a.m. and we’re way behind schedule, but that’s just something you have to get used to in Ecuador.

The Last Iceman of Chimborazo from Matador Network on Vimeo.

The clear sky that had started the morning is now gone and the low cloud cover blocks out the peak. It seems as though we’re riding straight into the sky.

Here in the páramo, it’s easy to see why Baltazar still loves the tradition. There is no noise, no pollution, and no one else around to bother him. Only the sound of the wind blowing through the short stalks of grass and the grunts of the donkeys.

Occasionally Baltazar will yell what sounds like, “Burro, Carajo!” The temperature drops and the sun gets more powerful, but the tranquility of the land is contagious, and for the next few hours up the trail we can’t help but feel at ease, moving in silence.

Each journey up and down can take 8 hours. Going up with only three donkeys, Baltazar will stop for about an hour to cut up grass which he makes into knots and packaging. This helps to preserve the ice before it goes on to the market every Saturday. Because of this, he only goes up on Thursday and Friday, using the other days of the week to tend to his farm and animals. 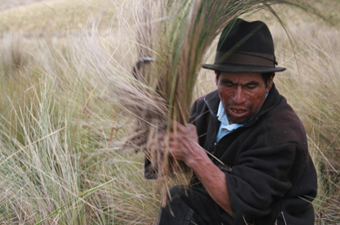 Cutting up grass in preparation for the ascent to the glacier

Cutting up the thick grass and weaving the rope, the short man makes it look so simple that a child could do it, but it’s clearly a precious skill.

Once the grass is prepared, we continue up above the point where anything can grow, and though the trail is steep and slippery, the air cold. We finally arrive at the spot of the hieleros, about 16,000 feet above sea level.

It’s nearly four hours since we left his house, and we can just see the valley over the crest of the boulder strewn earth and below a storm front that is quickly advancing.

For centuries, indigenous men have been climbing up here to chop out ice from the glacier and sell at the market in town. Because of the invention of the refrigerator, however, the need for this pure, Chimborazo ice has dropped off, and now Baltazar is the last man to continue this tradition.

I’d heard about this all from my friends Casey and Lara, who just happened to stumble upon it while on a trip in Ríobamba. The next chance I got I headed to the city, checked in at Hotel Los Shyris, and asked for Joel Quinllin. 10 minutes later we had worked out a deal for the following day, and he headed off to the village where Baltazar lives, Cuatro Esquinas, to set it all up. 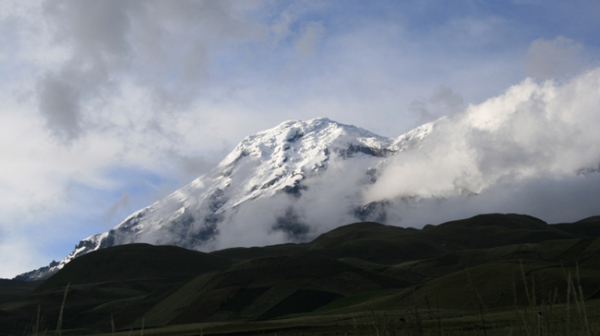 An inactive volcano topped entirely with glaciers, Chimbazo provides water for the region

Baltazar isn’t a tour guide, and he speaks only rudimentary Spanish (his first language is Quechua). That didn’t matter when we met however, as we were greeted with a smile and firm handshake, welcoming us to a day in the life of a hielero.

It’s now officially freezing, but the silent indigenous man has the sleeves of his fleece rolled up and is working hard chopping away at the ice. The glacier, which is covered in dirt and slowly dripping mud, would go unnoticed to someone who wasn’t looking for it, and I realize that I’m standing on a giant glacier just a few feet below the soil.

He’s using a large ice pick to create a giant cube, which then falls down to be chopped in half. Throughout the entire process, he doesn’t say one word. 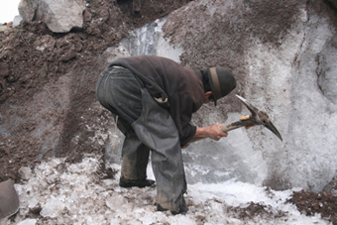 The arduous task of chopping blocks of ice

I offer him some nuts and he gladly takes them, then immediately gets back to work. Once the ice is out of the glacier, the clock is ticking. As we stand there not sure what to do, my feet start to go numb through the two pairs of socks and thin rubber boots.

I’m worrying about frost bite, and suddenly Baltazar takes off his boot to smack his chopping tool and I can see he’s not even wearing socks. His feet are muddy and calloused, but he shows no sign of being cold.

Finally six blocks of ice, roughly 60 pounds each are cut out, and once the dirt around them has been chiseled off, they are prepared one by one in the grass and wrapped up tightly. Each block takes about 10 minutes to wrap and load on the donkeys, so as we sit there being pelted by sleet and freezing, I start losing my patience.

One by one the donkeys are sent packing, and finally he tells us it’s time to go. I want to get back on the horse, but the trail is now too slick and muddy because of the snow, and the horses refuse to move. We must drag the horses down the entire trail, slipping and falling occasionally, aware that the horses are close to sliding right into us.

Baltazar, however, is far ahead of us and doesn’t slow down, as this is normal for him. He must continually run after the donkeys to make sure they don’t get stuck in the muddy trail. Below the clouds again, we can see that it snowed far down the mountain.

The sun comes back out and we can see over the entire valley, the nearby towns, and the two other volcanoes in the distance surrounding Ríobamba. By the time we get back to the flat trails it’s near 5 p.m. and Joel is waiting to meet us with the president of the village. They’re both beaming and want to know how the day went. 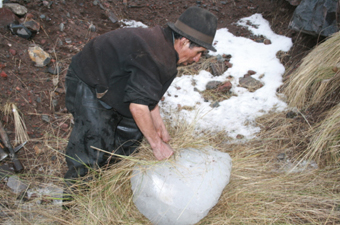 Wrapping the ice for the descent back to town

For all of this work, Baltazar will only make $2 per each block of ice, and of that he has to pay 50 cents per block to transport it in a bus or truck to the market. That means for a gain of $12, he has to pay $3 in taxes, or 25% of his haul that day.

Living in extreme poverty on a farm with his entire family, this 64 year old man continues on a tradition which long ago stopped being profitable. Yet he does so without complaint.

A few years ago some tour companies tried to profit off of this, and would charge tourists close to $200 to go on the hike with Baltazar. Only making about $5 per trip, Baltazar decided he didn’t want to take tourists up anymore, and as a result, not many people are aware of this part of the culture.

And it wouldn’t be right for the trail to be packed with tourists either. Just two people up there could be enough to get in his way, and it would be wrong to make the whole process seem like a Disney Land attraction.

But once Baltazar dies, the tradition will go with him. He is the last hielero, and though it is clearly an impractical way to get ice, it is a part of a culture which has been around since the Spanish arrived centuries ago. His children and grandchildren have no interest in continuing the tradition, and though the town of Cuatro Esquinas wants to somehow continue it, no one has stepped up as an apprentice yet. 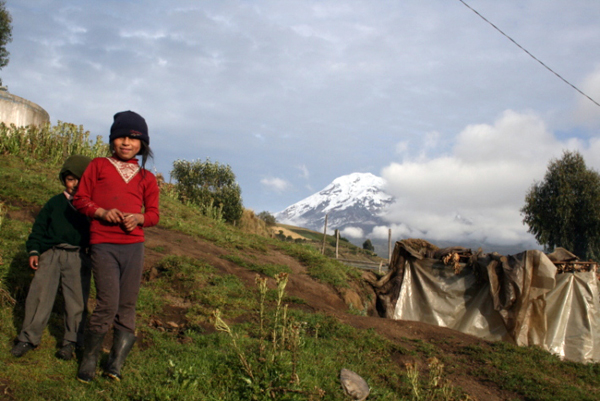 Balthazar’s grandchildren on the farm with Chimbazo peering over

As often happens, the hardest working people are the poorest and most downtrodden. On the outskirts of the city, at the foot of the mountain, they live in a poor village with dirt roads and more animals than people. Life is different here, and the older customs continue strong and proud.

But in a world where uncertainty is the safe bet, how long will it be before those other customs too go the way of the dodo? But here, for Baltazar, it’s not enough to take him away from his mountain. And like every other Thursday and Friday since he was 15, he will go up the mountain again, alone, and live his life as he sees fit.

For more information on Baltazar Ushca, contact Joel Quinllin at:

Tagged
Narrative Ecuador
What did you think of this story?
Meh
Good
Awesome