YOU’VE PROBABLY SEEN the famous black and white Depression-era photo where construction workers sit on the ledge of a crane with New York City beneath their feet as they eat lunch. Influenced by the idea of capturing the world from as high as “Lunch atop a Skyscraper” did, young photographers have been scaling rooftops to take photos just as memorable.

Vadim Makharov, a young Russian photographer who helped advance this new trend, sees “roofing” or “skywalking” as a way to make people see how big the world really is in an age where technology and communication have made it so conveniently small. He works with fellow photographer and friend Vitaliy Raskalov, walking on ledges and wandering the underground to give people a view of the world they may never have seen before. Together, they’ve gained the media’s attention, in particular for their climb to the top of the Great Pyramid of Giza in March of 2013. 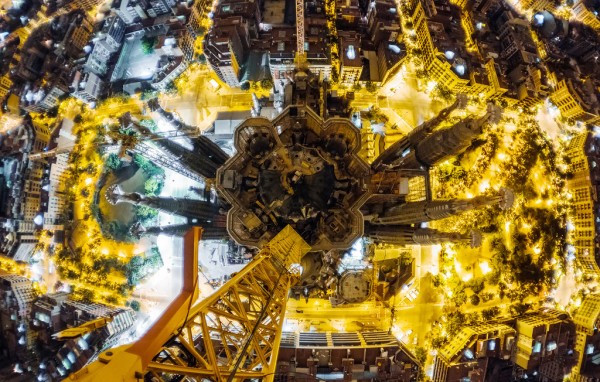 Some criticized them for “disrespecting” the site and efforts to preserve it, while others praised the art that resulted from the climb. Despite the positive attention, Vadim and Vitaliy still apologized in an interview with CNN, saying “we didn’t want to insult anyone. We were just following [our] dream.”

As I discovered over the course of this conversation, Vadim will continue to live his dream, traveling and revealing secret places and unique perspectives of the world’s iconic sites.

BHE: You recently visited European countries like Sweden, Spain, Germany, and France. What inspired your recent trip throughout Europe?

VM: It was not our first visit to Europe, but [Vitaliy and I] haven’t done such a long-scale trip through Europe before. Our goal was to visit the most famous places in Europe and to climb them — and we’ve done it.

You collaborate with Vitaliy on a lot of these projects, from Egypt to your recent trip to Europe. What’s it like to work with him?

He’s my very good friend. I’ve traveled with him all throughout Russia and then we started exploring other parts of the world. We achieve better results when we do photos together than alone.

Do you have a favorite or memorable image you captured from your trip?

Most of all, I remember Cologne Cathedral and the way we climbed it. We didn’t like the city very much, but the Cathedral was fantastic! I liked the size and the architecture. We liked climbing the flagpole [as well], which was a little more than 150 metres. Another memorable climb was the Sagrada Familia and also Notre Dame. All together, these three cathedrals made our trip really stand out. 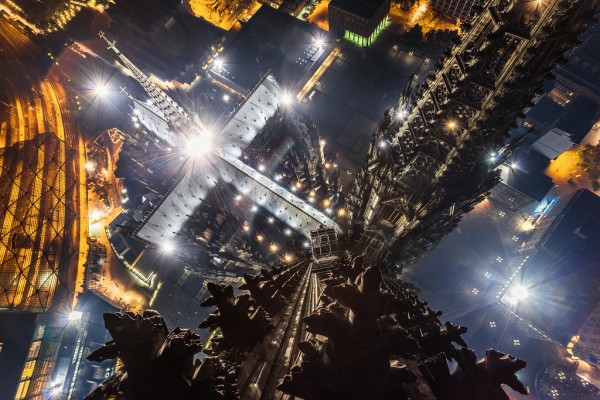 Many of your photos are “daredevil” shots – pictures taken on the edges of buildings and iconic landmarks, or even behind subways leaving underground stations. Why do you take images from this view?

These are the places where people usually don’t go, so I have a chance to make unique pictures. I have a possibility to show people the city from different points of view, and underground it’s a completely different story. Usually it’s hard to get there, but unlike rooftops, which you can see from the ground, being underground is about what you cannot see — not many people are aware of these places. In order to get there, you have to work hard and this is appealing [to me].

Since your photos show perspectives of the world we don’t see too often, do you think they’re historical records for the future, to remember the world as it once was?

Perhaps one day, they’ll have some historical significance. But I don’t think about it now in this way. In my photos — it’s my art. They’re not related in any way to my points of view on social issues. I just want to show the way that I visually see the world. 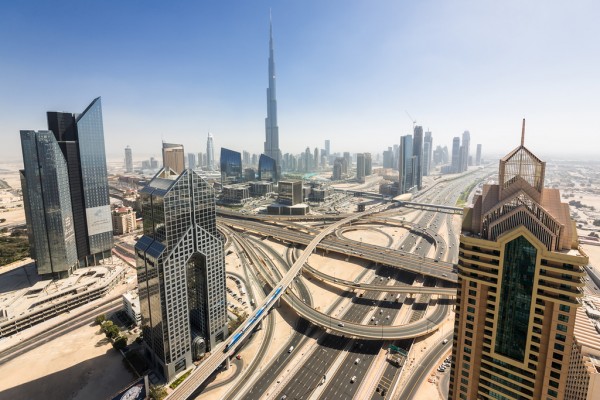 Egypt is one of the places I have always dreamed of visiting. You’ve had the chance to visit in March of this year, and I think it’s fair to say that your trip was more memorable than most people who have traveled to Egypt, because you climbed the Great Pyramid in Giza. What did it feel like to reach the top?

I dreamed for a long time to be in Giza and to see the pyramids close up. Then, when I started climbing roofs [of other buildings], I realized I could climb the pyramids. Why not? When I reached the top, I had a feeling similar to what a mountain climber must feel, like a conqueror, reaching the top of the mountain.

Did you find anything interesting at the top?

At the top there were words scratched in the stones in many different languages. It means others have climbed the pyramids in the past. We are not the first and won’t be the last. Another interesting thing we found was a book by Moses Gates — he does a lot of traveling and climbs roofs and goes underground. 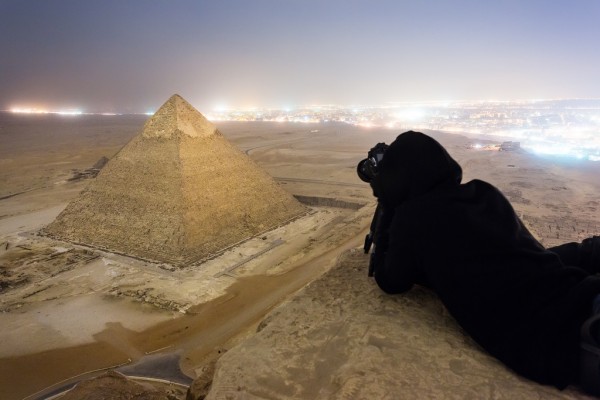 There have been a lot of opinions about your climb [of the Great Pyramid] — some people admire what you did and the photos you took, while others criticize you for illegally climbing it. Why did you do it?

First, we did it for us. That’s why we don’t care about the critics. Second, we do it for the people. We make beautiful shots that are delivered and given to the world. I don’t think we do anything that can truly be called bad. What we’re doing [with our photography] is beneficial work.

Have you ever run into trouble trespassing in areas to take your photos before?

Oh yes, we’ve had some problems with the police. In Russia, we know the process: Once you trespass on secured property, if [the] police catch you, you pay a fine of 500 rubles [about 12 euros or 16 US dollars]. But these cases are rare and usually nobody catches us.

Has this or any negative criticism from the media ever made you think about stopping or changing the style of pictures you take?

I rarely encounter my work with negative criticism…I take shots from heights because I like it. But someday in the future I’ll be tired with it. Even now, I don’t do all my shots from the roof. My second favourite POV is commercial or industrial plants. I like taking shots of plants, electric stations, and different manufacturing facilities.

Where would you like to travel to next to take pictures?

Our next trip planned is Tajikistan, Uzbekistan, and possibly Afghanistan.

Americans, voting abroad is easier than you think
This small and remote Scottish island is looking for new residents
The most beautiful and emptiest state parks in New England
Italy is reviving a Black Death tradition by reopening ‘wine windows’
‘Accidentally Wes Anderson, The Book’ is a nostalgic mix of colors and symmetry