14:06 Apr 22, 2020
View all travel news
Top Regions
Top CitiesView All Destinations
Trending Regions
Trending Cities
Load More
There had been a distinct increase in the occurrence of random ululating in my Istanbul neigbourhood earlier that week.

My flatmate and I had written this off as seasonal declarations of random excitement, or perhaps a sudden arranged marriage or engagement. The women’s voices below rose and fell, their tongues creating a long, trilling, high-pitched sound like the howl of a wolf. 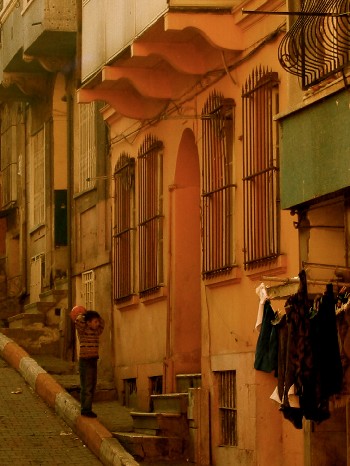 The neighborhood. Photos by the author.

I would lie in my windowbox bed at night and listen as it trilled off into a horsey whinney, somewhere in a neighbouring flat.

However, one night we discovered that the ululating actually had a reason: one of the local boys was being shipped off for his compulsory military service and the whole neighbourhood was getting quite giddy and garroulous about it.

Boys of all sizes started milling in the streetlamp light at the crosshills in front of our flat around midnight, lighting flares and firing capguns into the sky like a Black Sea wedding gone Kurdish.

Slowly the number of milling boys swelled to include bearded and capped old men, covered and uncovered women in raincoats and black cloaks, galloping children, terrified cats, and one decidedly nunlike grandmother draped in black with white lace pulled up around her jawline, wimple-like.

The boys on the hill spent a few hours just running around randomly and jumping over ledges and shouting, until two cars, decidedly 80s model Sahin sedans, drew up below our flat, draped in the Turkish flag, and the crowd swelled immediately. A mighty roar erupted from the mass, and a hundred men and boys linked arms and shouted and roared and bounced up and down, forming a snaking circle around the quiet, lightly bearded soldier boy. 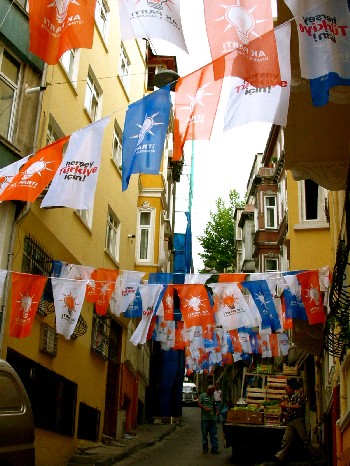 Boasting and praising bellowed chants ensued, with the hordes raising fists to the air and declaring him to be the greatest soldier ever, the protector of Tophane (our neighbourhood), the hero (so brave!). More gunshots, firecrackers and horsey ululations, and a unified fierce stomping mass, up and down, up and down.

The mass broke into two parts, very West Side Story like, with the Jets backed up against the Christchurch Cathedral and the Sharks crouching down in front of the crappy mean corner shop (who overcharged us regularly on milk and bread).

The Jets shouted something in unison, with arms flying over their heads to point accusingly at the Sharks, and the Sharks retaliated, call and response. For half an hour. Shout and point. Point and shout. Roar roar roar. Then they joined together again, shouted some morale building soldier songs, jumped up and down repeatedly, did a little dance, made a little love, got down, and so on.

The Jets did a few rounds of Allahu Akbar from the edge of the church wall, and the Sharks replied with something in Kurdish: both interesting omens for the boy’s entry into the fiercely secular and nationalist Turkish military.

They picked him up and tossed him around a few times over their heads for good measure. I could see his horizontal form flying up toward our windowsill then disappearing down from sight. Then the digital cameras sprang out and flashes filled the lamplight as soldier posed, with weeping little brothers and apple-faced placid grandma and dozens of random neighbour boys and siblings and cousins.

More jumping and shouting, with a juxtapositional Besiktas-football-team chant thrown in when they ran out of soldier chants. Things only dispersed when the boy very sudenly got stuffed into into one of the flag draped cars at 2 am and freed up the 3- hour traffic jam on our very narrow lane.

Take a spine-tingling trip around Stephen King’s Maine
Canada’s Red Mountain is crowd-funded, quirky, and really, really big
These are the prettiest public toilets in the world
Inside Japan’s freaky themed bath houses and bars (NSFW)
30 awesome Japanese idioms we should start using in English

This Istanbul hotel has the world’s first baklava butler

What NOT to do in Istanbul

Pondering “God” in the Muslim for a Month program

Attempts to get a Russian business visa in Turkey

A day in the life of an expat in Istanbul, Turkey

6 under-the-radar destinations in the Middle East

May 11, 2021 Clay Abney
✖
travelstoke
Download the mobile app
stoked by