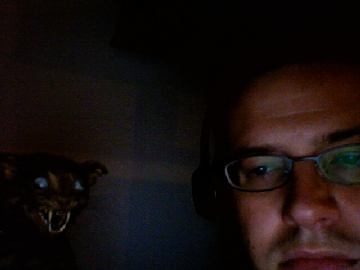 Tom, hanging with ‘the creature’.

Here’s what happened when Matador Editors Tom Gates and Tim Patterson met up for a few days in Laos.

3 days ago I projectile vomited from an auto rickshaw in Varanasi, India, on the way to the train station. This was after a week of flights from Vermont to Chicago to Colorado to New York to Brussels to New Delhi to Kathmandu.

The night train from Varanasi to Calcutta was only mildly miserable, and I found a cheap room off Sudder Street with peeling yellow wallpaper.

The next morning I flew to Bangkok, landed mid-afternoon, took a cab to the massive computer center in Panthip, bought a replacement AC adaptor for my laptop, caught another cab to the bus station, bought a ticket to the Laos border and waited for the night-bus with my head in my hands, feeling the fever come on. 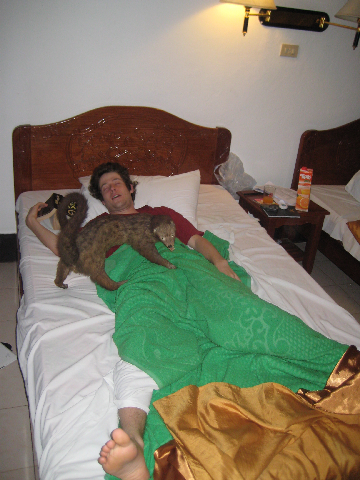 Tim, ‘recovering’ with ‘the creature’.

All night, I alternated between curling against the bus window and lurching down the aisle to spray liquid yellow shit into the can.

Crossing into Laos, I got caught in a rainstorm. I sheltered in a café, asked to use the bathroom, then promptly shit my pants. Disposing of my boxers in the bathroom garbage can, I free-balled through the rain to the guesthouse Tom had chosen, Lani Guesthouse, a lovely inn tucked down a back-lane next to a quiet temple.

I knocked on the door. Tom was at the desk, typing. He jumped up and gave me a big hug, then instantly recoiled. “You’re soaking wet,” he said. “You don’t even know the half of it,” I replied.

That night I slept for a solid 12 hours. At some point Tom took the photo of the creature on me. Now, thanks to antibiotics, I’m back on my feet, and this little adventure can properly begin.

Patterson and I immediately set up a domestic partnership. It was simple. First he needed confirmation that his hair had gone Play-Doh Barbershop out of control. 5’9” whiteboys from Vermont don’t need fro’s – no hesitation in telling him yes to that.

Second, he needed a Manny, on account of his shitting sickness. I did my best, hunting around town for foods that bind. Third, he needed somebody who would sit silently near him, completely ignoring his presence and typing on this laptop. This was gonna be perfect.

We did the sunset on the Mekong thing again, which is always pretty amazing. We sat at tables at the end of river bend, watching kids play soccer and eating cashews that had been fried up in oil, then coated with salt (I had to ask that they be placed on the other side of the table, lest I would eat them all in two handfuls). 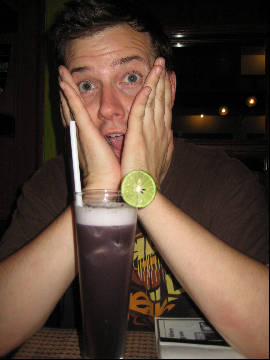 We gave another bar a shot but it pretty much sucked. I ordered a Full Moon Rising cocktail, which looked exactly like water that’s had different color paintbrushes dipped in it.

For dinner, I made us go to a place called Sticky Fingers and I ordered nachos and yes, I’m That Guy.

But. Full redemption. I stumbled upon the best cocktail I’ve ever had, called Tom Yum Martini. It’s vodka that has been soaked in chili, added to fruit juice that’s been mulled in lemongrass and ginger, added to sugar water. Fuck me with a chainsaw, that was good. I had two.

My lips were fiery and had a freshly colagen’d look to them but heavens to Betsy, was I happy. We had a bizarre dinner with two interesting dudes, both 19 year+ expats in Laos. We listened as they debated the issues of the day with gusto and an American accent that I missed. “Oh, that fucking place…” “What a pile of horse shit that was..”.

The other side of these guys was all heart – each of them have been doing things for this country that could only help it, for no other reason than to just do it. They were equal parts Clint Eastwood and Jimmy Buffett. Then Tim bailed, probably to drop his innards into our toilet again.

I hung back and talked to a 24 year old from Washington. He grew up on a weed farm. I came home to a room that smelled like farts. Well not exactly like farts. More like cashews. 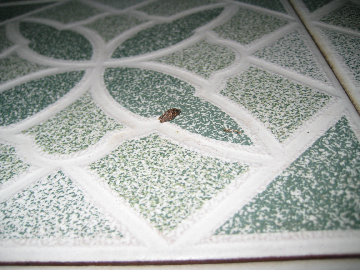 Note to Tom: was this the rat shit?

The other day Tom got his ass stuck on the toilet. We had moved from lovely Lani Guesthouse to a cheaper backpacker joint by the river and, while this new room is perfectly serviceable, according to Tom there’s rat shit in the bathroom and the toilet seat is cracked.

This crack is what pinched Tom’s butt-cheek. “I thought something had reached up and grabbed me,” he said.

For those who are concerned about my wellbeing, thanks. I’m on Azythro and although I haven’t enjoyed a solid yet, I can now fart without worrying about the dreaded accidental shart.

I admit the room smelled like farts when Tom got home last night, but I deny bailing from Sticky Fingers. We were both on our way out the door when Tom spotted a hot guy alone at the bar and got the same look on his face that he gets when he’s about to order a Beer Lao.

I wasn’t about to stick around.

First: Mouse shit. There’s mouse shit on the bathroom floor. Second, I’m so excited that Tim is coming along so quickly, able to spot hot guys with ease. I’d suggest that he liked dudes if he didn’t stop hitting on Japanese girls.

I had to admit, that’s a cool move. To be a granola-looking Vermont kid, to walk up to a Japanese chick and start talking in their language. Rapidly. Then be able to drop “Oh I lived there for a couple of years.”

[Editor’s note: where are those pictures?]

They melt every time, no matter how obvious a come-on it is. Patterson’s got a passion for these girls that rivals Rivers Cuomo. These Japanese girls do it to him every time.

We’ve taken to holing up in Joma Café, which has Wifi, aircon and incredible home-made soup. We sit there like an elderly couple, locking up tables for hours on one order of lemon shakes. I’ve been downloading Battlestar Galactica episodes, which is surely why everyone in the place wonders why the Wifi is So Damned Slow Here.

Vientiane is coming up faster than I thought it was. I was here just one year ago and found it to be somewhat sleepy. It’s now growing at a positively Vietnamese pace, with guesthouses going up on every corner. One afternoon I watched an entire storefront went up on a 7-Eleven knockoff, then went inside and bought a bottle of water that was priced 10 cents more than the other, non-flashy 7-11 knockoff next door.

They’re getting it – increase the price if it’s perty-er. We’ll go to the perty-er one, no question. 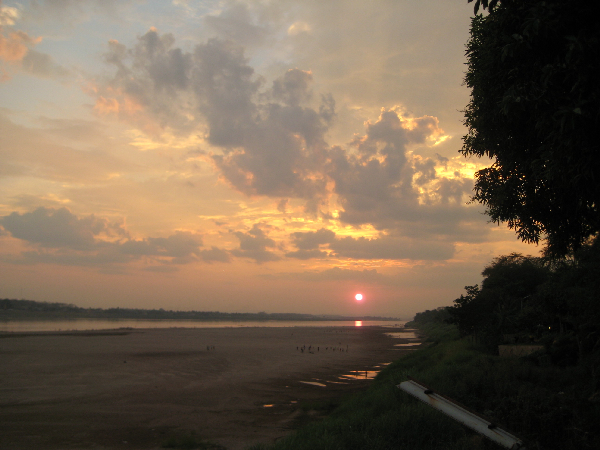 Yeah, Vientiane is a heck of a lot fancier than I expected. It’s not a tourist boutique like parts of Luang Prabang, but there are plenty of foreigners here, some shops selling golf clubs and a handful of upscale cafes that cater to WiFi addicts from Connecticut. (Both Tom and I are actually from Connecticut. In fact, our fathers are from the same town, Durham).

But yeah – people are doing a brisk business in the capital of Laos these days. When I arrived a new ATM was going in on the corner by our guesthouse and yesterday two Swedish girls were already withdrawing kip.

I love the riverfront – ramshackle restaurants and beer gardens with fresh chicken and beef, live shrimp and fish and glum frogs all displayed out front.

The sunsets here make me want to paint watercolors, something I haven’t done in years. Around 7 pm the river is painted pink with a blood-orange streak where the sun is falling and kids are running around on the sandbar, playing soccer or going for a swim.

We found a great little bar for the sunset yesterday, pretty much the very last one if you walk west along the river out of town. There were just a few tables and not much on the menu besides warm cashew nuts and Beer Lao. An adorable puppy was playing under our table. I tried to be its friend but it didn’t like cashews.

Tagged
Narrative Laos
What did you think of this story?
Meh
Good
Awesome