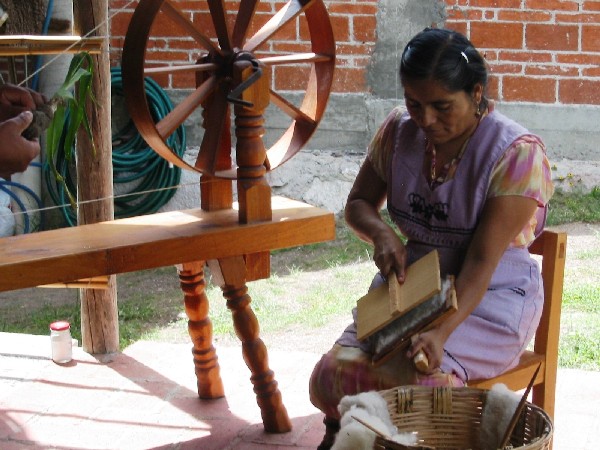 His grandfather loaded the rugs onto his burro and sold them in the coldest parts of the mountains, where they kept floors warm. Today, Faustino and his wife, Ludivina, sell their rugs to tourists, who hang them on walls.

But it’s been one thing after another for anyone involved in the tourist trade in Oaxaca in the last few years. Don Faustino counts on his fingers: the teachers’ strikes in Oaxaca in 2006 and 2008, the economic downturn in the U.S., the recent overblown media coverage of border drug violence that’s scared tourists away from all of Mexico, and now, swine flu panic.

Teotitlan del Valle is never a wildly busy place, but this week it’s been utterly silent. 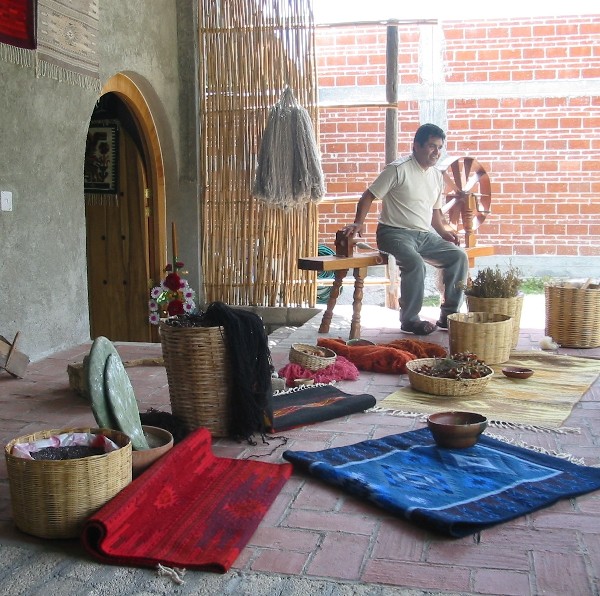 The baskets of marigolds, indigo, moss, pomegranates, and cochineal that Don Faustino and Doña Ludi use for their natural dye demonstrations are shoved haphazardly under the spinning wheel, instead of artistically arrayed in front of it in anticipation of visitors.

The wooden table where smaller rugs are normally displayed has been sitting naked in the middle of the display room all week. We cleared it off for our first English class on Monday, and it hasn’t been needed for its usual duties since then.

Doña Ludi takes a slightly different view of the waning supply of customers than her husband. She tells me that people simply don’t buy things for beauty anymore, and if they need something to keep the floor warm, they buy a cheap, mass-produced rug at Sam’s Club or Home Depot.

Her sons, at 13 and 17, know how shear the sheep and dye the wool and weave the rugs, but she suspects they’ll have to find a different way to make a living once they finish school.

Don Faustino and Doña Ludi have managed for years to make a living, carry on a generations-old family tradition, create from scratch something beautiful and—at least potentially—useful, and not hurt anyone or anything in the process.

Is that becoming an impossible combination to hope for? 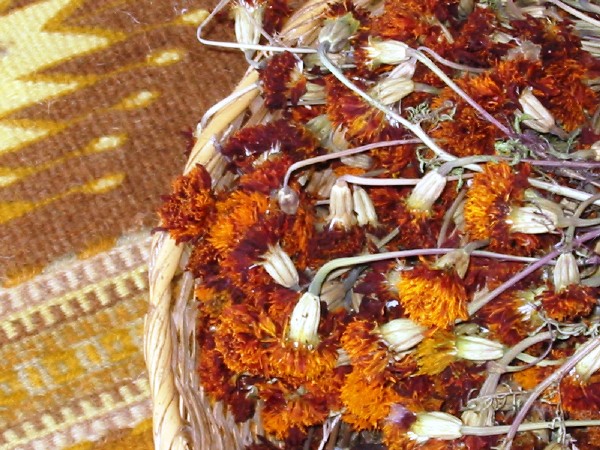 Doña Ludi tells me that she and her husband will probably never go to the U.S., though some of their relatives have. “I think we’d get lost there,” she says—not self-deprecatingly, but matter-of-factly. But she’s not sure how they’ll manage to go on like this, weaving beautiful rugs that no one buys.

I planned our English classes around their work—they’ve learned to say “sheep,” “rug,” “marigold,” all the relevant vocabulary. Already they’re giving me little tours in English: “This is a sheep!” they tell me, after we hike up the back hill to the pen. “These are bugs!” while holding up the basket of cochineal.

After class, I wave from the dusty edge of the quiet road and hope they’ll be able to use their brand new English with someone other than me before too long. That they’ll find a way to go on.

And anyway, I tell myself, at least we’re having fun—and that should do us all good, in these days when it’s too easy to be sad about all that’s being lost.

What other traditions are in danger of being lost the world over? What can we do about it? Share your observations and ideas in the comments below.