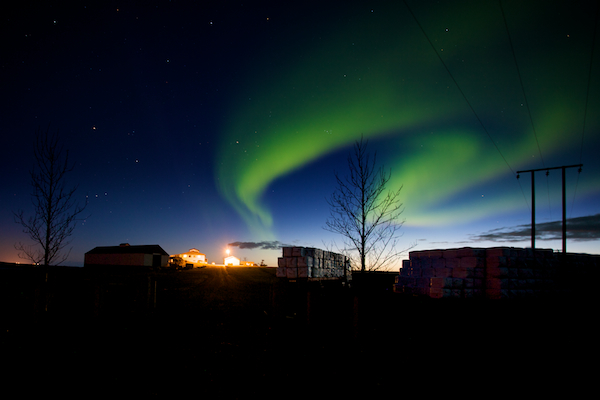 We recently posed a question on our Facebook Fan Page: What’s the one skill every travel photographer needs to develop?

IT’S A DECEPTIVELY difficult question, since so many skills can be applied to so many situations. For example, the opportunity to take the image above, snapped during a recent trip to Iceland, came up very suddenly. I was driving with friends from the Westfjords region back to Reykjavik when the aurora borealis appeared in the sky – boom!

We were driving on a highway and had to find a place to pull over. At first I didn’t think I would be able to get a good shot since the lights were shimmering away beautifully on the other side of the road – the foreground would have been lots of nasty highway.

Then they began to appear above the farmhouse in front of us. I also thought this wasn’t such a great angle either, especially with the trucks and telegraph wires seemingly in the way. It was freezing cold outside (as it normally is when the lights appear) and I was tired after driving for several hours. We had also nearly crashed earlier on the drive after hitting some ice on the road, and a big part of me wanted to stay warm in the car and watch through the window!

But I dragged my camera and tripod out of the car and began sizing up the scene. As I did so, the lights formed a kind of halo around the truck, which suddenly seemed to create a quite nice thematic counterpoint – heavy and industrial compared to the celestial majesty of the lights – and the naked trees and farmhouse all looked suddenly quite interesting.

The main skills required for this particular shot? Overcoming laziness, fatigue or cold when an opportunity arises; making sure you always have the right equipment with you (no tripod would have meant no photo in this case); being patient, i.e. waiting for a better angle to emerge even when you don’t think there is one.

Some of these skills were already mentioned among the interesting array of replies we received on the post. We’ve listed some of our favorites below. Feel free to join in the discussion over at the page, or leave your opinion in the comments section at the bottom of the page.

*JoAnna Haugen: “Creativity and the ability to see things in a way that tell a story in a single moment.”

*Kyle Anderson: “How to capture and convey the emotion of their environment they find themselves traveling within.”

*David Shults: “Open eyes, you just never know what you might spot.”

*Tasha Gurly: “The ability to immerse yourself in whatever you’re doing, wherever you are, without fear.”