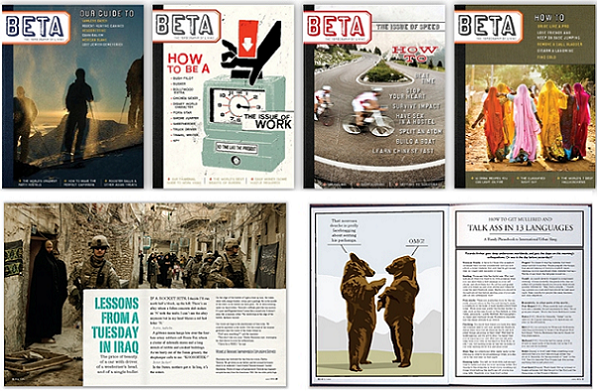 Today Matador officially launches BETA, the essential print mag for those committed to travel as a way of life.

FROM THE EARLIEST days of Matador, my dream has been to see our stories in print, to craft stories worthy of printing. I’ve wanted a magazine. I could almost see it, cover wrinkled, smudged, sitting on top of a mantle in a hospedaje in Buenos Aires, at a kayak shop in Salida, in a friend’s garage. It’s something you’d find not on the internet, but at ground level.

There are other reasons I’ve wanted us to create a print mag (some of which I’ll get into below), but what it really comes down to is this: we’ve never seen a travel magazine as fucking good as we know there could be.

For so many of us, ‘travel’ + ‘writing’ are the two things we love more than anything. But nowhere has there been a magazine wholly invested in us, in our culture. Instead, it seems like the opposite. So much of what passes for travel writing is like an attack on all sides: places reduced to brands and ‘positioned’ in the market. Beaches and sunsets ranked. Cultures and peoples objectified, treated like ego-props or scenery. Experiences packaged like fast food. History and context simplified, buried under cliches and fallacies. Our relationship to earth forgotten, commodified.

Travel writing in its highest form is like a cairn. It’s tangible. It’s formed out of the local landscape. It registers and measures one’s relationship with place. It’s meant to remain for a long time. It can guide you at ground level. And it can guide on other levels too. This is our vision behind our new print magazine, BETA.

Even though I’ve been eager for print all this time (jealously watching progressions at Wend, for example), I’ve believed in Ross Borden’s instincts to build Matador online first, and felt fortunate we’d chosen this trajectory when old-school (read: print) media started getting beat down massively around 2008. 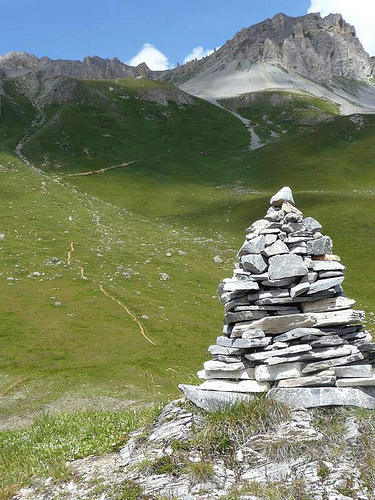 Cairn in the Alps, by marydw1

I wrote some notes about the beatdown last year and realize that launching a print magazine is still ballsy given the prevailing flow of magazines going broke and having to call it.

With all that said though, here is an earnest roundup (which, ironically is exactly the kind of article you WON’T find in BETA) of 8 reasons why we’re stoked to launch a print mag:

1. It’s about sharing, giving away, leaving behind. I remember sitting at a kid’s house in La Ticla as myself and a bro and maybe 5 other Mexican kids took turns getting our heads shaved by the one kid in town who had clippers. While we waited we looked at surf mags people had brought down, and (as per custom) left down there. A few weekends ago I brought along an issue of The Surfer’s Journal for the car ride to a local ski area with my neighbors. Magazines allow you to share culture in a way that molds into the flow of the day. The screen alters that somehow. And it can’t be left behind.

2. Not everyone has access to a computer (and those who do could probably use a break, especially while traveling). Let’s say you’re in Turkmenistan, which Ken Silverstein recently reported (in Harper’s) to have only two internet cafes in the whole country and very poor attendance “perhaps due to the soldiers at the doorways or to the hourly fee, which runs about $10, more than the average Turkmen’s daily income.” What are you going to read? A full issue of BETA will slide easily into your pack, provide hours of rich entertainment, and run you about the same as an hour online in Ashgabat with a soldier looking over your shoulder.

3. Some stories deserve more than being absorbed during ‘screen time.’ I don’t know how many times I’ve read something on screen (say an essay by David Foster Wallace) in between emails, tweets, and other tasks during part of my ass-to-chair time. It usually feels like I’m doing a disservice both to myself and the author, like I’d be contextualizing it, remembering it, feeling it deeper if I had it on a page in my hands instead of just finishing it and clicking on to something else.

4. Magazine Artwork, layout, and design is badass. Or at least it can be. I love the way different magazines have different textures, different paper, different smells. Think of how photos look in a magazine compared to on a screen. In a magazine you can make them huge, borderless, occupying entire pages. You can play with captions, text, illustrations, and the placement of different elements so that a reader’s eye can travel anywhere, across the page for example, and not just down the screen. You can create layouts that lend movement or direction to the way the reader experiences a story. For example, in a recent Surfer’s Journal (TSJ Vol. 19, No. 1), an article called “A Roll of the Dice” used pen and ink illustrations and text from the author’s journal overlaid on the photos. It gave multiple perspectives within the same story, creating this sense that you were with their crew in Indo joking with the boat captain. Webdesign can be ‘clean’ or ‘minimalist’ or ‘grunge’ but it’s still aesthetically limited, not tactile and directional the way a magazine can be.

5. Magazines have a kind of life span, including their own journeys. It’s always felt slightly magical the way books and magazines have seemed to find me while traveling or living abroad. Earlier this year I got an issue of BOMB in the mail down here in Patagonia (thanks again Julie). The fact that it had physically traveled down here, had been packed up in a certain way, had been thumbed through by a friend (and had sticky notes attached) – all of this made the receiving of it take on levels that never could’ve existed in an email with url or attachment. Magazines are like artifacts, becoming a part of one’s library, a presence in one’s house, or at a cafe, hostel, meeting place.

6. Your magazine is not going to die on a 30-hour bus ride down the Ruta 40.I’ve found as a general rule that the more I’m in a place I really want to be, the less chance there’s going to be dependable Wifi, or electricity for that matter. Your magazine doesn’t need wireless networks, batteries, or alternating current. Nor is it going to short circuit as a result of a beverage spill. You can fan yourself with it, swat insects, use it as temporary shade, make annotations, de-seed marijuana. Under certain conditions (probably poor knowledge of terrain and / or lack of dry tinder) you can use it to start a fire. Similarly, desperation may call for the ‘crumple and uncrumple method’ to produce backcountry toilet paper.

7. It feels righteous in these times to provide a decent paying market for writers and photographers. I made $50 for my first printed thousand-word piece. That’s 5 cents a word. We’re offering ten times that–2 US quarters per word for the good stuff. It may not get the collections dude off your back, but it could cover a season pass at A-basin or a surf trip to Baja.

8. Because we think we can pull it off. I find little in media more banal and useless than talking about “the death of print.” There are dozens of magazines (look for article forthcoming next week) sustaining and thriving because they have the vision to reward their readership in a way that no one else can. This same idea has been at the center of Matador from the beginning. It was simple: there was no ‘meeting place’ for our tribe. We needed a community and so we built it together from the ground up. We’ve always used our community’s voices and ideas (and very little money) to develop our vision, rather than impose one from above. Looking downstream, we know there are dozens of potential partners out there who would benefit by being associated with our brand and our million plus visitors a month online. We will only partner with companies whose products and services we use and whose ethics we respect and admire. We don’t have an office or rent due in some midtown NYC office building, but live all over the world, each of us on the team driven and committed to travel as a way of life.

**UPDATE 10/29: BETA now has a twitter handle. For the latest information for potential contributors, please follow us @betamagazine.

What do you think the world’s best travel magazine ought to be?
What sorts of things do you miss or wish you could get that you’re not getting with what’s out there now?