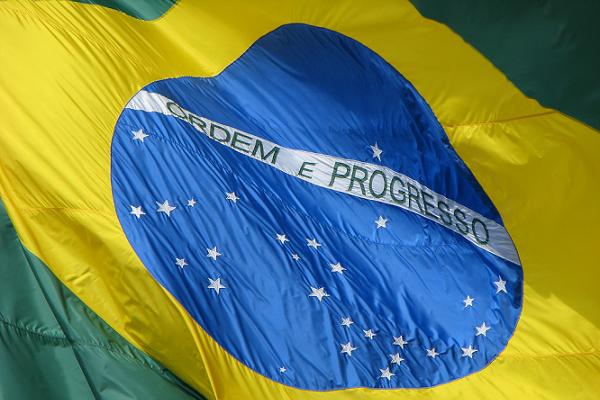 If you thought the U.S. election was interesting, take a look to the south.

A few weeks ago, on a Saturday afternoon, I went to nearby Recife armed with my camera. I wanted to catch a demonstration organized against Senator José Sarney and, perhaps, write about it. I left after a few minutes, taking no pictures and interviewing no one: the protest was small and the impact was null.

I was disappointed then, but the movement has slowly been gaining force, with demonstrations being held every Saturday afternoon in every major Brazilian city. Some Brazilians are speaking of how this grassroots movement resembles the protests that forced the resignation of former President Fernando Collor de Mello in 1992. Sarney has simply refused to resign, and so far his supporters in Brasilia have managed to get all charges against him dismissed.

But in a country plagued with corruption, some wonder why Sarney and not others are dogged by criticism. The answer is simple: Sarney is the current president of the Senate and a former president of Brazil. While he was president he was accused of corruption, and now, as senator, he’s facing a similar charge. He’s practically a sitting duck, ready to be made an example.

There are a lot of protest movements springing up around Brazil (and cyberspace), some serious and some not so serious, but all of them agree about the end result: no more Sarney. The highlight of the not-so-serious ones is the “moustache strike”, which was picked up by The Guardian recently. 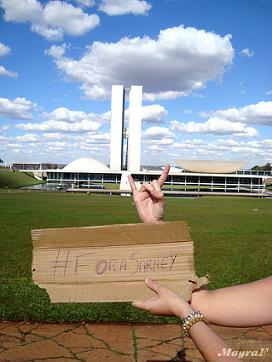 Twitter has been a great source of up-to-date news; simply search for #forasarney. Finally, Orkut (a social network that is more popular than Facebook in Brazil) has seen the birth of a number of communities, the largest one nearing a modest 40,000 members.

Criticism against Sarney and his family has been so strong that it’s ended with censorship. Though it’s (apparently) an isolated incident in Brazil’s recent history, The New York Times wastes no time in drawing comparisons to Venezuela, Nicaragua, and Bolivia.

Will Sarney be removed from office? It looks doubtful. The current president and his coalition have backed Sarney, and the opposition is small and powerless in Brasilia. The question many are asking is whether this crisis will affect the Worker’s Party in the 2010 elections. Under Brazilian law, President Lula cannot be reelected for a third term, so he has named a successor, Dilma Rouseff, the current Secretary of State, as his pick.

Senator Marina Silva, profiled by The New York Times this past Saturday, left President Lula’s Worker’s Party to join Brazil’s Green Party. Silva served as Environment Minister under President Lula from 2003 to 2008, but quit when Lula’s economic ambitions clashed with her environmentalist ideas.

She’s not the first one to abandon ship: Heloisa Helena (who later placed third in the 2006 presidential elections) was kicked out of Lula’s Worker’s Party in 2003 and started the Socialist and Freedom Party.

Shortly after Silva’s defection, rumors started flying about a potential Green Party candidacy for the presidency in 2010 with musician Gilberto Gil as a running mate. Gil is yet another former member of Lula’s cabinet, having been Minister of Culture from 2003 to 2008, but (unlike others) left amicably.

Early polls show Silva far behind other candidates, but she could play spoiler by drawing votes away from the Worker’s Party. Of course, because she is a black woman, the comparisons with Barack Obama have not taken long to arise. The obvious joke is that, while Democrats in the US had to select between an African American and a woman, Brazilians can get both in Silva. 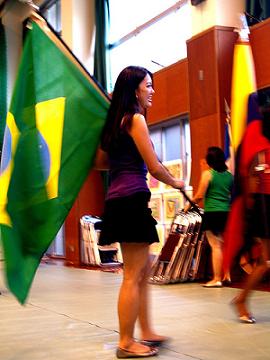 President Lula was at one point seen by many on the left as the one who would change Brazil. He inherited strong economic policies from his predecessor and cemented the might of the Worker’s Party. Lula’s poor upbringing, his lack of education, his time as a metalworker and his socialist ideas kept him as a bridesmaid in the presidential races for over a decade before being elected for consecutive terms. But in the process he created a “coalition” government alongside former enemies, and alienated many who formerly supported him.

He tried to change Brazil, but more noticeable is the fact that the presidency has changed Lula. He is now allied with Sarney and Collor and others who have tainted political records. And many on the left hope Silva or Helena can step in where Lula fell flat, such as environmental issues.

The 2010 presidential elections may come down to these three women: the one who is still by Lula’s side, the one who left voluntarily, and the one who got kicked out.

In typical Brazilian fashion, it will be quite a soap opera.

Planning your own trip to Brazil? Be sure to read Ernesto’s 10 Tips to Improve Any Trip to Brazil.