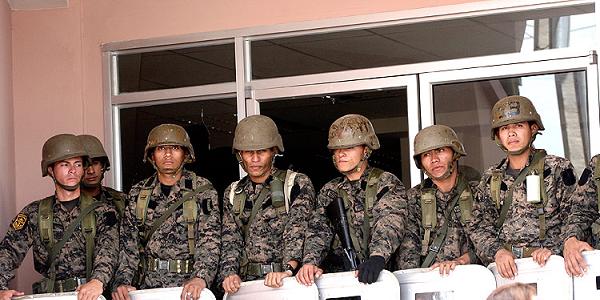 The context for the arrests is the conflict surrounding a national referendum that was to take place Sunday on the presidential term limit. Following the lead of other leftist leaders in Latin America, Zelaya and his supporters sought the referendum in order to extend his administration for another term. The Honduras Supreme Court earlier ruled the referendum was unconstitutional.

One of the coup leaders is allegedly School of the Americas graduate and head of the Joint Chiefs of Staff, Romeo Orlando Vasquez Velasquez, whom Zelaya had dismissed after he refused to cooperate with the national referendum. Zelaya was reportedly arrested in his pajamas and then taken to an airbase outside the capital to be flown to Costa Rica.

While events are unfolding, several heads of state and organizations from around the world have already condemned the coup, calling for a restoration of democracy and the return of President Zelaya. Many Latin American countries–including Brazil, Argentina, Venezuela, Chile, and Ecuador–have issued strongly worded statements.

Ecuador’s foreign ministry said it “will not recognize any government that is not that of President Manuel Zelaya.” Venezuela’s Hugo Chavez has put his military on alert.

Bolivian President Evo Morales has said, “What is currently happening in Honduras is an adventure of a group of the military who have assaulted democracy.”

U.S. Secretary of State Hilary Clinton has also weighed in, condemning the coup:

“The action taken against Honduran President Manuel Zelaya violates the precepts of the Inter-American Democratic Charter and thus should be condemned by all. We call on all parties in Honduras to respect the constitutional order and the rule of law, to reaffirm their democratic vocation and to commit themselves to resolve political disputes peacefully and through dialogue.”

Europe has also been watching closely. The French Foreign Ministry said, “France firmly condemns the coup that has just taken place in Honduras. The arrests and expulsions of diplomatic envoys are a grave breach of the Vienna convention. They are unacceptable.”

Honduras is a member of ALBA, the Bolivarian Alternative for the Americas, which is an alliance of leftist countries in Latin America. The alliance’s mission is to build an economic and social alternative to what member nations see as unfair free-trade agreements dominated by the interests of the United States and multinational corporations.

Zelaya is now in Costa Rica, where he calls for peaceful resistance to the military coup. The government of Costa Rica also calls on the international community to condemn the coup.

To learn about other recent political developments in Latin America, read “El Salvador Leans to the Left.”