WE WERE STOKED to receive over 100 entries that described in detail broken limbs, airport crises, muggings, heart attacks, and near misses. Ten daily winners earned themselves a Gerber Venture Knife and Steady Tool for telling their tale of travel horror. The entries that stuck out presented not only a compelling story of trouble faced head-on, but were told with a sense of transparency, humor, wit, and a healthy dose of grit and gumption.

Our Grand Prize Winner…
…spent a night pushing and repairing a claptrap motorbike across an Indian desert — congratulations to Kirk Wilson, winner of the Gerber Apocalypse Kit. Next time trouble comes looking for Kirk, by golly he’ll be ready.

Below is Kirk’s story and a handful of excerpts and photos from some of our favorite daily winners. Thank you to everyone who took the time to share their travel horror stories with us. We hope your future travels are trouble free!

Upon a visit to Bundi, India in the heart of summer, a trip to a waterfall oasis for a swim seemed to be a relaxing way to spend the day. I’d heard the waterfall was a mere forty kilometers away through the desert, so I bartered for the hire of a local motorbike. Chuffed with myself at the bargain price I had haggled, I rattled down the road grinning from ear to ear.

I should have taken greater note of the duct taped muffler and rusted engine mount.

With the sunshine baking down in excess of 40 degrees Celsius, dust in my face and wind in my hair, I was blissful. Yet, after half an hour the motor simply cut and died, and it wasn’t for lack of fuel. Far from any town, I started walking back in the direction I had come. I found a village in the desert and repairs were made in a dust bowl on the side of the road. All was made good, and I was off again back down the road I had come…or so I thought.

Five minutes later, a flat tire. I walked back to the village for more repairs while 40+ children pressed about me staring. Despite my delays, I finally made it to the waterfall. It was glorious and refreshing and I swam till the light began to fade. Cicadas cranked up their song, and dusk fell over the desert.   Driving back again, without warning, my motorbike chain snapped. Bugger.

I walked onward for an hour to find a village. My bike was once again repaired while I was stared down by 50 villagers in a not quite threatening manner. By this time it was dark — desert dark. Five minutes further up the road, the chain snapped again and shot off into a ditch in the pitch black. With nowhere else to turn and no chain to fix, I started walking through the desert, hoping the scorpions and snakes didn’t mind. I walked and walked, pushing the claptrap bike beside me, hoping I was on the right road. I had walked over four hours before I was rescued by a kindly passerby, using my t-shirt as a tow-rope. We stopped for four shots of whiskey at a seedy hole in the wall on the way home. In celebration of the safe return of the motorbike, I was presented with a cold beer and in kindness, the hire fee was waived for my troubles.

The next morning, five men carrying splintered lengths of wood and rusting steel pipes, with angry toothless faces, approached me, interrupting my breakfast in the shade. I was accused of trying to skip town and refusing to pay for the damage sustained to the bike. I was vulnerable, alone, and in deep shit. I politely explained that the fee had been waived and that the bike was simply old and had its day. Sticks and poles were clenched tighter still and steps were taken toward me, lips pursing grimly. Taking a deep breath, accepting I had little recourse, I simply asked the angry men to join me for chai.

Within moments, poles and bats were lowered and we were all seated together, joking and laughing about my escapades of the day before. Masala chai had saved me. 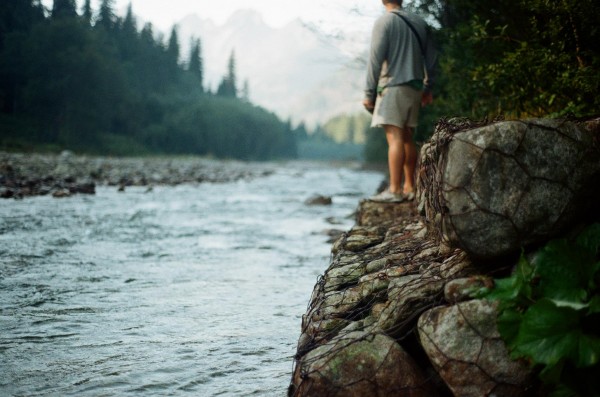 Running from Polish Park rangers in the Zakopane Mountains (refusing to pay entrance fee), and Slovakia is just across the river. – Dylan Hess

…A man had a heart attack on our flight from Los Angeles to Moscow, and I am the most medically qualified person on this plane.

It began with a call for a doctor that I ignored because I am not a doctor. I am, was before I moved, an EMT. It wasn’t until I saw the familiar scene of a man on oxygen lying on the ground that I hesitantly approached. A relieved group of flight attendants and two ambiguously qualified Russian women eagerly accepted my help. Alan, a middle-aged man traveling alone, had suddenly gotten very pale, sweaty, and short of breath. After assessing him, it was clear that he was having a serious heart attack.  Overwhelmed but well practiced in appearing in control, I took charge. Thankfully, Alan had aspirin in his carry-on. If given early enough, aspirin is a lifesaver so I popped the top and shoved pills in his mouth…

…  We did not speak a single word to one another as we walked back to the truck stop, where he demanded to speak to a manager. The manager, named Maria, was maybe 19 years old and completely horrified as my friend graphically explained that her tamales made him defecate in his only pair of pants on the side of the highway. Poison, he called it. He was condemned to these pants like a prisoner, reminding him of the incident that forever robbed him of his dignity. .. 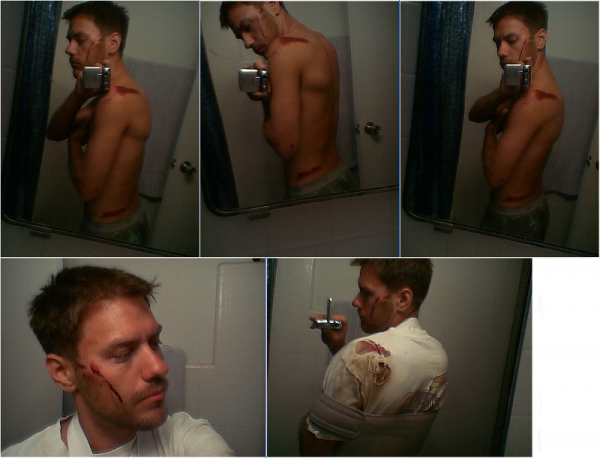 Became a little too secure on the line down the ridge — ended up driving my stick shift truck left handed for a while. – Jonathan Marshall

…  He looked towards the beach and it seemed a very long way.

As he tried to concentrate on never putting his foot down, the lagoon became increasingly shallow. He wondered how to stay on the surface as the sand grew closer and closer to his body. There was no choice but to put all his strength into swimming slowly on the surface, inch by inch. The darkness became more and more creepy with knowing that the Manta rays where watching him from below.

The laughing and splashing had abated and an eerie silence took its place. He could hear his own heart beat and felt desperate to relax his legs. He looked around him and saw two other boys, doing the same. The canoe stayed close and all the kids held their breath. Time stood still and his arms and legs ached. He had to continue, no matter what. He could feel the tension in the air and realized the darkness had taken over and he couldn’t see the beach. He tried to focus on the canoe and follow it as close as possible…

…While coming back from Tawang towards Guwahati, we crossed a place called Tangla. The convoy was proceeding smoothly until we found a fallen tree on the road. We stopped.   Then the convoy came under heavy fire from behind the trees and rocks on the mountains. Our protection was caught off guard.

Scared is an understatement to describe the feeling of hearing the whishing sound of bullets fly by. We were led out behind the vehicles and an outcropping of rocks while gunfire continued.   A soldier caught a bullet in the calf muscle and fell a couple of feet from me. I pulled him into the cover and held his gun…

Tagged
Contests
What did you think of this story?
Meh
Good
Awesome