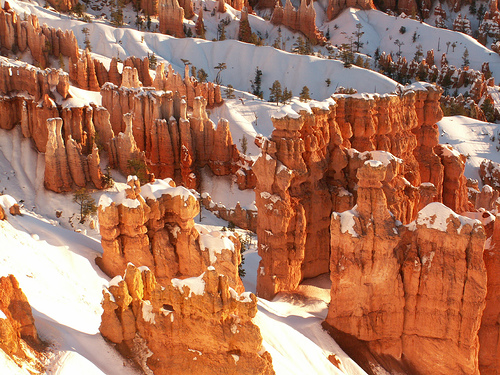 Quick follow-up to yesterday’s post about the Proposition 8 protests in California and across the States this weekend:

Meg Massie over at Gadling reports that at least one gay rights activist, John Aravosis, is calling for travelers to boycott Utah this ski season.

Utah, of course, is home to the headquarters of the Mormon Church, which reportedly poured tens of millions of dollars into a campaign in favour of California’s Prop 8.

Meg wrote: “[Aravosis is] calling for skiers to choose anywhere but Utah this winter, and he’s even urging Hollywood to back out of the annual Sundance Film Festival, which makes up a huge part of Utah’s $6 billion annual tourism income.”

It’s an interesting idea – I have no idea whether it will take hold, but it’s worth noting that the passage of Proposition 8 seems to have awakened a new spirit of protest in the gay rights movement, with a feistier edge to it than I can recall seeing in recent years.

Case in point: another blog post I came across just a few minutes after Gadling’s:

“I strongly support civility in this struggle,” the Atlantic’s Andrew Sullivan wrote in a post titled The Mormon War on Gay People. “Religious services and practices should be scrupulously respected.”

But when a church, like the Mormon church, makes a concerted effort to enter the public square and strip a small minority of basic civil rights, it is simply preposterous for them then to argue that the Mormon church cannot be criticized and protested because they are a religion.

I have never done anything – nor would I do anything – to impede or restrict the civil rights of Mormons. I respect their right to freedom of conscience and religion. In fact, it is one of my strongest convictions. But when they use their money and power to target my family, to break it up, to demean it and marginalize it, to strip me and my husband of our civil rights, then they have started a war.

And I am not a pacifist.

This new, glass-domed train will take you on an epic journey through the Rocky Mountains
A time capsule from the north pole just washed up in Ireland
Costa Rica is giving away 15 free trips in 2021, and you can nominate your loved ones
Scotland becomes the first country to make period products free
Arctic Norway will soon be home to the world’s first energy-positive hotel