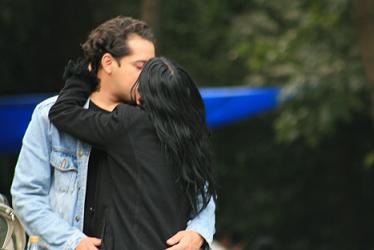 Jail time for kissing in public? For using slang in the street?

The mayor, who belongs to the conservative right-ring National Action Party (PAN), justified the law by stating that kissing in public embarrasses children. To which I respond: Since when are laws made according to what embarrasses four year-olds?

I’m not the only one who finds the law ridiculous: university students took to the streets in Guanajuato to protest, UNAM law students wrote up a petition and sent it to the mayor, and activist and ex-PRI member Gerardo Fernandez Noroña organized a “collective kiss” (which, before anyone gets any salacious ideas, occurred mostly between family members—Noroña kissed his young niece) in Mexico City to protest.

Meanwhile, senators from the PRI (Institutional Revolutionary Party) and the PRD (Party of the Democratic Revolution) spoke out against the law as retrograde, barbaric, and medieval. The latter party pledged to begin an investigation to see if the law violates the Mexican constitution and impedes on individual human rights.

Many have speculated here in Mexico that the law is an attempt by the PAN to distract attention from the growing violence between drug cartels, the contested 2006 election, and widespread government corruption. PAN rule has seen a terrifying wave of violence sweep Mexico, with daily executions and assassinations of police chiefs and judges.

The mayor’s “freezing” of the law mere days after passing it tends to support this view. Supposedly, the law is merely being put on hold while the government begins a campaign to educate citizens about it. I wonder: Educate citizens? Are there going to be how-to-not-kiss-in-the-street and how-to-not-block-the-sidewalk classes for Guanajuato’s citizens?

The new law points to an alarming trend in Mexico: the creeping influence of the church, and particularly the Vatican, in state affairs. Just as the Bush administration mixed right-wing politics with conservative religious values in its law-making, the Calderón administration is taking controversial steps closer to the Catholic Church, despite public outcry about the disintegration of the laic state.

COMMUNITY CONNECTION:
What do you think about the no-kissing law? Sound off in the comments below!