Editor’s Note: Quebec City’s Fêtes de la Nouvelle France Festival starts tomorrow and runs through August 10. Matador member Linda Handiak has attended past festivals, and offers an insider’s look at what you can expect from this year’s event.

Gathering my long skirt in one hand, I negotiate the steep incline guarded by a brooding, gimlet-eyed wall. If this weren’t a festive occasion –and we were in the 17th century – those gun-slots might not be empty. As I approach the top, a man in a lace-trimmed shirt removes his plumed hat and bows.

Four hundred years old and Quebec City’s still got it.

Now, instead of repelling British invaders, Quebec is drawing hordes of tourists.

The Fêtes de la Nouvelle France is a re-enactment of daily life in the 17th and 18th centuries, when Quebec was called New France. This year’s event, held from August 5th to the 10th, promises to be more flamboyant than ever since it coincides with the city’s 400th anniversary. Age has its privileges: Quebec is North America’s only remaining fortified city, and the old quarter is classified as a world heritage site.

Held within the walls of Old Quebec, the festival is an occasion to live out childhood fantasies by donning a bodice and gown and mingling with thousands of actors and visitors representing people from the past.

It’s easy to suspend disbelief. I ask a woman spinning flax into linen how long it takes to make enough for a smock. “Well,” she says with a straight face, “I try to find time between milking goats, making bread and feeding a family of seven.” I have to think for a moment before I remember that she’s answering in character.

Further on, two bristly fur traders are leaning against the wall of a First Nations gift shop. Their job was to transport pelts from the natives to trading posts in Quebec City and Montreal, but right now they are focused on the actresses folding laundry across the street. The girls are playing filles du roi, orphan girls from France, sent here in the 17th century to start families. The flirting is understandable, considering that in 1627 there were only about 5 women for 60 men!

I stop for a moment in the shade of Felix Leclerc Park, at the foot of the funicular that scales the side of this cliff top citadel. A raconteur, or storyteller, is weaving suspense with his hands and his words. He has his work cut out for him since this is the Petit Champlain district, a colorful alley of distracting clothing, art and native craft boutiques.

The aromas wafting out of the street’s fine restaurants make me hungry, so I visit some of the festival booths. Bread, made in an outdoor oven, pure maple candy and goat cheese are among the goodies on sale at the traditional market.

Down in Place Royal, the cobblestone square where Quebec’s first permanent settlement was born, a booth has been erected for wine tasting. As I sip a crisp white Bordeaux, a man in a velvet waistcoat and long, curly wig raises his glass. Is it the wine or am I looking at Jean Talon, business manager of New France in the 1700’s? It’s hard to distinguish the actors from the tourists, until the costume contest starts. 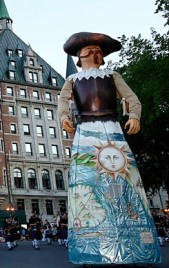 Soaking up the ambiance and street performances are free, but you need to purchase an $8 token for access to certain exhibitions and concerts.

Highlights include First Nations Ceremonies, performances by Cajun bands as well as folkloric troubadours and dancers, a procession of giant historical figures and a Beaujolais wine tasting.

Festivities continue in the evening. You may even want to venture out on a ghost tour (www.ghostoursofquebec.com).

For cheap sleeps right in the heart of Old Quebec, the Auberge de la paix (http://www.aubergedelapaix.com/) is more intimate than your average hostel, with rooms accommodating from two to seven people. The mattresses are thin, but the rooms and facilities are clean, and the courtyard and exposed brick contribute to the illusion of time travel. The hostel is a few cobblestones away from Pub Saint Patrick, which serves hearty portions for digestible prices. If you’re there on a Friday evening, you’ll be treated to live Irish music.

For more information about events or about dressing up appropriately (optional), visit www.nouvellefrance.qc.ca/en.

Tagged
Music + Nightlife Québec, Canada
What did you think of this story?
Meh
Good
Awesome