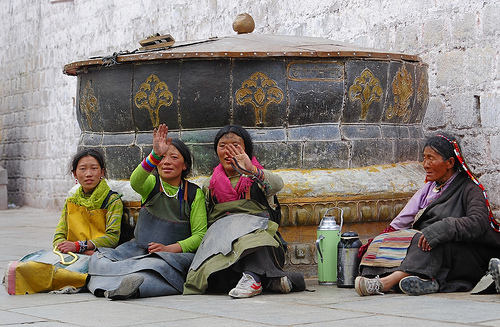 The Dalai Lama has been denied a visa for a major international peace conference to be held in Johannesburg this week.

A spokesman for the President claimed the move was intended to prevent any distractions in the lead-up to the FIFA World Cup, being held on the African continent for the first time next year — but the truth behind the move came out when he added that South Africa has benefited greatly from a strong trading relationship with China.

Archbishop Desmond Tutu, famed anti-Apartheid activist and — like the Dalai Lama — a Nobel Prize recipient, has announced that he will boycott the conference in response.

Former President F.W. de Klerk, another Nobel laureate for his role in releasing Nelson Mandela and ending the Apartheid era, joined Tutu in condemning the move and vowing to boycott. From his statement:

The decision to exclude the Dalai Lama is irreconcilable with key principles on which our society is based including the principles of accountability, openness and responsiveness and the rights to freedom of expression and free political activity. South Africa is a sovereign constitutional democracy and should not allow other countries to dictate to it regarding who it should, and should not admit to its territory – regardless of the power and influence of the country.

There’s been no response as of yet from Mandela, yet another Nobel Prize recipient who’d been slated to attend.

I’d be curious to hear his thoughts, though — after all, while he spent decades in prison, many of his fellow leaders in the anti-Apartheid resistance were in exile overseas, trying to raise awareness and stir up support for their cause.

I think I know what he would have said, then, about any country that bowed to the Apartheid state’s demands to deny them visas.