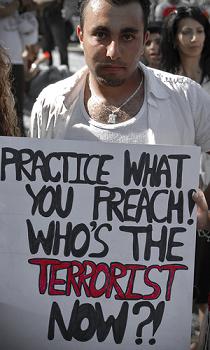 Over in Slate, in a piece titled Terrorists, Dissidents and Copy Editors, Christopher Hitchens tracks the shifting language used by journalists to describe the perpetrators of violence in both Iraq and Northern Ireland.

There is some debate as to whether AQM is a spontaneous local response to the American occupation, or a more calculated, opportunistic group with ties to Al-Qaeda proper — and, as Hitch writes, “at least this ponderous formulation expressed the ambiguity.”

Dropping that ambiguity, he argues, lends the group greater legitimacy.

Similarly, the perpetrators of the recent attacks in Northern Ireland, splinter groups of the IRA who refuse to participate in the peace process, are now being referred to as “dissidents” — a term which, Hitch writes, “describes only attitudes and not actions, and it is most famously associated with the intellectual opposition to Soviet totalitarianism.”

He goes on: “Plainly, something has been lost when such a historic term of honor and respect is loosely applied to homicidal thugs who shoot a Catholic policeman in the head and use pizza delivery workers as human shields.”

…If you want a quick definition of euphemism, this would do: It consists of inventing nice terms for nasty things (perhaps to make them seem less nasty) and soft words for frightening things (perhaps to make them seem less scary). We should have learned by now that this form of dishonesty is also a form of cowardice, by which some of the enemy’s work is done for him.

Fine points, all, and I’m glad to see someone is carrying on Orwell’s mission to monitor the use of language, and its enormous consequences.

But I’d be a lot more convinced that Hitchens really means what he says, if he didn’t refer to the US-led invasion of Iraq as “the coalition intervention” throughout the article.

What was that about “inventing nice terms for nasty things,” again?

39 of the most breathtaking natural wonders in the world
Flights to nowhere are growing, and they’re an insult to the planet
Stay overnight in a fire lookout tower for a sky-high wilderness escape
David Attenborough joins Instagram and gains millions of followers in just one day
Video shows the terrifying moment a massive iceberg flips over on two ice climbers