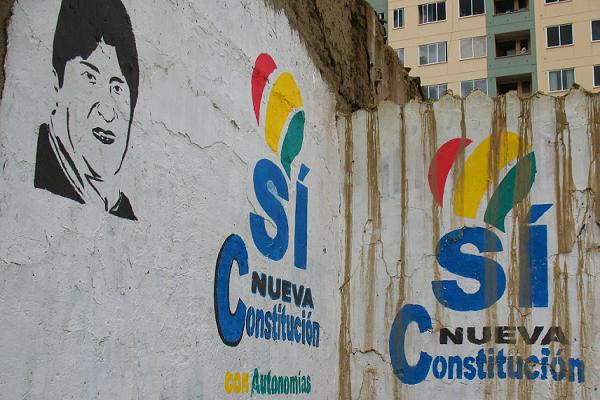 For Morales, the passage of the constitution marked the long-awaited fulfillment of a campaign promise that aided his election as Bolivia’s first indigenous president three years ago.

That promise was to redefine how the country viewed its native majority, to erase the privilege bequeathed to the descendants of European conquerors, to create a Bolivia where equal rights for all was a legally enshrined doctrine.

Between then and now, the path to Sunday’s vote had, at times, seemed to slip away. Following political clashes over the drafting of the constitutional document and violent confrontations in the streets that claimed dozens of lives, the referendum was postponed on three separate occasions.

Many feared January 25 would bring more of the same.

Not this time. The vote went off smoothly, praised by both international monitoring agencies and neighboring Latin American leaders happy to witness a peaceful display of Bolivian democracy.

In fact, the entire campaign was marked by a peculiar absence of emotion on the ground. Here in the central highland capital of Cochabamba, a few late rallies, a fair amount of graffiti, and the odd loudspeaker truck kept focus on the issue, but there was none of the passionate collective action that characterizes Bolivian political campaigning, particularly in the age of Evo.

Perhaps everyone was ready for a conclusion.

A tremendous calm settled over the city on Sunday—notably enhanced by the ban on vehicle traffic and alcohol sales—as citizens carried out the solemn obligation of casting a ballot. True to predictions, the “si” contingency won the day with roughly 60% of the vote.

But such tranquility is deceiving.

A closer look at the numbers details a nation starkly divided between the indigenous Andean provinces of the west, which backed the referendum by a ratio of 3 to 1, and the wealthier lowland regions to the east that handed Morales a 2 to 1 reprimand.

And what the campaign lacked in grassroots activity was made up for on the airwaves, ablaze with inflammatory and often utterly irrational rhetoric.

Opposition ads claimed, for instance, that the constitution would abolish Christianity, promote abortion and homosexuality, divvy up all current land holdings, and otherwise transform Bolivia into a rabidly pagan, socialist state.

The truth is that many of the articles originally proposed were so watered down over the months of heated negotiation and political maneuvering that they drew equal criticism from left and right. A rundown of major changes actually included in the document can be found here.

It wouldn’t be inaccurate to suggest that the vote was as much a referendum on Morales himself as the adoption of a new constitution… on his beliefs that the country’s indigenous peoples should be given a greater voice, that the government should exercise greater control over natural resources, that the majority of Bolivians have toiled too long under the yoke of oppression.

The sad reality is this means relatively little. Before anything changes in the day-to-day lives of the people here, before Bolivia can be “decolonized,” Congress must undertake the tedious process of crafting new laws to concretize the principles advocated in the document.

And, with the division between rich and poor, European and native, “no” and “si” unmitigated, that task is going to be as difficult as ever.