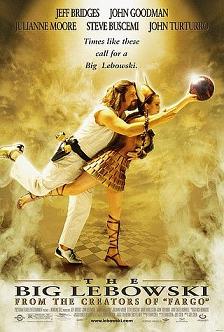 THEN, IN THE YEARS that followed, something funny happened: that same movie became, in the words of Rolling Stone, “the most worshipped comedy of its generation.”

That flick was called ‘The Big Lebowski’ – and on its tenth anniversary, I’m pleased to announce that I finally know why I, and many other theater-goers, just didn’t quite get it when the Dude first walked onto our screens.

So why the dramatic shift in popularity?

Like so many geniuses, the Dude was simply ahead of his time.

According to Rolling Stone’s Andy Greene, the Dude represents everything that we long for in the post-Y2K world.

Sure, those yearnings existed in 1998, but before 9/11, Blackberries, and reality TV, they weren’t quite so powerful or finely honed.

Early in Lebowski, the narrator (a cowboy named the Stranger, played by Sam Elliott) intones, “Sometimes there’s a man, who, well, he’s the man for his time ‘n place.” The odd truth is this man — the Dude — may have been a decade ahead of his time.

Today, as technology increasingly handcuffs us to schedules and appointments — in the time it takes you to read this, you’ve missed three e-mails — there’s something comforting about a fortysomething character who will blow an evening lying in the bathtub, getting high and listening to an audiotape of whale songs.

Slate’s David Hagland agrees that ‘Lebowski’ was ahead of its time, but sees the movie’s relevance today in even more specific terms. The Coen Brothers, he argues, accurately and eerily created the sort of character who would later dominate American politics:

The Dude is indeed a fantastic character. Ten years on, though, the movie’s most striking role belongs to John Goodman as Walter Sobchak: a hawkish, slightly unhinged Vietnam vet and the Dude’s best friend and bowling partner.

Watching The Big Lebowski in 2008, it becomes clear that appreciating Walter is essential to understanding what the Coen brothers are up to in this movie, which is slyer, more political, and more prescient than many of its fans have recognized. Perhaps that’s because Walter, with his bellowing, Old Testament righteousness and his deeply entrenched militarism, is an American type that barely registered on the pop-culture landscape 10 years ago.

Grab a White Russian and click those links – both essays are well worth reading in full.

Even back in 1998, you knew us better than we know ourselves.

21 drinking games you can play in any bar
The 50 greatest campfire songs of all time
Drink your way across Texas wine country on this Christmas wine train
How to plan for 2021 travel in the age of COVID, according to 23 travel agents
This map of the US compares state populations to that of world countries

This company will pay you $1,666 to listen to true crime podcasts this Halloween

May 7, 2020 Elisabeth Sherman
✖
travelstoke
Download the mobile app
stoked by