In Santiago, Chile a city of seven million inhabitants, thousands of miles from what we have all been trained to refer to as “ground zero,” a major street that runs through the upper-middle class neighborhood and shopping district of Providencia is named September 11th.

Properly, it is called “Once de Septiembre,” and it might seem to Americans that Chile is recognizing “our” September 11th. In fact, an art display just steps from the presidential palace, and in front of the country’s left-leaning newspaper, La Nación’s headquarters is a small art show, with front newspaper pages depicting the events that transpired on September 11th, 2001. Beside it is a small photo exhibit of peaceful New York, with the towers still standing.

But the story in Chile predates “our” September 11th by nearly two decades.

September 11, 1973 was the day on which the military coup, or golpe militar, changed Chile’s political reality. President Salvador Allende died during the attack on La Moneda, the presidential palace, and this day began nearly 17 years of what is commonly referred to as the bloodiest dictatorship in Latin American history, headed by Augusto Pinochet, with links to the U.S. government.

Over the course of the following nearly two decades, thousands were killed or “disappeared,” and tens of thousands incarcerated. Some 200,000 people went into exile. Many went to Europe if they could, such as current President Michelle Bachelet’s family, which fled to East Germany, or to neighboring Latin American countries such as Peru and Argentina, if they could not.

For those who stayed, many were “internally exiled,” relegated to far-flung zones with little or no contact with their families. Neighborhoods were redrawn and residents of encampments scattered into the periphery of the city, where new, poorly-served areas would be constructed. They exist to this day.

People in Chile blame the dictatorship for some of society’s ills, for the class-based oligarchy that exists in current day Chile, for the rifts between families and lost sons and daughters, parents and grandparents. But among Chilean society also walk Pinochetistas, supporters of the dictatorship and what it stood for, and the relative economic stability they say it has brought. It was these people who mourned Pinochet’s death in December, 2006, holding vigil outside of the Escuela Militar, while smaller anti-Pinochet demonstrations rocked other areas of the city. 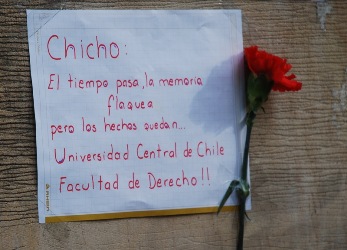 Since Pinochet’s death, the demonstrations to which Chileans have become accustomed on September 11th have shrunk in violence and timbre in recent years. Though violent demonstrations take place in some of the poorer, more densely-populated outlying areas, the activity around the Moneda and in more central areas has been tense, but civil for the most part.

People place red carnations and notes to and for the disappeared or killed, around the statue of Salvador Allende, and in other key spots. All the while the police keep crowds moving, keep the teargas poised for launching, and the guanacos, or water cannons, are ready to be fired should the need arise.