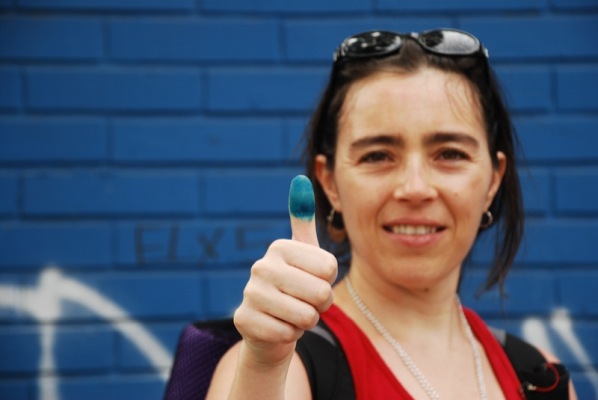 An inked finger is evidence that this woman has voted. Photos courtesy of author.

Michelle Bachelet, Chile’s first female president, is finishing her term, which means Chile’s election season is about to get underway.

Bachelet will not run for re-election, as Chilean law prevents presidents from campaigning for a consecutive term after their first four year term has lapsed.

As the next election cycle gets underway, the question on everyone’s lips is, will the centrist-socialists (Concertación) pull off the vote again for a fifth consecutive win, or will the political right (Alianza) be swept in on an upset?

Chilean law requires that the president must win with more than 50% of the popular vote, and the 2005 election results had no clear majority, so the country held runoff elections. Bachelet (Concertación) won 53.49% of the runoff vote, and left Sebastian Piñera (Alianza) in second place, with four years to fortify his position for the December 13, 2009 elections. 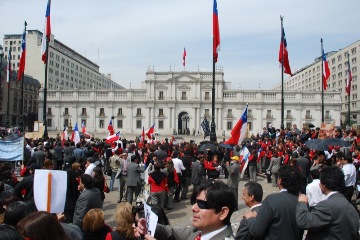 Since the dictator Augusto Pinochet left power and democracy was restored to Chile in 1989, the nation has held four presidential elections, each of which has resulted in a win by the centrist-socialist Concertación group.

Of these candidates, first-round interviews of the public conducted by national newspaper La Tercera in late April indicated that Piñera (Alianza), the economist and investor who is responsible for bringing credit cards to Chile, is in the lead, with 30% of voters planning to cast their vote for him.

Frei (Concertación), who recently claimed himself to be heir to Bachelet’s presidency and said the Concertación always wins because it promotes progress for the nation and its people (reported on Radio Biobio, August 23, 2009), is in second place with 25%.

Dark horse Ominami (Concertación) who comes further from the left, has already garnered 21% of the intended vote according to the survey. He’s the son of the leader of Chile’s Leftist Revolutionary Movement (MIR) is just 36 years old.

Campaigining in Chile will not begin in earnest until one month before the election, when flag-waving, sandwich-boards, bulletins and telephone campaigns are legally permitted. Chile has universal suffrage, and voting is compulsory for registered voters (with some exceptions), who are subject to fines if they do not comply.

Approximately 8.2 million Chileans were eligible to vote in last year’s election, and those having reached the age of majority may register to vote this year by September 13. The election will be held December 13.

Interested in learning more about Chile? Check out these articles from our archives:

*7 Reasons to Learn Spanish in Chile

*10 Reasons to Base Your Study Abroad Experience in Chile