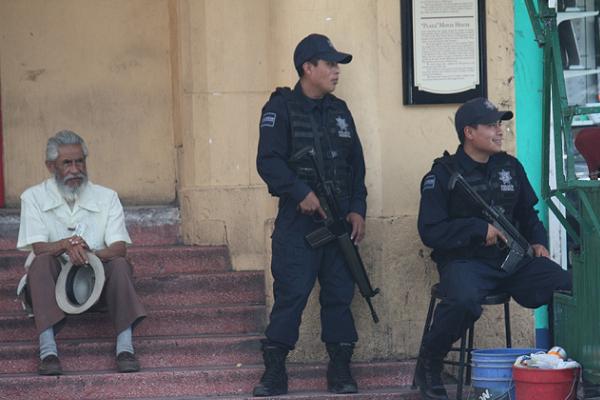 The emergence of armed vigilante groups threatening to take public security into their own hands has added a new sense of urgency to Mexico’s war against drug cartels.

One group, financed by businessmen from Ciudad Juárez, is threatening to kill a criminal every 24 hours unless the government takes visible action against rampant crime and corruption. The group, calling itself “Citizens’ Command For Ciudad Juárez” has set a deadline for July 5, stating that if the situation in Ciudad Juárez has not changed by that time it will follow through with its threats.

Ciudad Juárez has been one of the hardest hit by Felipe Calderón’s war on drugs. The city has long been one of Mexico’s most violent and dangerous, known for the unresolved rape, torture and murder cases of hundreds of women, and the violent battles between drug cartels.

Recent statistics reveal just how grave the situation in Ciudad Juárez has become—in 2007, the city reported 318 executions; in 2008, the number jumped to 1,653, and in 2009, the city has reported a record number of six executions daily. (Source: El Universal)

The emergence of paramilitary groups marks a disturbing step towards what some analysts have called the “Colombianization” of Mexico. In Colombia, paramilitary groups whose power spiraled out of control were responsible for some of the country’s most atrocious human rights violations.

And yet, many Mexicans seem willing to at least consider the possibility of entrusting their protection to armed groups of civilians, as drug-related violence and corruption are at an all-time high. Some make allusions to revolutionary heroes Emiliano Zapata and Pancho Villa, who stepped up to fight corrupt governments and defend the rights of the people. Others state that there is simply no reason to confide in the state, and that they are left with no recourse to defend themselves and their families. 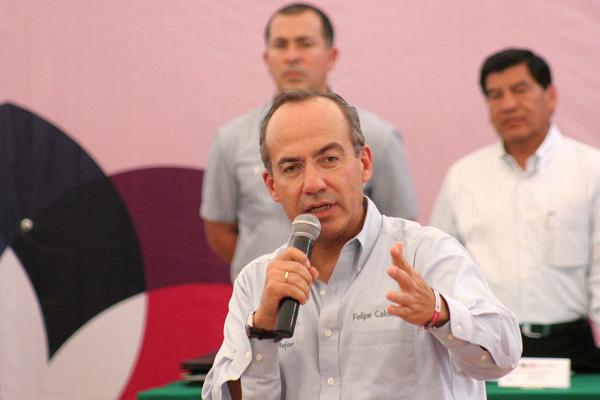 The surge of such groups, and the desperation driving people to support them, follow the arrests of corrupt officials at the highest levels of the Calderón administration. Since Calderón vowed to take a hardliner, get tough strategy on drugs following his election in 2006, violence in the country has skyrocketed, with 4,300 people dead in 2008 (a number nearly double that of 2007) and several bloody, high-profile assassinations of police chiefs, federal officials, and most recently, the newly appointed anti-drug czar.

Corruption, meanwhile, has proved not only unrelenting but also dangerously, and many say suspiciously, close to the President himself. In November of last year, Noe Ramirez Mandujano, the former head of Mexico’s top anti-drug unit, was arrested on charges of accepting monthly payments of $450,000 from the Sinaloa drug cartel.

Around the same time, both the former federal police chief, Gerardo Garay, and the head of Mexico’s Interpol operation, Ricardo Gutierrez (also one of the top-ranking officials in Mexico’s FBI, known as the Agencia Federal de Investigacíon), were arrested for taking bribes from and providing information to the Sinaloa cartel.

These are only the most spectacular examples. Corruption is so widespread that in June of 2007, Calderon replaced all of the country’s federal police chiefs in one fell swoop. That, however, did not prevent the need for Operacíon Limpieza (translated as Operation Clean House), initiated in July of 2008, in which the aforementioned high-ranking officials (as well as more than 30 others) were arrested.

Rumors circulate that the government is allied with the Sinaloa cartel, and is protecting the cartel ( link in English) while cracking down on the others.

Factual evidence seems to support this accusation: every high-ranking official arrested in the past several months on corruption charges was associated with the Sinaloa cartel, and while more than 600 members of the Gulf Coast cartel and the leaders of both the Tijuana and Beltran-Leyva cartels have been arrested, the leader of the Sinaloa cartel, Joaquin “El Chapo” Guzmán, is still at large.

Many argue that Calderón’s administration is pursuing a flawed strategy of attacking the cartels and their leaders, instead of working to improve Mexico’s failed and corrupt institutions. And while the Attorney General, Eduardo Medina Mora, recognizes the lack of transparency of these institutions and the need for reform, he relies on citing statistics of seized drugs and weapons to demonstrate the government’s progress. 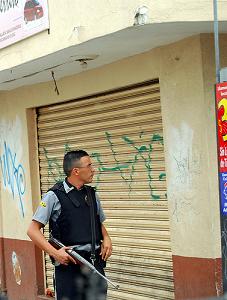 Meanwhile, the United States continues to provide a booming market for the cartels, with drug revenues ranging from 20 to 50 million dollars a year. The U.S also provides the vast majority of the weapons used by the cartels to wage war. Estimates put the number of gun shops on the U.S border around 7,000. These shops, and the numerous artillery shows that take place around the U.S/Mexico border, fuel Mexico’s drug lords with a wide variety of weapons, including assault rifles, grenades, and rocket-propelled grenade launchers.

“There are 7,600 gun shops within 50 miles of the Mexican border, and they’re selling primarily to drug lords,” former U.S National Security Advisor Robert Pastor told CNN, adding “We are part of this problem and we haven’t been significantly supportive.”

Recent meetings between Felipe Calderón and Barack Obama have seen both parties pledge further cooperation in the war on drugs, yet critics continue to question whether the money, weapons and soldiers being used to fight the war might not be better spent on rebuilding Mexico’s corrupt institutions, re-examining U.S weapons laws, and lessening the demand for drugs North of the border.

This small and remote Scottish island is looking for new residents
Italy is reviving a Black Death tradition by reopening ‘wine windows’
10 treasure chests containing $1 million each to be hidden across the US
Wombats are the heroes of the Australian fires, sheltering animals in their burrows
Study claims odds of catching COVID-19 on a plane are very small