Ed. Note: Matador author Robyn Johnson attended one of this past weekend’s massive protests, in San Francisco. Here’s her take on the scene. 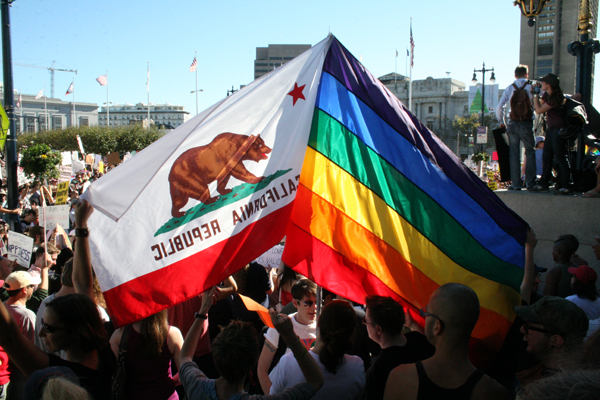 Tens of thousands took to the streets last Saturday in an unprecedented showing of support of the LGBT community and their right to the freedom of marriage.

From Los Angeles to Boston, Prop 8 protesters made it apparent that the fight for gay civil liberties is anything but a closed discussion. It also proved to be a tipping point in the public conscious.

For the demonstrations weren’t instigated by the usual gay advocacy organizations, but by a bottom-to-top effort from individuals on the internet, spurred by a website that called for a national day of protest, Join the Impact.

The road to equality will only be won by reaching across the aisle.

A 26-year old blogger in Seattle, outraged over the results of the election, created the site during her lunch break on Nov 7th.

The site quickly became a catalyst for person-to-person rallying, receiving more than 10,000 hits in the first few hours alone. 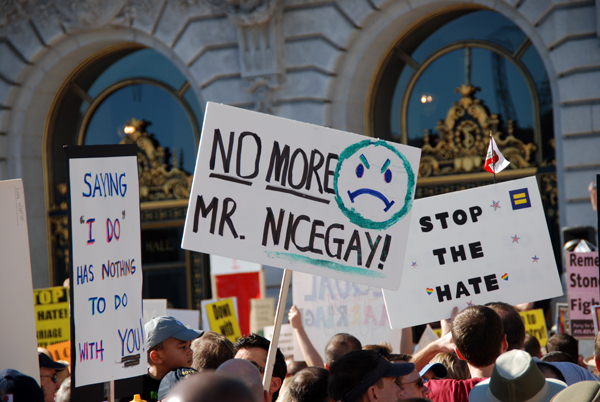 Facebook pages went up; people twittered, blogged, used their IM status messages, and made sure the message was passed along in perhaps one of the most inspiringly altruistic uses of social networking media.

The sense of community fostered on the web continued into the peaceful protests on November 15th as leaders from diverse religions, creeds, ethnicities, and sexual orientations declaimed to the crowds that the struggle over same-sex marriage is not an a question of traditional values but of tolerance.

The road to equality will only be won by reaching across the aisle, so to speak. 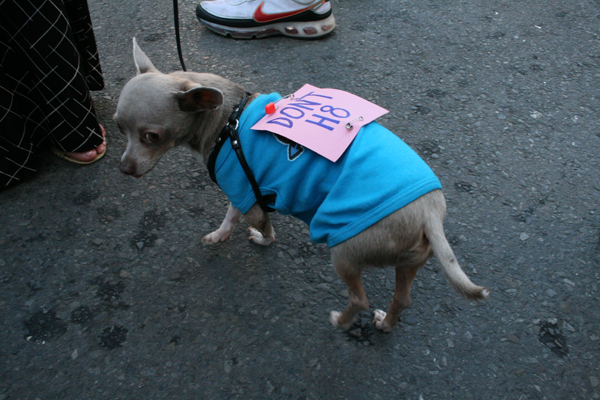 Reverend Amos Brown’s speech at the San Francisco rally illustrated the narrowing gap as he spoke frankly about the intersection of his faith and his ethics: “Though I’m a Baptist, I refuse to be a bigot.”

To reference Keith Olbermann, why does it matter who loves whom in an increasingly uncertain world? 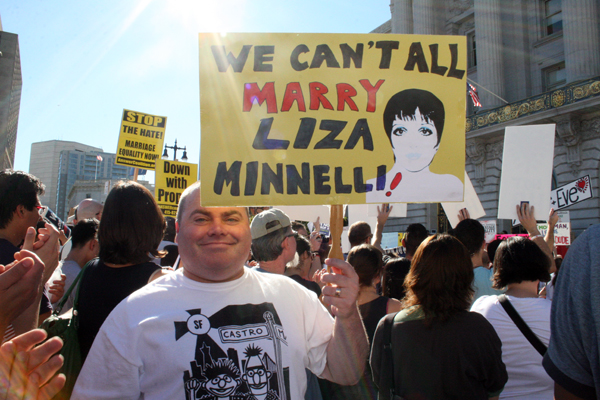 If Barack Obama’s election proves anything, it’s that the impetus of the world is moving towards cooperation – like the unity of the grass roots organizations that pulled together for these historical protests across the nation.

If humanity is going to solve the crises that beset our survival as a civil and peaceful species, drawing battle lines over the definition of love doesn’t even begin to make sense.

Join The Impact isn’t done yet: they’re calling for supporters to “call in gay” on December 10th.

Tagged
Activism News Photo + Video + Film
What did you think of this story?
Meh
Good
Awesome