ONE OF THE PREMIER DESTINATIONS in Europe is the Dutch capital, Amsterdam. Home to brilliant, centuries-old architecture, canals cutting through the medieval center, and world-class art and history museums, Amsterdam is also among the world’s most walkable (and bike-able) cities. These Amsterdam Airbnbs put you right in the middle of the action, located in the tops of buildings with terraces overlooking the old city, or on houseboats down in the canals. 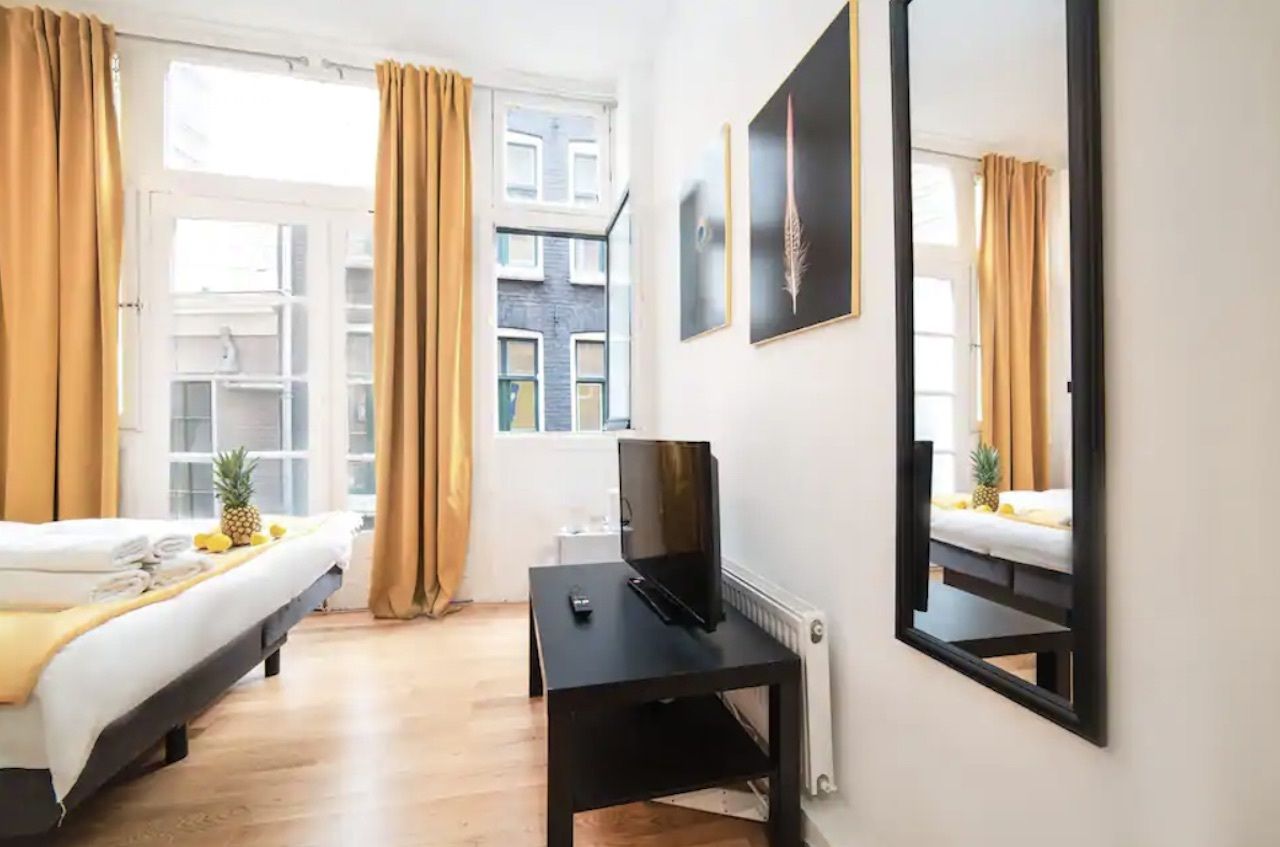 Just around the corner from Rembrandt Square in central Amsterdam, this sun-filled rental is located near Central Station and much of Amsterdam’s core. It’s a short walk to the flower market, the popular shopping street Kalverstraat, and the Royal Palace of Amsterdam. Gaze at an old-style Amsterdam alley from your bedroom window and if you need a break from the action in the city center, it’s a quick walk or bike to Amsterdam West.

A quirk of Amsterdam, a lot of its Airbnb lodgings are houseboats on the canals. This one’s particularly pretty. It’s close to the airport, about 25 minutes away from Amsterdam’s city center — but they provide free bikes to their guests. It’s perfect for a couple or two people who don’t mind sleeping close to each other as the water gently rocks through the night. The boat is solar-powered so on top of your bike commute around the city center, you’re looking at a highly sustainable stay.

Luxurious suite with canal view in heart of city 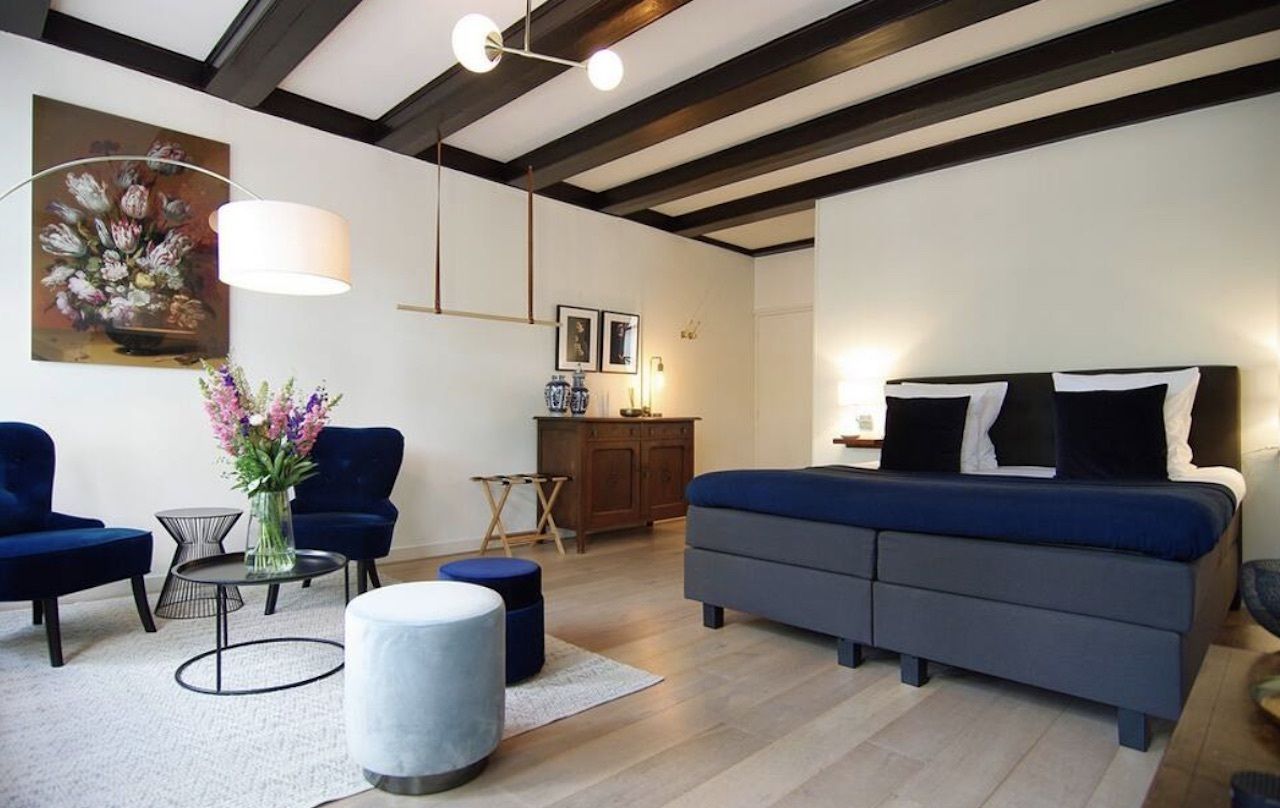 This guesthouse suite, located along the UNESCO World Heritage Herengracht Canal, was built in 1637. It’s designed for relaxing window-side with a beverage of choice while watching the canal and the city it traverses flow by down below — a unique take on a city known for action. Of course, the city center and its museums, cafes, and pubs are right there as well, so don’t get too settled in.

A common theme among Amsterdam Airbnbs is walkability. This spot in the De Pijp neighborhood is as walkable as they come — right by the old Heineken brewery, the Albert Cuyp Market, and the Rijksmuseum. Its obvious highlight is the outdoor terrace, coupled by the fact that the host allows up to four guests and at the current rate, each will spend more going to dinner in the city center than they will on a night’s stay. The unit is set up for remote work, with a dedicated workspace, and is only a five-minute stroll from the heart of Amsterdam and its best cafes, if a change of scenery is in order. 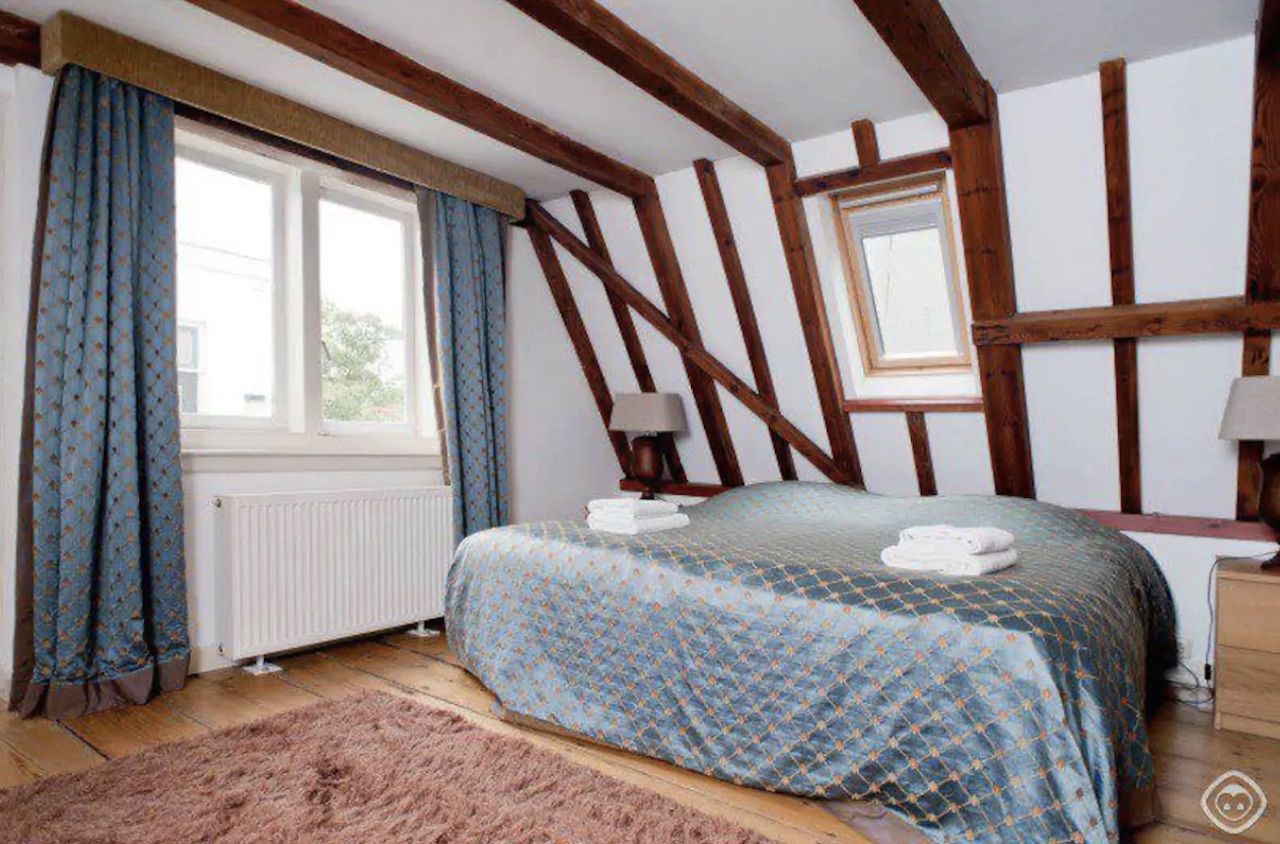 This penthouse is right in the center of Amsterdam along the Keizersgracht Canal and near Rembrandt Square. You’ll access via a private elevator, and enjoy a private canal view from the massive living quarters — this apartment sleeps 4 with lots of room to spare for activities, including running up and down the staircase to the even better view on the apartment’s second floor. Its price is reflective of its Euro-modern style — though the style points score quite a bit higher in the end.

This rooftop apartment in the dead center of Amsterdam overlooks Waterlooplein, the site of a daily flea market. There’s a broad terrace with an outside fireplace and shower. It’s within walking distance of basically everything you’d want to see in the city center, from museums to cafes to pubs and street spectacles on the square. Not that you’ll necessarily need it, but there is a fireplace in the unit, providing a good excuse to dedicate that all-season sweater you bought specifically for Amsterdam for outside — the-apartment excursions only.

This loft, in a building dating back to the 17th century, is directly above a cafe in Amsterdam’s heart. It’s around $879 per night but that can be split among up to seven guests — so bring the family or your full friend crew. The combo has two kitchens and four toilets, and the hosts make a note of being open to accommodate special requirements. Birthday trip, small-size family reunion, or coworkation — this is the best spot in the city for all three.

This 75-foot-long houseboat is on the Prinsengracht Canal right by the Noordermarkt in the Jordaan district. It used to be a cargo ship but has been renovated into a home with a lounge and central heating. It’s got the feel of a tour boat, with deck windows and skylights, and has a terrace perfect for sipping a cold beer or a hete koffie, before disembarking to walk the streets of the city center. The boat sleeps up to three people in two bedrooms. 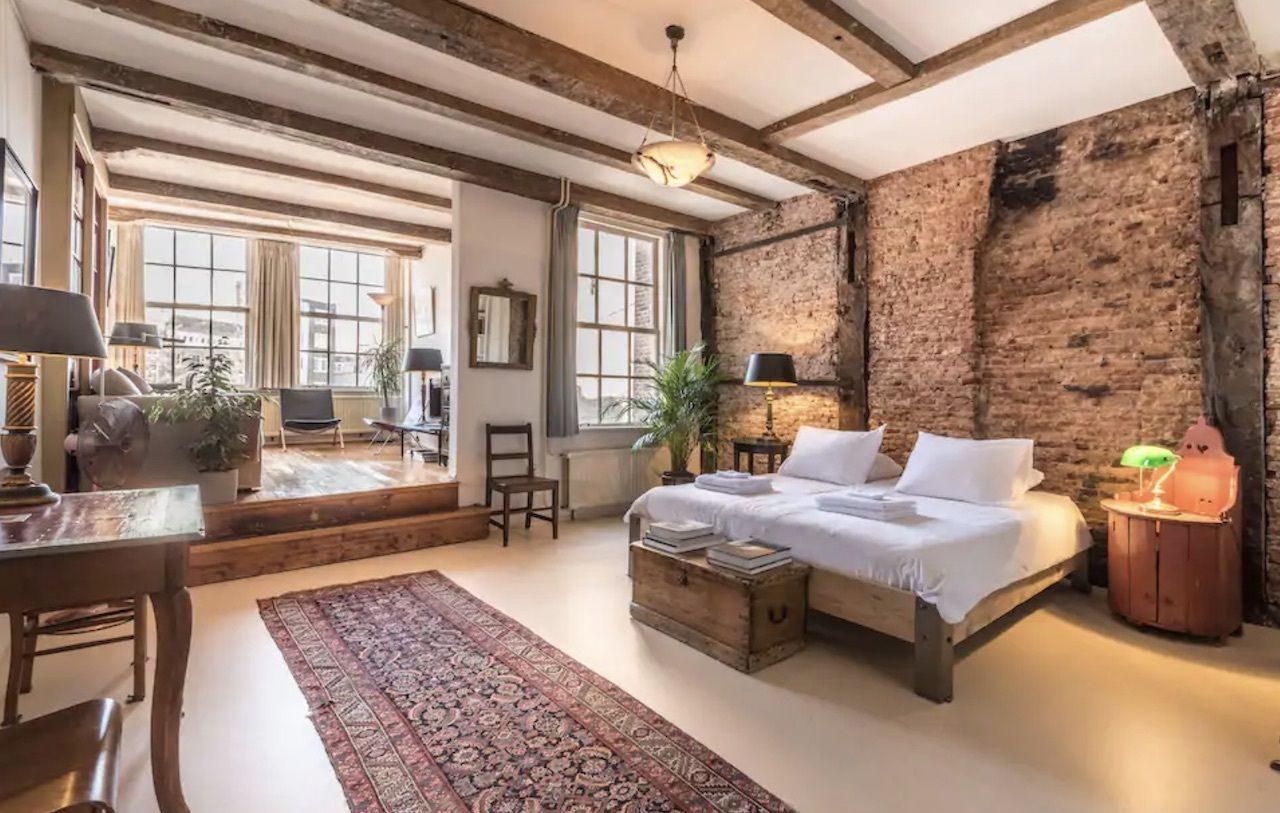 This upscale, double-bed room will likely be the oldest building in which you’ve stayed — circa 1608 — but is done up with modern European style including exposed brick walls, an open floor plan, and expansive windows looking out over the canal below. The unit features a large collection of books including some local guide material, an encouraging trip planning feature as most of the places you’ll want to eat at and tour are within walking distance. For the price, you won’t find a better deal in the city center.

Docked in Jordaan, a historic part of Amsterdam, this ship-turned-houseboat is appointed with a fire pit, kitchen, and skylights that let in a lot of sun. Because it’s near the central station, everything in the city is accessible. Staying in a ship is the best way to get both the big city cultural excursion without sacrificing cruise vibes, so your beach-going travel partner really has no excuse to not join you for at least a couple of nights. Up to four guests can sleep across the three bedrooms.

This loft in the De Pijp neighborhood is part of a former monastery, about a 10-minute walk from the Van Gogh Museum and the Rijksmuseum. It accommodates four adults and opens into an expansive garden, perfect for kids or a few minutes of solitude if traveling in a group. Dinner and drinks are equally as close as daytime attractions, as is a stroll along the canals or a bike ride through one of the central squares.

A version of this article was previously published on September 28, 2014, and was updated on March 3, 2021, with more information.

The Netherlands’ Most Iconic Symbol Is Actually From Turkey

May 10, 2022 Kirstie Hall
✖
travelstoke
Download the mobile app
stoked by