Nevada hardly gets the recognition it deserves for being the country’s capital of all things odd. It’s home to former nuclear test sites (and a whole tourism industry built around them), dozens of mining ghost towns, the alternate universe that is Burning Man, alleged alien experimentation, and endless expanses of desert that are thoroughly, exceptionally bizarre.

There are plenty of places here whose existence you never could have imagined — which makes what follows one hell of a road trip bucket list. 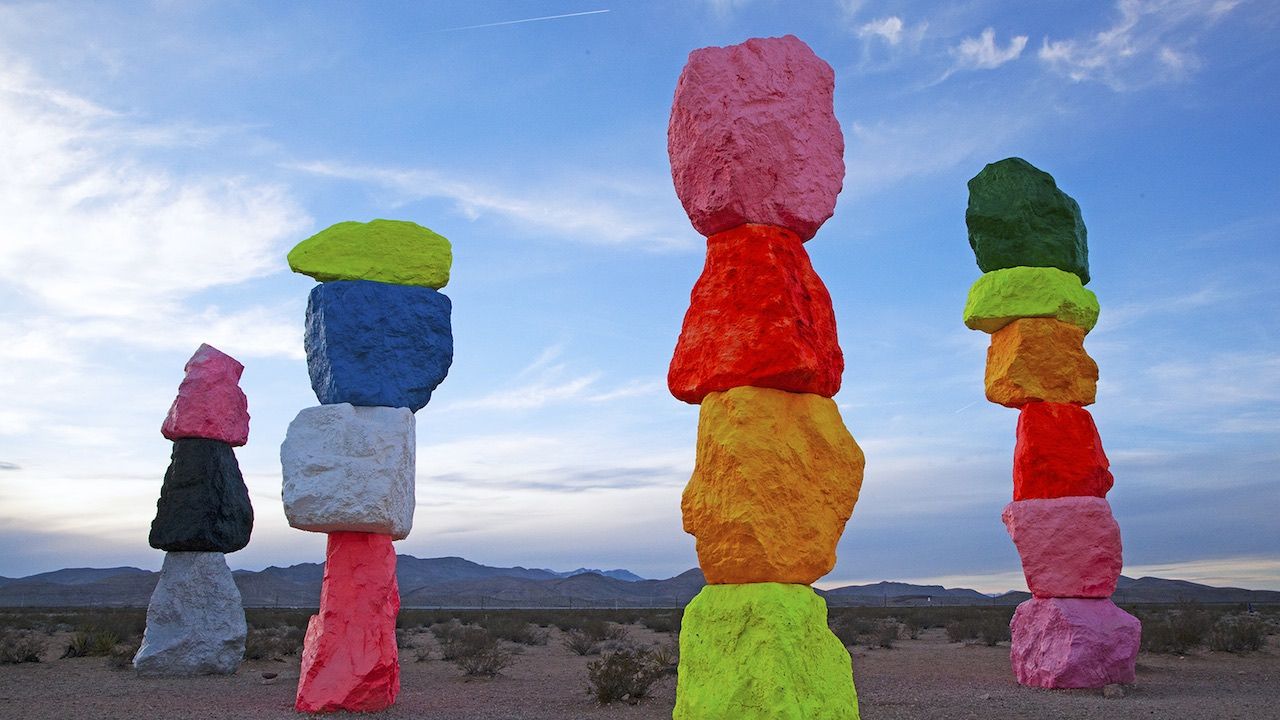 On your way into or out of Las Vegas, make a pitstop at Seven Magic Mountains, an eye-catching display of bright-neon outdoor art by artist Ugo Rondinone. Depending on your point of view, it’s either a powerful creative statement or the ultimate head-scratcher (generally, no one falls in between).

Regardless of your camp, what we’re talking about are seven 25-foot-high stacks of massive boulders, each painted an electric neon color, standing like psychedelic sentinels on the desert plain. It’s a work of Instagrammers’ dreams, and if you want to see it for yourself, sooner is better — it’s a temporary exhibition.

Construction on “City,” by artist Michael Heizer, began in 1972 — and won’t be completed until 2020. The massive sculpture is made entirely of dirt, rocks, and concrete, and it’s accurate to Heizer’s original plans down to a sixteenth of an inch. But what is it exactly? Well, a city. Kind of. The series of structures that comprise the complex reach up to 80 feet high and a quarter of a mile wide, and the whole thing is 1.25 miles long — roughly the length of the National Mall in Washington, DC — making it one of the largest sculptures ever built.

“City” is located in Hiko, about 50 miles from Rachel, in Nevada’s Basin and Range. It was begun as the artist’s response to the nuclear era in which we live, what he calls “the end of civilization.” It will have cost tens of millions of dollars to construct over nearly 50 years, but it’s intended to last for thousands of years into the future.

In Tonopah, in rural central Nevada, there’s a clown motel called the Clown Motel, and it is indeed a motel filled with clowns. Some might find it whimsical, but the rest of us will feel like we’re on a real-life horror-movie set — the presence of some 600 clowns in a desert motel will tend to have that effect.

Oh, and there’s an old cemetery next door (called, in fact, the Old Tonopah Cemetery) that dates back to 1901. Many of those buried there died either in the Belmont Mine Fire — a tragic mining accident at the boomtown’s silver mine — or from the mysterious “Tonopah Plague” of 1902.If ever there were a Wild West cemetery likely to be haunted, this would surely be it.

A retired middle school teacher by the name of Steve Springer is the “Dino Man” behind “the Dinosaur House” in Henderson, a suburb of Las Vegas. With more than 40 wacky sculptures on display, including lots of dinosaurs like “Tex” the T-Rex, Springer’s front lawn is open to the public for exploring and taking photos. Kooky comes in all shapes and sizes, after all.

Springer gets about 15,000 visitors each year — including neighborhood kids, tourists, and organized school trips — and the house is especially hoppin’ on Halloween. If he’s home, he’ll even give you a personalized tour and make it a fun, educational, and wholly unique experience for you and the kids. Totally not that strange if it’s just you, either. 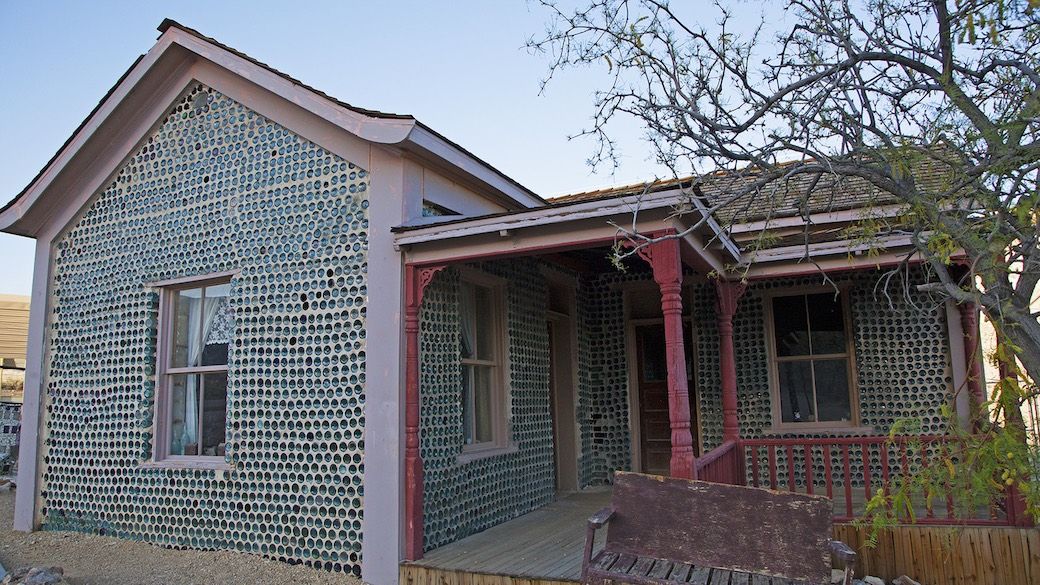 Back in the day, traditional building materials (like lumber) were a bit scarce in the deserts of Nevada. To make do, some locals constructed their homes out of glass bottles glued together with a mixture of adobe and straw. Somewhat amazingly, a handful of these old bottle houses still stand today. But if you can only see one, make it this one: Tom Kelly’s Bottle House, in the ghost town of Rhyolite.

Kelly built the three-bedroom house from some 30,000-50,000 individual bottles collected from local saloons, completing it in 1906. It’s the largest known bottle house of its kind and is a handsome home, even by today’s standards — back then it would’ve seemed like a miner’s mansion. In fact, it’s so grand that Paramount Pictures used it as a movie set in the early days of Hollywood, after which it served as a private residence once again all the way up until 1969.

There’s a lot to see in the remnants of the Rhyolite ghost town, and it’s definitely a worthwhile detour while you’re en route from Death Valley. From the bottle houses to the walls of century-old buildings that are still standing, Rhyolite is practically asking to be Instagrammed from every angle. But there’s way more “bizarre” in Rhyolite than just skeletal structural remains — it’s also the home of the Goldwell Open Air Museum, an outdoor sculpture park near the southern entrance to the ghost town. It was created in 1984 by Belgian artist Charles Albert Szulaski, beginning with his first piece, “The Last Supper,” a bunch of plaster ghosts staged in a modern-day representation of Leonardo Da Vinci’s famous fresco of the same name.

Szulaski followed with two more pieces, “Ghost Rider” and “Desert Flower,” and was joined by other European artists who wanted to create site-specific works in the desert. These include Dr. Hugo Heyrman’s “Lady Desert: The Venus of Nevada”; Dre Peeters’ “Icarus, Icara”; and Sofie Seigmann’s ceramic mosaic couch, which wasn’t originally created for the sculpture park but was salvaged after the artist’s residency at the Discovery Children’s Museum in Las Vegas (Goldwell has its own artist residency as well).

There are seven sculptures in total, and the park is free and open to the public 24/7. To call the collective effect of the works “haunting” is perhaps a bit on the nose — the whole “spectral sculptures on the edge of a ghost town outside Death Valley” thing — but it is all the same.

7. The Extraterrestrial Highway and alien tourism

Nevada has a niche alien tourism market, and that statement right there is enough to prove any claim to the mantle of strange the state could make. Area 51 gets all the pop-culture hype, but since it’s not a place you can visit (seriously, don’t try), you’re better off hunting for aliens elsewhere: the “Extraterrestrial Highway” (Nevada State Route 375), which runs along the northern edge of Area 51 and is a “power trail” for geocaching. This is where you’ll find the Alien Research Center, an alien-themed gift shop (just be sure to call ahead for daily hours); and the Little A’Le’Inn, an alien-themed diner and motel.

For those with a real passion for alien tourism, a little over three hours away on US-95 there’s also the Area 51 Travel Center, yet another alien-loving diner and gift shop that’s actually nowhere near Area 51. But for a chunk of “real” alien history, go on the hunt for “alien petroglyphs.” Yep. Those exist, and they’re legit. Nevada! 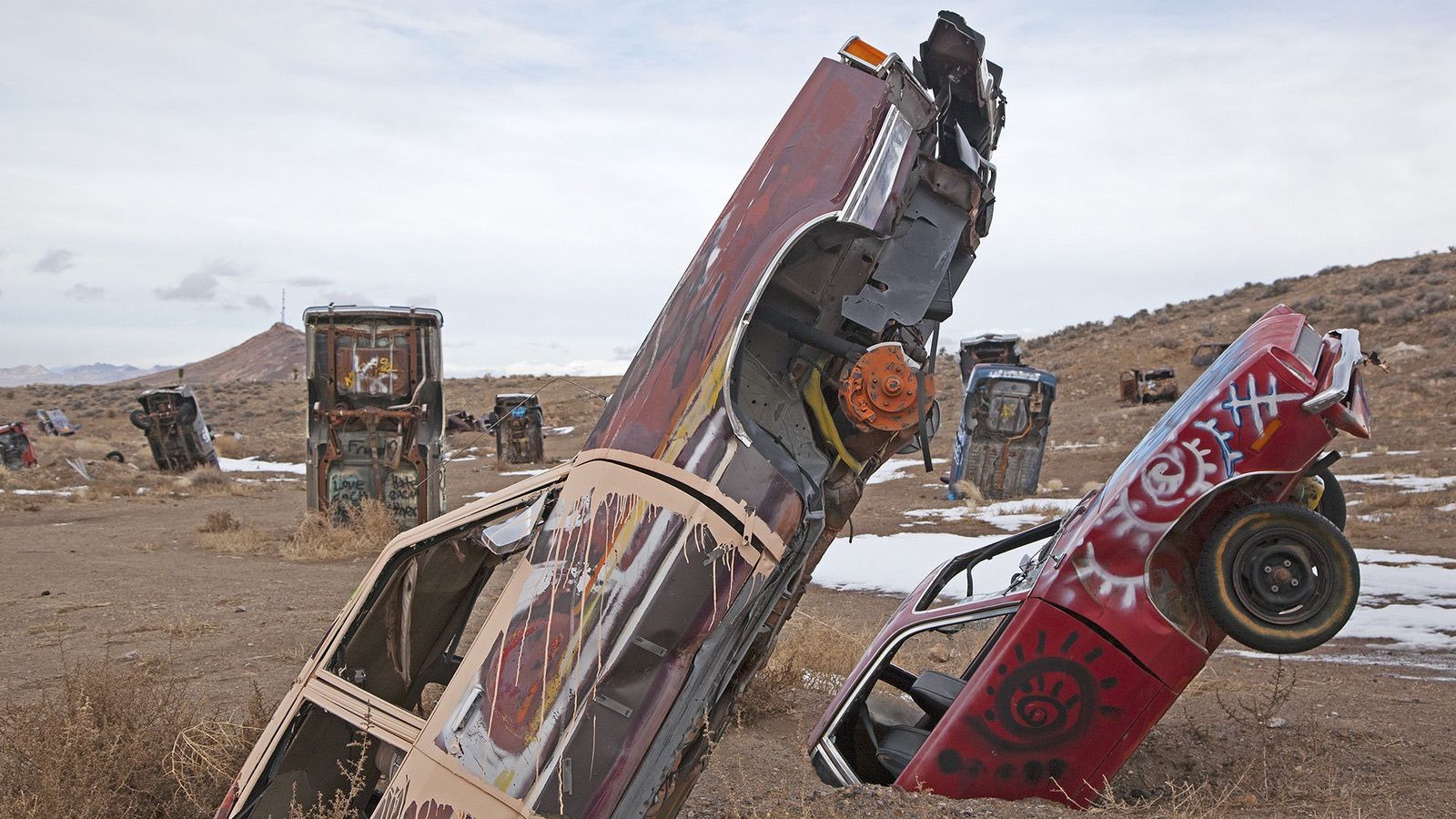 The International Car Forest of the Last Church, billing itself as the “World’s Largest National Junk Car Forest,” is literally a “forest” of junked cars, trucks, and even a bus, each with one end stuck in the ground and the other in the air.

With over 40 vehicles planted along a half-mile of land in the town of Goldfield (home to 200 permanent residents), the Car Forest is believed — at least by its creators — to be the largest such public art installation in the country. The vehicles themselves have served as canvases for the founding artists, Chad Sorg and Michael Rippie, as well as visiting artists and graffiti taggers. Goldfield never quite became the artists’ haven that Sorg and Rippie envisioned, but the decaying vehicles still stand as a testament to this truly bizarre endeavor.

Nonetheless, be sure to check out the town during your visit. The Goldfield Hotel is quite famously haunted (feel free to snap a photo of the exterior, but please don’t trespass), there are two old bottle houses still standing, the historic Santa Fe Saloon (one of Nevada’s oldest continuously operating businesses) is right here, and the Pioneer Cemetery is full of century-old headstones, even if the most famous of all has apparently been stolen.

9. Coffin It Up, Pahrump

Coffin It Up, affectionately known as “Coffinwood,” is a coffin manufacturer, coffin-themed store…you could pretty much describe it as the ultimate homage to coffins. Located about an hour outside of Las Vegas in Pahrump, Coffin It Up sells not just coffins, but also coffin-shaped furniture, coolers, wooden purses, whatever. The limits of your coffin-shaped dreams know no bounds in Pahrump.

And Coffinwood isn’t just a showroom of the company’s products — it’s the home of owners Bryan and Dusty Schoening, who make all of these products themselves. The property is filled with coffins of various sizes (and for various uses), several hearses, and two pet graveyards right on the front lawn. What’s more, you can also get married here — couples with more macabre tastes tie the knot onsite. (Tours of the property are available by appointment.) 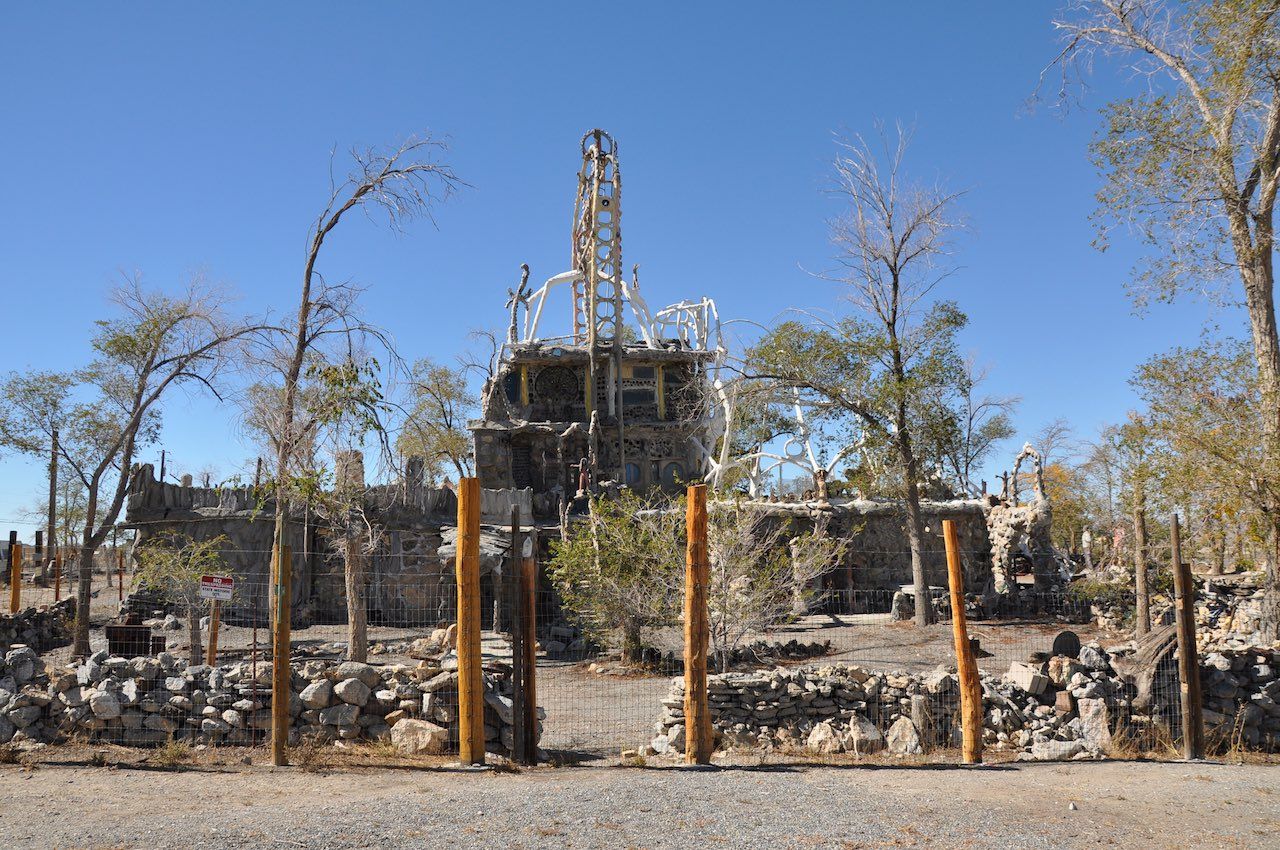 Whether Frank Van Zant, the creator and builder of the five-acre Thunder Mountain Monument, was a visionary or a lunatic is a judgment best left to the beholder. That is, whoever cares to take in this massive scrap structure fabricated from concrete, junk cars, and baby doll heads, among other things. No, this list isn’t getting less weird.

The various statuary and tableaux found throughout the park depict historic massacres and betrayals of American Indians, and a grinning devil statue greets visitors at the entrance (Van Zant was of American Indian heritage and went by the name Chief Rolling Mountain Thunder). The pieces are largely made of found items, and somehow the conglomeration of trash truly turned into treasure. Years of design transformed the collection into a rock garden, a memorial, a place of silence and mystery. The soaring concrete arches that top the roof are in themselves a reason to visit.

Though sections have collapsed, burned, or been vandalized over the years since Van Zant’s death in 1989, much of Thunder Mountain remains intact, and it has been declared a State of Nevada Historic Site Restoration Project. And a bizarrely beautiful one at that.

This post is proudly produced in partnership with TravelNevada.
Tagged
Travel Nevada, United States Nevada: A State Apart
What did you think of this story?
Meh
Good
Awesome
✖
travelstoke
Download the mobile app
stoked by