Hitting the hotel pool used to be little more than letting your kids blow off some steam while you got an overpriced drink in a plastic cup. But just as expectations for everything about hotels have been raised, so have the standards for hotel pools. Now, they’re an amenity up there with restaurants and fluffy robes, a place not only to cool off but also take photographs and make friends back home jealous. Hundreds of hotels and resorts around the world have added pools with views overlooking the ocean, mountains, and even red-rock canyons. Here are the 13 that are most worth seeing for yourself. 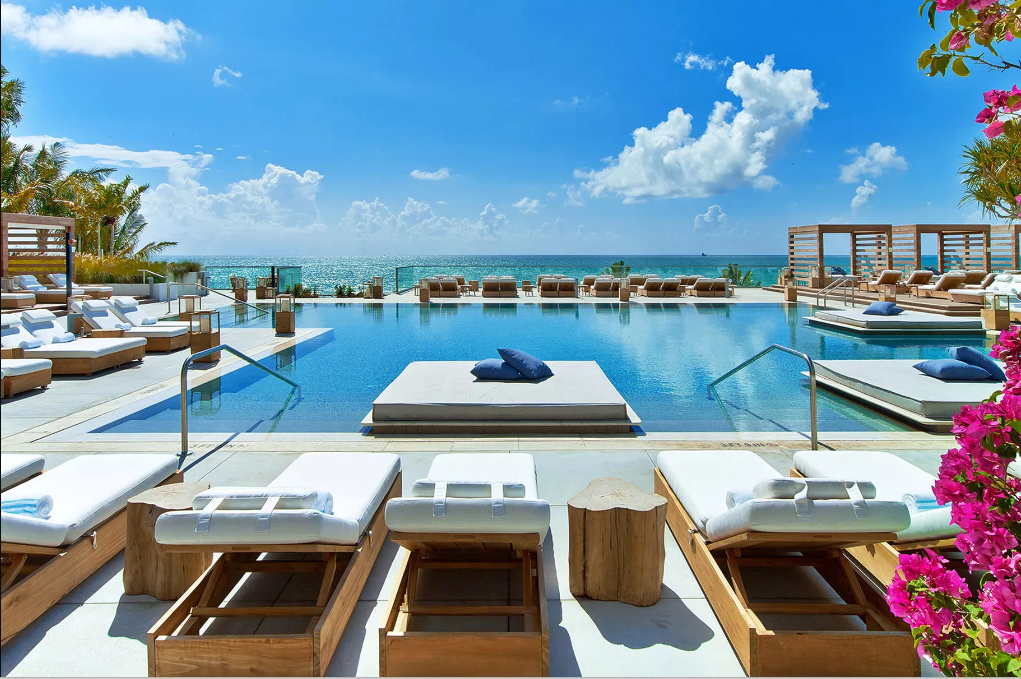 Rooftop pools with stunning skyline views aren’t anything novel. Neither are pools with sweeping views of the shoreline. But both at once? The hotel atop South Beach’s 1 Hotel has perfect vistas of the Miami skyline to the west and the Atlantic Ocean to the east, plus a full bar and the occasional pool party, drawing some of the world’s biggest “stars” of Instagram.

It is quite possibly the most famous hotel pool in the word, set 57 stories above glittering Singapore with an unobstructed view of the skyline in the distance. It’s the largest rooftop infinity pool in the world, and though we’re not telling you anything new by including it in a roundup of the world’s best, no list is complete without it. 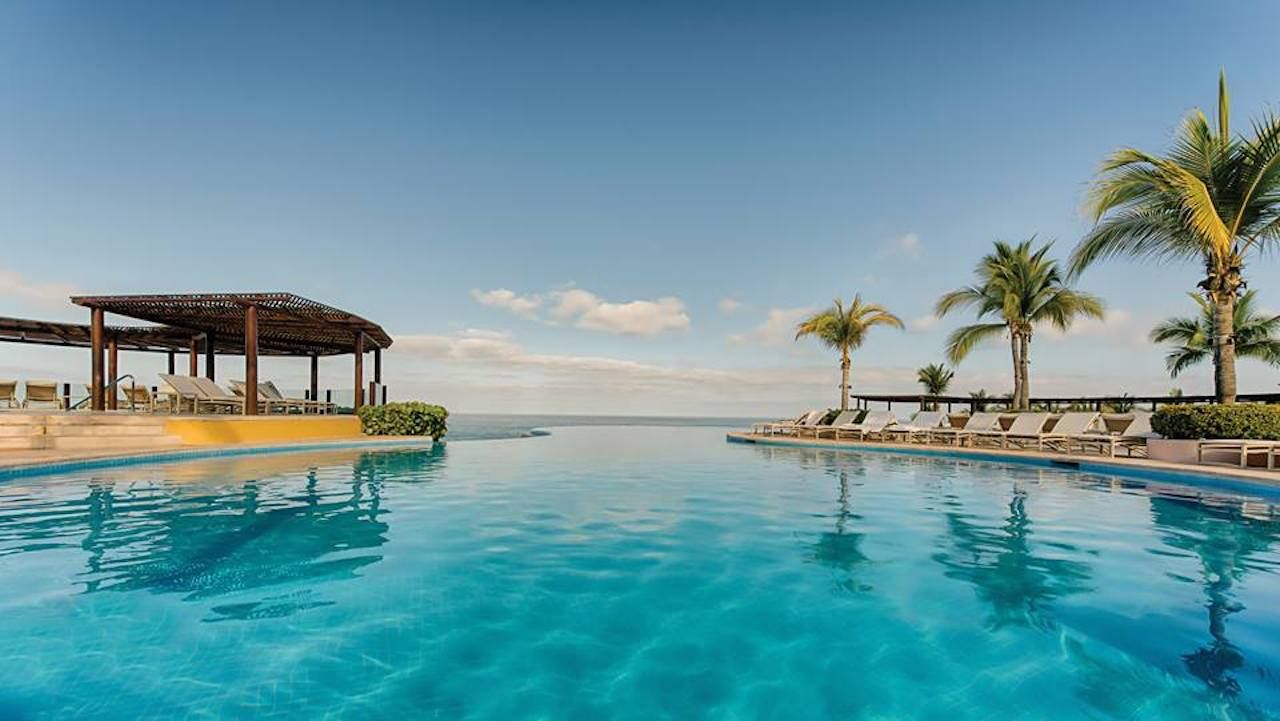 The charming little coves of Mexico’s Riviera Nayarit make for some of the coolest hidden surfing beaches in the world, but the massive cove that envelops the Four Seasons makes for the best hotel-pool view. The semi-circular pool deck feels like an amphitheater looking out onto waves crashing against rocks and cliffs in the distance. While Mexico has no shortage of spectacular hotel pools, this one might be the best. 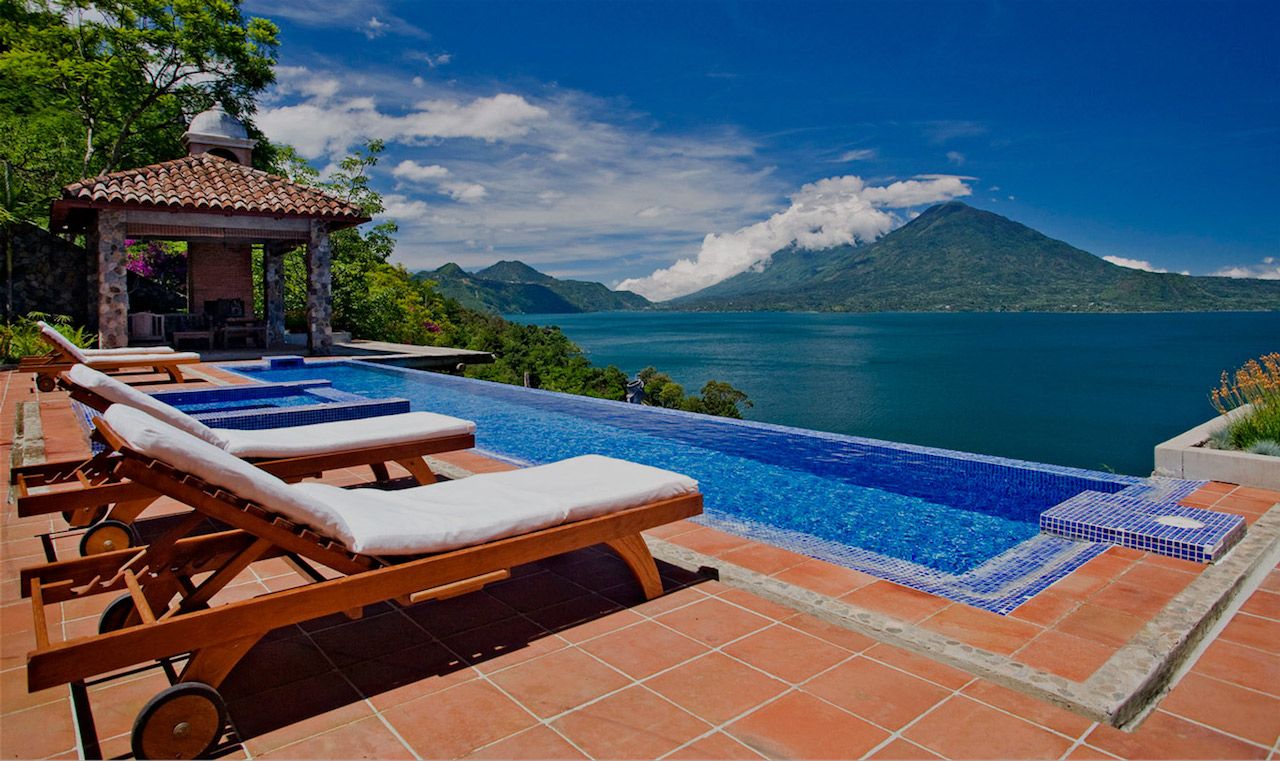 You don’t need to be a luxury mega-resort to have a swimming pool with a world-class view. Case in point is this little boutique spot nestled up in the mountains around Lake Atitlan. The infinity pool at the 15-guest resort sits over the water like one might at a villa on Lake Como, at a fraction of the price. So if you find yourself in Central America, make a point to take a refreshing dip here. 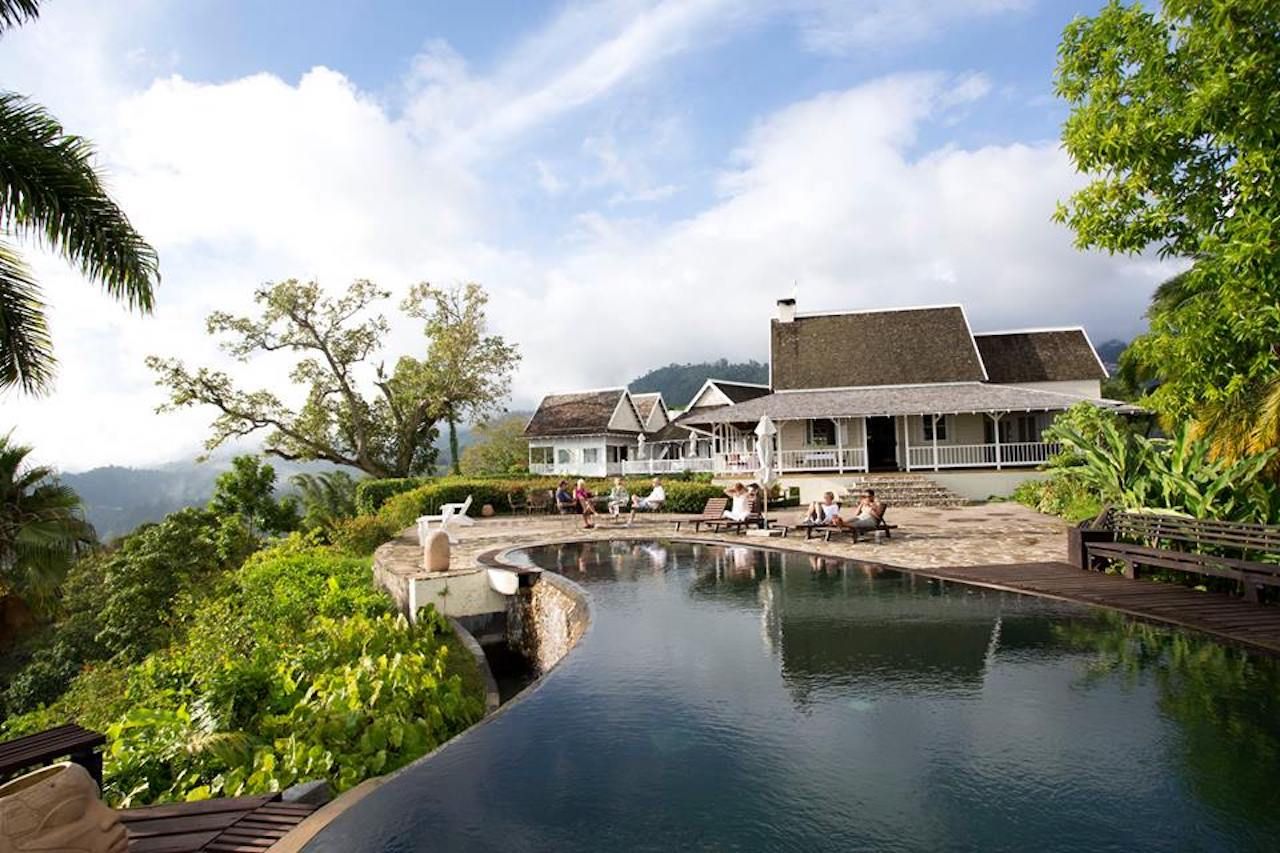 In a country full of never-leave-the-resort all-inclusive hotels, battling for the hotel pool view that’ll keep guests planted is tough. But this 12-cottage hotel set in the Blue Mountains hits all the Jamaican high notes. In the foreground, you have the staggering Blue Mountains, home to some of the best coffee in the world. Beyond that is the bustling capital of Kingston, and far in the distance, you can see the Caribbean Sea. It’s much more interesting than a simple beachfront view you’ll get elsewhere. 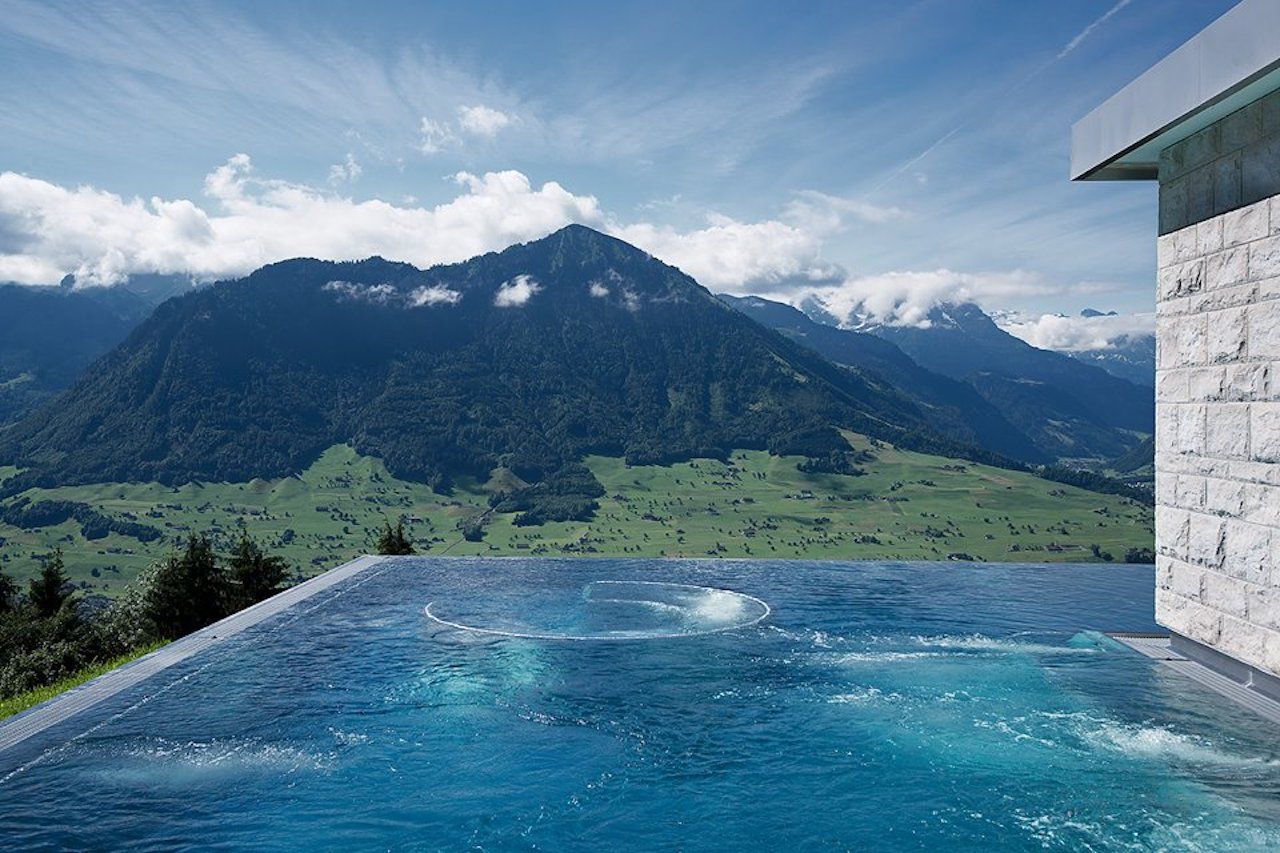 Switzerland has plenty of hotel infinity pools with front row seats to the Alps, but what sets this 23-room boutique hotel apart is its setting right above Lake Lucerne. On a mild day, you’ll get the scenery trifecta of snow-capped mountains, a shiny lake, and white fluffy clouds, which is probably why the hotel dubbed its pool the “Stairway to Heaven”.

The tranquil island of Nevis is known for its abundance of plantation homes turned luxury hotels. But the only one with a beach is Nisbet, where the pool set along the shore has views of the mountainous island on both sides, the Caribbean to the front, and Nevis Peak to the rear. Add in a beach bar open to the public and a whole lot of hammocks, and you’ve got the most underrated hotel pool in the Caribbean. 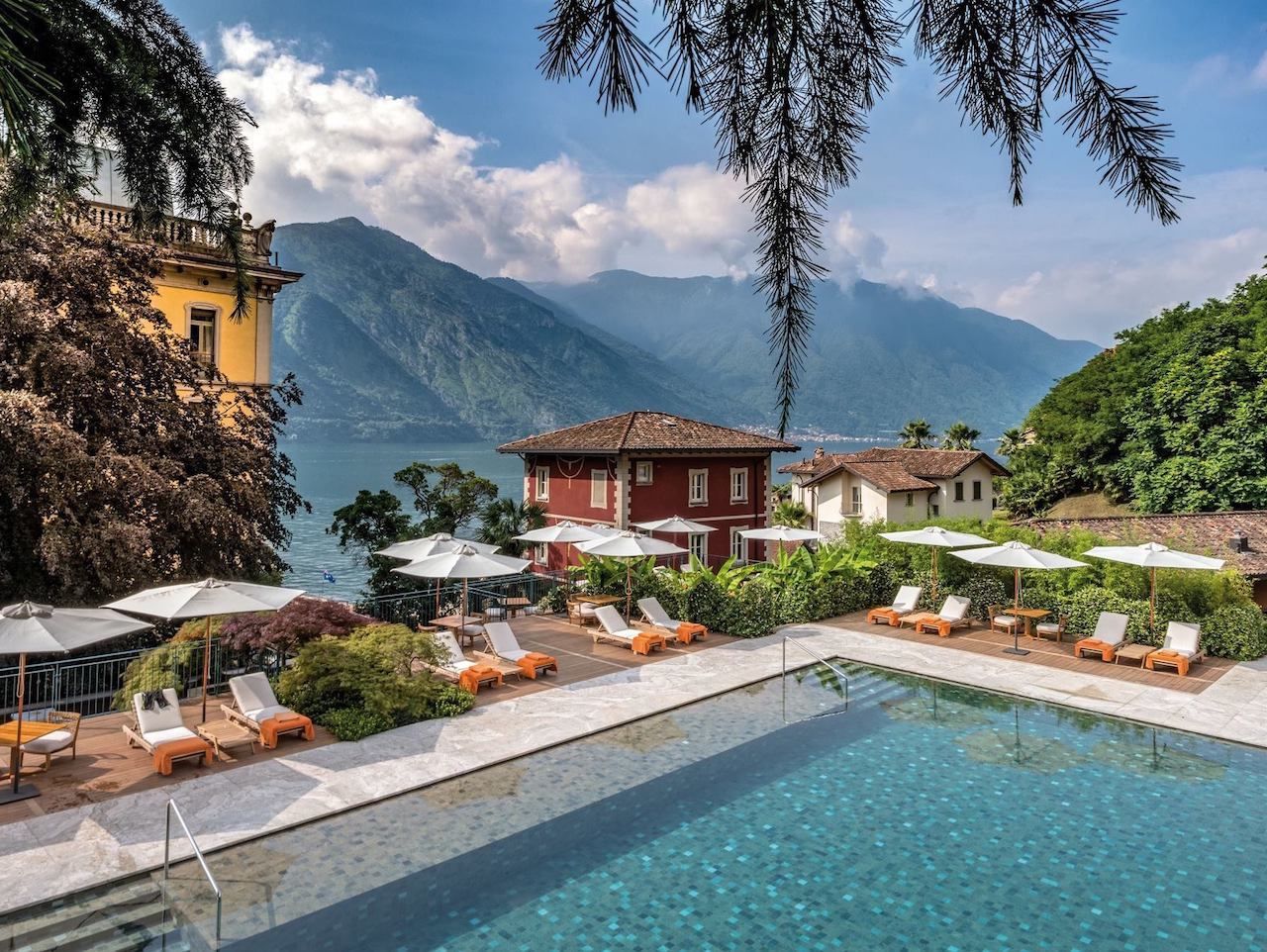 Somehow one of the most famous hotel pools in the world doesn’t exactly blend with the Mediterranean villas that surround Lake Como. It looks a little like the deck of a cruise ship jutting out into the lake, but the view here is still unparalleled. When you relax on a chair and look out at the deep blue water and sheer peaks beyond, the architectural aesthetic somehow doesn’t seem so important. 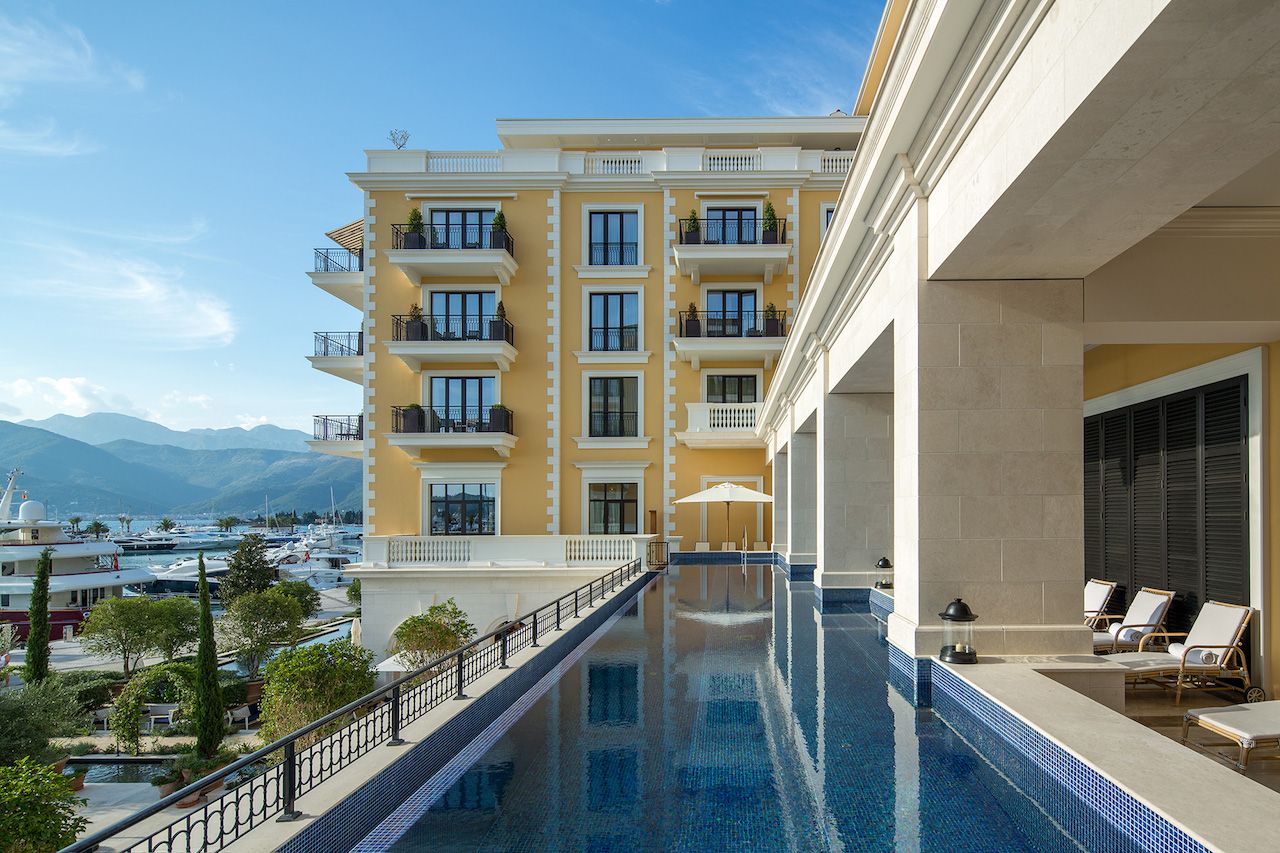 This little country on the Adriatic has started flying considerably above the radar the past couple of years, thanks mostly to the fact that it houses the largest natural harbor in the eastern Mediterranean. The best way to take in the whole thing is from this 65-foot pool deck, where you’ll look out onto sailboats cruising in the water and the mountains close by. It feels a little like a more-accessible Monaco with stunning seascapes set beyond modern buildings. Montenegro may be a hidden gem no more, but it’s still a must-visit. 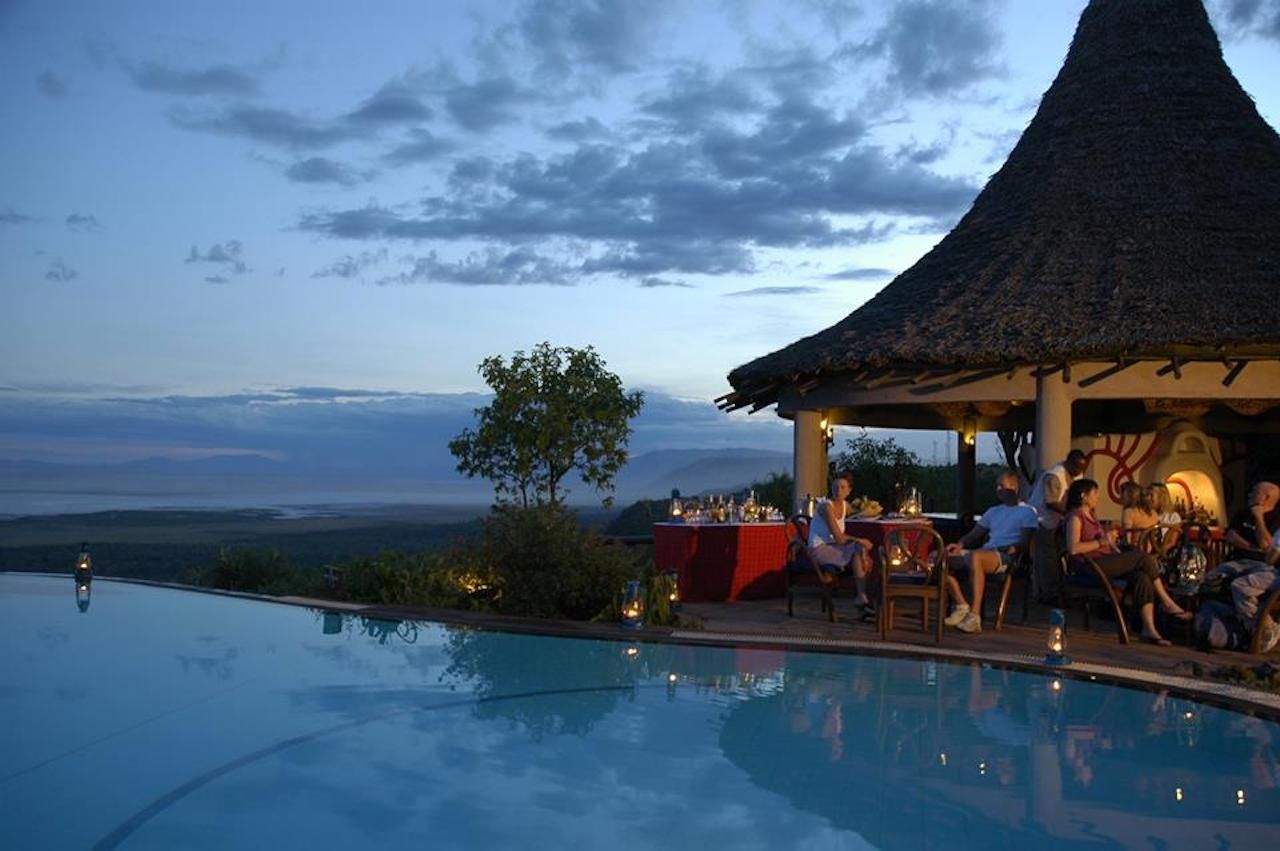 The thundering herds of elephants and sprawling African savanna make for some seriously envy-inducing Instagram posts. But why not double up on the social-media superstardom and post pics from a serene, vanishing-horizon pool with front-row seats to one of the most scenic lakes on the continent? This lodge in Lake Manyara National Park lets you do both; after game drives and bird walks you can relax by the pool, which is only a few steps away from every room in the lodge. 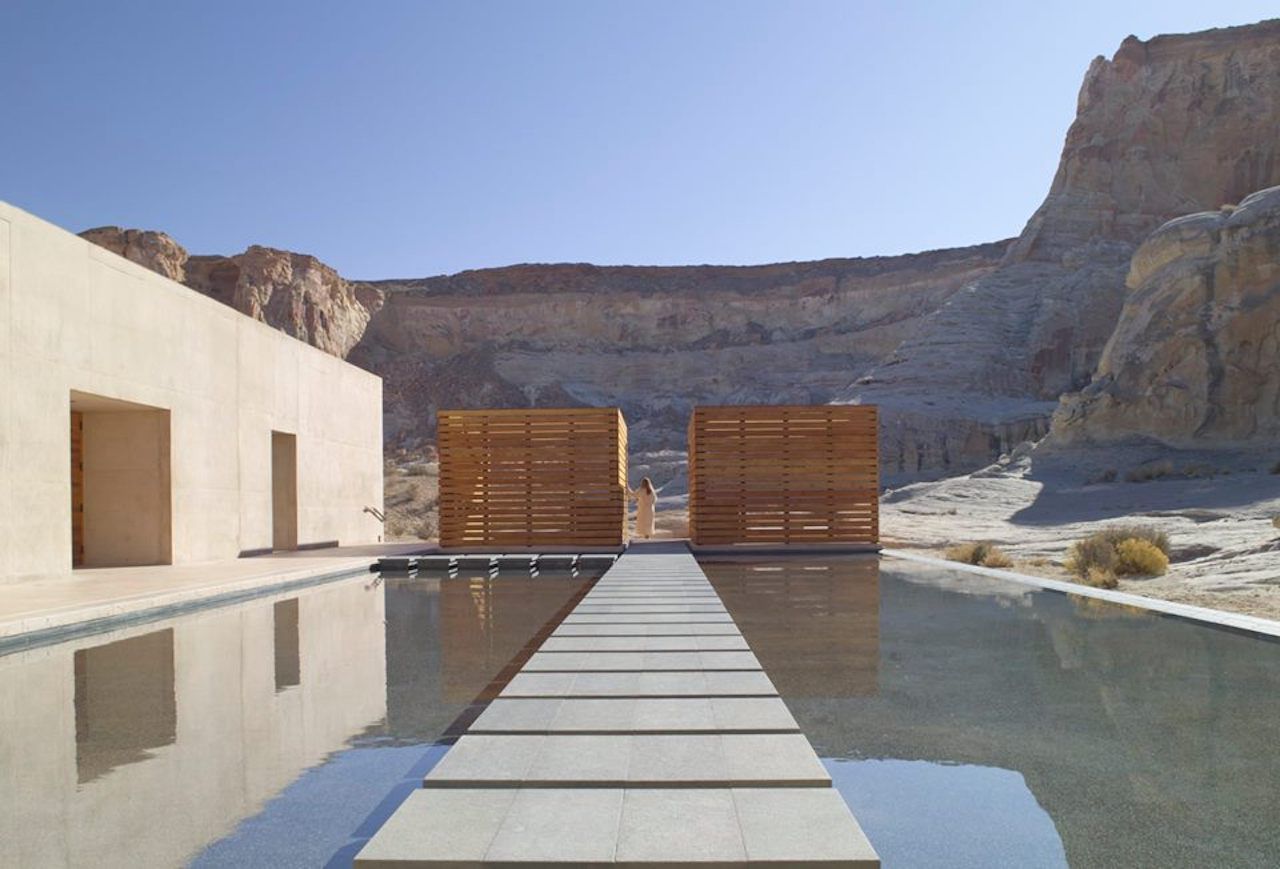 Sitting by the pool at this luxury hotel in the American west makes you feel like you’re getting a tan in the middle of the great wide open. Set at the base of jagged red rocks, the Amangiri pool gives you a pretty solid simulation of swimming in the Colorado River in the middle of the Grand Canyon. Though that landmark is nowhere near here, the hotel recreates the feeling of being small under the height of the desert rocks. 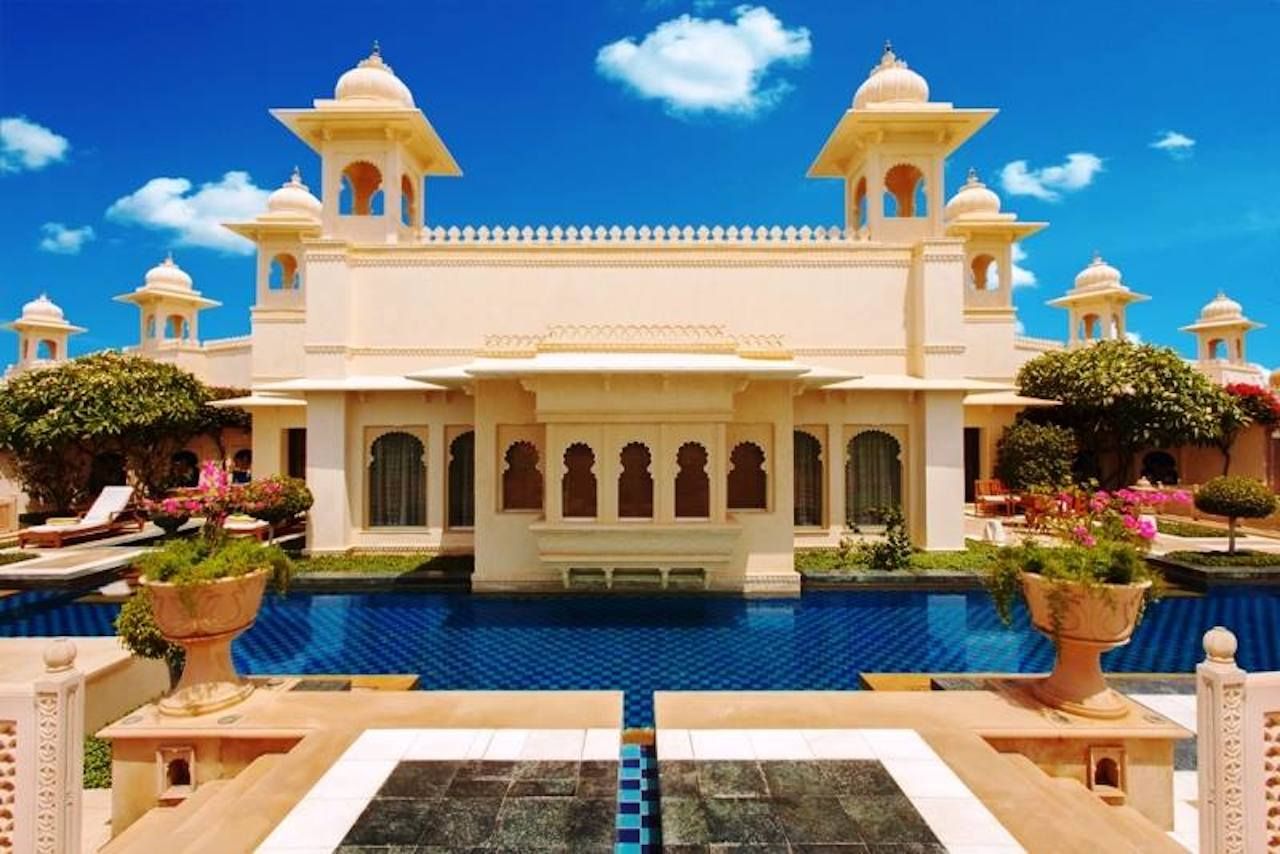 This ultra-luxe spot on the shores of Lake Pichola feels a little like staying at the Taj Mahal, with its interconnected domes and 50 acres of impeccably landscaped property. The Taj-like atmosphere continues at the pool, which stretches alongside the golden palace out over pristine gardens with views of the lake beyond. 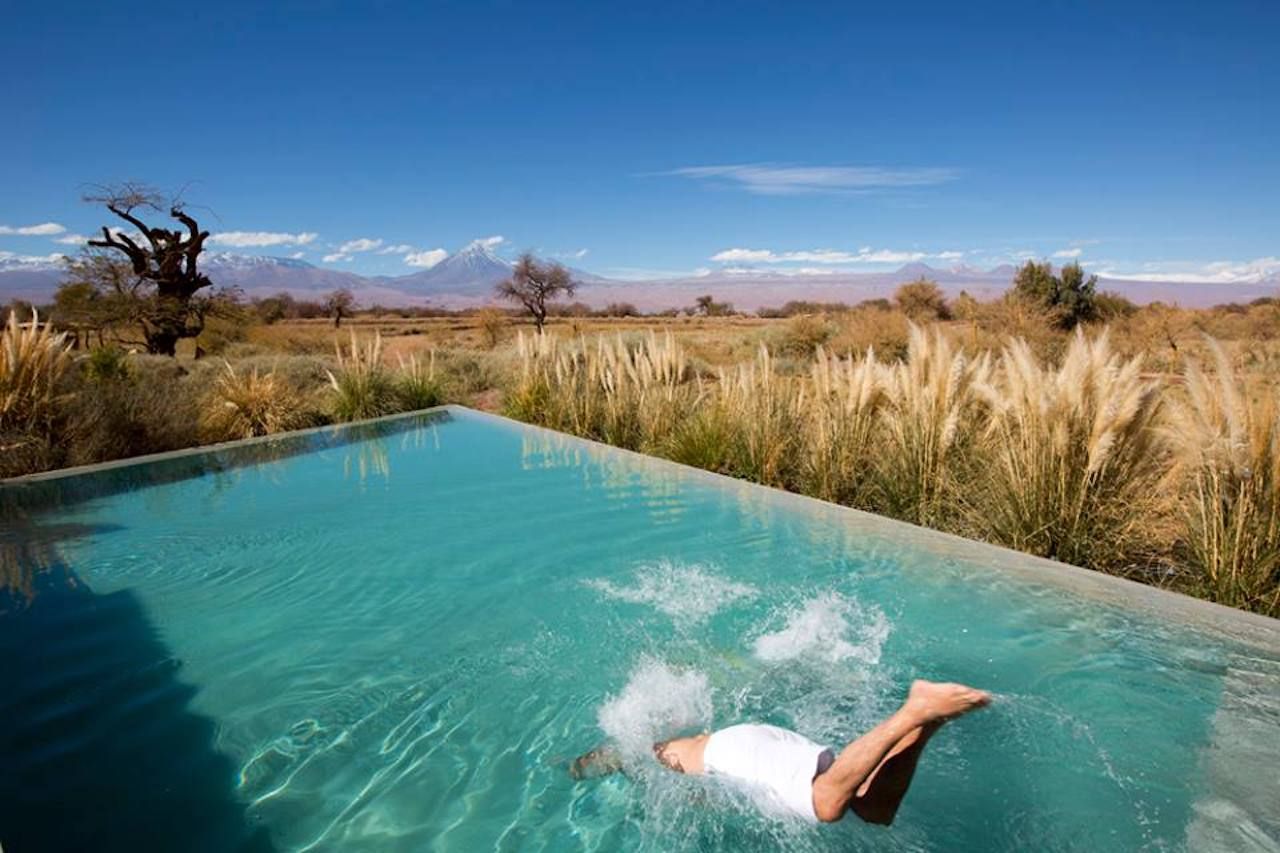 The Atacama Desert might be the most underrated natural feature in Chile, a stark expanse of desert plateau set along the Pacific Ocean. It’s not teeming with luxury accommodations, but the pool at the Tierra Atacama has views of the rugged plateau into the mountains beyond. It’s the kind of pool that has a true sense of place, and while enjoying the view from one of its curved wicker chairs, you’ll know you couldn’t be anywhere else in the world.

Where to StayThe 11 dreamiest swimming pools in the world you can visit this summer
Tagged
Where to Stay
What did you think of this story?
Meh
Good
Awesome