“Buon appetito,” the server said as he set a steaming dish of tagliatelle ai porcini, in English, tagliatelle with porcini mushrooms, atop the flowered tablecloth in front of me.

“Grazie,” I said, reaching for a metal dish of Parmesan cheese. The waiter’s pleased expression morphed into one of alarm.

“Signorina, non si puo!” he exclaimed, or “Miss, you can’t do that!” He seemed to break into a light sweat.

Baffled, but not wanting to further torture the server, I relinquished the Parmesan cheese and focused on my glass of bubbly Pignoletto. The server let out a sigh of relief and scurried away.

My table mate leaned over her plate of tagliatelle al ragù. “Do you think I can add olive oil to this?” She asked in a hushed voice.

I would later learn my friend had asked a legitimate question about her ragù: Italians believe it’s already rich and oily enough, and therefore, additional oil isn’t necessary. Many Italians also think cheese ruins the delicate flavor of mushrooms, like porcini.

After several years living in a medium-sized town called Faenza, I have learned to respect Italian food customs even if they don’t always make sense to me. Once, while preparing a simple dinner of penne pasta with tomato and Parmesan cheese with my Italian boyfriend, I mentioned I wanted to add black pepper and oregano, but my boyfriend shook his head.

“We should choose either pepper or oregano,” he said.

“Have you ever added them both?” I asked. It had never even occurred to American me not to.

“I would like to savor one or the other,” he replied.

In Italy, each element is much more significant than a simple ingredient in a pantry. There are only two other things I’ve heard regularly referred to as a religion in this country (besides Catholicism): soccer and food.

I once witnessed a table of about 20 Italians enter into a heated debate about preparing ragù. We were in Bologna, the birthplace of this meaty sauce, and the group was talking about ingredients. An older woman with a cascade of white hair said she included carrots and celery, while a man from a nearby town stated he only added onions. Someone mentioned adding a bit of cream to the sauce, and the whole table erupted into a variety of reactions ranging from affirmation to shock.

It’s not easy to navigate the endearingly strict customs surrounding Italian cuisine, also because what is considered correct may vary by region or town (as in the case of ragù). However, to respect tradition, there are five food rules that Italians believe should always be observed at the dinner table. Here’s what you need to know.

Speaking of cream or milk, adding it to carbonara is an absolute no-no. Garlic and onions are also forbidden in this classic pasta dish. The only ingredients should be spaghetti noodles, pepper, Parmesan or pecorino cheese, egg, and pancetta.

Better even than pancetta, another diced meat called il guanciale di maiale, or simply guanciale. Why? Guanciale is fattier than pancetta, which makes the dish even more delicious. Guanciale is also tied to the region of Lazio, home to both Rome and carbonara. The carbonara closest to Italian tradition also uses pecorino cheese, since it also originates from Lazio. 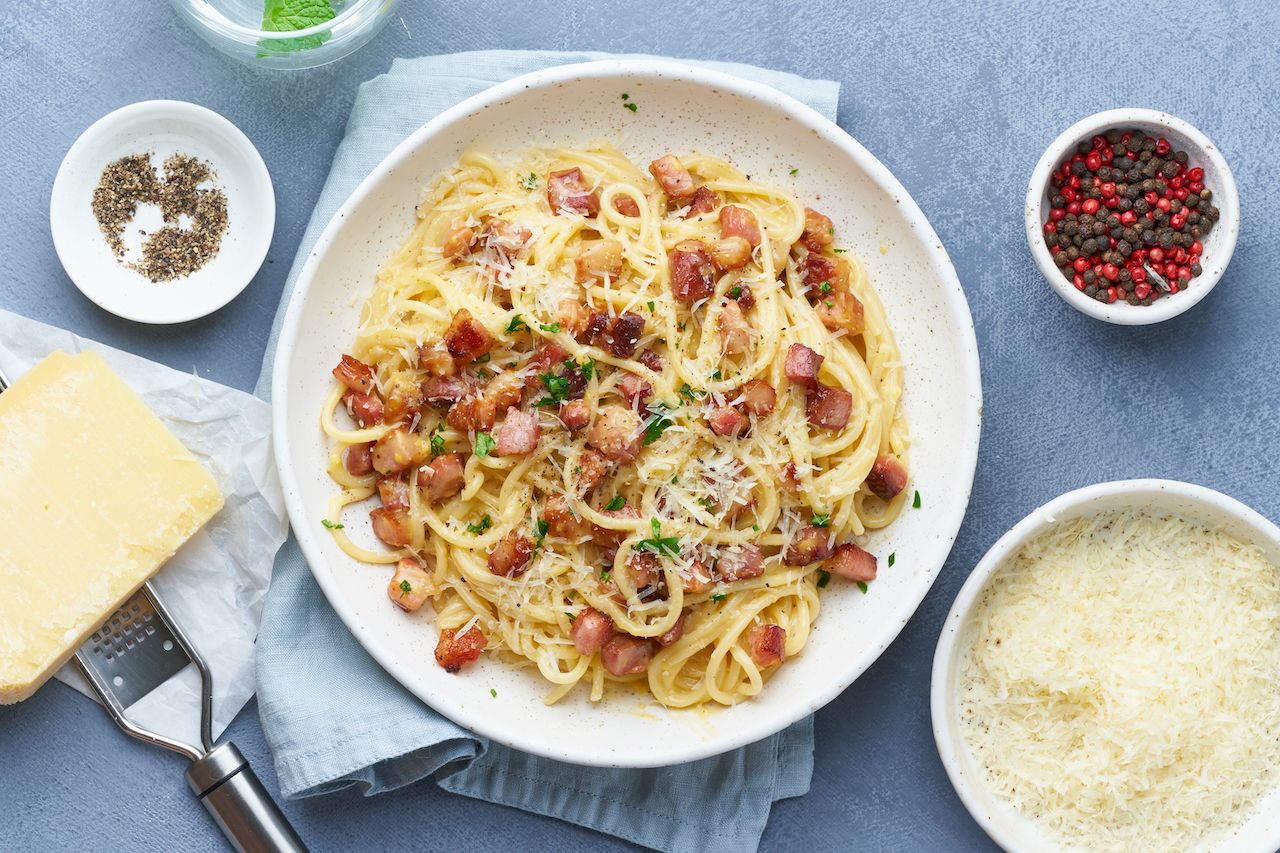 I discussed carbonara with an Italian friend and our favorite bartender, Luca. Both admitted they add a bit of cream to their carbonara when they make it at home. I was surprised.

Luca raised both his hands and shrugged, a typical Italian expression that means something like, “Oh well!”

“What can I say? In public we swear the recipe should be exactly so and in private, we do what we want,” he said.

2. Fish and cheese shouldn’t be served together

The majority of Italians swear that cheese shouldn’t touch a fish or seafood dish. Sprinkling Parmesan cheese atop, for example, spaghetti with clams or roasted bass, is discouraged. Some even insist that secondi, or second courses (typically meat and fish), should not be accompanied by contorni (side dishes) that include cheese (like Caesar salad). This food rule stems from respect for the fish or seafood, whose delicate taste will be overpowered by the stronger flavor of the cheese.

3. Each course should be served separately

Italians take great pleasure in long, drawn-out meals where each dish has its proper time in the spotlight. The primo, or first course, showcases foods like pasta, risotto and soup, followed by the aforementioned secondo and contorno, dolce (dessert), coffee, and digestive liquors. The only two items allowed to grace the table simultaneously are the secondo and contorno.

In Italy, side salads are also considered contorno. In recent years, and especially in touristy places, the staff has become used to visitors who prefer eating salads first or even request that all the food arrives at once. However, in order to dine like an Italian, the courses should be separate, and salad should be nibbled later to help digestion.

Eating multiple foods off the same plate may also raise either alarm or confusion among Italians. Even at buffet-style breakfasts, which serve more “American” items like eggs and pancakes, Italians make several trips in order to keep sweet and savory foods apart.

4. Spaghetti and meatballs don’t go together 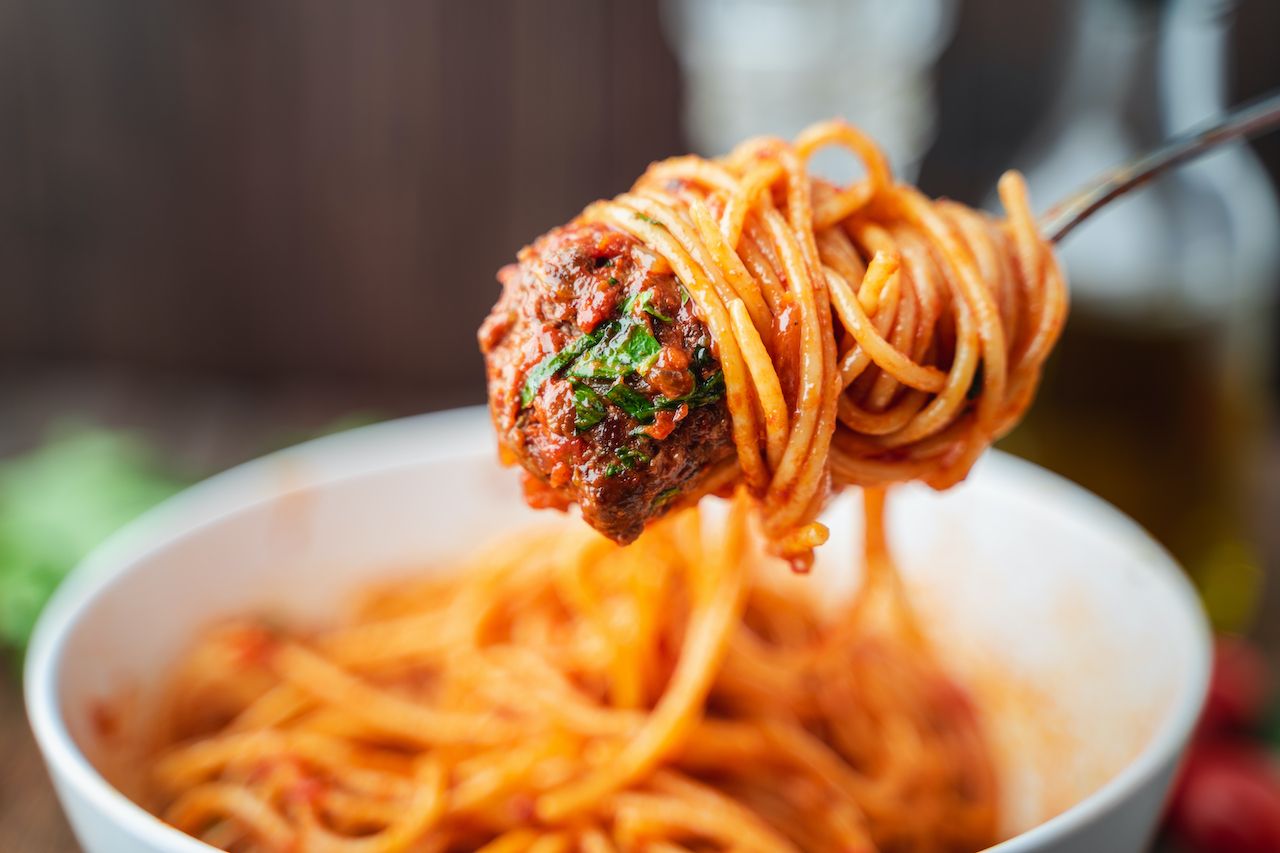 Dishes like spaghetti and meatballs not only don’t exist in Italy, but they don’t make logical sense to an Italian. Spaghetti is served during the primo (first course) topped with clams or tossed in carbonara sauce; meatballs, called polpette and composed of meats or vegetables, are reserved for the second course.

It is also not common to eat bread with pasta. After the pasta is finished, bread is used to “fare la scarpetta,” literally translated as “do the shoe.” In other words, the bread is used to scoop up every last bit of delectable sauce before moving onto the second course.

5. Coffee should be timed perfectly (and avoid cappuccinos after a certain hour)

Among the most ubiquitous elements of Italian cuisine is the cappuccino. But this seemingly simple caffeinated beverage is anything but, and there’s a certain way to order coffee in Italy and not look like a tourist.

When it comes to cappuccinos, don’t order one at the end of a multi-course dinner. Or while still finishing a lambchop or even penne all’arrabbiata. Coffee should be ordered after the meal’s final course.

The point of coffee at that juncture is, like salad, to encourage digestion, which explains why cappuccinos are considered “too heavy” for this service, with their layer of frothed milk. Thus, a caffè normale (or simple shot of espresso) is the best choice. If straight espresso is too strong, order a caffè macchiato which will arrive with a dollop of steamed milk on top.

Cappuccinos also come in just one size; there is no such thing in Italy as a small, medium or large cappuccino.

Food + DrinkThere Are Two Types of Italian Coffee Drinkers. Which One Are You?
Tagged
Food + Drink Italy
What did you think of this story?
Meh
Good
Awesome