One of the most authentic food experiences you can have in Italy is to visit a food festival or sagra. Not only do they epitomize the Italians’ dedication to their gastronomic culture, but they also exemplify the way Italians approach the ritual of eating. Eating is an event, a social occasion, and a moment to enjoy life that definitely shouldn’t be rushed. Food festivals are like one big Italian dinner, with a few historic parades, dancing, and music is thrown in for good measure. Here are seven food festivals you definitely need to attend — just be sure to pack your stretchy pants. 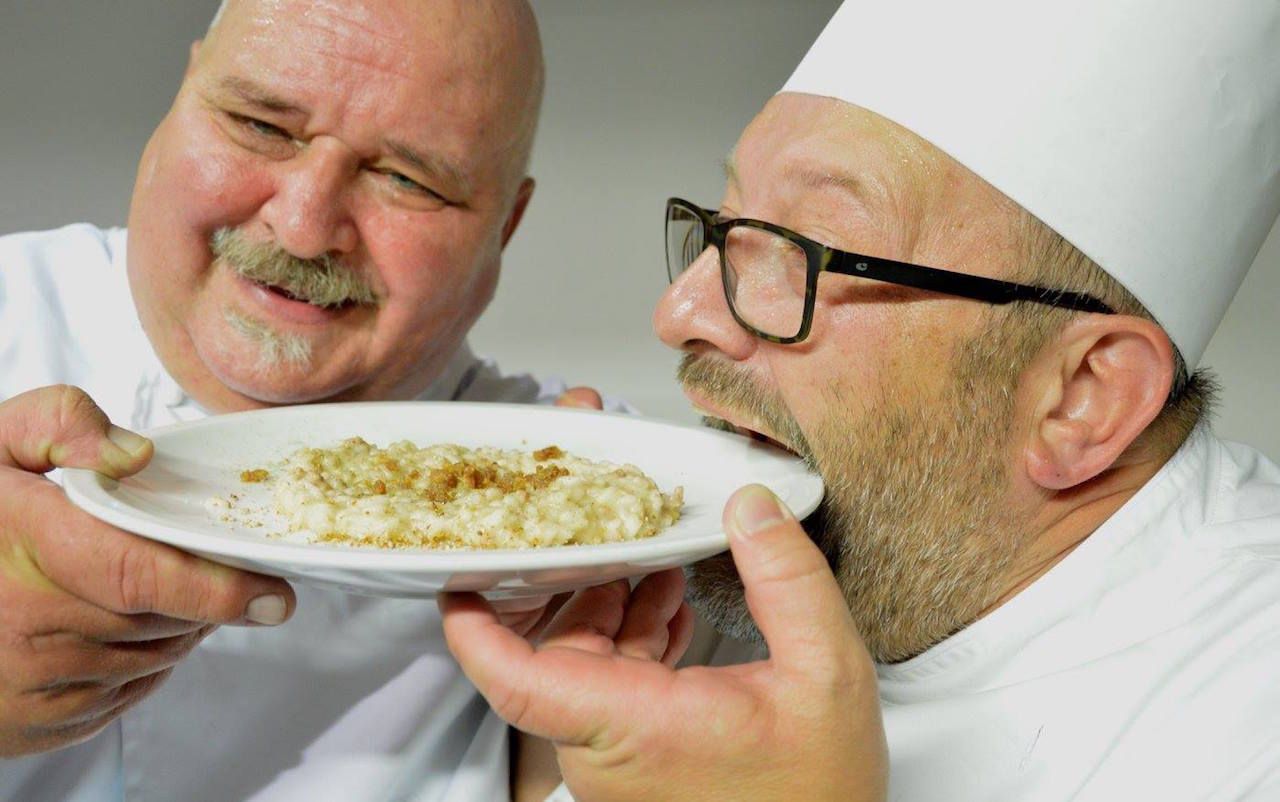 Isola della Scala, near Verona, is already home to renowned restaurants that serve only risotto or rice-based products (including rice grappa), so it’s not surprising that it also hosts the biggest rice and risotto festival in Italy, Fiera del Riso. Large tents are set up, where you can sit down to a meal of all kinds of rice dishes, from curried black rice to taleggio cheese and pear risotto. You can even buy the different varieties of rice milled in the area. There are also historic parades and events dedicated to showcasing the rice farming process. 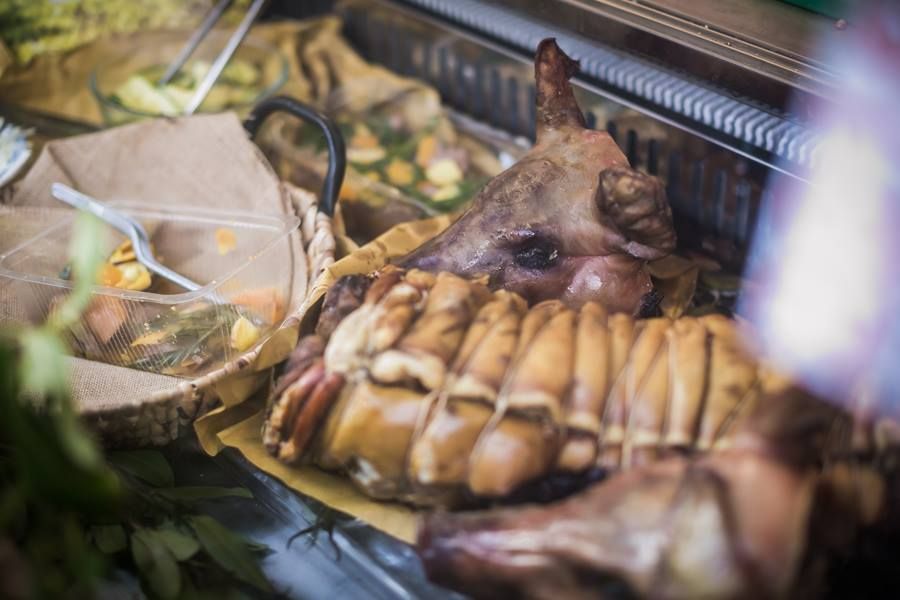 Porchetta is the queen of Italian street food. Originating in the Lazio town of Ariccia, porchetta is succulent, slow-roasted pork that’s been stuffed with rosemary and seasoning. It’s sliced thickly and laden generously between doorsteps of bread, and now it has its own festival. The best porchetta producers gather in this Umbrian town in May for a three day pig-out. There are workshops, tasting tours, music, and fantastic pig-themed merchandise. 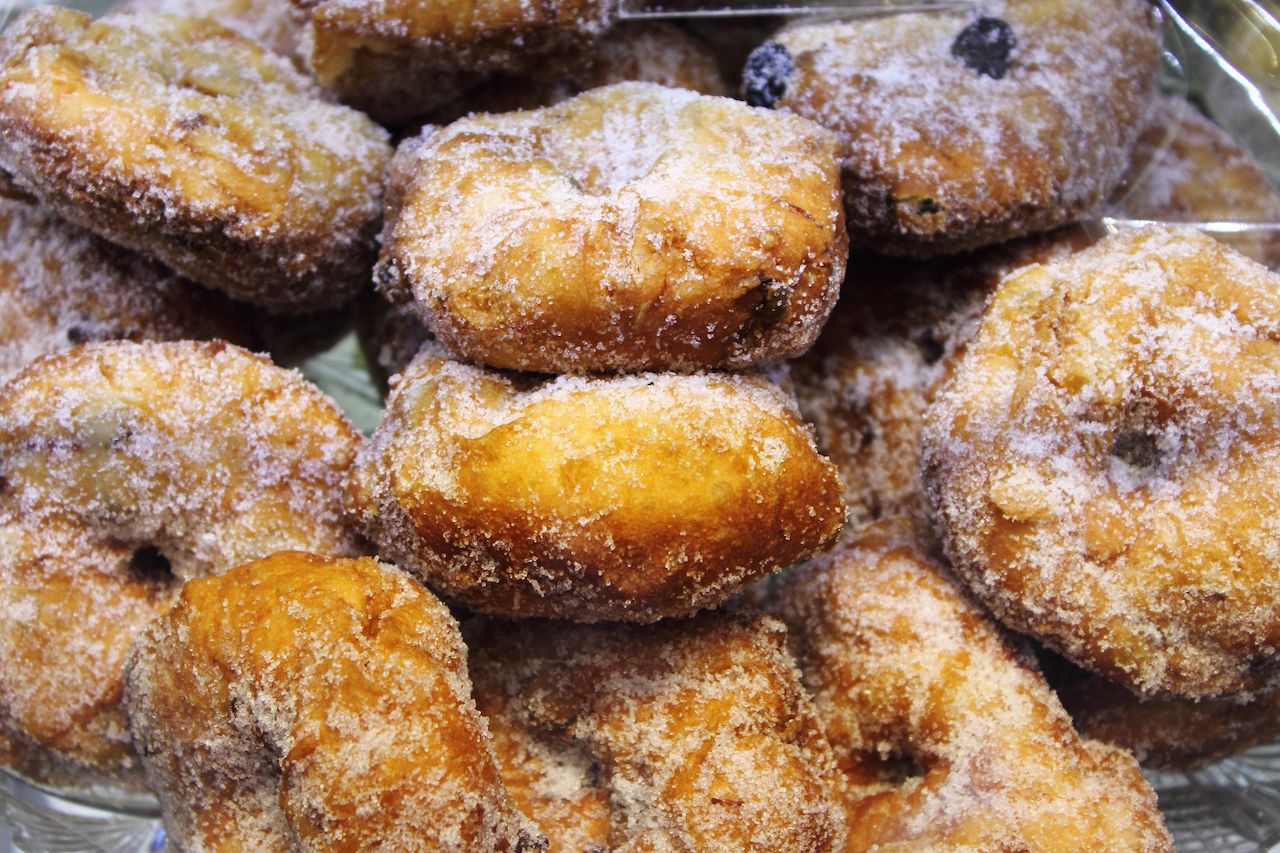 Although more immediately associated with masks and lavishly decorated costumes, Venice Carnival, and the concept of carnival in general, is intrinsically linked to food. The term carnevale, in Italian, derives from the Latin carnem levare, meaning to eliminate meat. Carnival, therefore, came about as the last chance to indulge in culinary (and other) luxuries before the beginning of Lent, a period of sobriety and abstinence. As such, during Carnival dessert production throughout Italy booms. The Venetians churn out tray-loads of crostoli, which are made from an alcohol-spiked dough that’s thinly rolled and deep fried, and then laden with icing sugar. You can also find deep-fried balls of dough with sultanas and deep-fried custard.

4. Battle of the Oranges — Ivrea 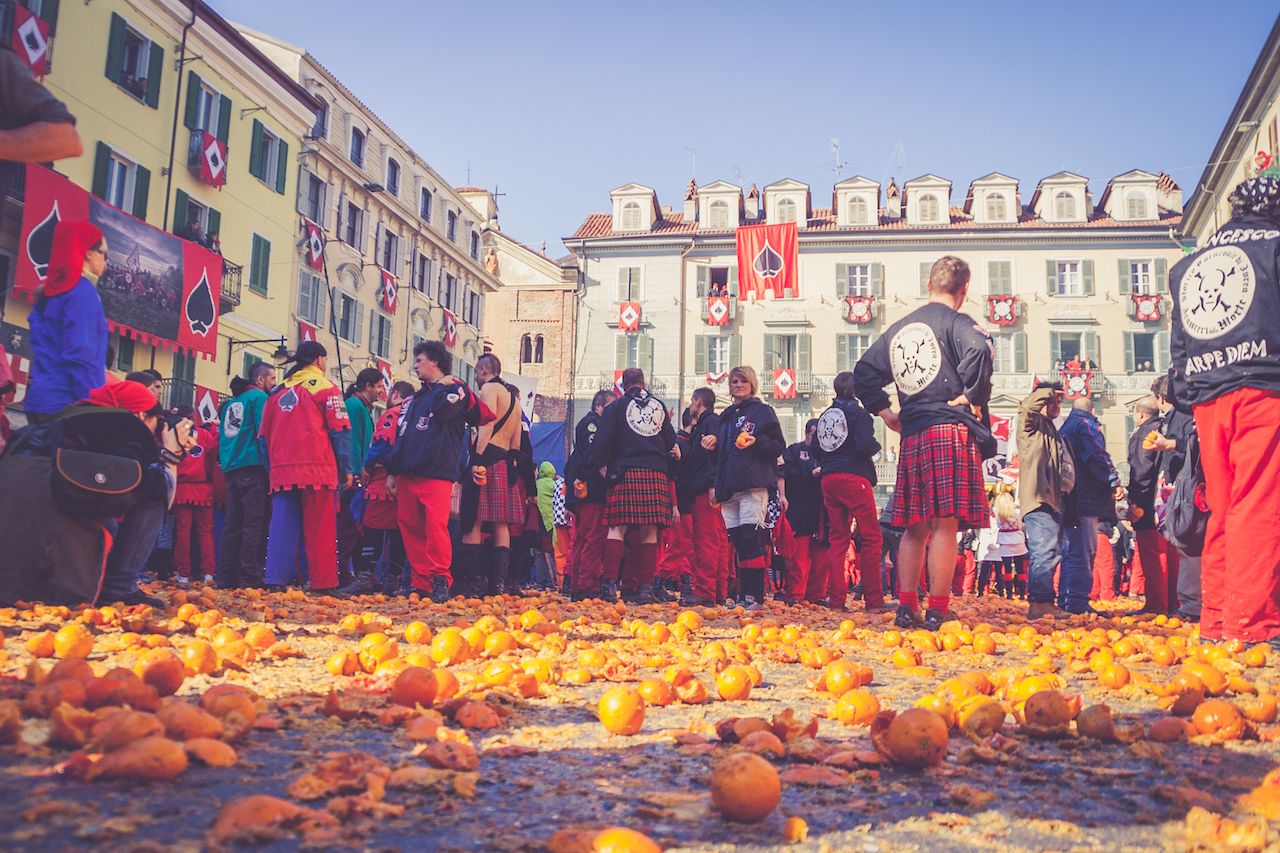 It’s a festival about food, but not about eating. It’s actually Italy’s greatest food fight and it’s violent, messy, and outrageously fun. For three days in February, a battle using oranges as ammunition rages throughout the town’s streets and squares. It commemorates the uprising of the people against their medieval tyrant and ‘soldiers’ on horse-drawn carriages are pitted against ‘rebels’ on the ground. While the oranges might not be intended for eating, there’s no shortage of typical foods on offer, particularly the early morning stew of beans and various parts of a pig to help pep up your strength before the battle.

Autumn sees a host of wine festivals or cantine aperte (“open cellars”) where you can taste the produce, but there’s only one where the town’s fountain flows with free wine, not water. A true bacchanalian celebration, Marino’s Sagra dell’Uva features grape vines strung across the streets, bunches of grapes adorning statues, and a historical reenactment of the 1571 Battle of Lepanto. On the Sunday, usually the first Sunday of October, the Festa della Madonna del SS. Rosario is celebrated, and it’s thanks to her miracle that the town’s central fountain generously flows forth with free wine for the townsfolk. Long plastic tubes run from the fountain, which staff use to fill up cups and plastic bottles.

Unfortunately associated outside of Italy with its crude imitation, baloney, mortadella is one of Bologna’s most loved products, and now has IGP protection ensuring that no artificial flavors, colors, or preservatives can be added. Stop by any bar in the city and your aperitivo bubbly will be accompanied by several delicate thin slices of mortadella on bread. Bologna’s Mortadella Festival, held in October, features street food stands where you can try the classic version or the many twists by inventive chefs. Taking place in the main square of the city, it’s a real celebration of Bolognese culture. 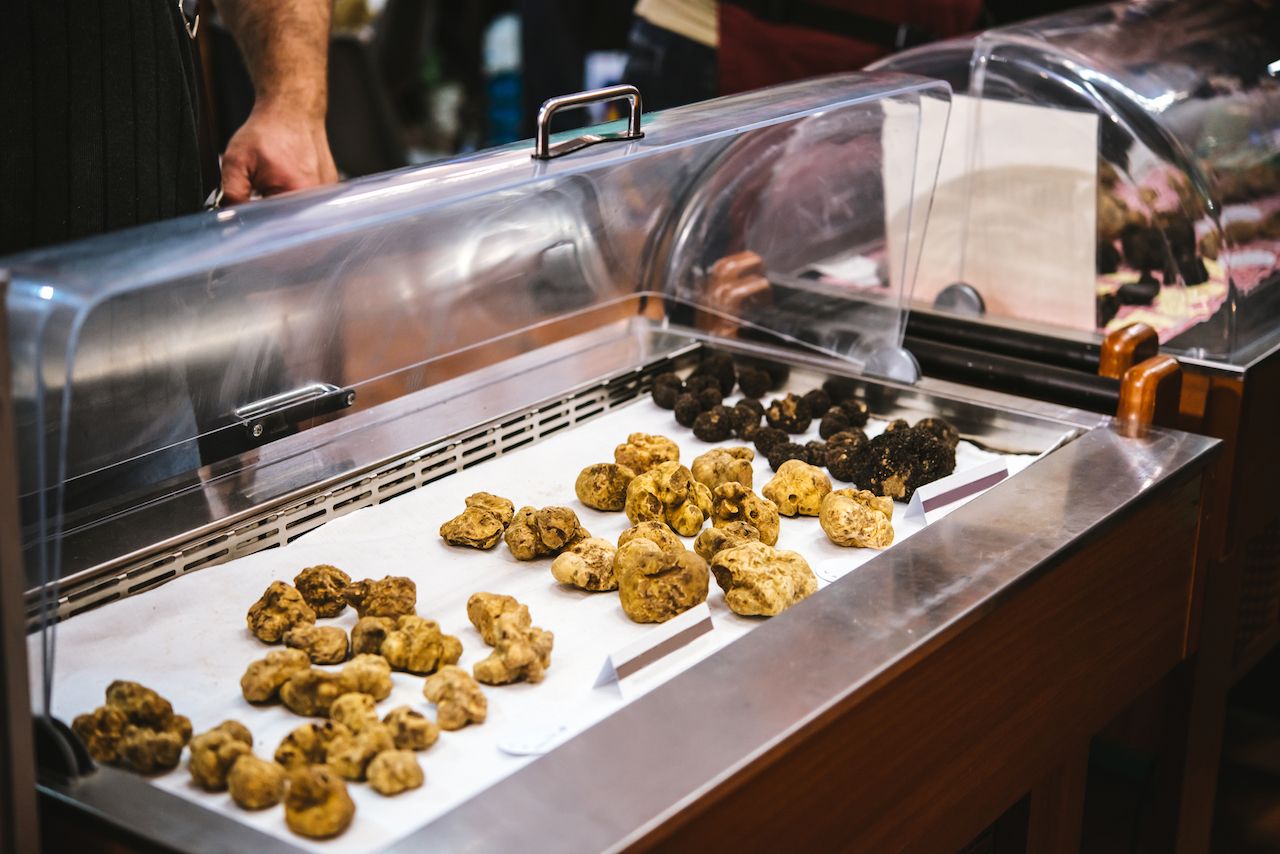 Instantly recognizable, pungent, and earthy, truffles transform risottos, pasta dishes, cheeses, and cured meats with just a few shavings. Alba, in the Piemonte region, is one of the most well-known areas for finding this prized fungus, particularly the white variety that ranks higher than the black. During the festival, the covered market in the historic center is an absolute assault on the senses where you can taste and buy pure truffles and a staggering array of related products. Just around the corner is the Alba Truffle Show. At its popular Foodies Moments, national and international chefs create truffle magic, with innovative food and drink pairings. Pop by the Wine Tasting Experience, too, to taste some of the high quality Barolo wine of the region.

Insider Guides17+ Spots That Prove Italy Is as Spectacular as You Think It Is
Tagged
Festivals Food + Drink Italy
What did you think of this story?
Meh
Good
Awesome