It’s easy to find hiking tips online, but it’s just as important to know what not to do when you hit the trails, too.

Whether you’re a first-time hiker or have been peakbaggin’ for years, some things are obvious — most people know not to go hiking in flip-flops or leave plastic food wrappers in the woods. But there’s a lot more to the culture of hiking that you might not know, and some hiking tips only focus on things you should do, not things you shouldn’t do. But knowledge is power, and the list of hiking tips before focuses on hiking taboos — things to never do, unless you want to be the least-popular person on the trail.

Sure, hiking tips are great, but hiking taboos are pretty important to know, too. 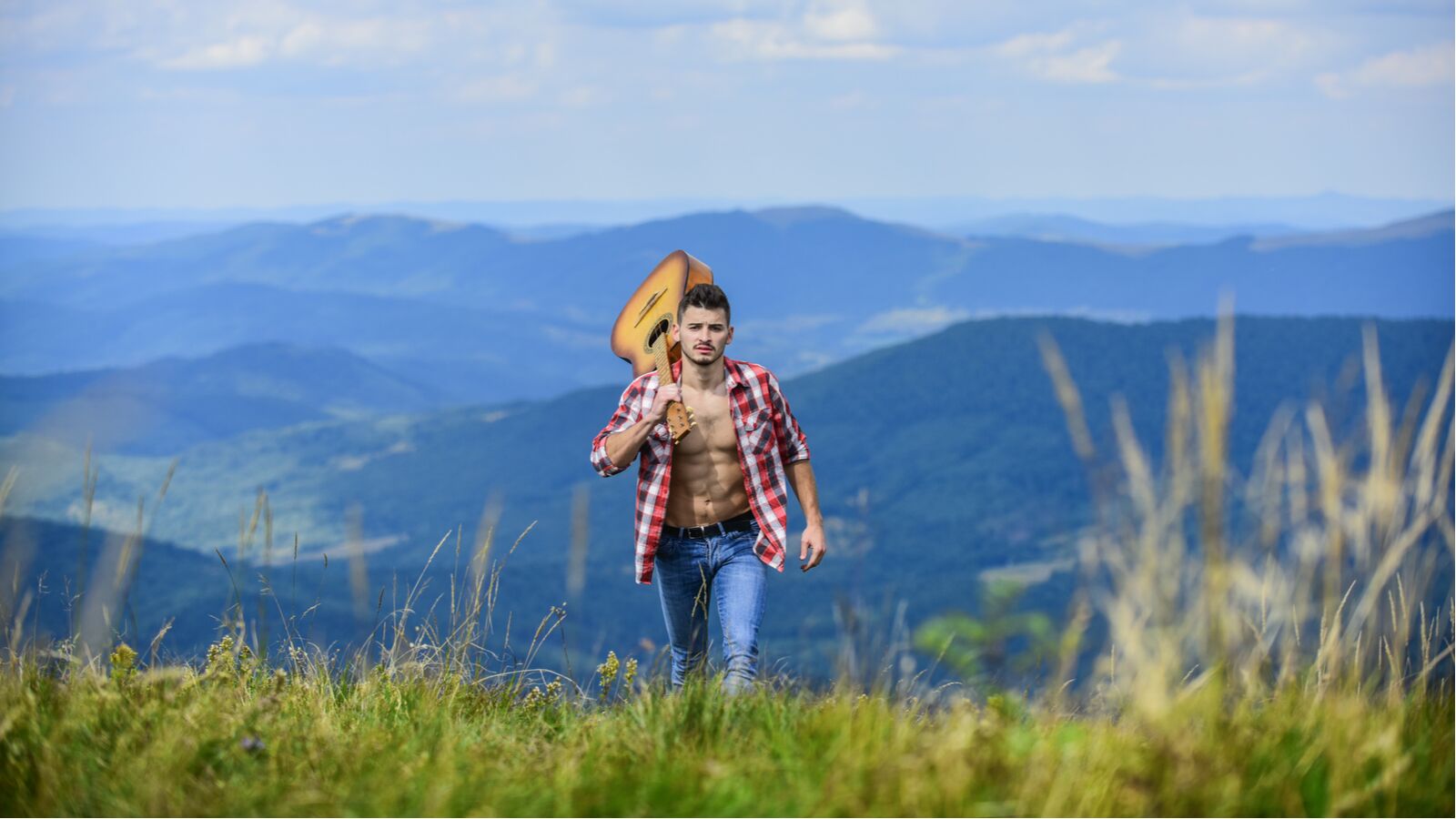 Seen here: some dude carrying his guitar back up a hill, presumably after another hiker threw it off the cliff out of sheer annoyance. Photo: Just dance/Shutterstock

I know this may be hard to hear, but bear with me: your music isn’t that good. And even if it was, your fellow hikers don’t want to listen to it. That goes for any music, even music that’s David-Bowie-Circa-Ziggy-Stardust levels of good. For many hikers, being outdoors is a chance to enjoy the sounds of nature or have a conversation with their trail partners. Blasting your music — which, by the way, sounds terrible to anyone not directly next to your speaker — is not only rude to everyone else on the trail but can scare animals and be disruptive to the environment.

If you want to listen to music (or, my favorite, a podcast), totally cool. Just wear headphones (but make sure you can still hear people and animals around you on the trail). Wearing one headphone and keeping the other ear free can be a good solution for listening to music while still ensuring you can hear people coming up behind you. 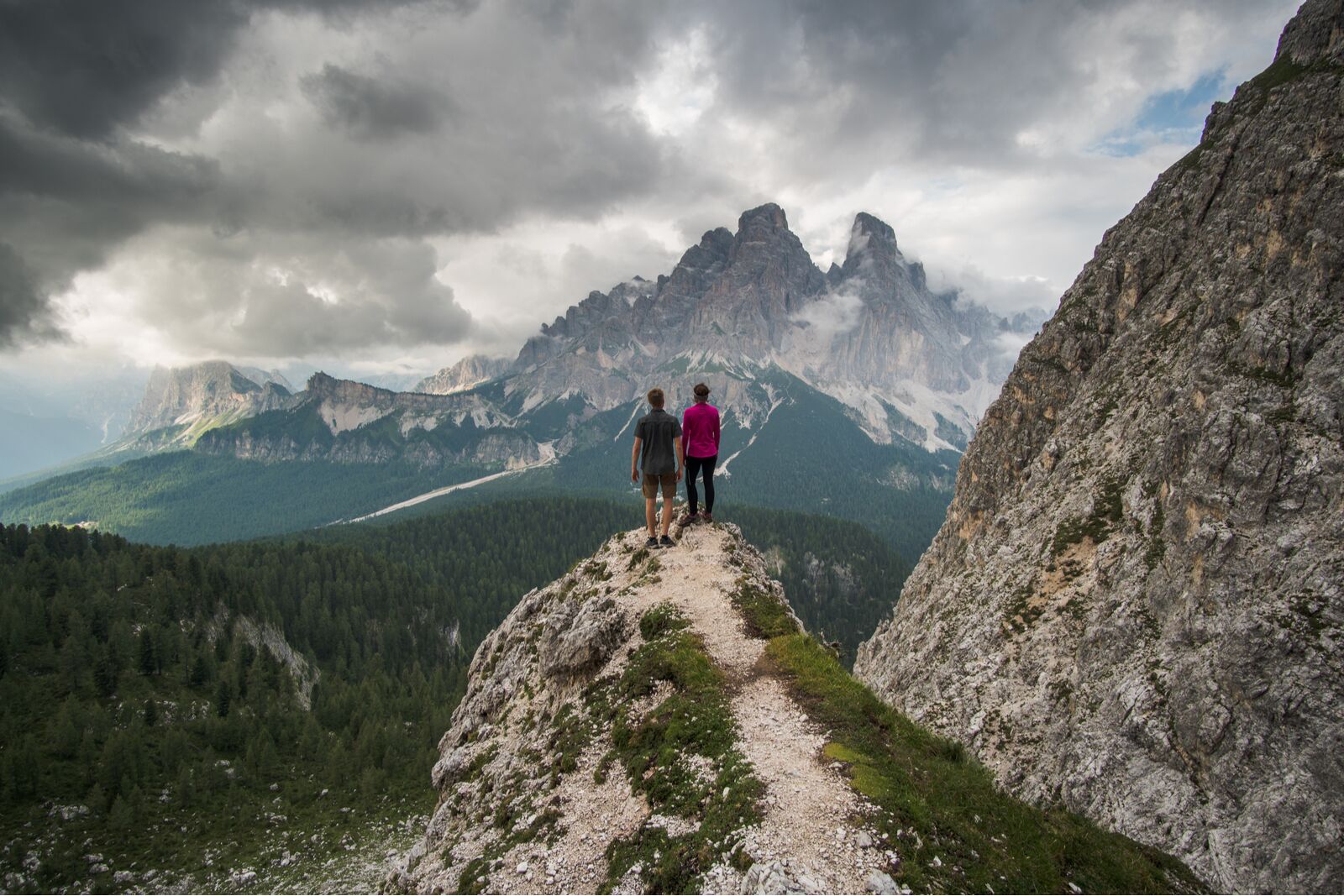 I really hope these two people know each other. Otherwise, awk-ward. Photo: Bkrzyzanek/Shutterstock

Just like you shouldn’t play music to ensure your fellow hikers can enjoy the outdoors, so too should you not invade their personal space. Sure, it’s inevitable on some trails — no one is expecting space to themselves if they decide to hike up Yosemite Falls on a Saturday afternoon. But for an average trail, it’s good to give everyone as much personal space as possible. What’s that look like in real life? Just be courteous: if a faster group comes up behind you, let them pass rather than trying to speed up. If you and another group appear to be moving at the same pace, consider taking a long break to let them move ahead, or speeding up for a while to create some distance.

3. Littering of any kind 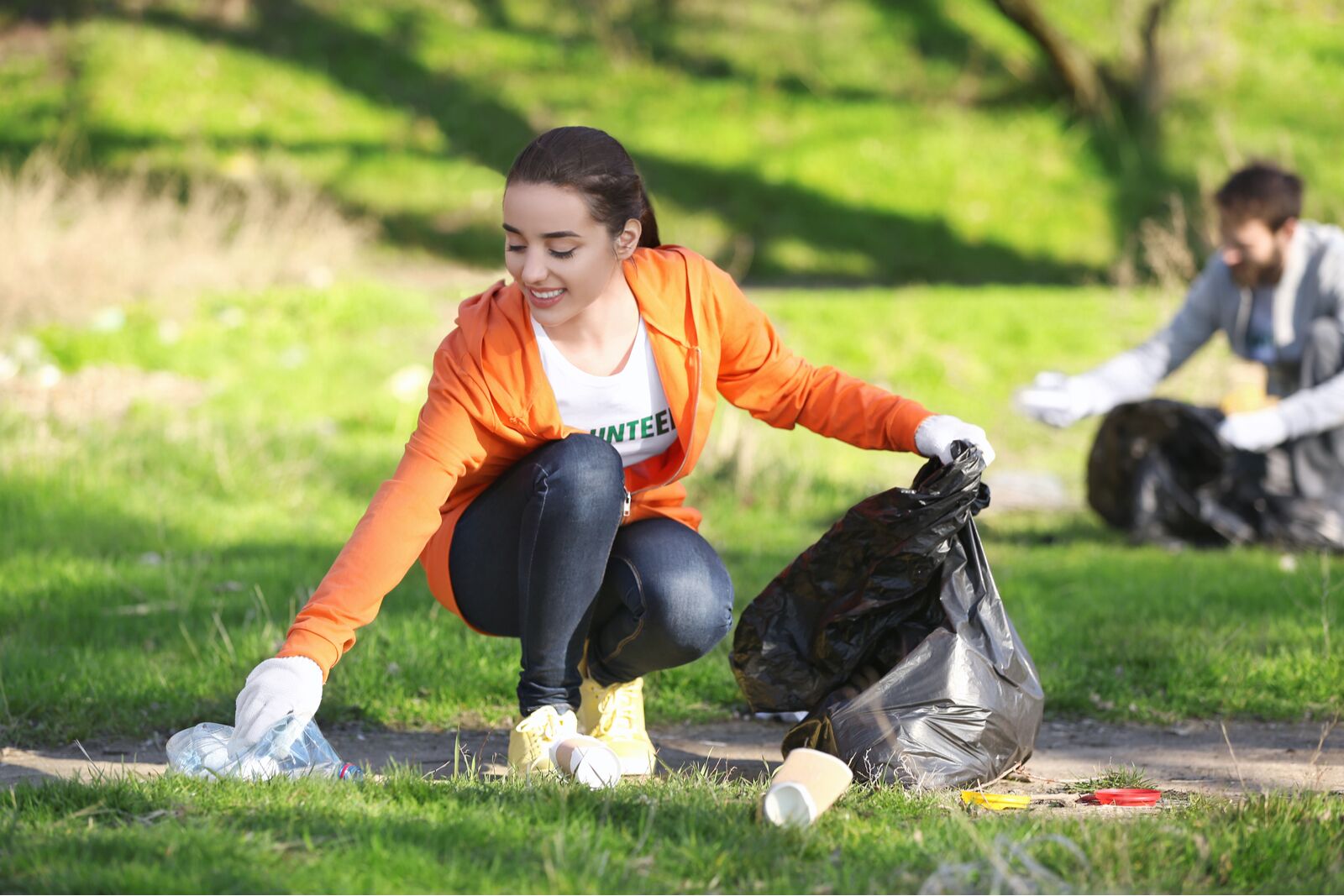 I really hope she’s picking up trash and not setting down trash she weirdly brought with her in that black plastic bag. Photo: Africa Studio/Shutterstock

The most important rule to remember on the trails is do not litter. For your benefit, don’t litter, as reactions from your fellow hikers could range from dirty looks to reporting you to a park ranger to something far more confrontational. But really, don’t litter because it’s horrible for the planet and people; what’s the point of making so much effort to spend time in nature if you’re just going to fill it with trash?

And remember: littering isn’t just plastic bottles and cigarette butts. Litter is anything that doesn’t occur naturally in the environment you’re in, including things like banana peels, coffee grounds and liquid, and toilet paper. If there’s no other hiking tip you remember, remember this one. 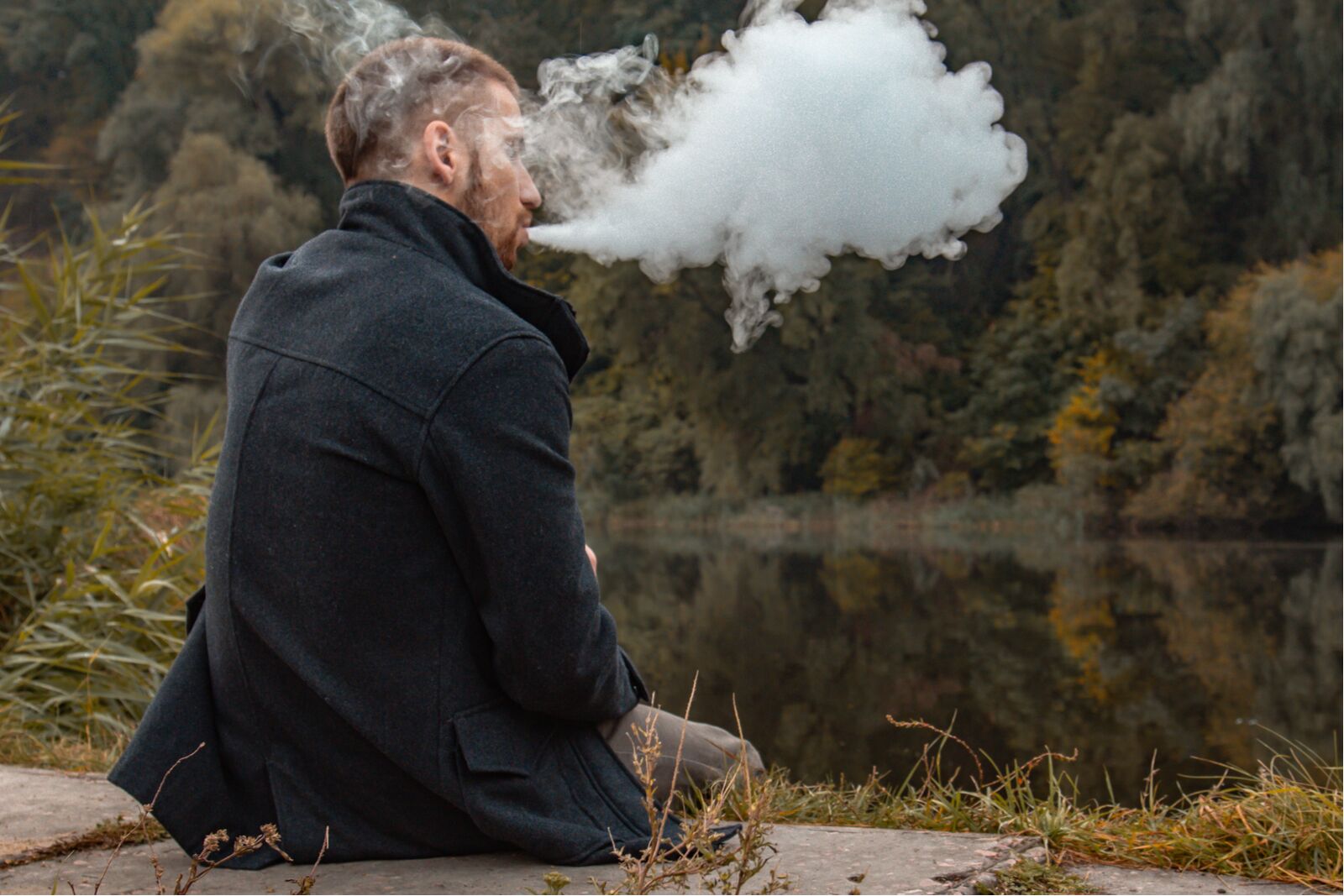 A guy displaying bad behavior. (Unless there’s just a tiny trail behind him in the distance, in which case, sorry, guy.) Photo: Yuliia Hurzhos/Shutterstock

I’m not here to tell you how to live your life, and if you smoke cigarettes, that’s up to you. But the last thing anyone wants is to smell cigarette smoke when they’re enjoying the fresh air — nor does anyone want a forest fire to start because someone was careless with their cigarette butt (oh, and if you do start a fire, even on accident, expect to go to jail). While it seems a little strange to huff and puff up a mountain only to smoke a cig at the top, you’re allowed certainly allowed to. But you need to go as far away from other hikers as possible, especially if there’s a breeze. And always try to smoke downwind whenever possible.

In the hiking community, you’ll generally find that most folks are kinder to cannabis than nicotine. But all the same, it’s best not to light up if there are other people around, regardless of what you’re smoking.

5. Not moving when you should 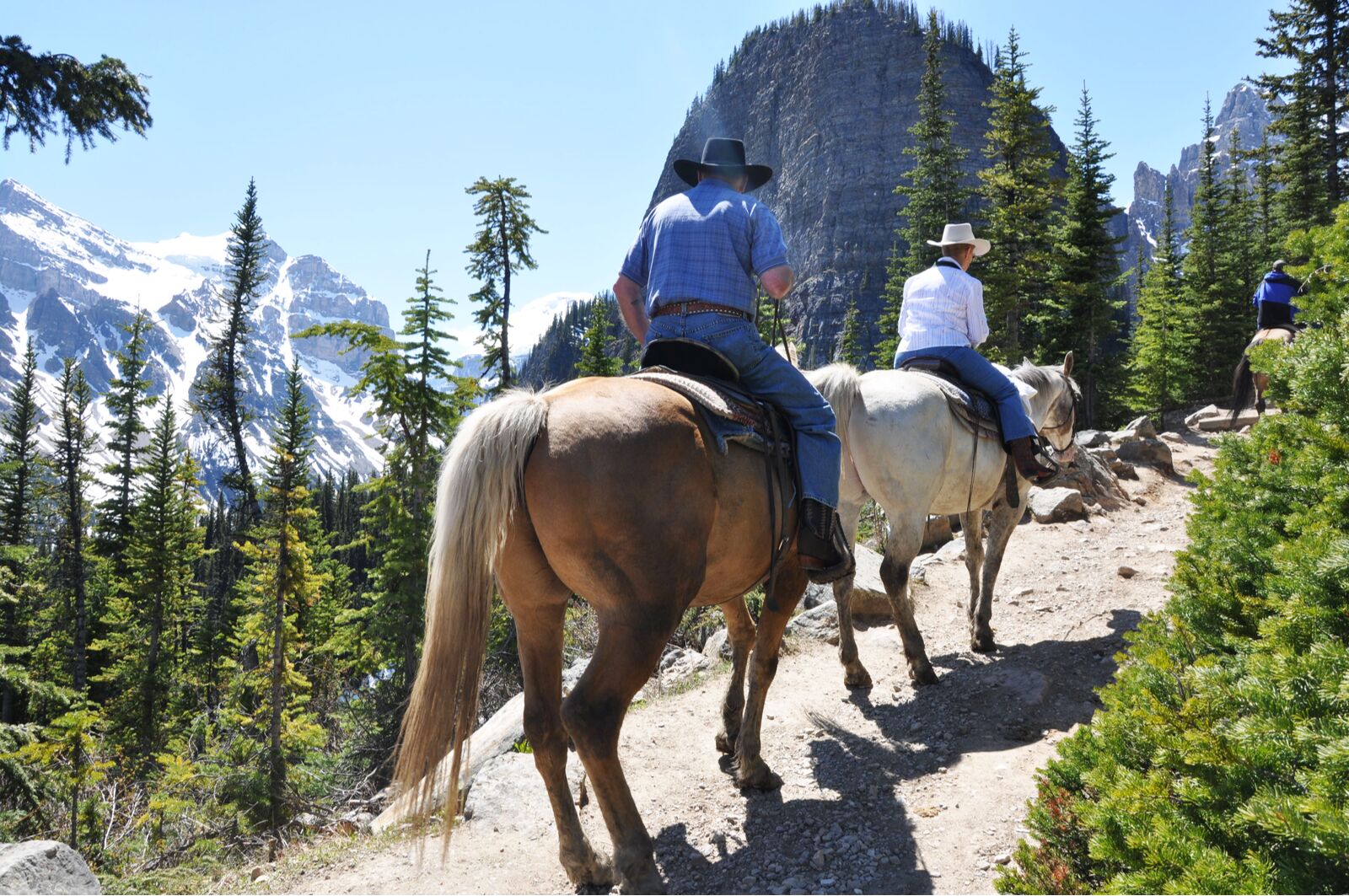 Do hikers have the right of way when encountering a horse on the trails? Neigh. Photo: my leap year/Shutterstock

If you’re on a trail built just for hikers, it’s pretty easy: people going uphill have the right of way, so all you have to do is step aside if someone is coming up while you’re coming down. But on mixed-use trails, there’s a different hierarchy: everyone yields to equestrians, hikers yield to equestrians but not bikers, and mountain bikers yield to everyone. But in a real-world hiker-biker situation, it’s almost always easier for the hikers to step aside, especially if a mountain biker is trying to climb up a steep section.

When encountering equestrians, try to step off the trail enough to give the horses a few feet of space, but you don’t need to move too far. Horses get spooked easily, and it’s better if they can see you rather than you ducking behind a rock.

If you’re a hiker, it’s nice to yell when a mountain biker passes you something like “just me” or “one more up ahead,” so the biker knows if they need to keep an eye out for more people (and if you’re biking, you should relay the same information to any hikers you pass). Make sure you can hear people coming and going behind you if you’re wearing headphones. 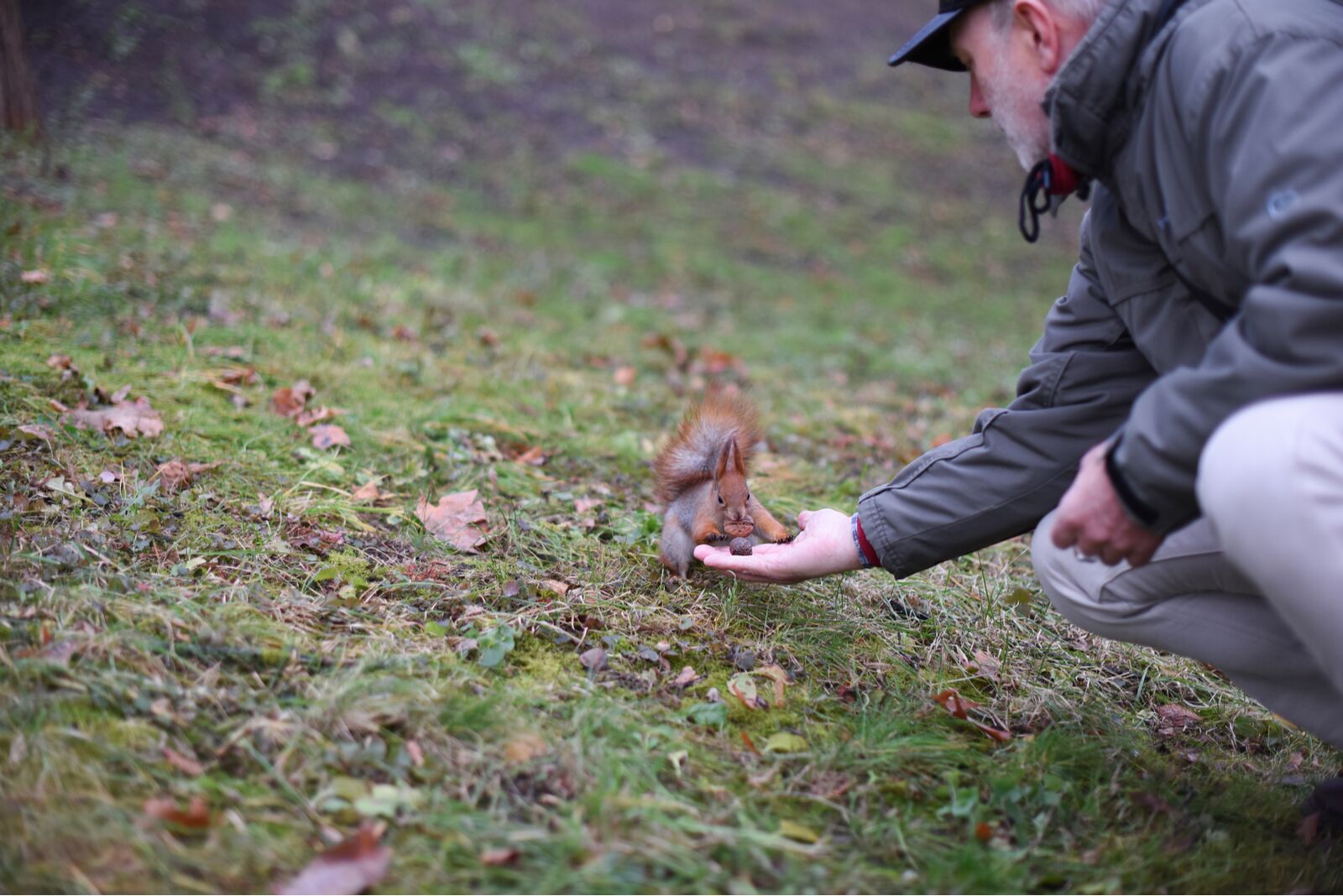 One guess who the smarter creature in this photo is (hint: it’s not the guy feeding a wild animal). Photo: TetiBond/Shutterstock

It may seem cute to throw a piece of your trail bar to a chipmunk, but it’s not — it’s harmful to the chipmunk. When hiking, it’s important to remember that you’re in an animal’s home, and the onus is on you to have as little impact as possible. It’s your responsibility to keep wildlife wild. And when you feed animals, they begin to associate people with food, which is the exact opposite of being wild. Your food could also be harmful to the animals, or it could cause them to start seeking out humans, resulting in that animal being euthanized. This is a big part of why you shouldn’t leave food on the trails, even if it will (eventually) decompose.

On that note: if you’re hiking in a national park, read up on the wildlife regulations specific to that park; for example, Yellowstone National Park requires you to stay at least 100 yards from wolves. You can be fined or jailed for getting too close to wild animals. If you’re not sure how close you can get, use this general rule: if the animal has to change its behavior at all because of you, you’re too close. 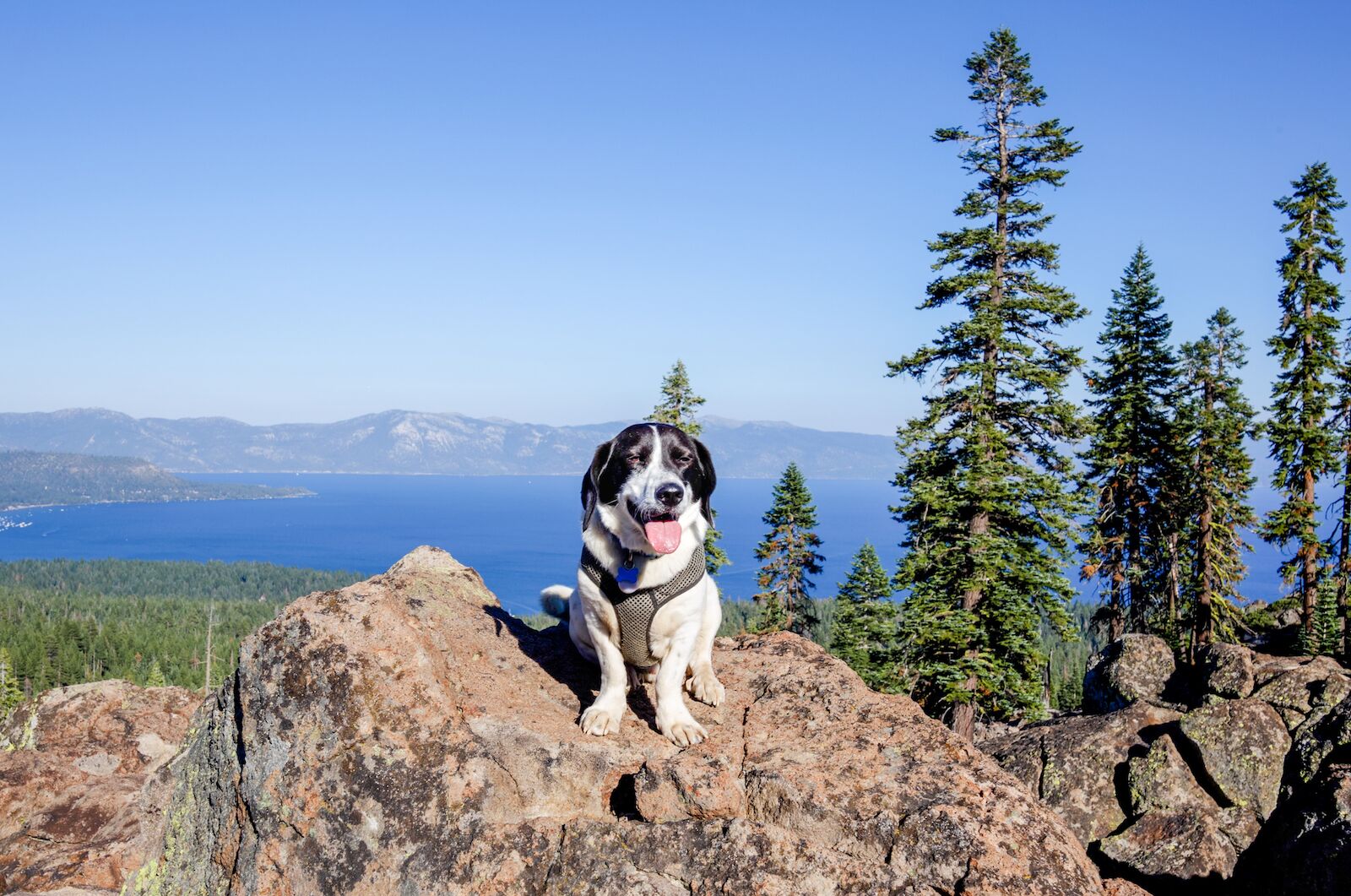 There’s no joke here: this is my dog, and I wanted you to see how cute he is. He would never commit a hiking taboo, though. Photo: Suzie Dundas

It should go without saying that dogs can only accompany you on dog-friendly trails (which many in national parks are not, by the way). But just because a trail is dog-friendly doesn’t mean it’s free rein for your dog to go crazy. If not on a leash, your dog still needs to be under your voice command. Your fellow hikers may have a fear of dogs, or they may be with their own dogs who don’t appreciate having an off-leash pup run directly into their faces. My dog is my favorite trail buddy on the planet, but a domestic dog is not a natural part of a woodland environment. They can spook wildlife like bears and rabbits, and their scents can confuse smaller mammals.

And don’t forget that allowing your dog to roam free may expose him to water-borne pathogens like giardia, small predators like rattlesnakes and scorpions, or random things in the woods that could make him or her sick. (Did you know South Lake Tahoe’s mice sometimes carry the bubonic plague? You don’t want your dog eating one of those mice.)

Oh, and by the way: don’t ever, ever, ever leave your dog’s poop bag in the woods. Seriously — if you forgot it, drive back and get it. Leaving it next to a trash can at the trailhead is littering. 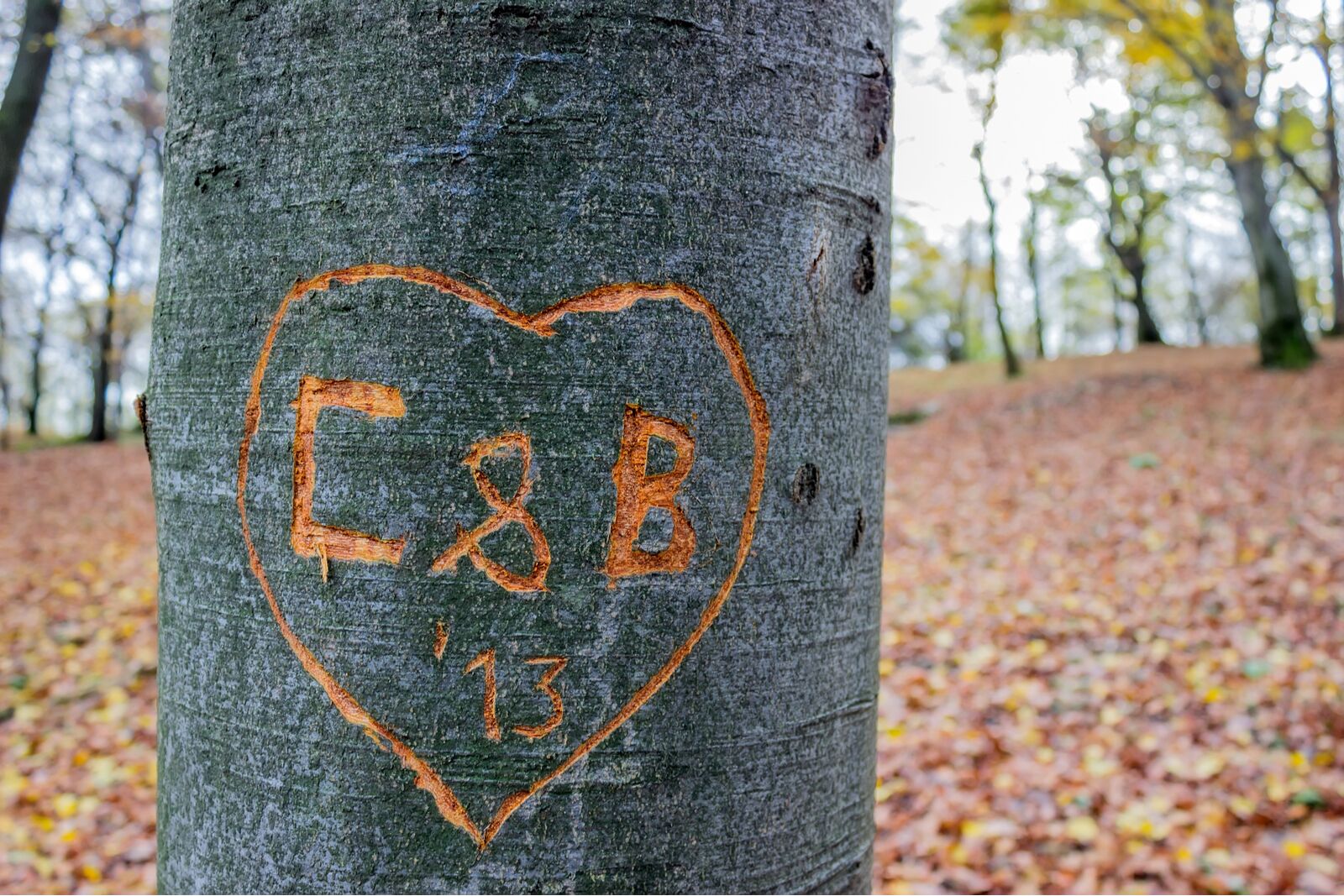 C and B are total jerks and have hopefully learned the error of their ways since 2013. Photo: serato/Shutterstock

Fun fact: it’s possible to go for a hike without letting everyone know you were there. Leaving an impact on the environment is one of the most egregious taboos on the trails; that’s why hikers should practice Leave No Trace principles. But the most egregious — and most illegal — offense is to purposefully deface or vandalize protected sites. That includes scratching your initials into trees (which kills trees), leaving marks on rocks or, unfathomably, defacing sacred, protected, or historical sites. Penalties depend on the state and who prosecutes you, but you could be looking at fines of $50,000 or more and up to three years in jail.

9. Blazing your own trail 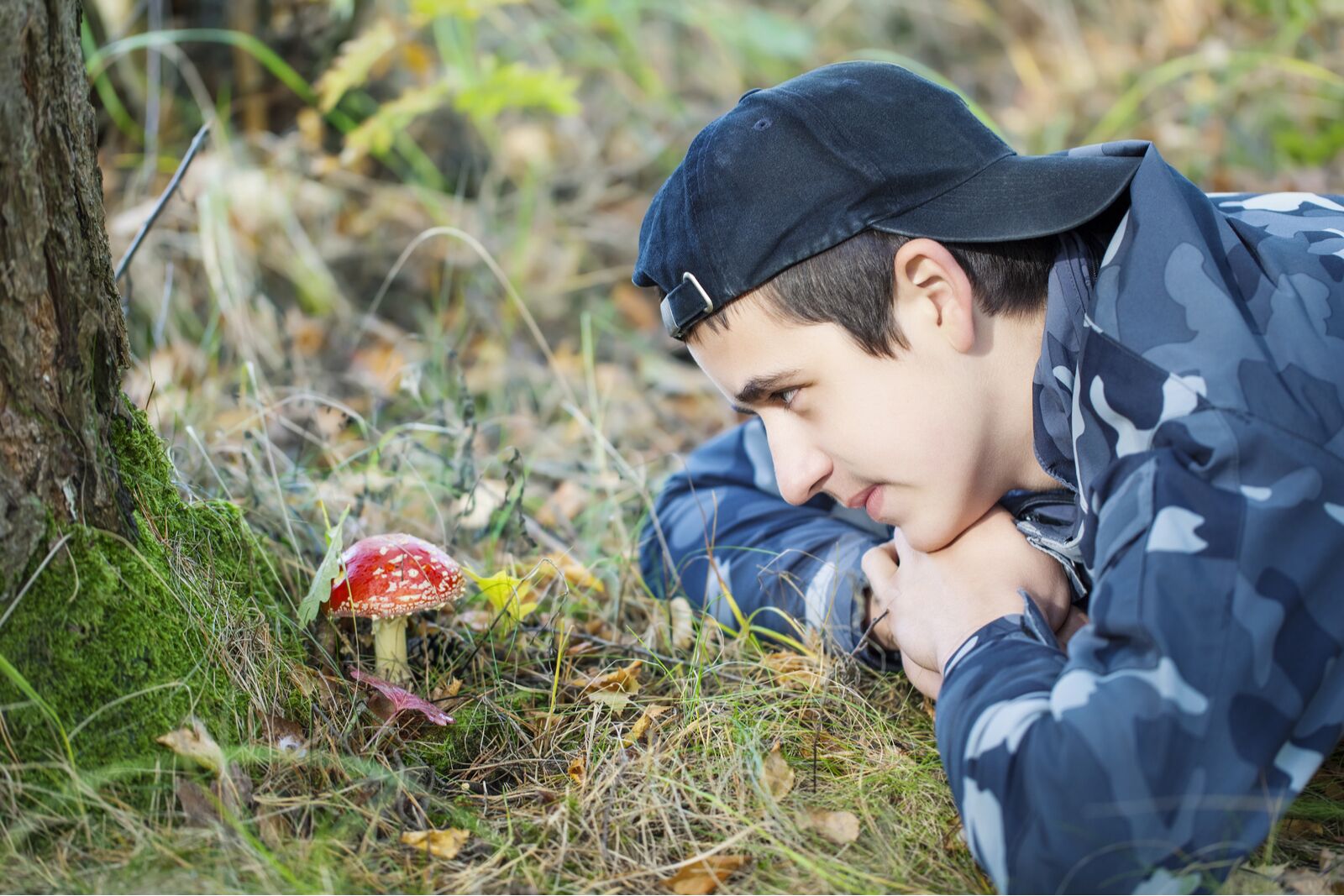 Some hikers, like this child, are weirdly in love with mushrooms. Please don’t break his heart by going off the trail and stepping on them. Photo: Stock video footage/Shutterstock

While hiking, you may think you’re actually being curious by taking a shortcut through the trees to pass people on the trails. But nope: you should always try to stay on the established trail. Going off trail can damage small plants, and the combination of those plants dying and heavy foot traffic can lead to erosion and runoff problems (many trails are intentionally routed to direct drainage and runoff from rain and snowmelt). Blazing your own trail damages ecosystems, even it’s only going around a few trees. Veering very far off trail can also be dangerous if you get injured as it’ll be much harder for rescue teams to locate you.

Hiking10 Tips for Safe and Comfortable Winter Hiking
Tagged
Hiking Outdoor
What did you think of this story?
Meh
Good
Awesome