There’s no denying that Southern states are known for barbecue: vinegar-based sauce on pork in North Carolina (or with a vinegar-ketchup mix Lexington style if you’re in the western part of the state), all things brisket in Texas, and a sweet molasses-based sauce on ribs in Kansas City. Deep in the heart of the South in Alabama, however, there’s a regional barbecue style that gets a lot less love from out-of-state barbecue fans: chicken drenched in Alabama white sauce.

Many of the most popular barbecue sauces are made for beef or pork. Alabama white sauce started as explicitly a chicken sauce — though few would complain about turkey, pork, fish, coleslaw, or potato salad smothered in the mix. Depending on who you ask, it’s also the perfect dip for all manner of fried foods, and some even use it as a condiment for burgers.

Alabama white sauce is, as the name suggests white, which immediately sets it apart from the more common vinegar, mustard, or tomato-based sauces. Recipes vary by who’s doing the cooking, but it always starts with a mayonnaise base and has apple cider vinegar, lemon juice, and black pepper thrown in the mix.

According to legend, it was created by Big Bob Gibson in 1925 in Decatur, Alabama. He needed a way to keep his barbecue chicken moist as it cooked for hours in a hand-dug pit during home cookouts. Mayo was the answer. Gibson’s cooking became so popular that he left his job working with a railroad company and opened a barbecue joint that served pork and his famous chicken with Alabama white sauce.

Gibson’s children, then grandchildren, and now great-grandchildren have kept the tradition alive over the past century along with a few other purveyors in the state.

Even after all these years, Alabama and its signature sauce lacks the recognition that other barbecue sauces and styles get. Yet for barbecue chicken fans, there are few better condiments to season on your slow-cooked bird.

An underappreciated style waiting for it’s time to shine 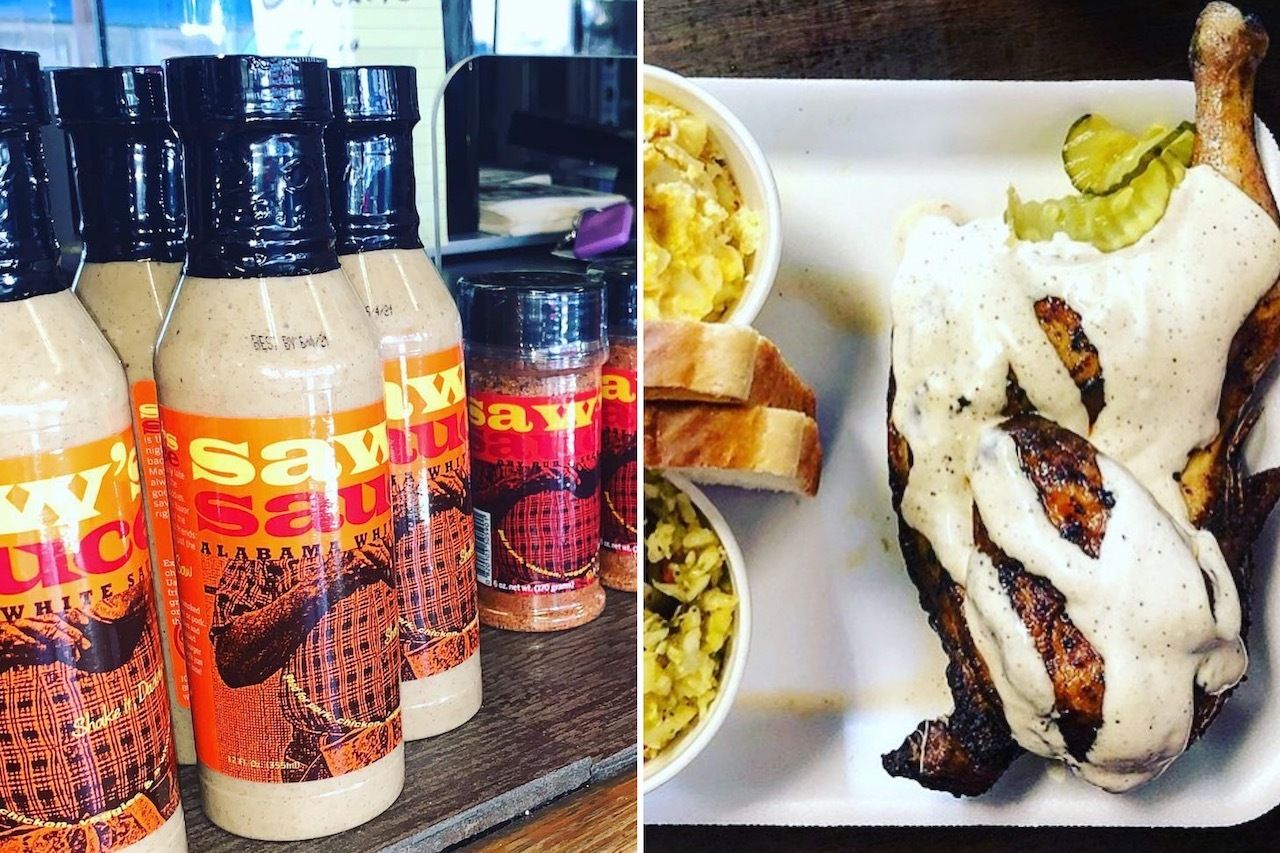 It’s often hard to nail down why one food makes national waves while others stay under the radar. Sometimes all it takes is a viral TikTok for seemingly every corner of the country to focus on a recipe. Alabama white sauce has not had that shot at fame yet.

“Honestly, it’s just a smaller market that doesn’t get as much national attention, and it being used primarily only for chicken doesn’t help,” says Matthew Statham, chef at Saw’s BBQ, which has multiple locations in Alabama. “Mayo can be so polarizing, it may hold it back. Also, with it being created and primarily used for chicken, it limits the amount of backyard barbecue that it will impact.”

Still, when someone finds Alabama white sauce and becomes a fan, it really hits. Two of the top four sellers at Saw’s BBQ come with white sauce, Statham says, “and for a place primarily founded on pork, which doesn’t come with it on the menu, that’s quite a large percentage.”

Statham isn’t the only one, and Alabama white sauce is slowly making its way to other states. Denver-based spice company Savory Spice sells an Alabama white sauce. Cofounder Mike Johnston created it as part of a collection of eight sauces inspired by his favorite regional barbecue flavors. Duce Raymond of Sweet Baby Ray’s BBQ in the Chicago area created his own as well and calls it Alabama White Gold. Raymond hadn’t seen the sauce style in his part of the country, but added it to his menu after trying Gibson’s original at a National Barbecue Association event.

“There’s really something special about it,” Raymond says. At Sweet Baby Ray’s BBQ, the chicken is submerged in buttermilk, pickle juice, salt, and sugar overnight, then gets a barbecue rub before it’s cooked in the smoker. Finally, the chicken is doused in Alabama white sauce and grilled.

“We describe it as when the magic happens,” Raymond says. “With the brined chicken on the grill with the Alabama white sauce basted on right at the end that covers the chicken, it’s some of the best flavors in the world.”

That doesn’t mean everyone is a fan right from the start. Barbecue is steeped in traditions and once barbecue fans find the sauce they like (especially when it’s a regional specialty) they tend to stick with it. Raymond has seen the hesitancy to change among his own customers. His dad started Sweet Baby Ray’s — one of the most popular barbecue sauce brands in the country — and he notes there was some resistance when he initially changed the chicken on the menu at the Sweet Baby Ray’s restaurant to one made with Alabama white sauce.

“When people hear about it they’re like, ‘No we want the normal,’” Raymond says. “But people who try it say, ‘This is amazing.’ So there’s a little bit of a learning curve. The biggest challenge is just getting people to try something new.”

The keys to a proper Alabama white sauce 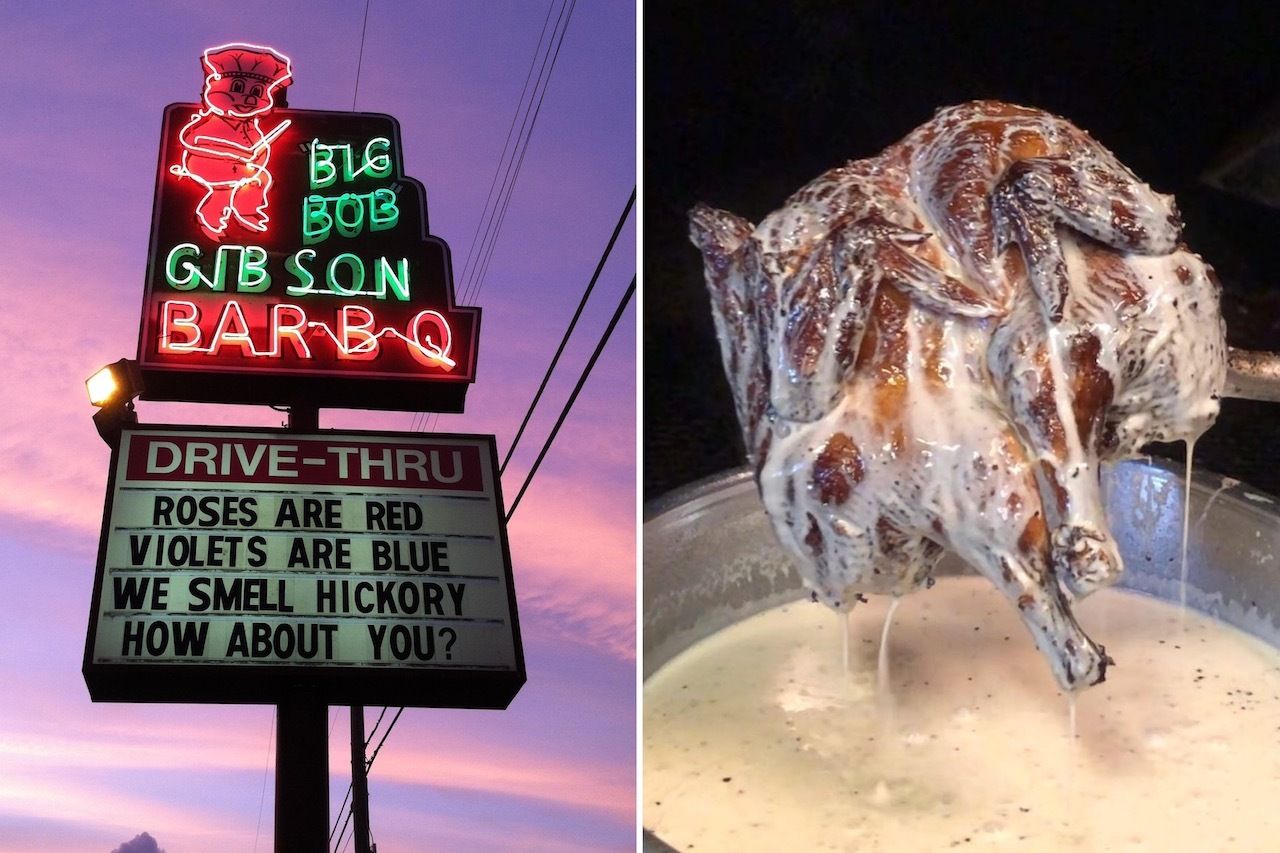 The sauce has taken on a few modifications over the years, though the key characteristics remain: “It needs to be thin and creamy with a tangy bite,” Michael Kimball, the test kitchen manager at Savory Spice, says, adding that “mayo and vinegar are the essential ingredients.”

Savory Spice makes its variation with a smoky spice blend, horseradish, and plenty of alliums (the plant family that includes onions and garlic). Raymond makes his version a touch sweeter and adds horseradish and a little cayenne to the mayonnaise, vinegar, and lemon juice.

“The acidity of Alabama White brightens and heightens flavor while fat-filled mayo helps carry fat-soluble flavor compounds to your taste buds,” Kimball says. “This flavor-enhancing combo makes whatever you put it on taste better and more like itself and adds a complementary horseradish bite.”

Despite being picked up and sold outside of the state, the verdict is still out for when Alabama white sauce gets to the level of fame as Carolina vinegar sauce or thick and saccharine Kansas City sauce. Still, Alabama white sauce is a hit wherever it goes. Raymond sells Alabama White Gold at his restaurant and online through his company Duce’s Wild. It’s currently the brand’s bestselling sauce, and sales top even the competition sauce that Raymond considers his flagship.

“It just really depends on where you’re from and what you’ve been exposed to,” Raymond says. “I think Alabama chicken [with white sauce] is something that could be a lot more popular, but people just have to be exposed to it.”

Where to try Alabama white sauce 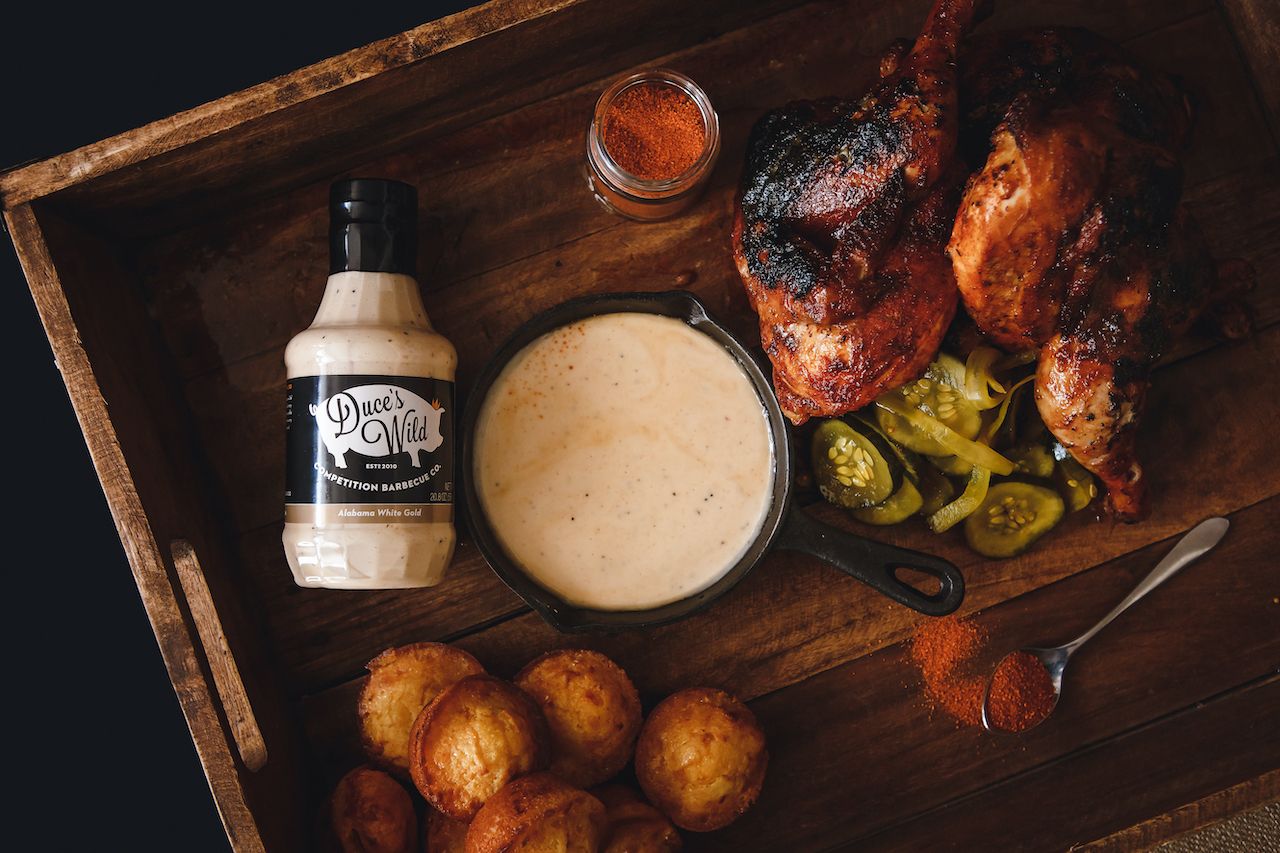 Big Bob Gibson Bar-B-Que in Alabama: The one that started it all. The restaurant still puts the original sauce on chicken platters and sandwiches, or if you’re really looking to fill the table, you can order whole chickens that come with a pint of the sauce (or just order a bottle online and use the original Alabama white sauce for whatever you’d like).

Saw’s BBQ in Alabama: Described as “savory sweet,” Saw’s puts its white sauce on its popular smoked chicken, which you can order by the plate or in a sandwich. The sauce only makes it on two menu items, but they’re among the most popular. You can also purchase the restaurant’s white sauce to take home.

Where: Multiple locations in the Birmingham metro area

Sweet Baby Ray’s Barbecue in Illinois: One of the rare barbecue spots selling Alabama white sauce outside of the namesake state. You can order it on pulled chicken, a half chicken, or a whole chicken, or get it online from Duce’s Wild.

At home: In addition to the locations above that fill online orders for white sauce, Savory Spice shop sells its small-batch white sauce for all your grilling needs.

Book these gorgeous Birmingham Airbnbs near the World Games

6 things Alabamians won’t tell you about their state

7 ways you can survive summer in Alabama

You know you’re in Alabama when…

7 inevitable side effects of living in Alabama

9 ways to totally humiliate yourself in Alabama

9 things people from Alabama can be proud of

10 phrases guaranteed to insult an Alabamian

6 things the world needs to thank Alabama for