Maybe this year is finally the year you decide to organize a ski trip to the Alps. As appealing as the idea is, it can also be daunting. Not only do you have to decide on a ski area, but you also need to book flights and reserve lodging. Add in meals and, if you’re traveling as a family, ski lessons or babysitting — and the logistical and financial implications of a family Alps adventure start to sink in. To borrow a page from the beach vacation, an all-inclusive may be the easiest way to go. 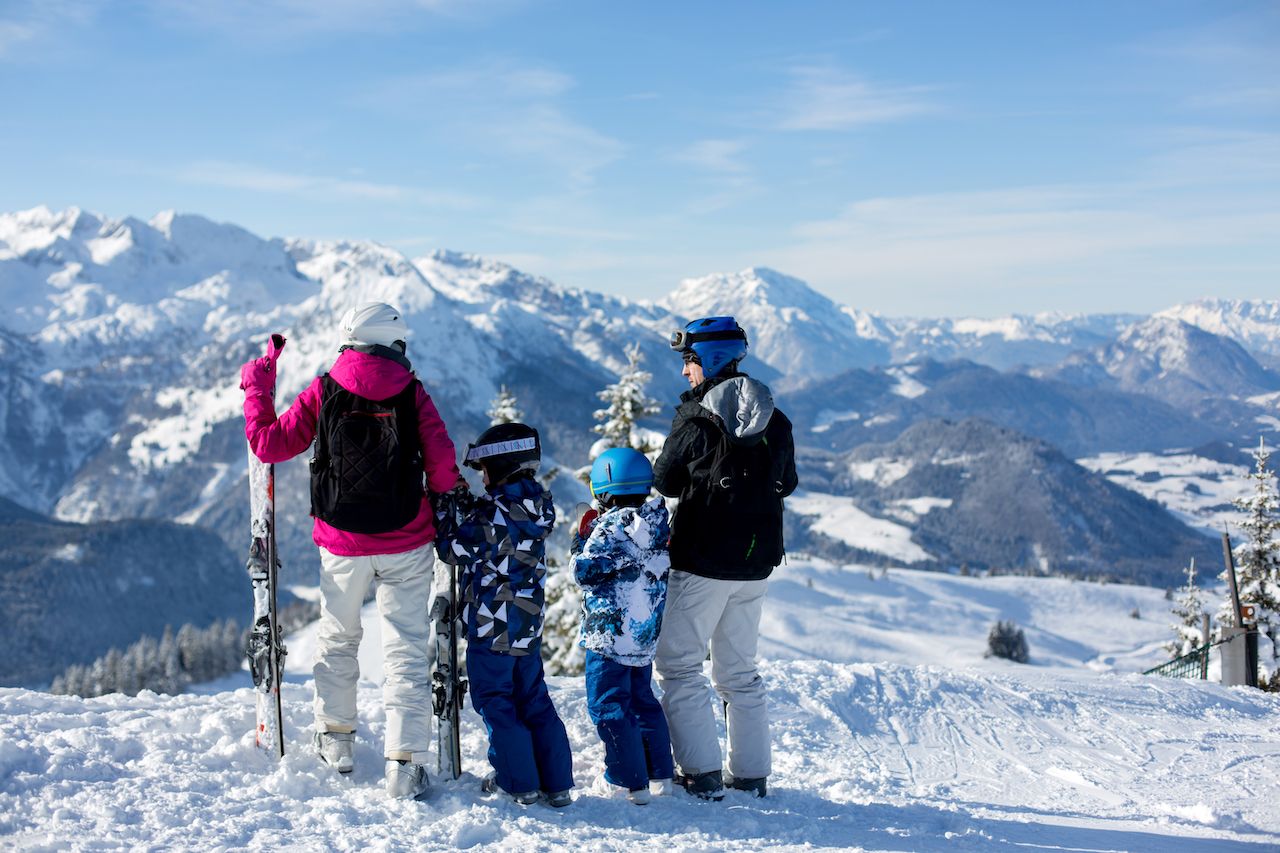 If you’re in the middle of an Alpine vacation planning fit, Club Med is here to help you. That’s the idea anyway. Club Med long ago ditched its 1960s reputation as a swinging singles beach destination and now focuses on all-inclusive, family vacations. Outside the US, it’s as well known for its ski properties as its beach locales. Club Med has 17 all-inclusive ski resorts in the French, Swiss, and Italian Alps, three in Japan, and one in China.

In December, we stayed at the Club Med Alpe d’Huez resort in the French Alps, not far from Chamonix and a two-hour drive from Geneva. Club Med Alpe d’Huez existed previously, but following a $110 million renovation, it reopened — on the day of our arrival — as a brand new “Four Trident” resort, to use Club Med’s own metric for its self-awarded luxury designation.

What do you get? 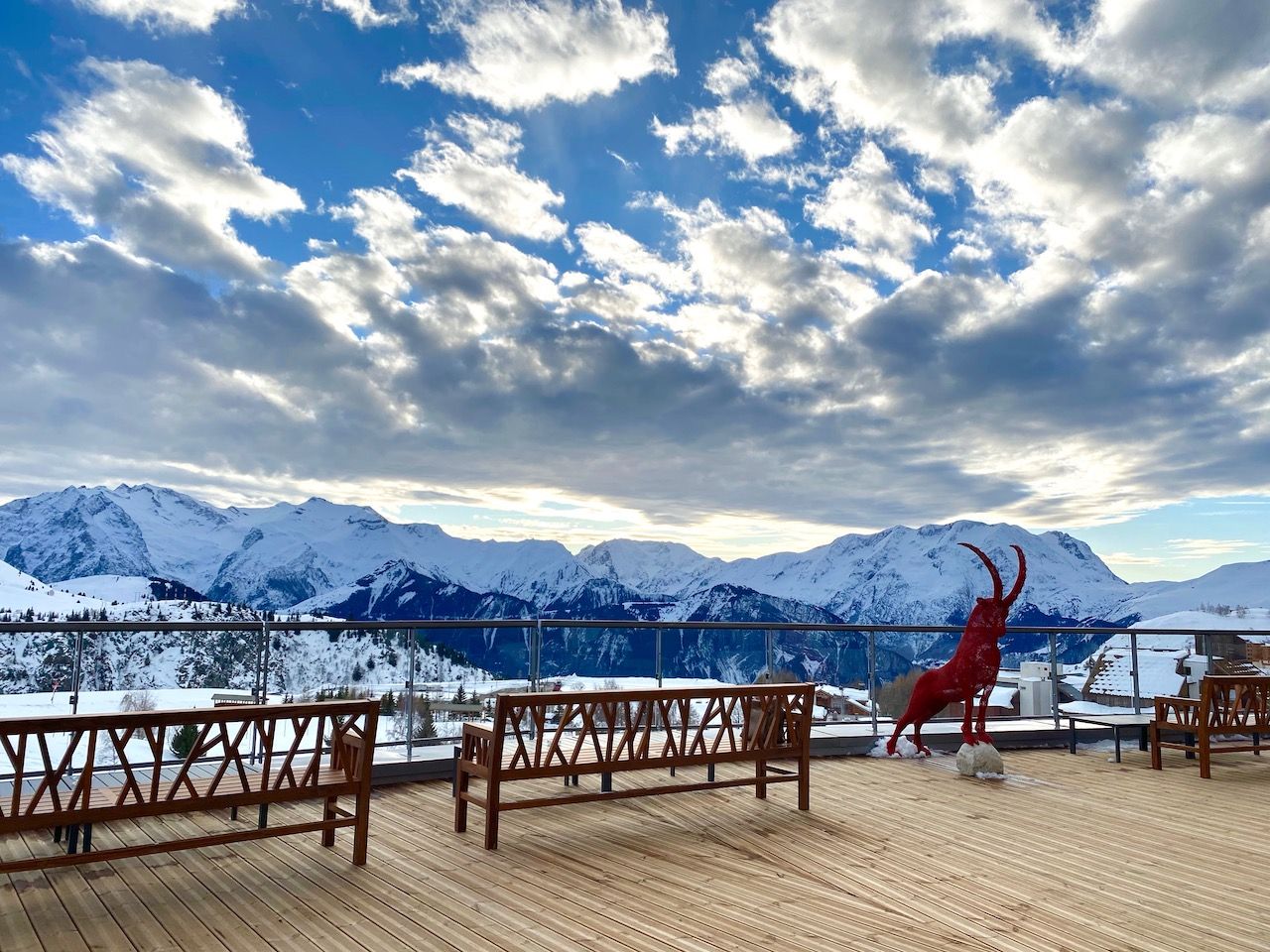 At its most basic, the Club Med all-inclusive ski package offers lodging, all meals, lift tickets, and Club Med “Children Clubs” for kids aged four to 17. It also offers, at additional cost, daycare for kids as young as four months — in brightly hued rooms with meals, activities, and even cribs for nap time. Ski lessons are also part of the standard package at Alpe d’Huez.

Also included in the standard package is some sort of evening entertainment, which will include things like an opening day après ski party and a psychedelic theater production called “Merlin” featuring Club Med employees. You’ll have plenty of food and drink. In addition to the buffet that you’ll visit three times a day, diverse snacks are laid out at happy hour. Hot tea and coffee are available at any time, and you can endlessly refill your draft beer mug at dinner or order wine as well. Only premium wines and spirits are at an additional cost.

What’s good about it? 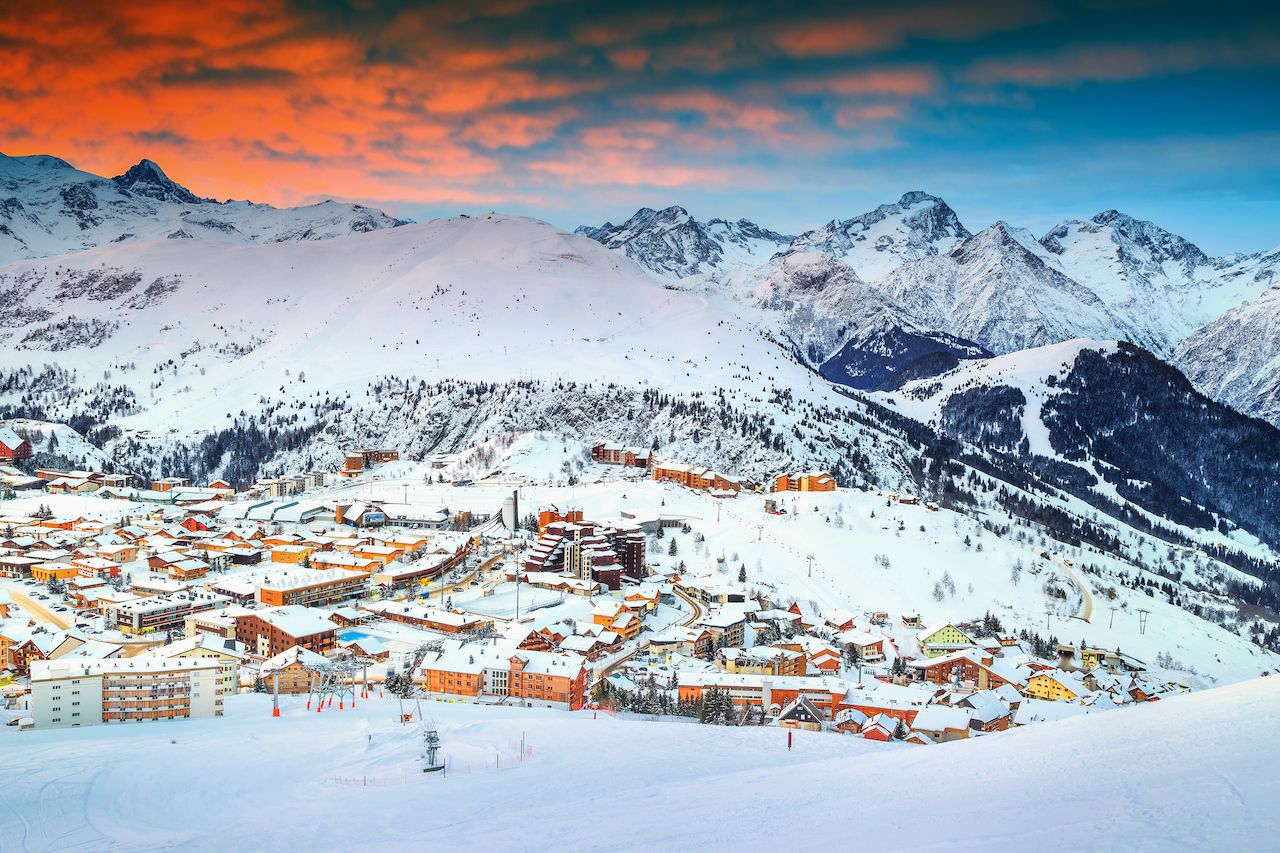 A plus of the Club Med model is “the convenience of not lugging equipment or worrying about ski tickets,” says Shekufeh Samii, a San Francisco resident who went to the Club Med in St. Moritz, Switzerland, with her husband and two daughters a few Februaries ago. She adds, “I’m very spoiled when it comes to skiing, so planning for a ski trip is a big chore for me. They make it easy if you want to ski with a group or an instructor, if you want to ski off-piste, everything is built into the system, so you just have to show up.”

Samii and her family were part of a bigger group of family friends taking a trip together, so the all-inclusive model was especially useful. “Not worrying about dinner reservations for 11 individuals or having to come to a consensus about what time or what kind of restaurants to go to in advance is a major plus,” she says.

Families with kids too young to ski often struggle with babysitting solutions. We’ve addressed some of the challenges of family ski vacations and noted that an all-inclusive is one answer. Even for parents who opt to put their, say, six-year-old in ski school, having it all be right there for you is handy. At 18, my daughter was too old for Club Med’s teen program, but many parents of tweens or younger teens might appreciate having their kids find some companions to hang out with.

The ski lessons/guides offered at Alpe d’Huez were a definite highlight. We joined a former Canadian Ski Team member and other experts in the off-piste groups. One sunny, post-snowfall morning, my daughter, two ski journalists from Colorado, and I donned our avalanche packs and joined Lionel, a local guide who’s made Alpe d’Huez his home for two decades. We carved fresh lines on wide open bowls, traversed along steep pitches to yet more untracked bowls, followed by steep couloirs, and all the while marveled at the immensity and beauty of Alpe d’Huez’s backcountry terrain.

What could be better 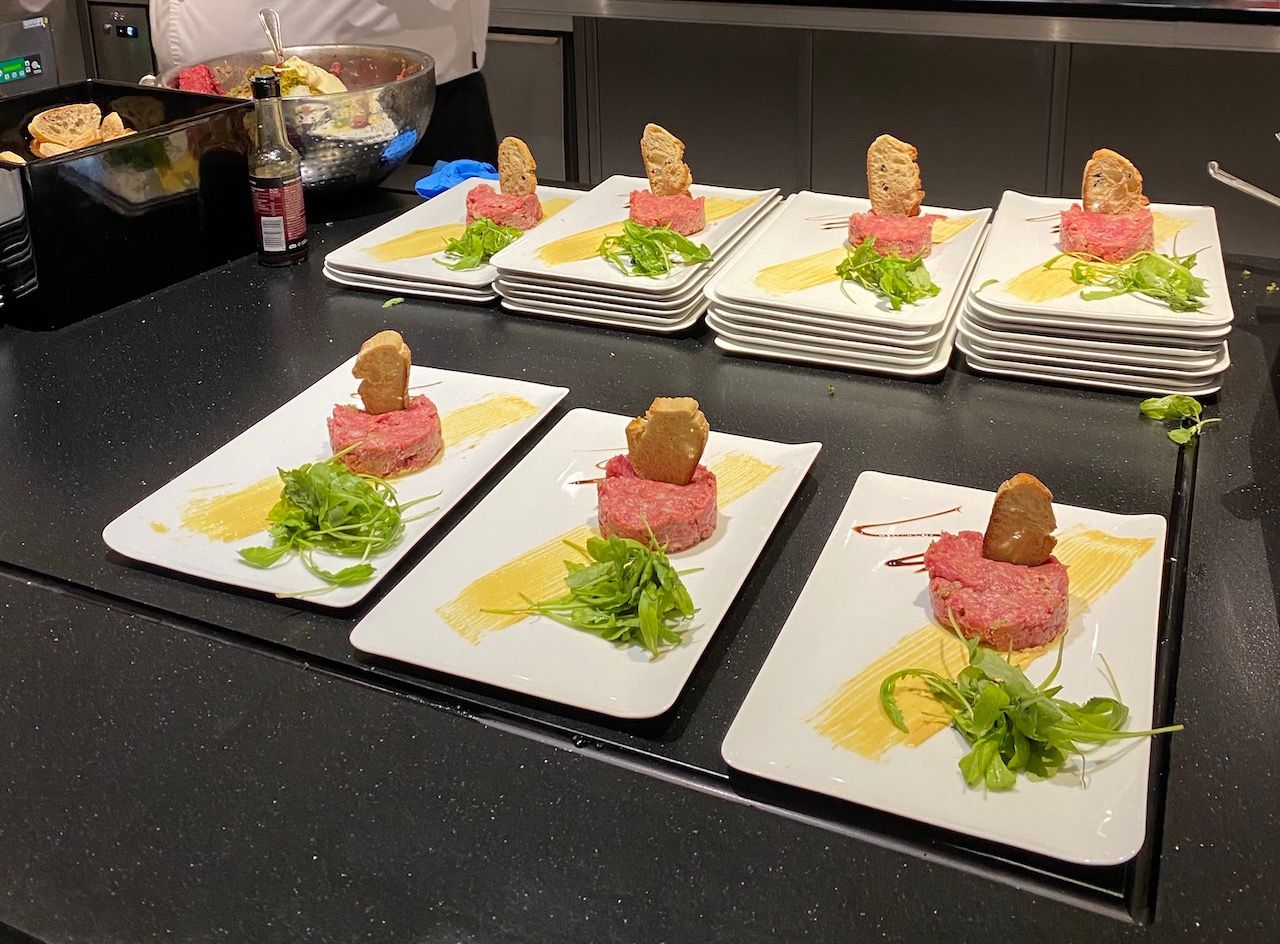 Samii said she didn’t find the food at the St. Moritz Club Med all that tasty. However, we thought the food at the Alpe d’Huez buffet was pretty good. This may have been due to the French influence — but Club Med says its chefs switch resorts every six months, so you won’t necessarily have a French head chef in France. Even with some flavorful options, the buffet did get tiring.

Because the all-inclusive model means you eat all your meals at the hotel, you have to go back there for lunch. It helps that Alp d’Huez is ski-in/ski-out, but with 441 guest rooms, the mammoth resort still required a longish walk from the ski lockers to the buffet area — and that was after you removed and stored your ski boots.

The bigger issue with heading back for lunch at the hotel is that, if you’re supposed to be skiing in the Alps, you should be enjoying some of the other things that make skiing in the Alps so spectacular. Two of those things are the sheer expanse of Alpine resorts and the laid-back food and drink culture.

When you head back to Club Med for lunch, you have less time to explore the far reaches of the Alpe d’Huez resort — or St Moritz, Val d’Isere, Cervinia, or whichever Club Med ski resort you hit up. Alpe d’Huez has over 90 square miles of skiable terrain, or 123 runs. If you really want to explore the massive area, turning around at 10:00 AM to be back at the buffet in time for lunch gets in the way.

It also means you aren’t enjoying those wine-soaked lunches out in the sunshine that skiing in the Alps is famous for. Your center of focus becomes not the charming alpine village your particular all-inclusive might be based in but the all-inclusive itself.

How to make it work for you 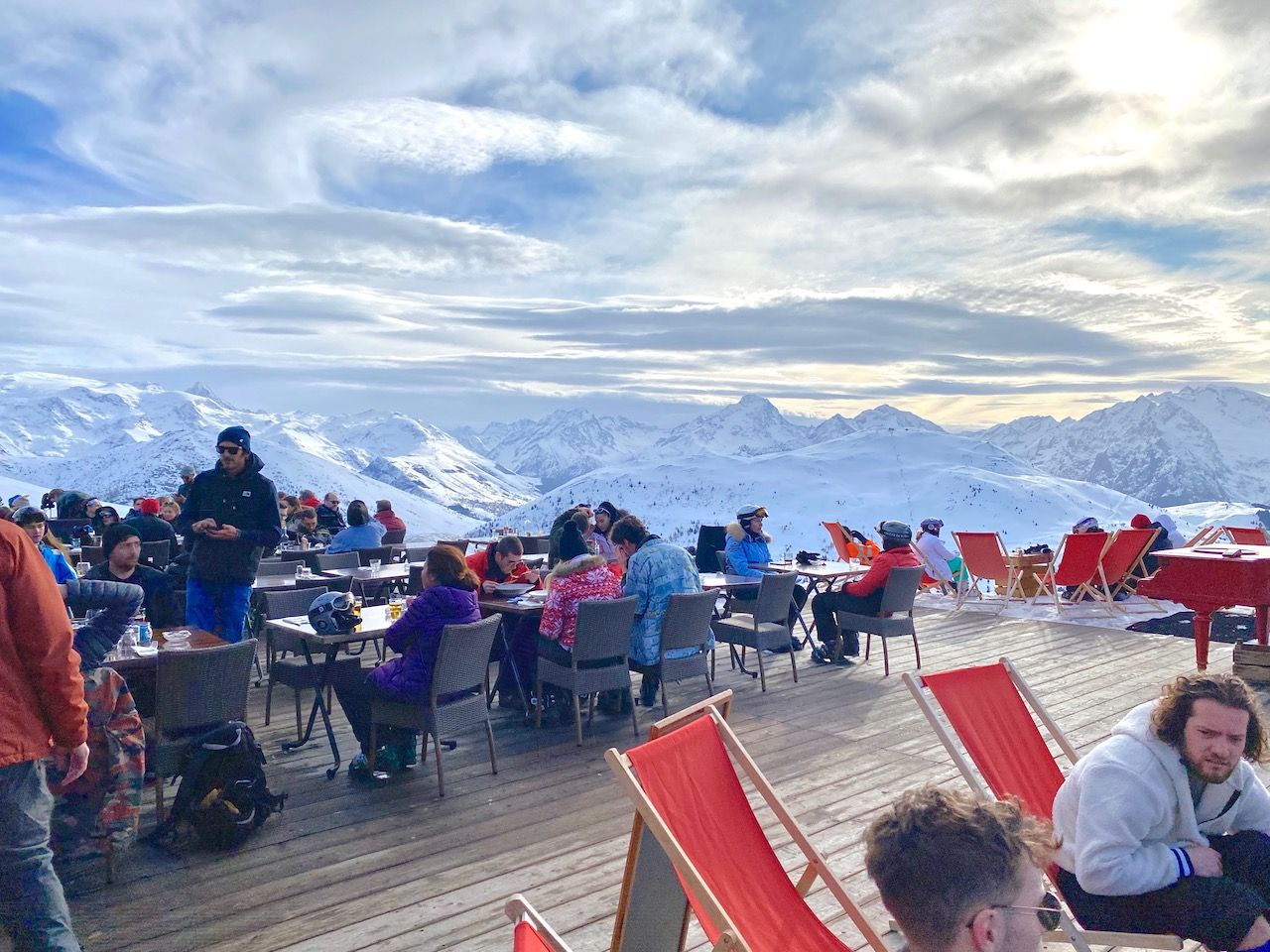 If you’ve booked your Club Med vacation well enough in advance, the pricing can be quite reasonable. According to Joseph Nuñez, PR and Partnerships Manager for Club Med, a stay at Alpe D’Huez costs $284 per night per adult. Book right now for a family of four in March and you could land at $7,300 all in for the week. (Over Christmas week next year, the highest peak pricing, that would be $10,000.) This price includes lodging, food, lift tickets, ski lessons, and the aforementioned entertainment. The earlier you book — six months or even a year ahead — the better the deal.

While the pricing is not bad, we think you should budget just a bit more for a few meals away from the resort. Take the time to explore whatever makes your chosen location special. Spend an afternoon, say, perusing the shops of your mountain village. Dinner at a place like Pizzeria Pinocchio in Alpe d’Huez will charm you with its cozy decor, surprise you at how good a pizza can be, and hardly make a dent in your wallet. (My daughter and my meal came out to $35.)

If it’s a sunny day, ask your ski guide to make a reservation for you at La Cabane. Sit outside — they’ll bring an extra blanket if you need it — and marvel at the mind-blowing mountainscape as you savor a warm goat cheese salad or caramelized pork ribs, washed down with a crisp local Altesse white.

If you’ve got young kids, make sure they take advantage of all of the Club Med kiddie offerings, including using the pool and everything else that little ones consider essential to an epic vacation. Non-skiers can use the cardio room free of charge and make appointments at the spa, which is an additional cost. Another goofy trick is to stick to one part of the buffet at time, so it feels a little more different from day to day. 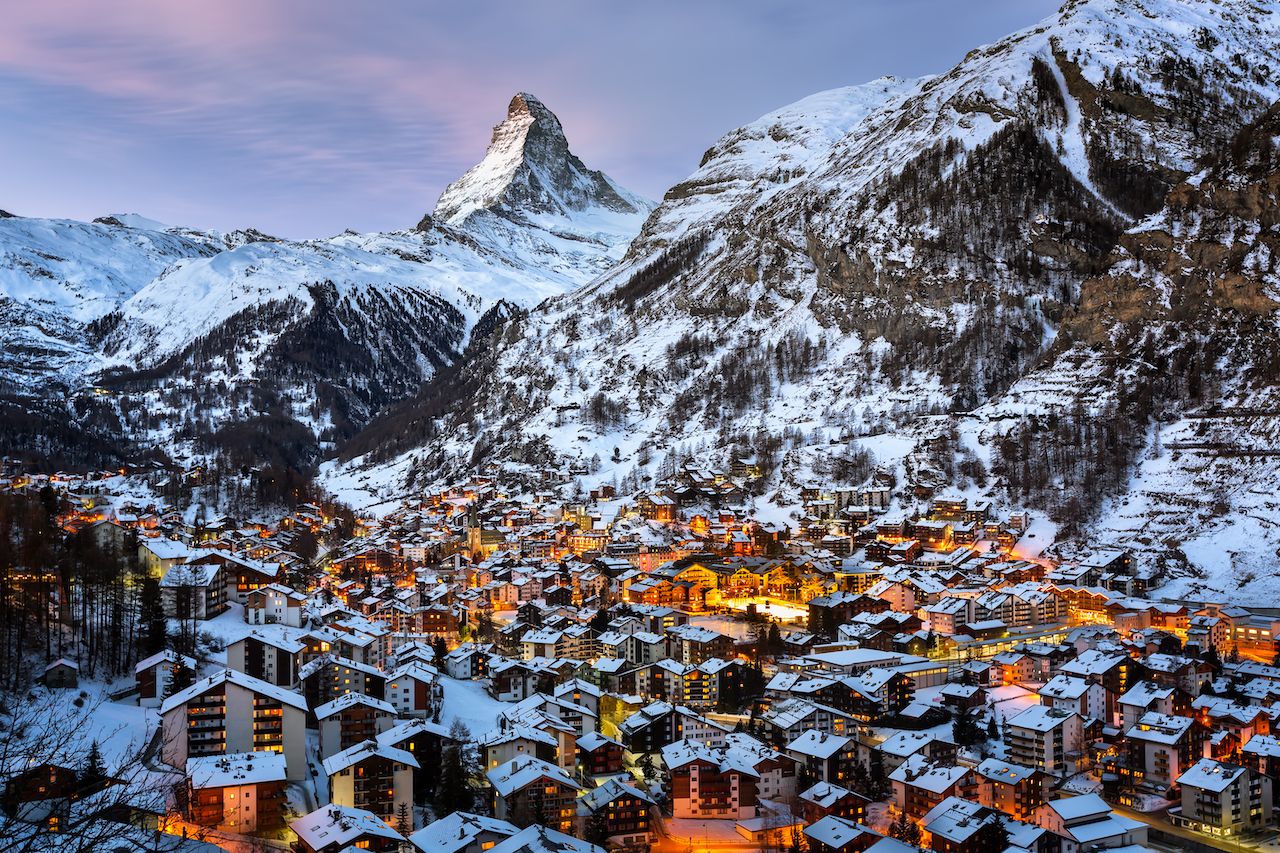 Club Med isn’t the only all-inclusive — although few other ski hotels really offer what Club Med does. The Grand Hotel Zermatterhof advertises an all-inclusive offer for travel to Zermatt, Switzerland, one of the best resorts in the Alps. Along with your lodging, you get a seven-day ski pass, ski rentals, ski lessons, and a full breakfast buffet. (Other meals aren’t included.)

On the other hand, if you have an Ikon Pass ski pass from the US, you get five free ski days in Zermatt. Likewise, with an Epic pass, you can ski in Verbier, Switzerland, for five days or an entire week at France’s Trois Valles or Italy’s Skirama Dolomiti. Even without a US season pass, lift tickets in the Alps tend to cost less than in North America. A six-day, adult Alpe d’Huez ski pass purchased online comes out to $50 per day. At expensive Zermatt, beginners sticking to lower slopes can ski for $54, while experts who want to access the whole mountain can do so for $82. That ain’t cheap, but it isn’t Aspen or Vail pricing either.

Even with less expensive lift tickets, these resorts can be pricey for lodging and food. But look well in advance and you might find an apartment with a kitchen, where you can have most dinners. Shop in town and cook some of your meals, budgeting also for dinners in town and one of those famous Alps lunches on the mountain.

Of course, you would have to do a lot of the legwork yourself to go this non-inclusive route. It depends on you. There are many ways to make an Alps ski vacation work — all-inclusive or a la carte.

Trip PlanningThe Most Unexpected, and Awesome, Places To Ski Around the World
Tagged
Lux Travel Ski & Snow Trip Planning Epic Stays
What did you think of this story?
Meh
Good
Awesome