Although pilgrimages were traditionally done for religious purposes, people today undertake them for a variety of reasons. Maybe you want to walk to enjoy an active vacation or experience a country in a different way. Perhaps you’re drawn to pilgrimages for the opportunity to reflect on life. Is that reset button calling your name? The reasons for wanting to do a pilgrimage are as varied as the pilgrimage paths themselves. From the snow-capped peaks of Tibet to the deserts of the Middle East, this list of lesser-known (yet still incredible) pilgrimage paths has something for every pilgrim. 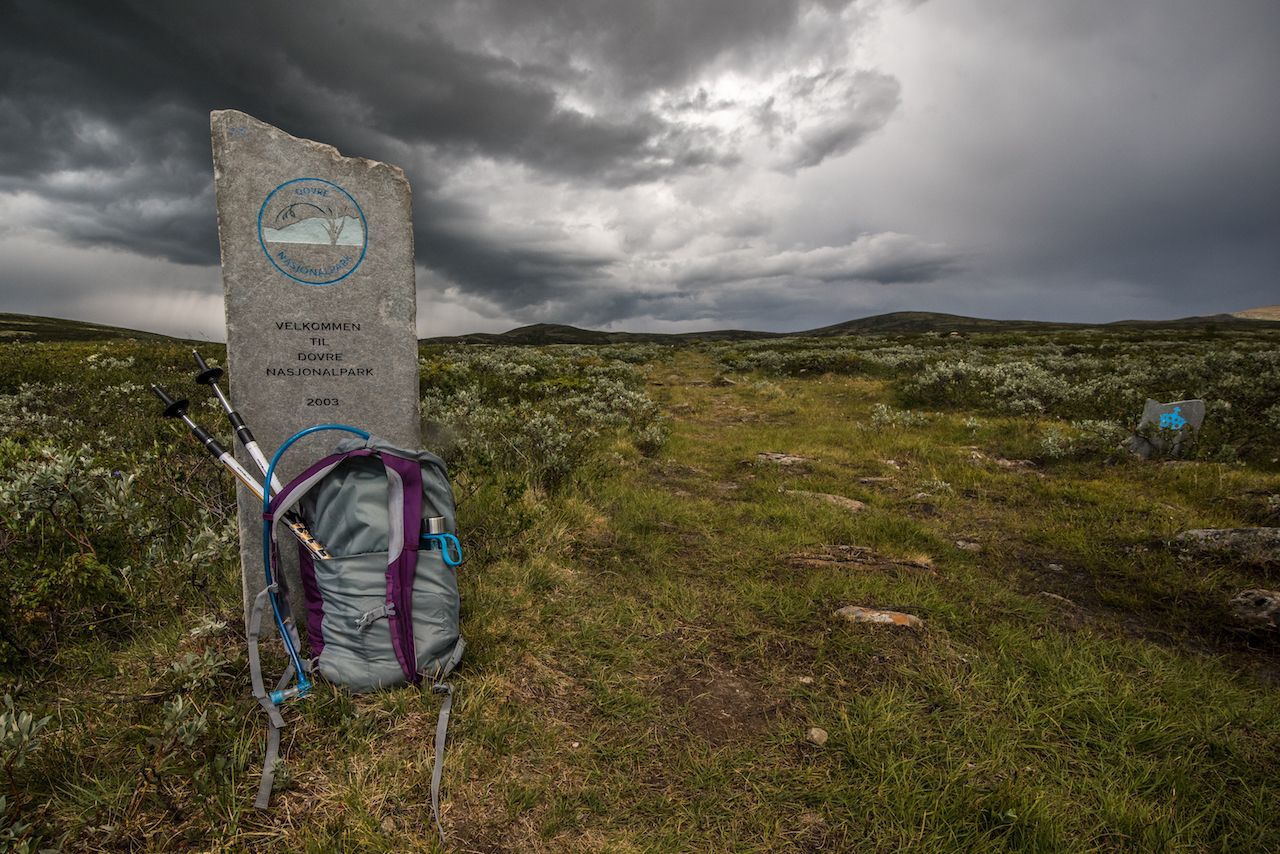 Pilgrims walked the St. Olav Ways in Norway from 1031 until the 1500s, when the Catholic pilgrimage was banned following the Protestant Reformation. In 1997, Norway revived the ancient routes and included signage for them. Today, you have your choice of six pilgrim routes, all of which lead to the impressive Nidarosdomen cathedral in Trondheim. If you’re unsure which route to choose, it’s hard to go wrong since all 1,200 miles of the St. Olav Ways pass through quaint villages and peaceful landscapes.

That said, the majority of pilgrims opt for the 400-mile Gudbrandsdalen Path, which starts in the old part of Oslo and takes a little over a month to complete. From the capital, the route heads north past lakes and through valleys before reaching the remote Dovrefjell mountains. If you’re a serious walker, you’ll revel in the challenge the Arctic highlands present. Once past the snowy peaks, the highest of which is 7,500-foot-high Snohetta, pilgrims make their way down into the country’s prized fjord lands. In general, the trail is well-marked, but beware of unpredictable weather — even in summer. 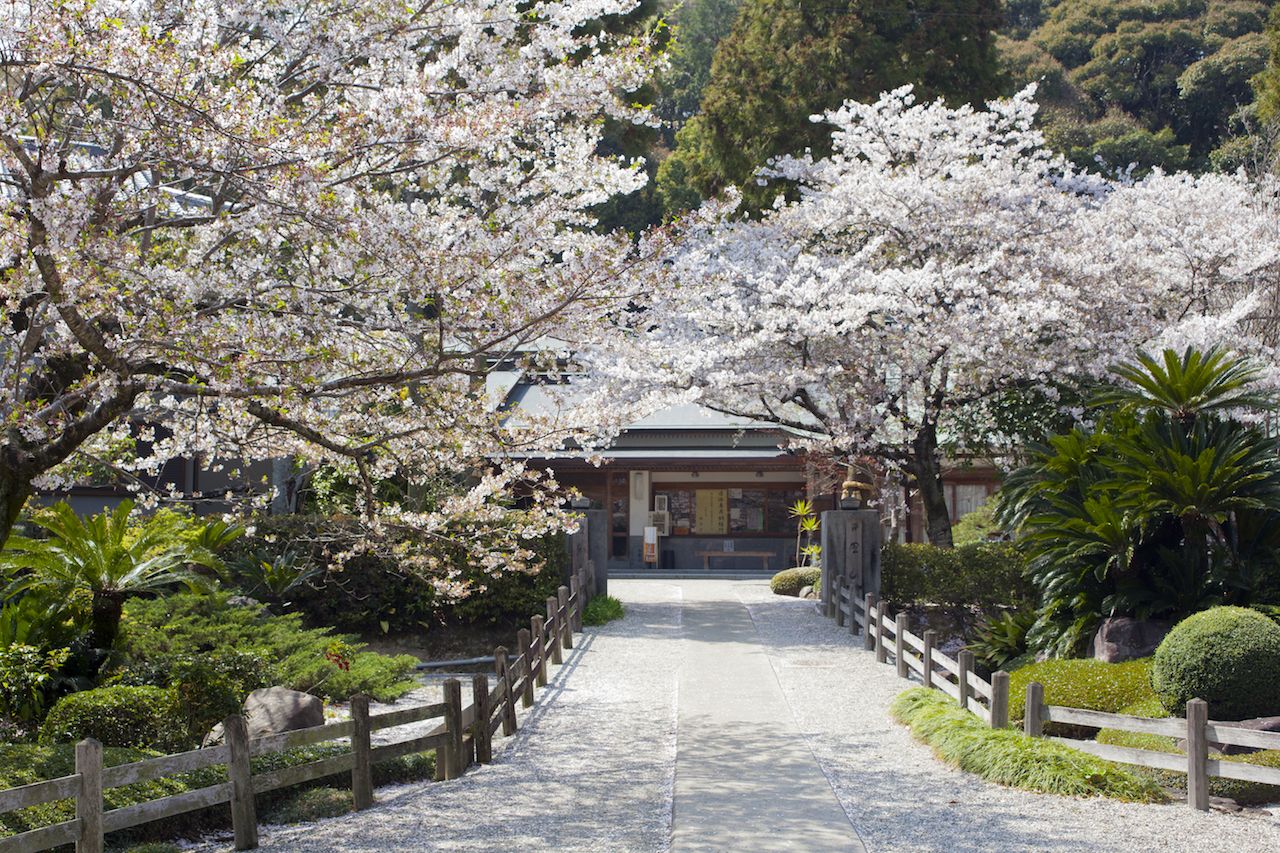 Connecting 88 temples in a sacred loop, Japan‘s Shikoku pilgrimage allows you to follow in the footsteps of monk-saint Kukai — who was born in the late 700s — en route to the center of Japanese Shingon Buddhism. While pilgrims can, of course, enjoy the route in shorter stretches, the entire route totals 745 miles. A full circuit could take you up to 60 days, but the trek seems more manageable with the promise of comfortable accommodation along the way. After a long day of hiking through isolated mountains, you’ll rest your weary feet at ryokans (traditional Japanese inns), temple guesthouses, and the homes of hospitable locals. Experts advise tackling the Shikoku pilgrimage in the spring but to pack for rain. This route passes through some of the most scenic, well-preserved, and wettest areas of Japan. 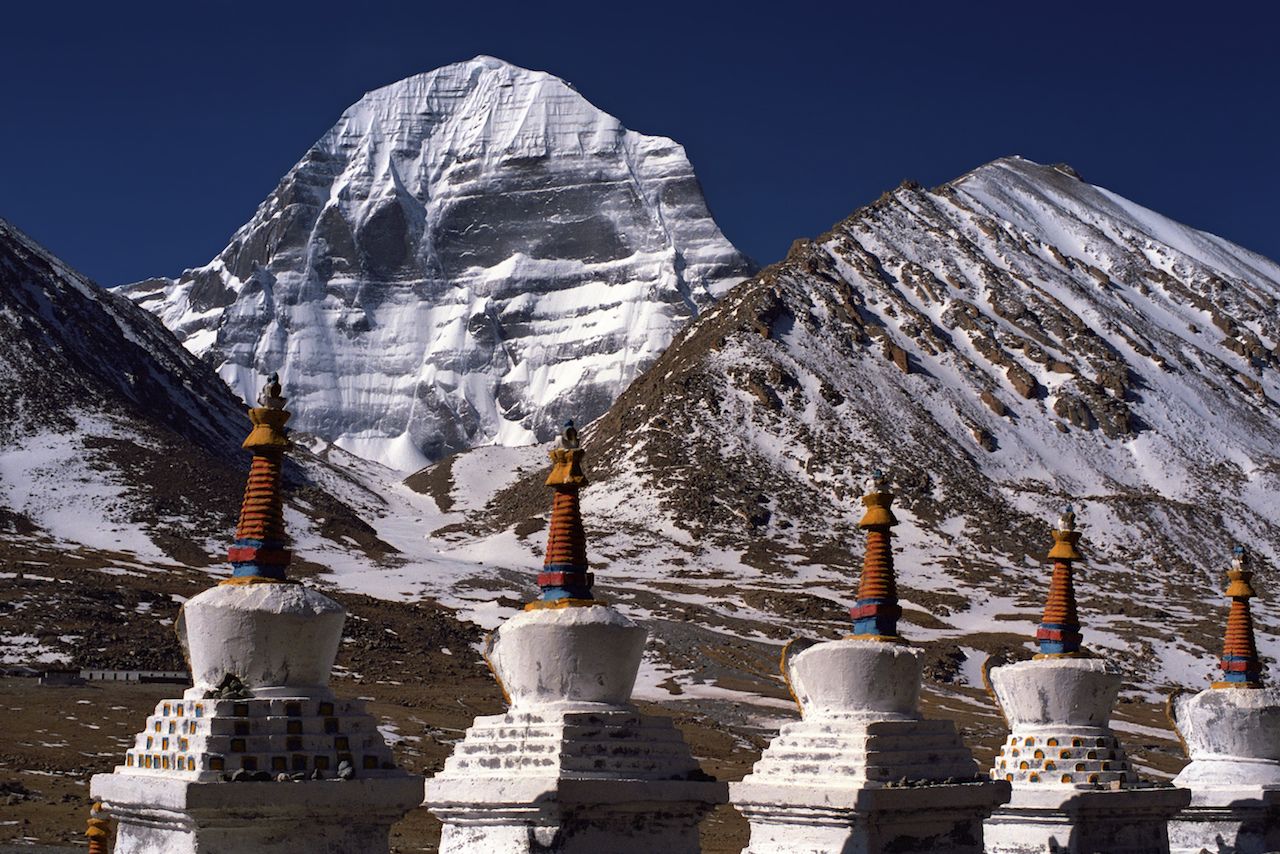 Sacred to four different religions, Mount Kailash is the focal point of one of the most well-known pilgrimages in the Eastern Hemisphere. Starting in the no-frills village of Darchen, the circuit — or kora — takes pilgrims past a barren turquoise lake, a glacial valley, and the famous Tarboche flagpole. Throughout the hike, you’ll be treated to breathtaking views of 21,778-foot Mount Kailash. While the acclimated Tibetans are able to complete the kora in a single day, it generally takes foreign pilgrims two to three days. Even though you’re not scaling the mountain itself, the route crosses mountain passes that are up to 18,470 feet high. Don’t underestimate the altitude. If you ever feel like giving up, which is a natural feeling for anyone on a pilgrimage, just look around and draw inspiration from your fellow pilgrims. Tibetan nomads save for years for the chance to make this journey — a fact more humbling than towering Mount Kailash itself.

No list of pilgrimages would be complete without mentioning the Camino de Santiago. While the Camino Francés, which starts on the French side of the Pyrenees before crossing into Spain, is by far the most popular route, it’s not your only option. If walking alongside 181,000 other pilgrims doesn’t sound like the spiritual journey you’re looking for, check out the lesser-known Camino del Norte. Perhaps the most difficult of all the Camino routes due to significant changes in elevation, the Camino del Norte runs parallel to Spain’s northern coast. Hilly terrain isn’t the only challenge for pilgrims, many of whom begin in San Sebastián. Unlike other Camino routes with frequent stopping points offering accommodation, albergues (pilgrim hostels) along the Camino del Norte are often 12 to almost 20 miles apart. Hopefully, the lush green countryside and views of the Atlantic Ocean on your way to Santiago de Compostela will distract you from your tired feet. Totaling 512 miles, the Camino del Norte takes around 37 days to walk in its entirety.

5. Via Francigena — England, France, and Italy 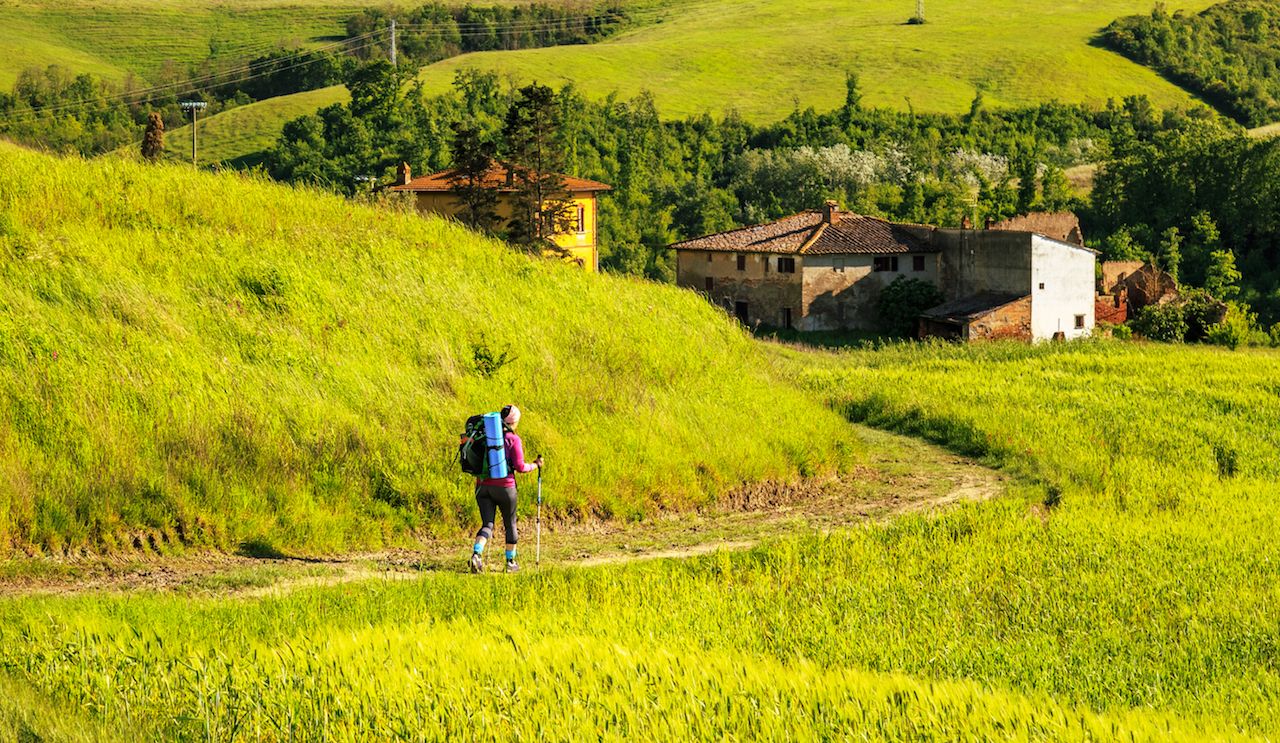 Are you a serious pilgrim? Follow in the footsteps of Sergic the Serious, the Archbishop of Canterbury in the late-10th century, and walk from England to Italy via France. Actually, he walked the reverse route, but modern-day pilgrims have popularized Canterbury as a starting point. An important pilgrimage route during the Middle Ages, the Via Francigena only gets around 1,200 visitors per year — many of whom only walk portion of the route at a time — making it the perfect path for pilgrims seeking solitude. Perhaps some people are deterred by the route’s lack of accommodation. If you decide to walk this pilgrimage path, know you’ll need to camp at least part of the time. But roughing it while surrounded by the beauty of Tuscany and the Alps doesn’t seem too rough. To recreate the full length of Sergic’s journey, plan on at least 80 stages, which average out to a little under 13 miles per day, totalling nearly 1,100 miles. 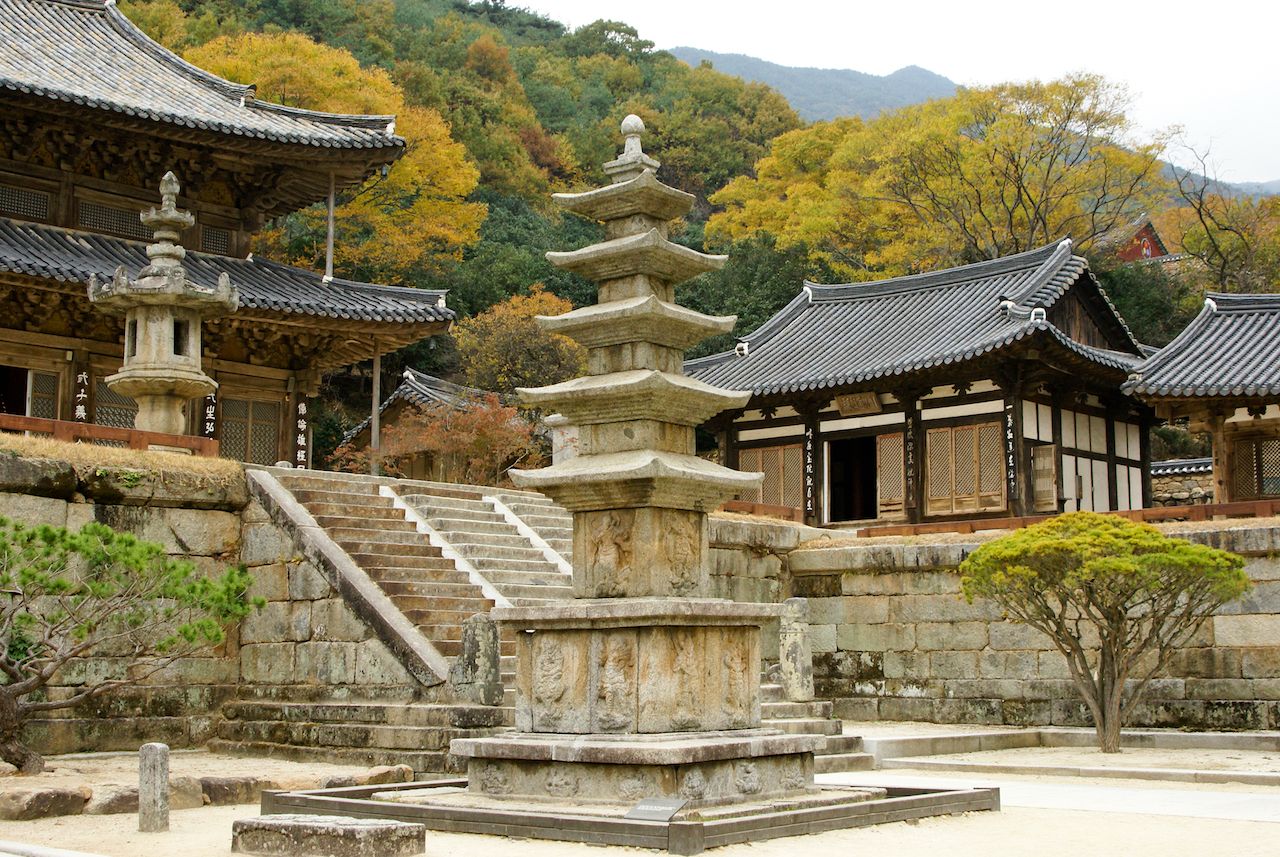 Journey to the Korean Peninsula and experience the ancient tradition of mountain spirit worship. While a handful of intrepid hikers have gathered up the required visa paperwork and guts to walk the North Korean portion, we’d forgive you for sticking to the South Korean section, which stretches 460 miles through the country’s highest peaks and along all the major rivers. As you walk, you’ll encounter trail-side shrines and temples honoring Buddhism, Taoism, Shamanism, and neo-Confucianism. Your endurance and strength will be put to the test when the route leads you to the summit of Jirisan, mainland South Korea’s tallest mountain. At the Hwaeomsa Temple on Jirisan, Buddhist monks invite pilgrims to join them for pre-dawn chanting and dharma drumming. If you decide to tackle the whole trail, which runs almost the entire length of the peninsula from South Korea to the North Korean border with China, it will take you two months.

7. The Abraham Path — The Middle East 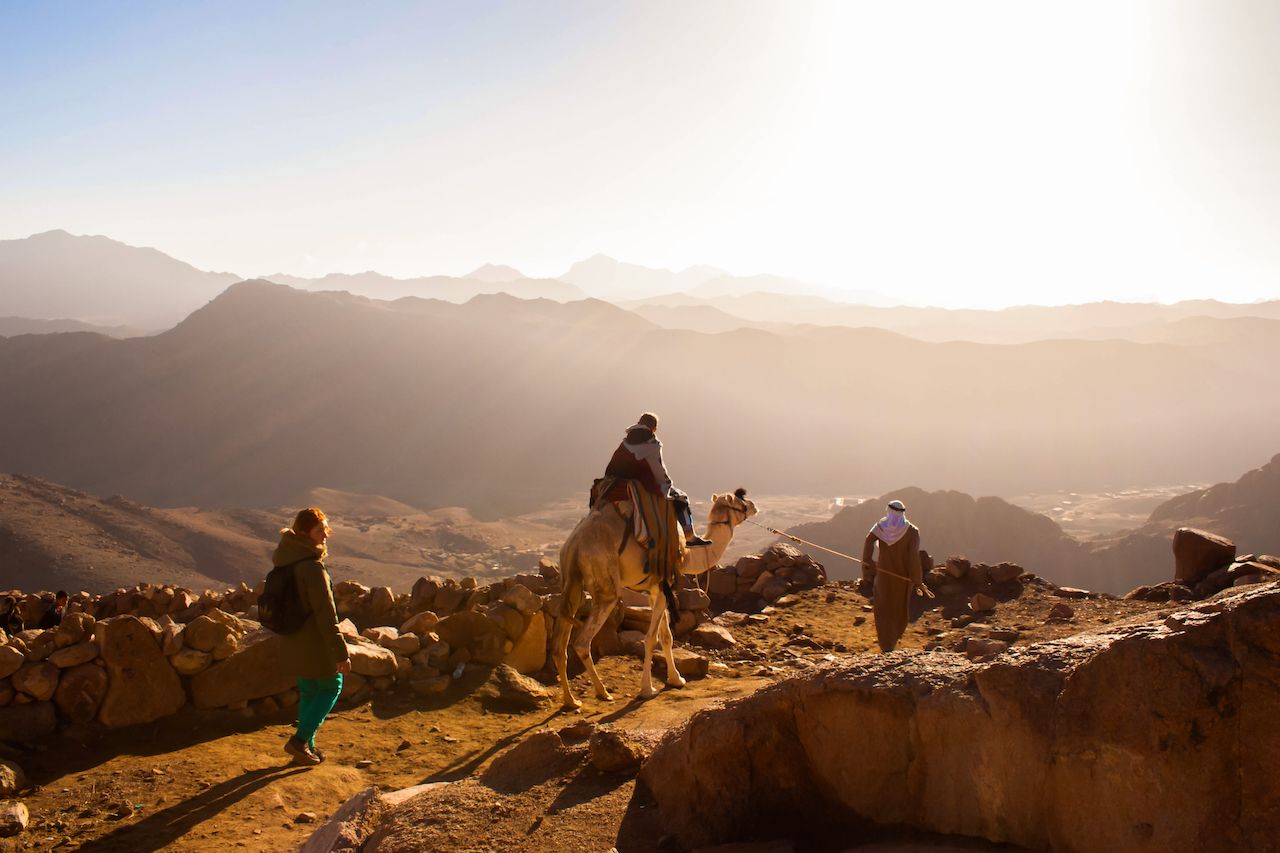 It may be one of the newer pilgrimages on the scene, but the Abraham Path — which winds through Turkey, Egypt, Palestine, Israel, and Jordan — deserves a place on this list for its mission to show hospitality to strangers in honor of its namesake. The first group of pilgrims walked from Urfa to Hebron in 2006. Their journey retraced the travels of Abraham, who is considered a prophet in Judaism, Christianity, and Islam. In the years since, more than 20,000 people have walked along the Abraham Path. Today, the routes throughout the Middle East total 1,200 miles, and the Abraham Path Initiative plans to expand these in the future. Most pilgrims walk only one section of the path at a time, taking anywhere from two days to two weeks. Also, as the path is still under development, many pilgrims opt to join tours in order to better navigate the less-populated stretches.

Hiking7 Epic Long Walks in the UK You Can Plan Yourself
Tagged
Backpacking Hiking Religion Insider Guides
What did you think of this story?
Meh
Good
Awesome