The moment you step into Area15 Las Vegas, you’ll feel as though you’ve departed Earth for another world. The lobby looks like a spaceship, from which doors open to the cavernous main floor of Area15 — dark except for blobs of neon green, purple, and blue lights. In the middle of space stands an artificial tree, decorated with purple, magenta, and electric blue light up leaves. This is the room where your Area15 adventure begins.

The vast entertainment complex offers interactive and immersive art exhibits, trippy light shows, and virtual reality simulators, alongside more traditional gaming options like golf and axe throwing. Almost every aspect of Area15 is family-friendly, but there’s a distinct raver vibe to the experience, from the psychedelic light show bouncing off the walls to the many experiences within Area15 that favor mind-bending combinations of color, music, and lights.

There is so much to do in Area15 that planning your visit might feel like an overwhelming task. So we decided to tour Area15 ourselves, experiencing the art exhibits in person, to figure out if the much-hyped carnival of the senses is really worth a visit. Here’s everything you need to plan your visit to Area15 Las Vegas, from what exhibits to see to how to get tickets. 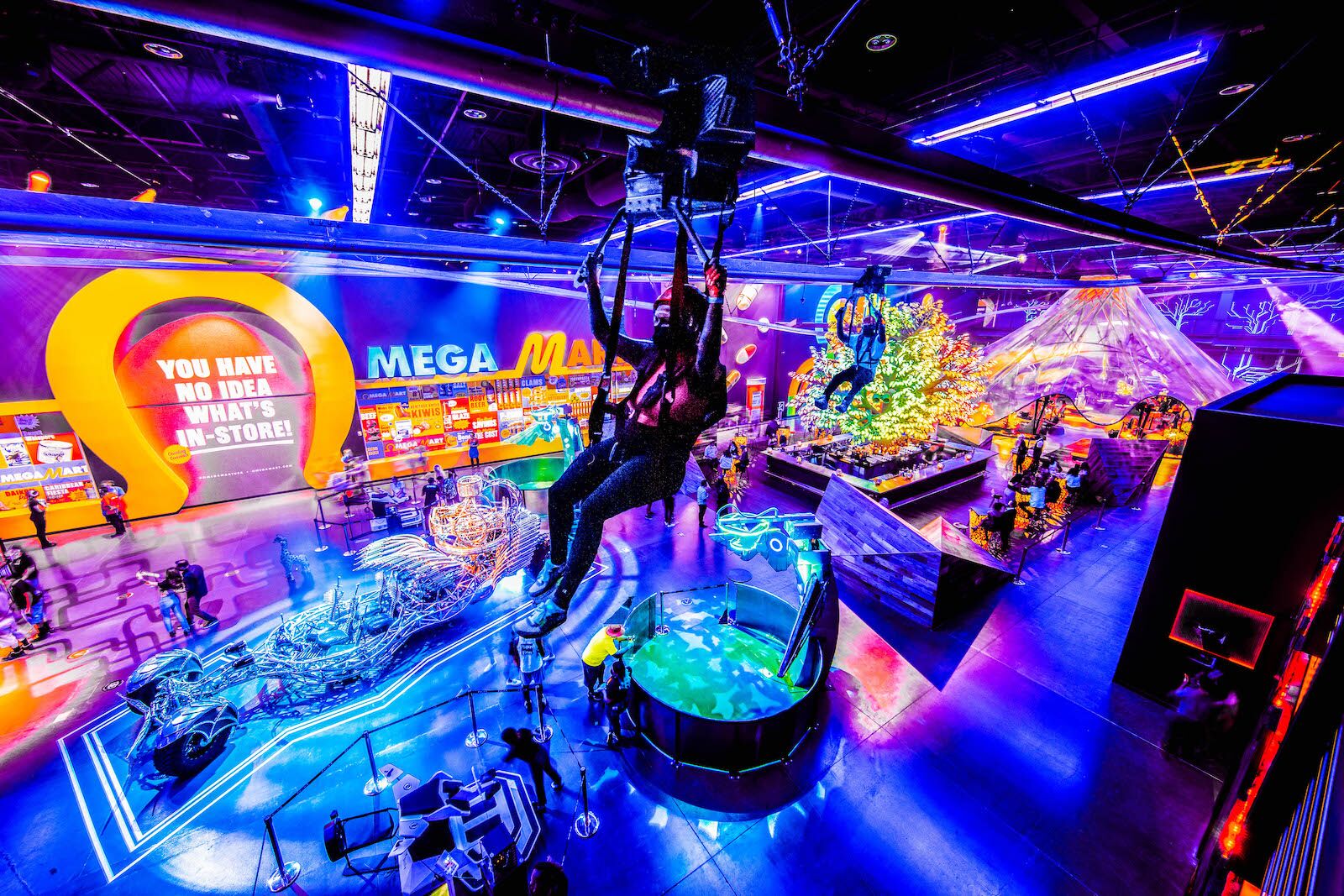 Area15 bills itself as an “immersive playground,” and there are certainly many opportunities for play and adventure here. Area15 is a two-story complex that hosts a series of interactive activities. The most exciting aspect of Area15 are the art exhibits created by a series of artists, including Chris Wink, one of the co-founders of The Blue Man Group, and Vegas entertainment company Meow Wolf.

Area15 functions like a mash-up between a futuristic carnival or theme park (without the roller coasters) and a museum. It’s focused on interactivity — art that visitors can see, touch, and more or less be part of. The emphasis is on multimedia artwork that integrates not just visual elements but also objects, music, and narration. In many cases, guests are encouraged to not just sit and look at the artwork, but to explore the exhibits.

Especially on a day when Area15 isn’t crowded, the main floor might sparse — there’s little more than a cocktail bar under a canopy, a few benches, seats molded into the shape of rocks, and then entrance to Omega Mart on the left side of the building, among a few other shops and a restaurant. But this atmosphere of relative calm is deceptive. Each doorway in the complex leads to room that will take you on a surreal journey to feed and challenge your imagination.

How to get Area15 tickets

Passes to Area15 are free. It’s best to claim a pass online before you arrive so you can bypass any lines of people that didn’t plan ahead.

That’s where the free ride ends, though. All the exhibits within Area15 have an entry fee, and sometimes it’s steep (for instance, Omega Mart costs $49 for adults and $45 for kids). That’s another reason it’s smart to plan your trip to Area15 ahead of time: While it’s theoretically easy enough to sit on one of the many benches on the main floor and purchase tickets to the exhibits you want to see (which is what I did because I had no idea what to expect when I walked into Area15), most of the tickets have a timed entry. So if you plan your schedule in advance and buy the tickets online, you could potentially plan out an entire three-hour adventure inside the complex, seamlessly bouncing from one exhibit to the next.

Area15 also offers family passes for two adults and two kids that allows access to select experiences. Kids are welcome until 10:00 PM, after which Area15 becomes a 21-and-older venue. If you’re eager to avoid crowds, the best time to visit Area15 is mid-afternoon on a weekday. That may be a tough sell for families, but it’s the safest way to avoid contact with strangers and have as much space to yourself as possible.

What do in Area15 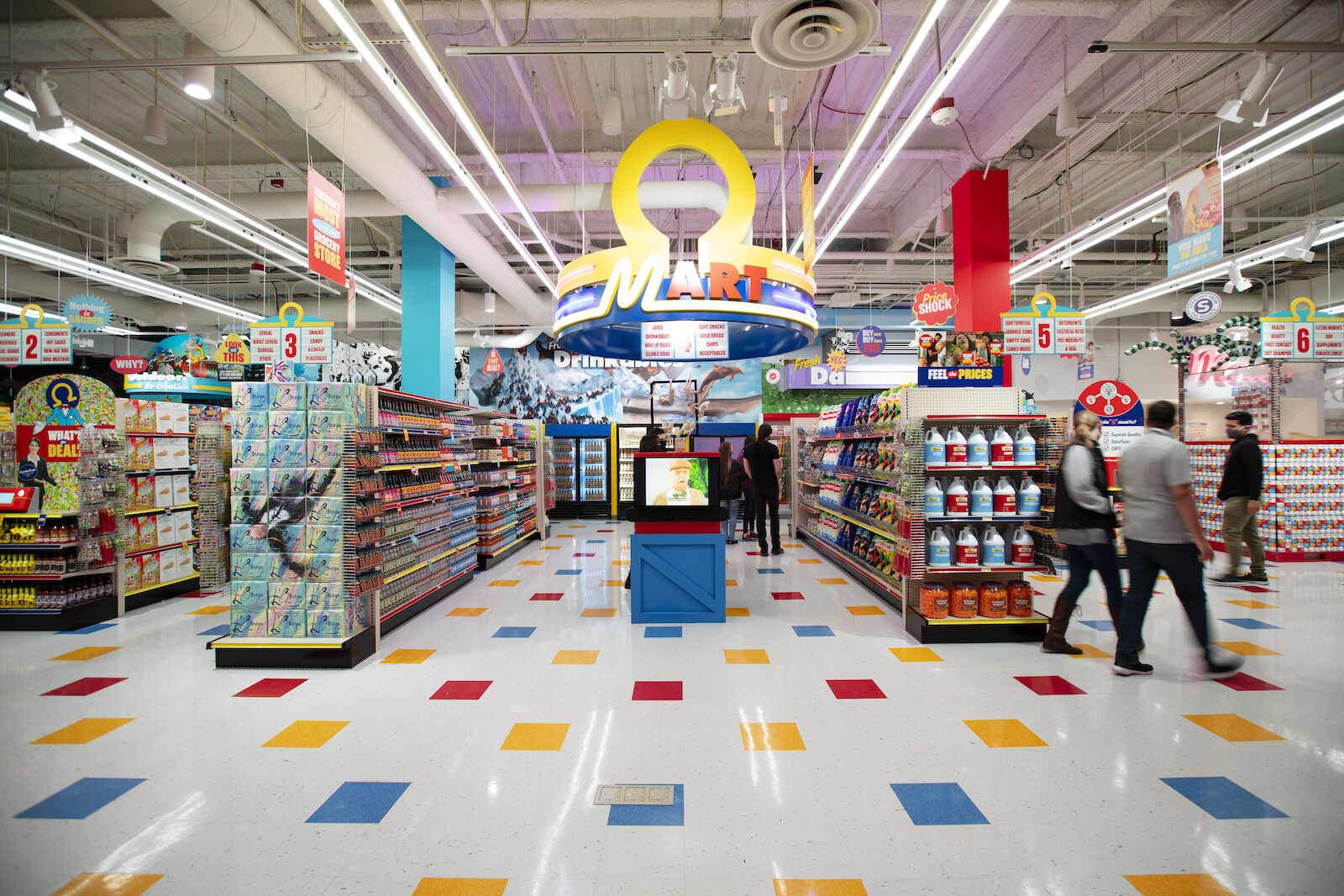 The most effective way to plan what certainly will be the first of many trips to Area15 is to head to the website and decide which exhibits you want to see most to ensure you don’t miss anything. Area15 is home to around 14 so-called experiences on permanent display, a cocktail bar called Oddwood, and The Beast, which is a restaurant run by James-Beard award-winning chef Todd English. on top of an ongoing series of events that includes immersive Van Gogh and Klimt art exhibits, concerts, and a silent disco. There’s even a zipline called Haley’s Comet that slingshots riders around the inner perimeter of the building.

The biggest draw to Area15, however, is probably Omega Mart, a massive art installation created by Meow Wolf, a production company that specializes in interactive art work. At first glance, Omega Mart looks like a grocery store from a mirror universe: There are cereal boxes with slogans like “Simply Does Not Contain Spiders,” lemon-lavender canned beverages called Gender Fluid, and liters of shrimp-flavored blue liquid that supposedly expires 18 minutes after being opened. It’s all for sale. 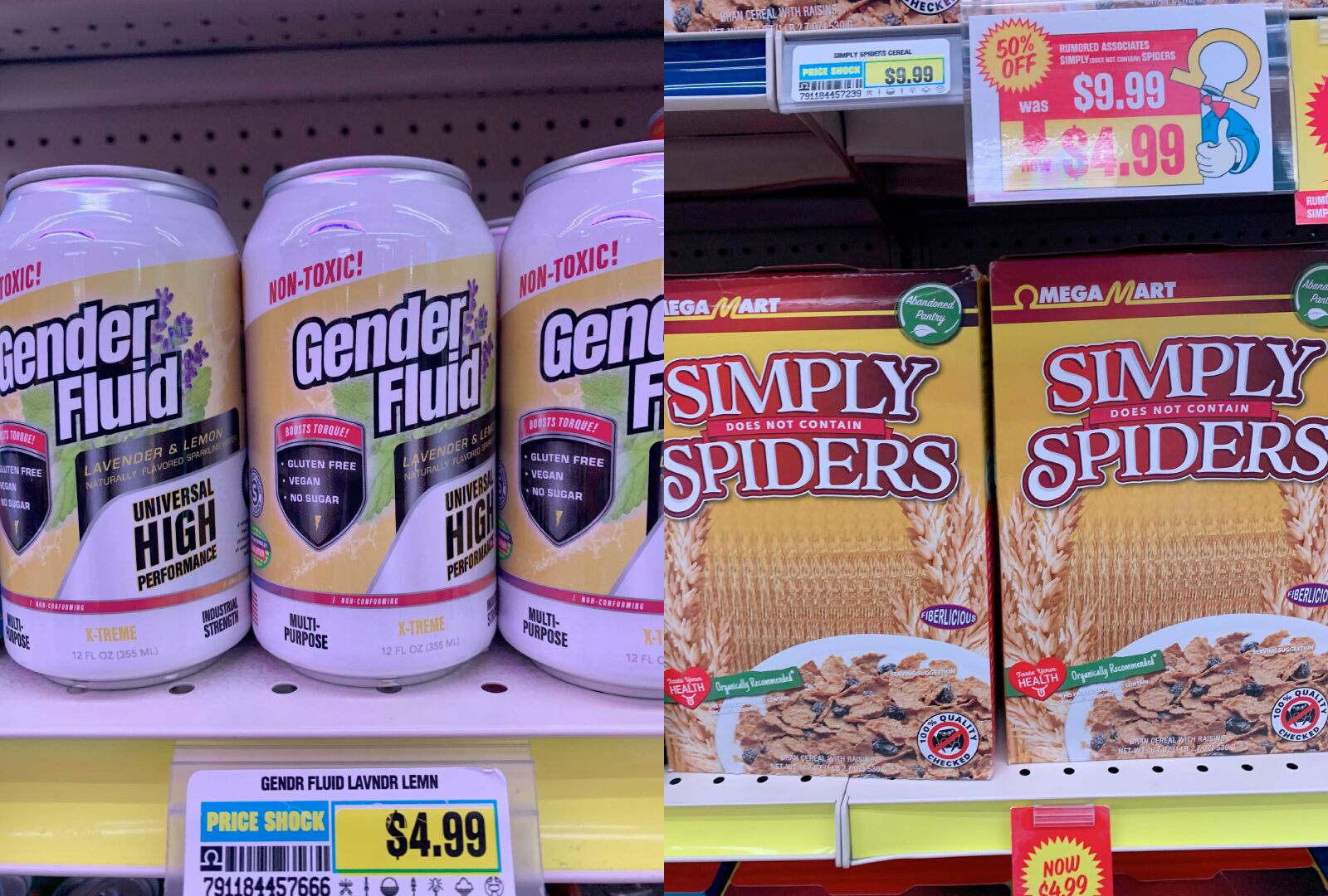 The grocery store aspect is just the opening act to this frankly mind-boggling experience, though. There are hidden door ways throughout the store that serve as portals to different layers of Omega Mart. For instance, you can walk upstairs to a corridor that leads to more doorways (some of which lead to interactive sound machines) until you reach a twisting, MC Escher-esque jungle gym. Or you can walk through a mock refrigerator case holding soda only to find yourself immersed in what looks like an abandoned village, complete with a science lab and cozy huts. There is a narrative to follow in the chaotic maze that is Omega Mart, but visitors can also wander aimlessly through the installation, absorbing the interactive artwork. 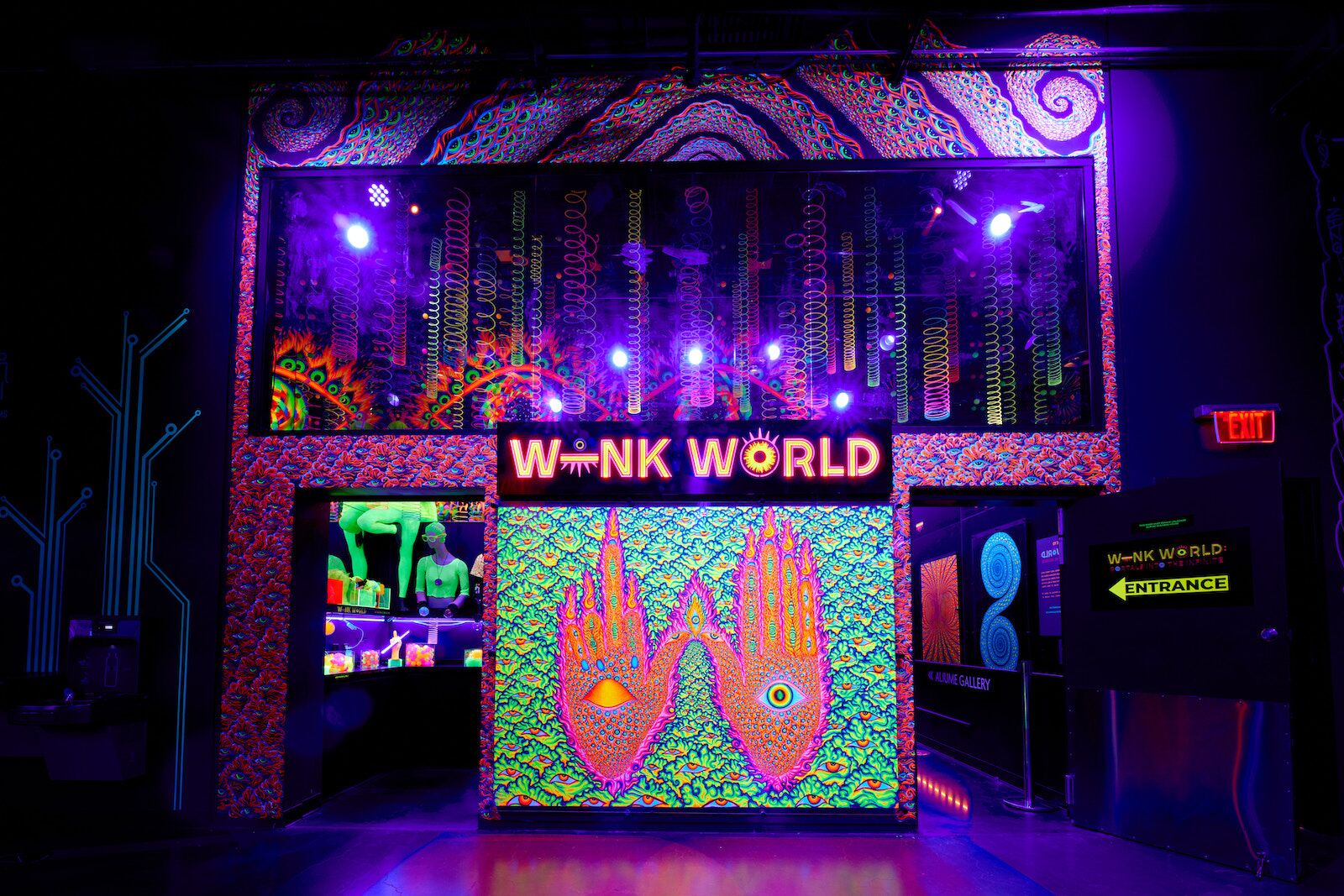 Wink World is a much simpler though equally enjoyable experience with a similarly psychedelic tone. The installation consists of six mirrored infinity rooms, each one containing a timed, strobing light show brought to life by objects like slinkies and ribbons. Speakers blast dubstep music and narration ruminating on how the human brains perceive the concept of infinity plays over the hypnotic combination of light and motion — giving it a certain acid-tripping hippie flavor — but it’s entertaining and mesmerizing without any illegal substances needed.

One more light show you might consider visiting, especially if you have kids in tow, is Museum Fiasco, a single concrete room featuring columns outfitted with panels that project colorful fluorescent patterns of light as pulsating dubstep plays in the background. The light show is 12 minutes long and leans into the narrative that Area15 is a spacecraft to another world. Before the music starts, an audio track explains that you’re about to embark on an exploration of an alien world. Creepy sound effects meant to intimate an otherworldly visitor play throughout the show and the room frequently flashes back and forth from brightly lit to pitch black, which makes for a disturbing experience that I couldn’t wait to escape — though I could see how an alien-obsessed kid could find the whole show deliciously frightening.

These Las Vegas Airbnbs offer the best Vegas experience on and off the strip
Tagged
Culture Entertainment Events Museums Las Vegas, NV, United States
What did you think of this story?
Meh
Good
Awesome