In the United States, we’re used to being able to get pretty much whatever we want, whenever we want it. Think about the last time your WiFi went out when you were trying to cue up Netflix, and you’ll know exactly what I mean.

Which is why this past week, in the wake of the coronavirus outbreak, was especially unnerving for a lot of people, who went to the store to pick up a few items they can usually find on-demand and found literally none of what they were looking for.

Not just toilet paper and hand sanitizer, either. Entire produce, dairy, meat, and bread sections — and especially the packaged food and frozen aisles — have been ravaged too. While certain areas might just be faced with having to settle for buying a bag of frozen breakfast potatoes when you’d been looking for whole russets, others are staring down rows upon rows of empty shelves — which can be pretty panic-inducing. 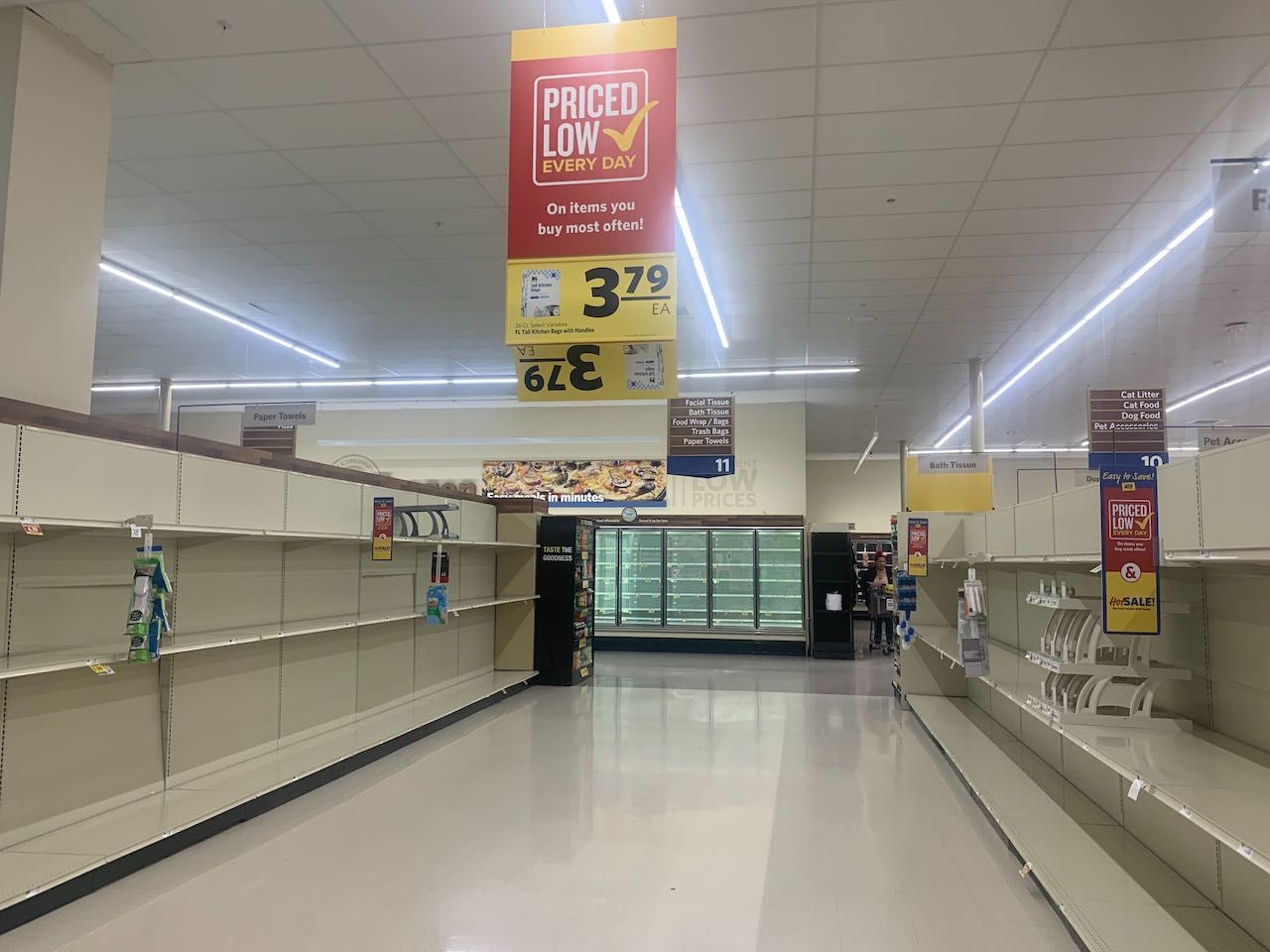 But this isn’t the case for all grocery stores. When I posted on Facebook about my inability to find onions at my neighborhood Publix, a Chinese-American friend in Seattle messaged me saying, “Try your local Chinese market,” he said. “They’ve got so much stuff there. You’ll love it.”

So in an effort to find onions, and offer support to people who have most unfairly received the brunt of racist boycotting, I headed out to some Asian markets around Miami to do my grocery shopping for life under quarantine.

Opening up your world of flavors 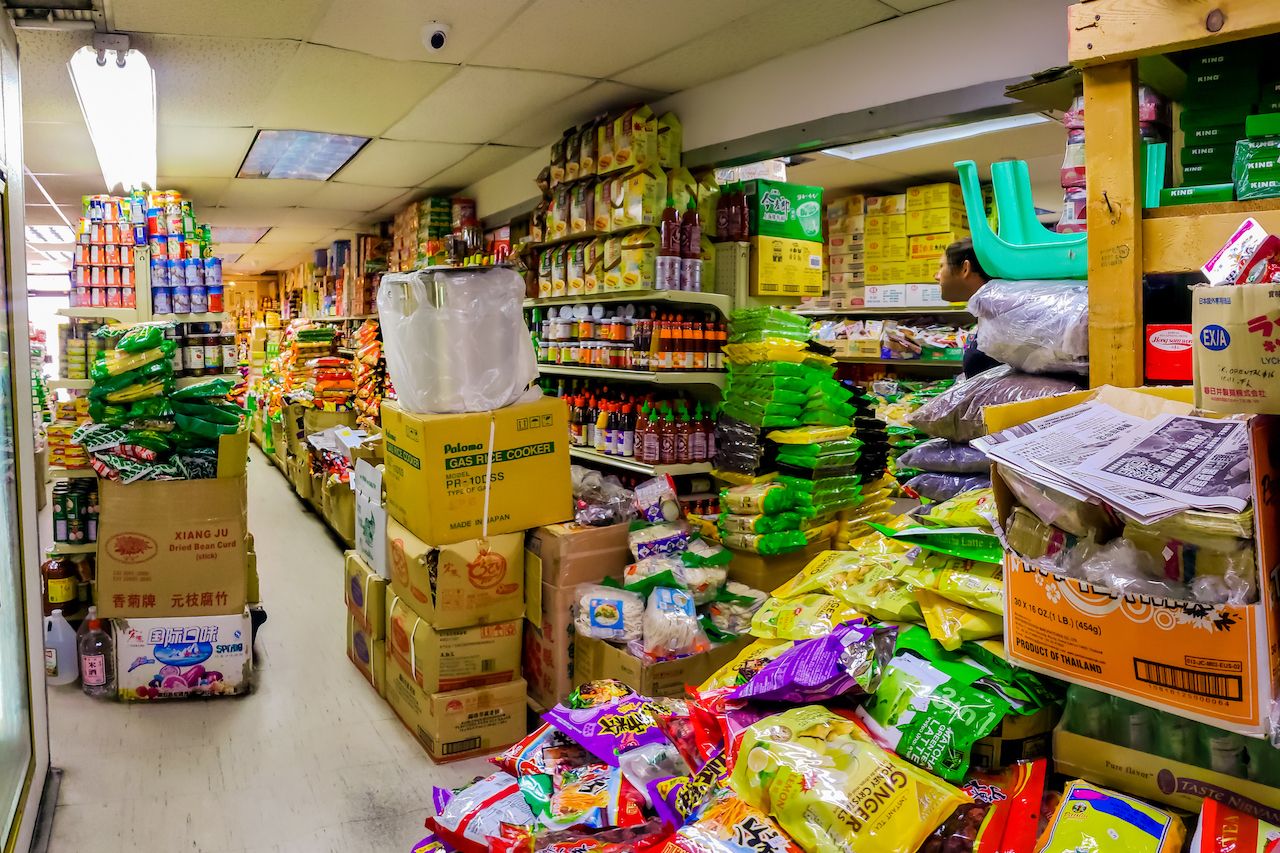 My first stop was TK Chinese Groceries, about halfway between Little Havana and the Everglades on US-41. I walked in and was greeted by the antithesis of the barren shelves I’d seen at Publix, with items literally spilling into the aisles ready for stockpiling. Maybe not filled with toilet paper but with a bounty of food.

There were 30-pound bags of sushi rice and multi-gallon containers of chili sauce. The frozen foods section was filled with fish cakes and shrimp shumai, gyoza and wontons. It was effectively the same stuff I’d be paying a premium to have delivered on UberEats, right there in the frozen food section.

Unlike the pasta aisle at Publix, the noodle section was filled with varieties of rice, buckwheat, egg, and high-quality ramen noodles. There were cans of quail eggs and vacuum-sealed shiitake mushrooms. I found nine different types of curry powder, each one enticing me to try a new recipe when I got home.

They did not, however, have onions — or at least the type I was looking for.

Stockpiling for a quarantine 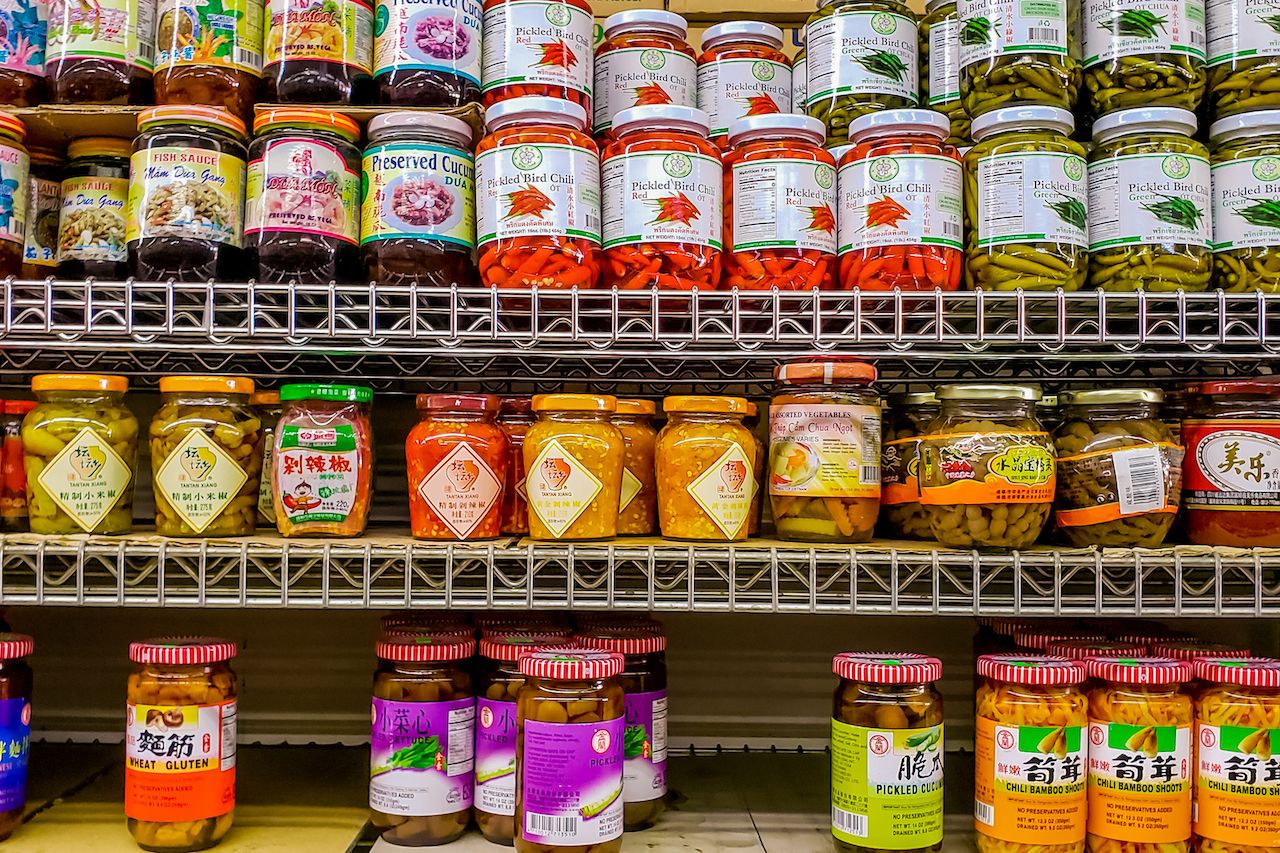 I pushed on to a couple more Asian markets in Miami’s western suburbs. The next stop was the PK Oriental Mart which was overflowing with produce. But, unlike the produce left out at the average supermarket for any nefarious teenager to sneeze on, the vegetables here were each individually wrapped in plastic. Which I might have seen as wasteful three weeks ago but now saw as the safest produce in South Florida. 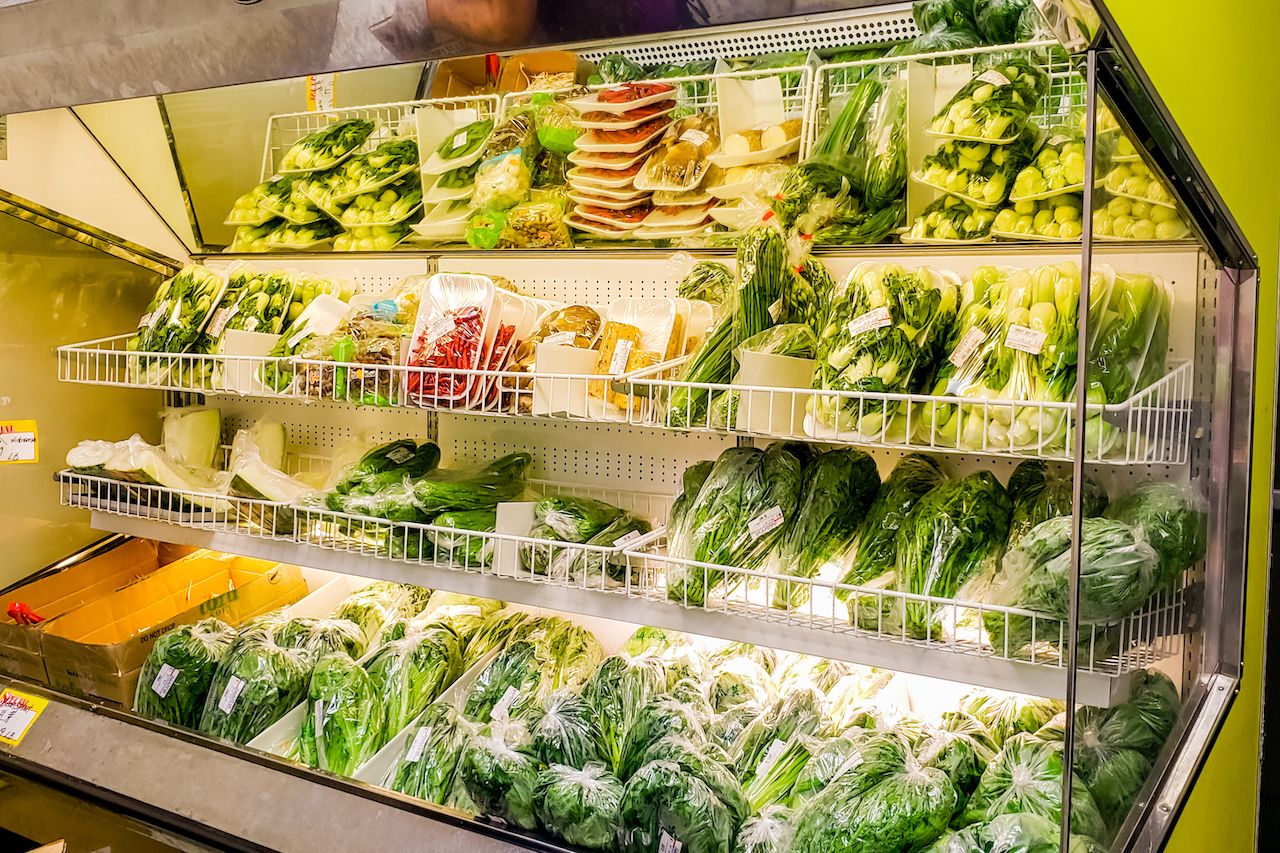 What also struck me about the Asian markets was that nearly everything on the shelves was stuff that would last in a bunker. At the Lucky Oriental Mart, I found shelves upon shelves of pickled vegetables. I also found dehydrated meats and noodles, rice, and even dried scallops and sea cucumber. Sure, they cost $162 a pound, but if I wanted a stash of Japanese sea scallops to last me through the apocalypse, I knew where to find them.

Granted, I’m not necessarily sure how to use every product or if I’m going to like them. But there’s never been a better time to give new things a try and spend some time digging into new recipes and cooking techniques. If you can’t use these exceptional times to try something out of your comfort zone, you’re wasting a great opportunity. 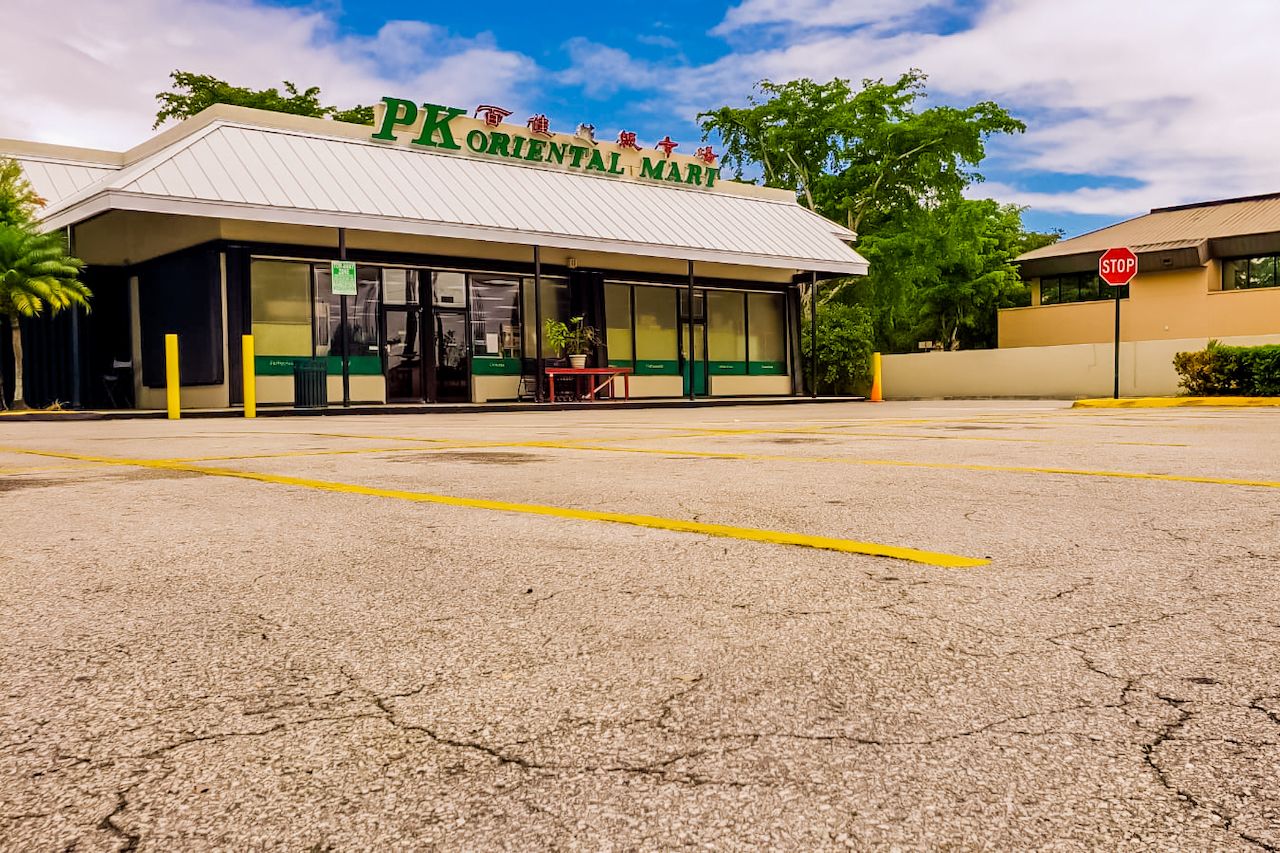 With business slow everywhere, it becomes doubly important to shop at independent stores like these. With the racist scrutiny many Asian people are facing during the coronavirus crisis, it’s triply important to support these stores that are being entirely overlooked.

While I’m certainly a great cheerleader for Publix (as every Floridian is required to be) I also recognize that it is a large company whose profitability is fairly guaranteed. Small Asian markets, on the other hand, are typically run by families who might be hardest-hit when the economy goes south. And buying your groceries there will do a lot more to help the local economy than shopping at a chain.

I returned home with some tea, a new set of forks (Asian groceries have every kitchen item you can imagine), three jars of pickled veggies, an armload of noodles, bagged lettuce, and a bottle of pork liver sauce that I’m looking forward to figuring out how to use.

Though I never did find the exact onions I was looking for, I was able to grab some scallions. More importantly, I used this time to open my own worldview to a realm of delicious ingredients, and shelf-stable food, that has always existed and will exist long after the current crisis has resolved. Shopping at Asian grocery stores may not replace my daily walks to Publix, but they will be at the forefront of my mind when I’m looking to mix it up, support local, independent businesses, and — for the foreseeable future — stock up while social distancing.

Food + DrinkTo truly understand a country, go to the grocery store
Tagged
Food + Drink COVID-19
What did you think of this story?
Meh
Good
Awesome