In 1999, Georgia Tech graduate student Ryan Gravel had a vision for a pedestrian-friendly Atlanta: miles of public-use trails, transit, and green spaces to connect and protect the city’s historic neighborhoods. Ten years later, his vision became a reality in the making, and today, it’s a leading model for the future of America’s urban green spaces. It’s called the BeltLine, and it’s transforming Georgia’s capital from a motor city to a bipedal Elysium. The BeltLine’s first completed section is the Eastside Trail, and no trip to ATL is complete without spending at least a half-day exploring it. Here’s how.

The Eastside Trail — where you should begin your BeltLine exploration 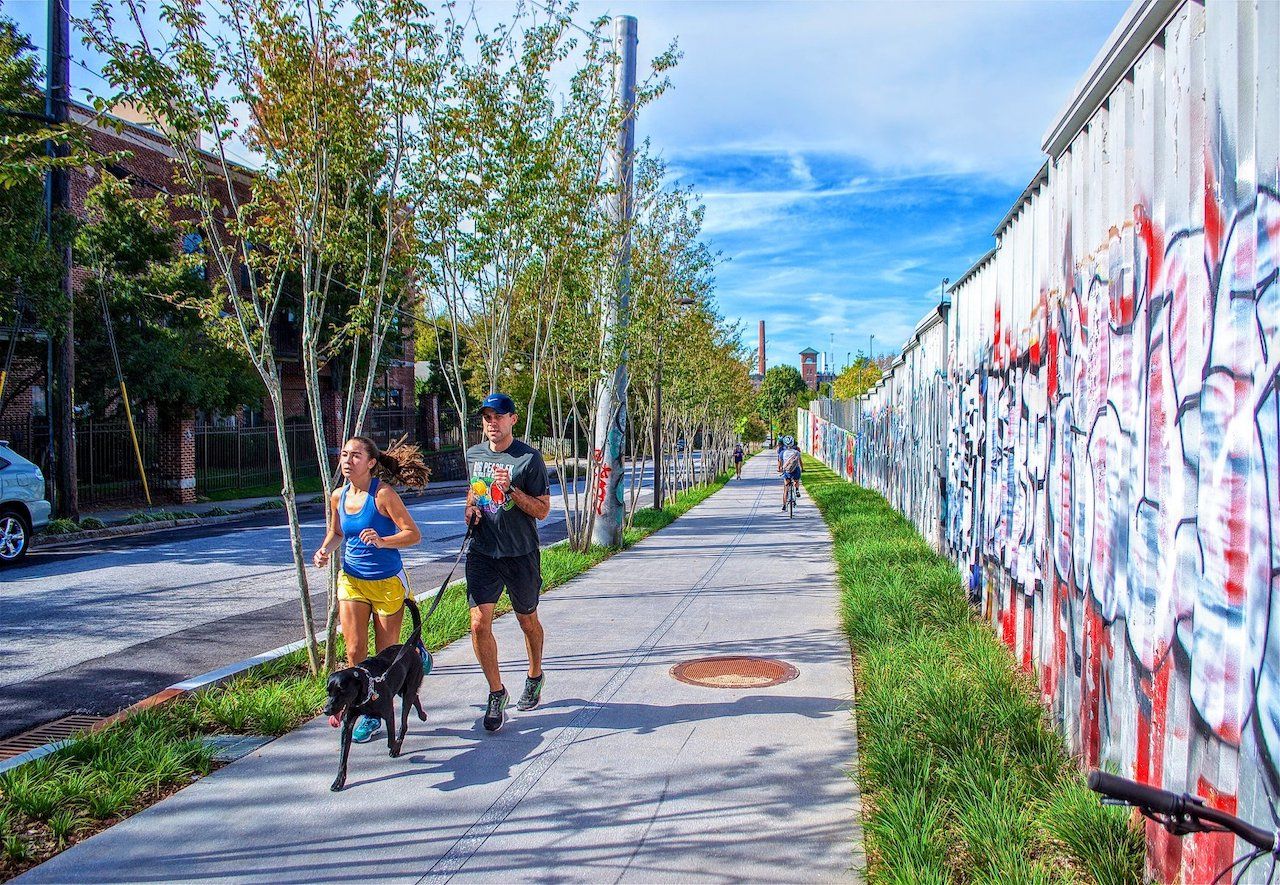 The BeltLine is an outdoor urban playground that will eventually encompass 33 miles of trails for fuel-free playtime. Visitors will be able to bike, walk, or run through town on old rail lines converted into paths that connect 45 neighborhoods along 2,000 acres of public parks.

Luckily, you don’t have to wait to enjoy this metropolitan magic. The Eastside Trail, the first finished section of the BeltLine, is open and ready to be explored. This three-mile stretch runs from Piedmont Park, through the Historic Fourth Ward, past Inman Park, and ends at Memorial Drive in Reynoldstown. It passes world-class food markets, shopping centers, beer halls, and free outdoor murals.

Head to the intersection of 10 Street Northeast and Monroe Drive at Piedmont Park. For those looking to rent bikes, you can join the city’s bikeshare program, Relay Bike Share, and pay $3.50 per 30-minute ride; there’s a bike dock located at there. Or you can rent one from Skate Escape, located on the other side of the park. The trail is equally suitable for walking, and has a fantastic running path for those so inclined. Download a map of the trail before heading out. 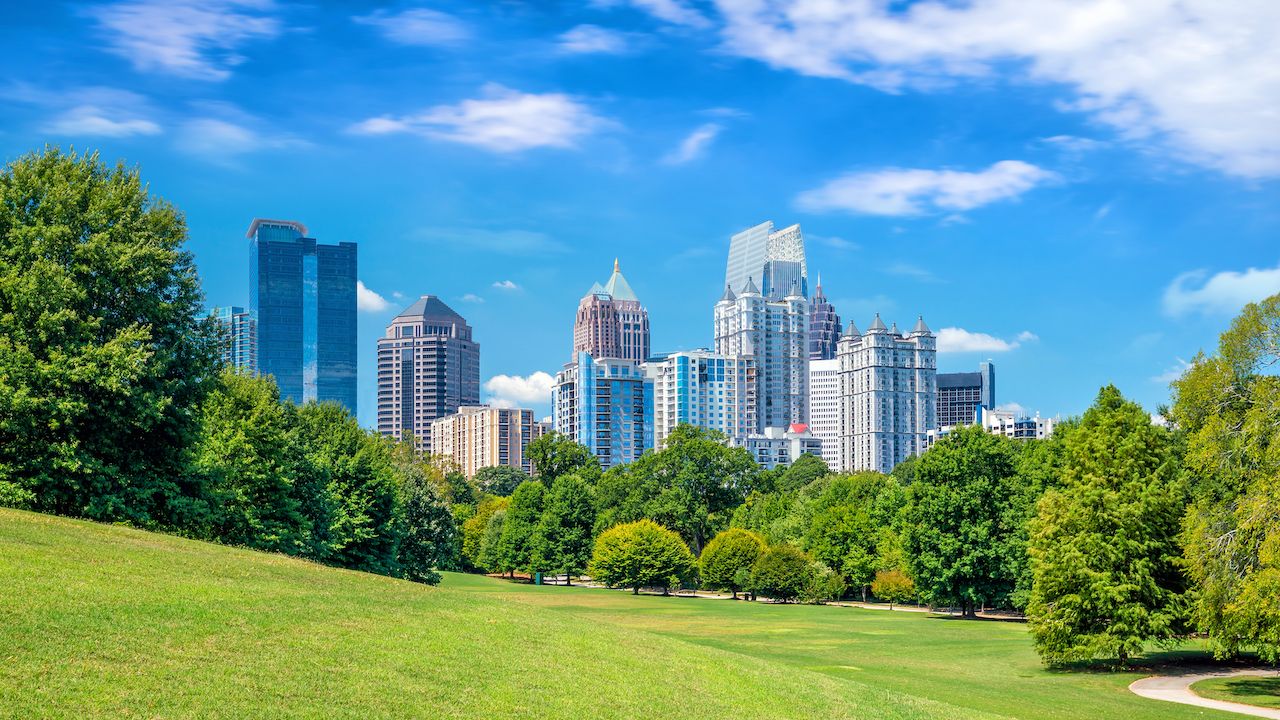 The 189 acres of rolling green hills that unfurl from Midtown’s steely skyscrapers and lead to the Eastside Trail were designed by the sons of Frank Law Olmsted, the architect of New York’s Central Park. Their father’s influence is evident, as the park’s winding walkways and open fields are similar to Olmsted Sr.’s most famous works. Walking through the park and taking in the Midtown skyline from Lake Clara Meer is a peaceful way to begin the day.

Peruse free art along the BeltLine. 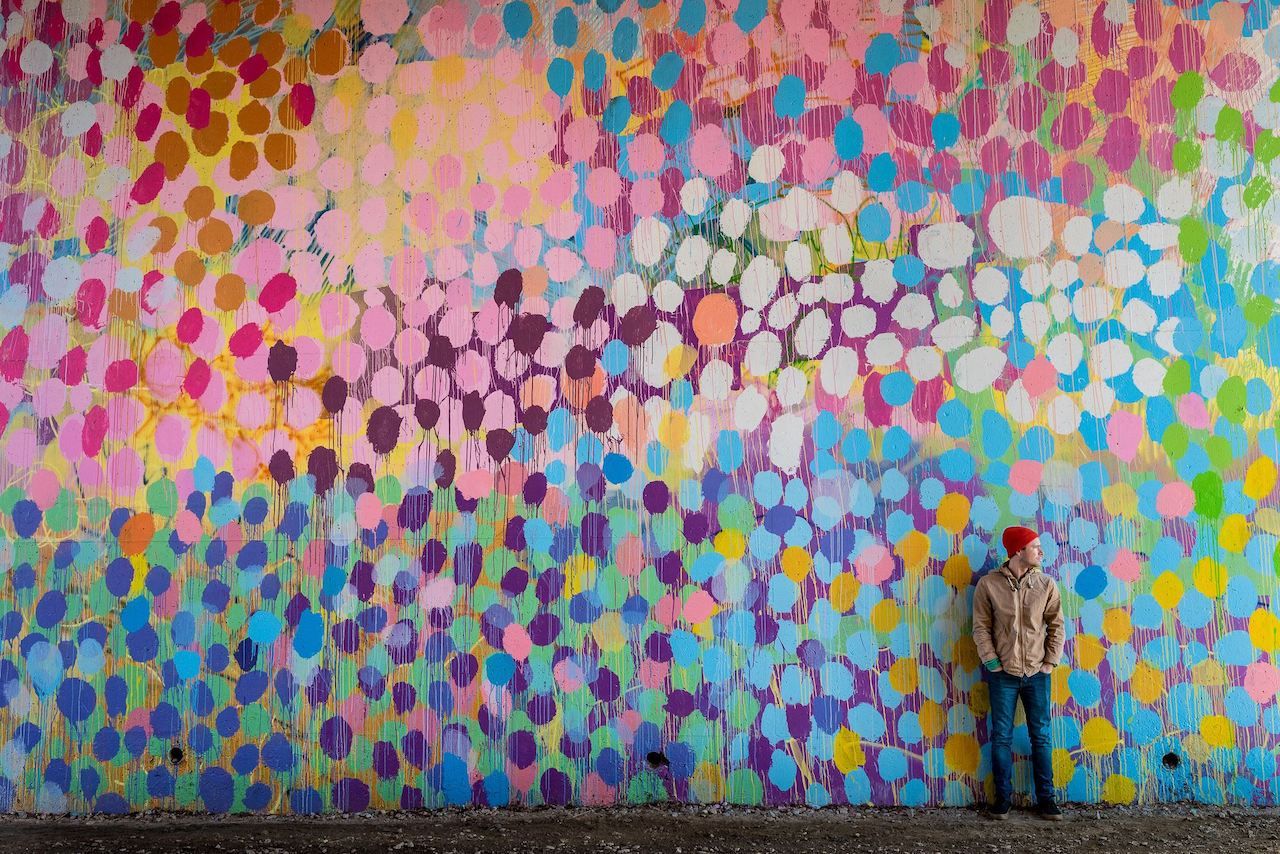 Once you enter the Eastside Trail, you’ll immediately come to a bridge with pastel-painted street art by HENSE (aka Alex Brewer). Almost every bridge along the BeltLine is a gallery unto itself decorated by world-renowned muralists. Greg Mike, an Atlanta-based artist famous for his royal-blue LoudMouf character, has several pieces visible from the path. Kyle Brooks, who grew up in Atlanta, painted a bridge farther down the trail into a hard-to-miss cotton-candy world of cartoon faces. Perhaps the most eye-popping mural is by Detroit artist Ouizi, who turned the backside of Paris on Ponce, a store that sells art and antiques, into a garden of flowers painted one-story high.

It’s the easy-to-miss work of Karen Anderson, founder of Tiny Doors ATL, that has garnered the greatest critical praise in recent years, however. Anderson creates whimsical interactive worlds by placing seven-inch doors, decorated to match their respective neighborhoods, in amusing locations throughout Atlanta. There are currently four on or near the Eastside Trail. The first is within HENSE’s mural, the second near the bottom of Ouizi’s floral piece, a bridge near the Historic Fourth Ward Skatepark is home to a third, and the final door is at the entrance to Krog Street Tunnel.

Krog Street Tunnel, which links the neighborhoods of Inman Park, Cabbagetown, and Reynoldstown, is a gritty graffiti sanctuary. The wall-scrawled walkway is a popular photo-op for snap-happy tourists near the end of the trail, and worthy of a visit.

Pig out at Ponce City Market. 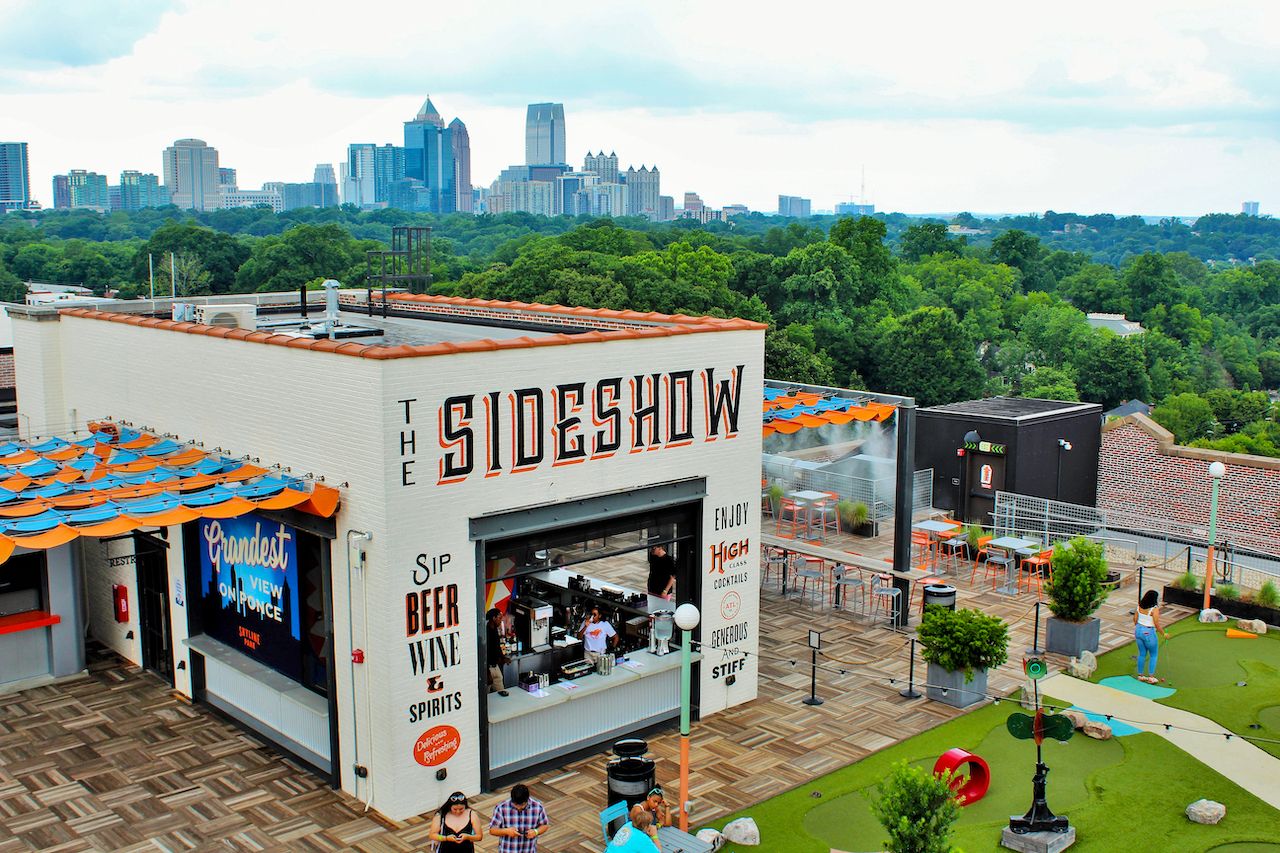 Exploring the BeltLine can quickly turn into a full-day ordeal, but not because of the art, mind you. The Eastside Trail abuts two of Atlanta’s most acclaimed food and shopping markets, located under two miles of one another. Ponce City Market is the first you’ll come across. Initially built in 1926 for Sears, Roebuck and Company, the Historic Fourth Ward complex was reimagined as a multipurpose hotspot for work and pleasure in 2014. The largest adaptive-reuse project ever to hit the Big Peach, the market has played a significant role in the city’s urban renaissance.

Once inside, be sure to check out Central Food Hall, where you can graze on sweet and savory snacks, sip on local spirits, and treat yourself to lunch or dinner at one of the many sit-down restaurants. Trendy clothing and home goods stores pepper the first two floors, and there’s plenty of public seating if you’re just looking to hang with friends. Head up to Skyline Park, an amusement-style playground on the market’s rooftop, to play retro carnival games and take in some spectacular city views. It’s worth spending a couple of hours discovering these treasures yourself, and not a terrible idea to plan a visit during the week. Ponce is perpetually packed both Saturday and Sunday, and the din of people humming about local food purveyors makes the cement walls of the market sing.

Grab a beer at Krog Street Market before heading out on the food hunt. 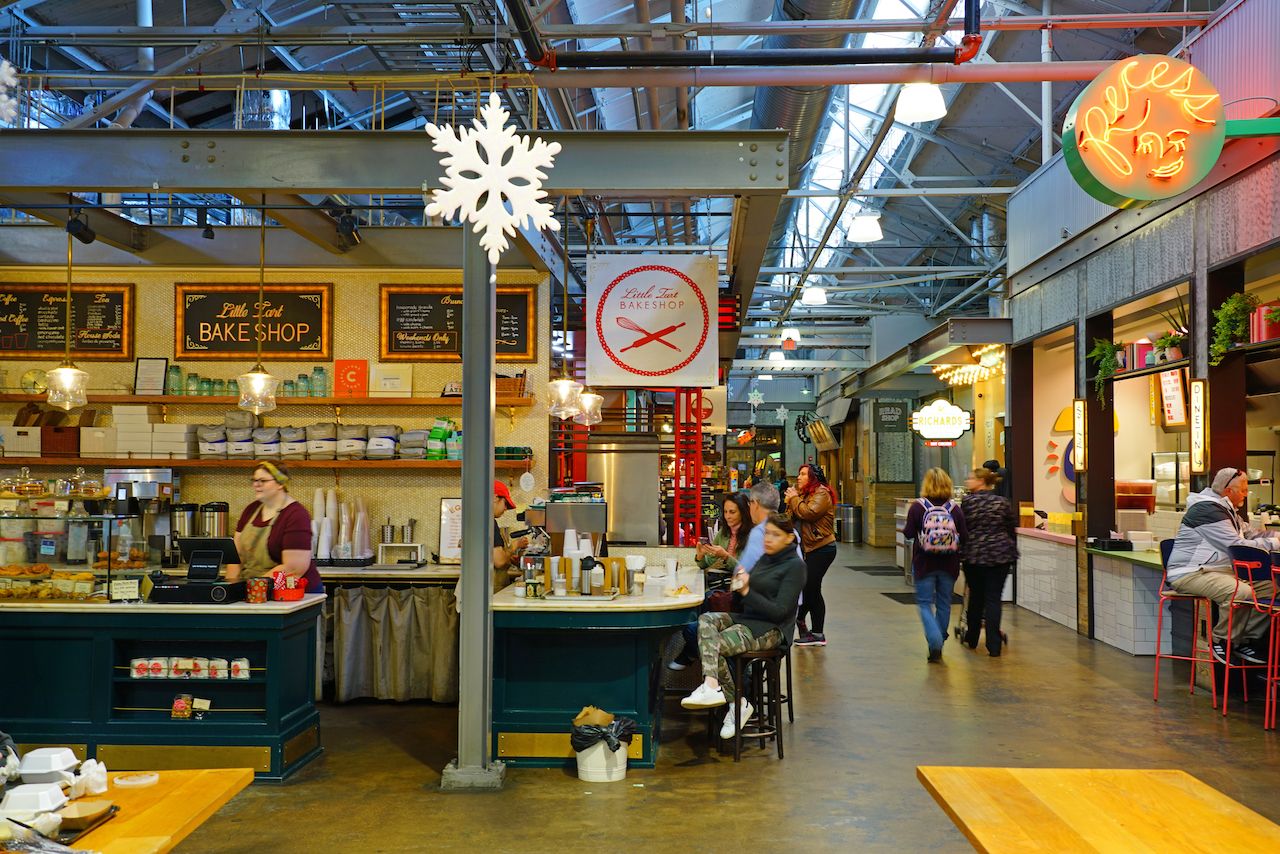 Krog Street Market, farther down the trail, is the second necessary stop for great grub. Once a 1920s warehouse, the industrial space is now an inviting meeting spot for locals in the Inman Park area. A smaller but no less worthy destination, KSM is usually less packed than the ever-popular Ponce and still affords a plethora of eclectic artisan food and drink options.

Of course, these aren’t the only appealing food options along the Eastside Trail. Ladybird Grove and Mess Hall serves Southern-inspired contemporary cuisine in a kitschy, camping lodge-themed space. Inman Perk Coffee is a BeltLine-adjacent, independently owned java joint. New Realm Brewing is a popular craft beer hall with expansive city views. You can beat the Atlanta heat with a King of Pops ice pop in the Historic Fourth Ward, grab a scoop of something sweet at Jake’s Ice Cream, or check out Irwin Street Market’s small but mighty food court.

Other sites to see on the BeltLine 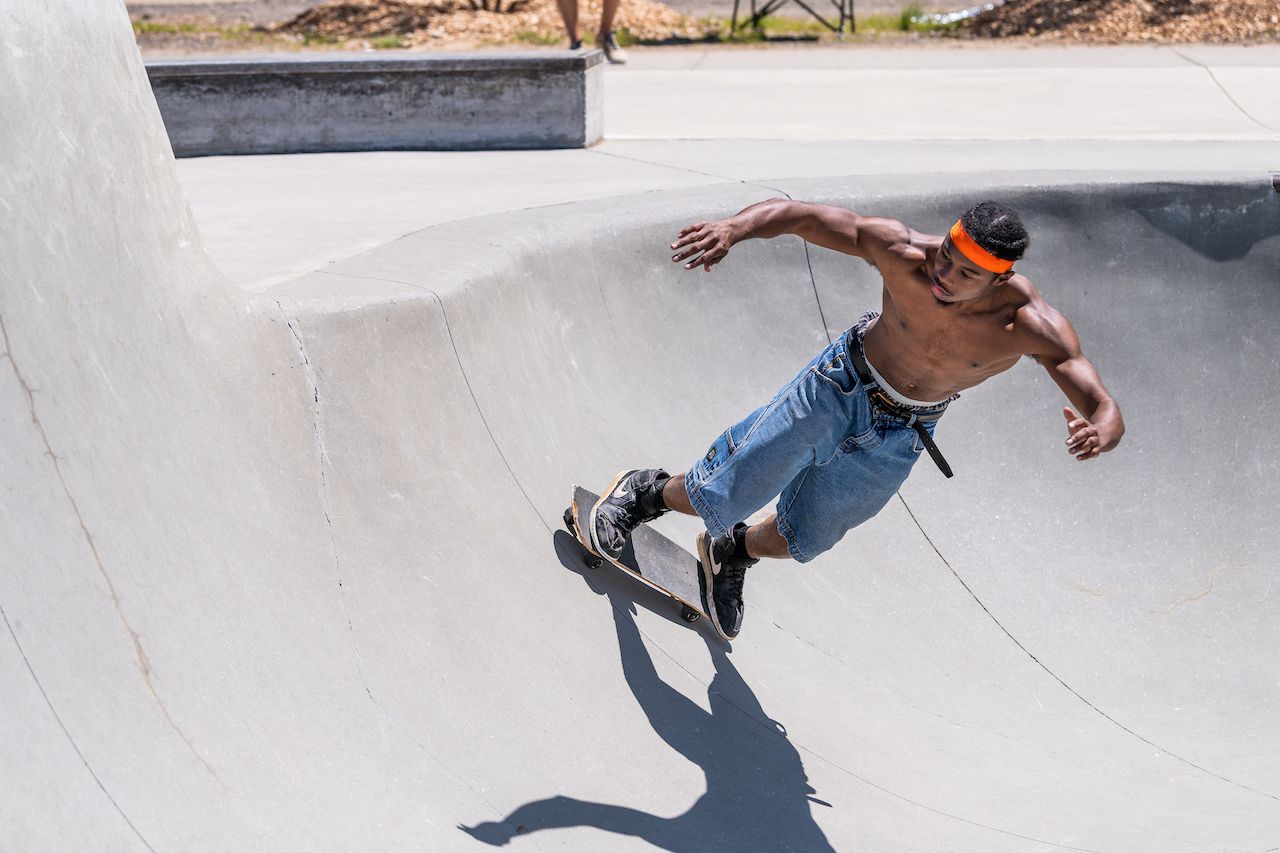 While Piedmont Park is Atlanta’s most lauded green space, the Eastside Trail’s Historic Fourth Ward Skatepark is equally thrilling for an alternative crowd. Located near Freedom Expressway and just past Ponce City Market, this is Atlanta’s first public-use space where wheel-happy hipsters can ride ramps and rails. There’s a nearby playground for little ones, and a multi-use athletic field, too. If hanging out on half-pipes isn’t your M.O., the Jimmy Carter Presidential Library and Museum is a 10-minute jaunt away on the other side of the trail. The museum, dedicated to the 39th US president’s body of work, is a must-see for American history buffs. 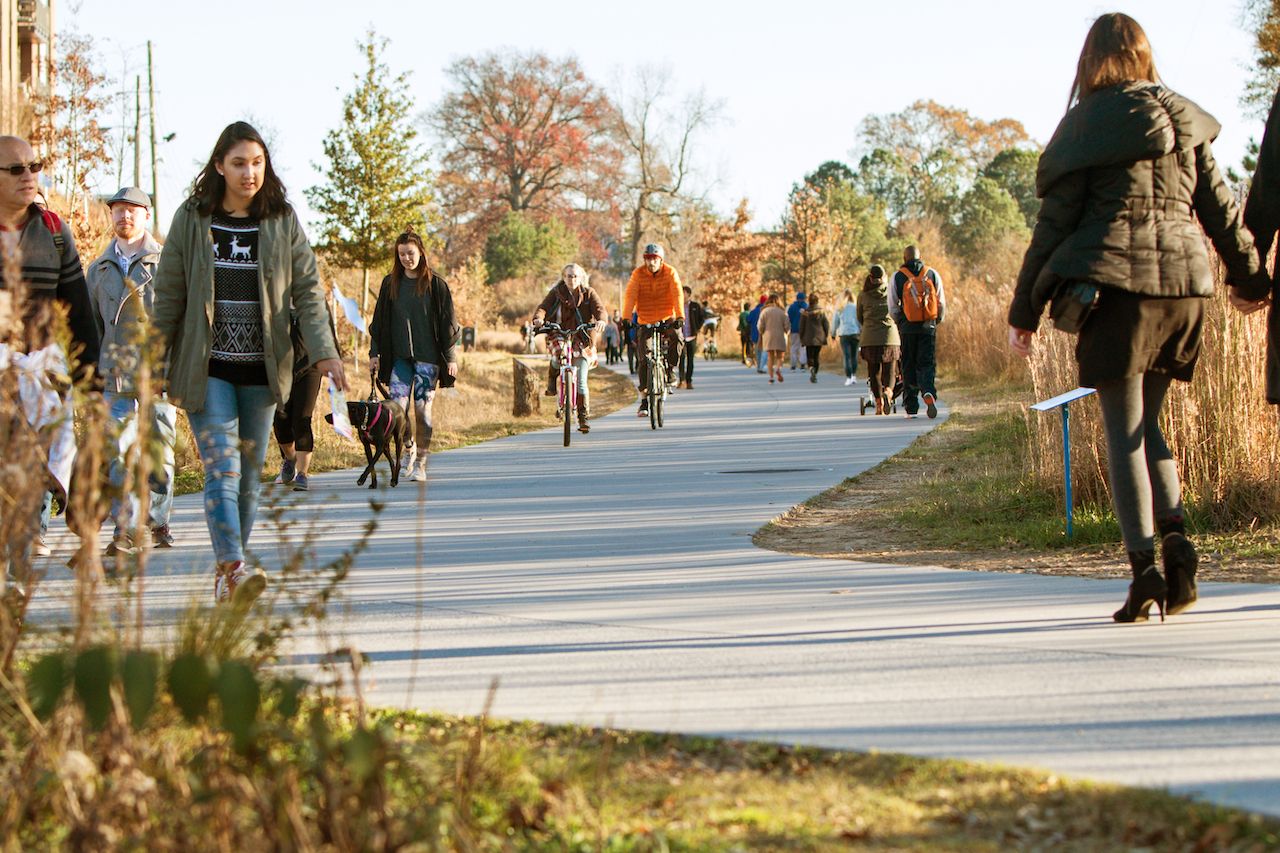 The final stretch of the Eastside Trail, ending at Memorial Drive, was completed and opened to the public in July of 2019. Still, most of the exciting sites peter out around Irwin Street in Inman Park. Here is where you can reward yourself with a baked good or local beer at Krog Street Market, and then check out the graffiti tunnel to conclude your journey. For those interested in seeing the whole trail, recently opened Dairies Coffeehouse and Cold Brew Bar in Reynoldstown is a modern spot to refuel with light bites and coffee afterward.

National Parks7 State Parks You Absolutely Have To Check Out in Georgia
Tagged
Outdoor National Parks Trip Planning Atlanta, GA, United States
What did you think of this story?
Meh
Good
Awesome