Spring, fall, or winter, icy rain, wind, or even the occasional and much longed for sunshine — whatever nature brings there are families armed with shovels who flock to Washington’s hard-packed, wet-sand beaches in bucket hats and galoshes to go clamming. And these mollusk enthusiasts know that the best beaches for clamming (and the many other types of seafood that Washingtonians love) are scattered all over the state, often nestled within expansive state parks.

Clamming is a surprisingly easy endeavor, unlike salmon fishing in Washington state, which takes more practice. That’s a big part of what makes it such an ideal activity for the whole family – little ones included (though they are likely to have more fun running down the beach and playing in the waves). 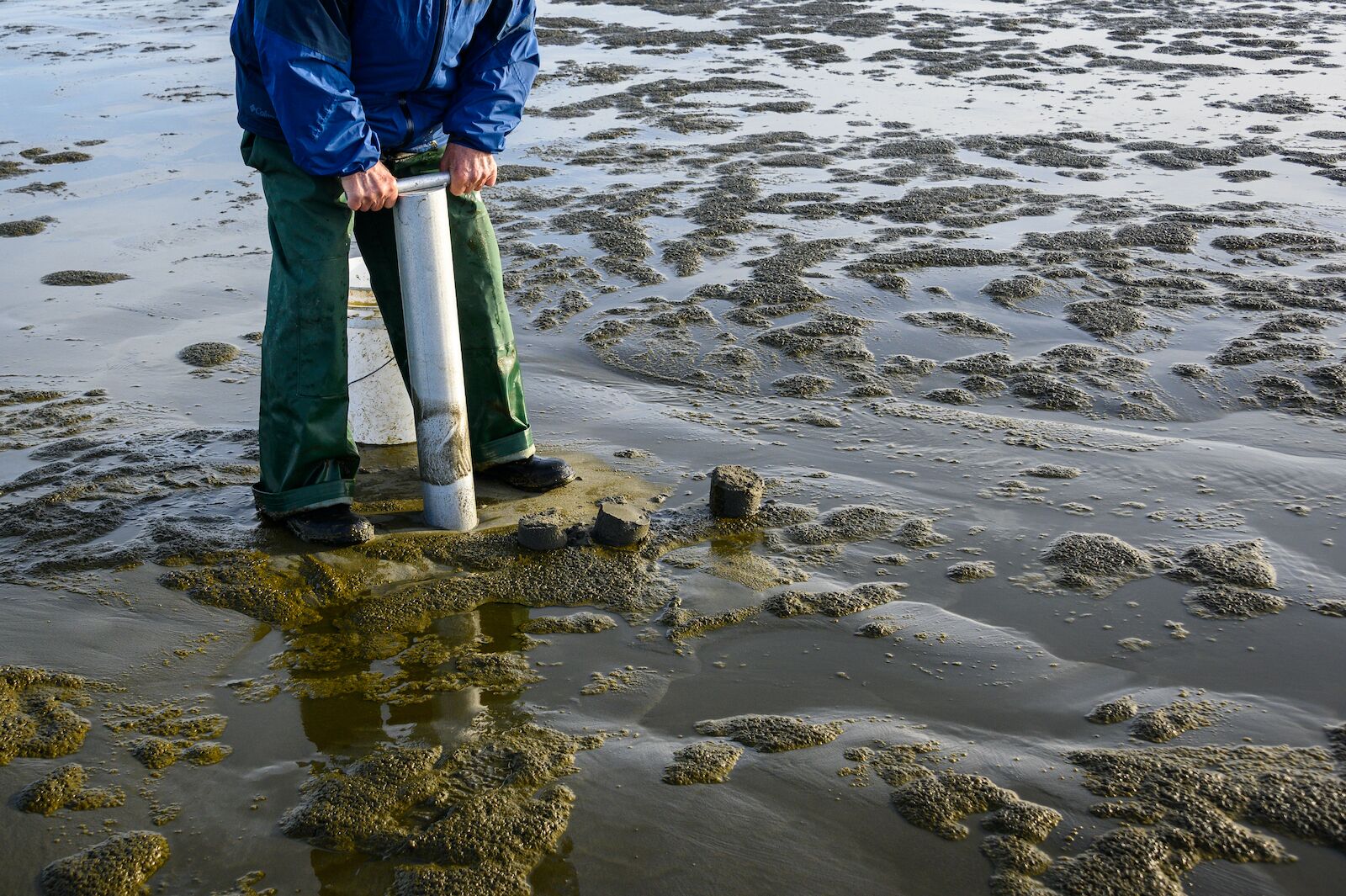 You need to arrive at low tide, armed with just three tools: a shovel or a clam gun, a bucket or other container in which to store your clams, and your clamming license, which you can learn more about purchasing here.

Clamming season passes quickly, so it’s important to check the Washington Department of Fish and Wildlife frequently for updates. The website posts the allotted days when clamming is allowed, as well as the clam limit per person. For instance, spring razor clamming season (which ran from April 29 to May 7) was just nine days long, and participants could take home 20 clams (and you have to keep the first 20 clams you find). Don’t fret though: There’s always another season not too far away.

In the fall and winter, people tend to head to beaches for clamming at night when the tide is low, but you’ll need a heavy raincoat, a flashlight, and cold weather gear. The beaches are open for clamming from 12:00 AM to 11:59 AM the following day, so you’ll also see some early birds heading onto the sand at 4:00 AM. 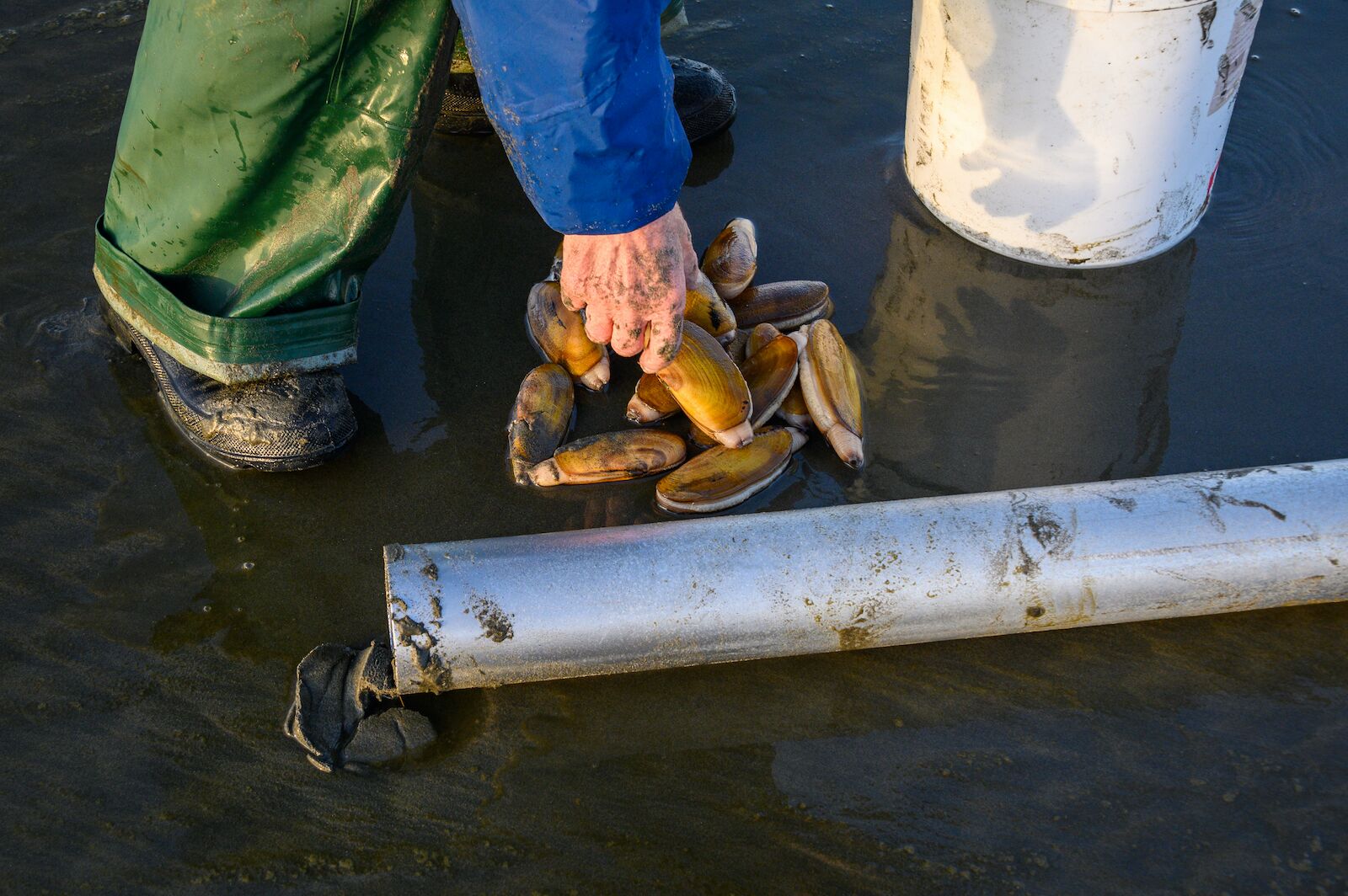 While you can start digging haphazardly on the beach, there are some very subtle signs you can look for: Experts recommend arriving two hours before peak low tide. You’ll want to look for those telltale, dime-sized dimples in the sand that indicate a clam’s siphon is just below the surface. They can also surface when the clammer smacks the surface of the sand with the handle of their shovel (the WDFW provides instructions on how to  dig for clams once you identify where they are burrowed).

Clams can be found on what the Washington Department of Fish and Wildlife calls “intertidal coastal beaches” – beaches that are almost completely exposed at low tide. Pacific razor clams are the most popular and widespread type of clam in Washington, but you can also find Manila, littleneck, butter, and horse clams, among others, as well as the iconic geoduck – a saltwater clam that is so massive its shell isn’t big enough to enclose its entire body.

The WDFW created a map outlining the seven beaches open seasonally for razor clam digging, but there are windswept and salty beaches throughout the Pacific Northwest where all sorts of clam beds lay waiting for your shovel.

The best beaches for clamming in Washington 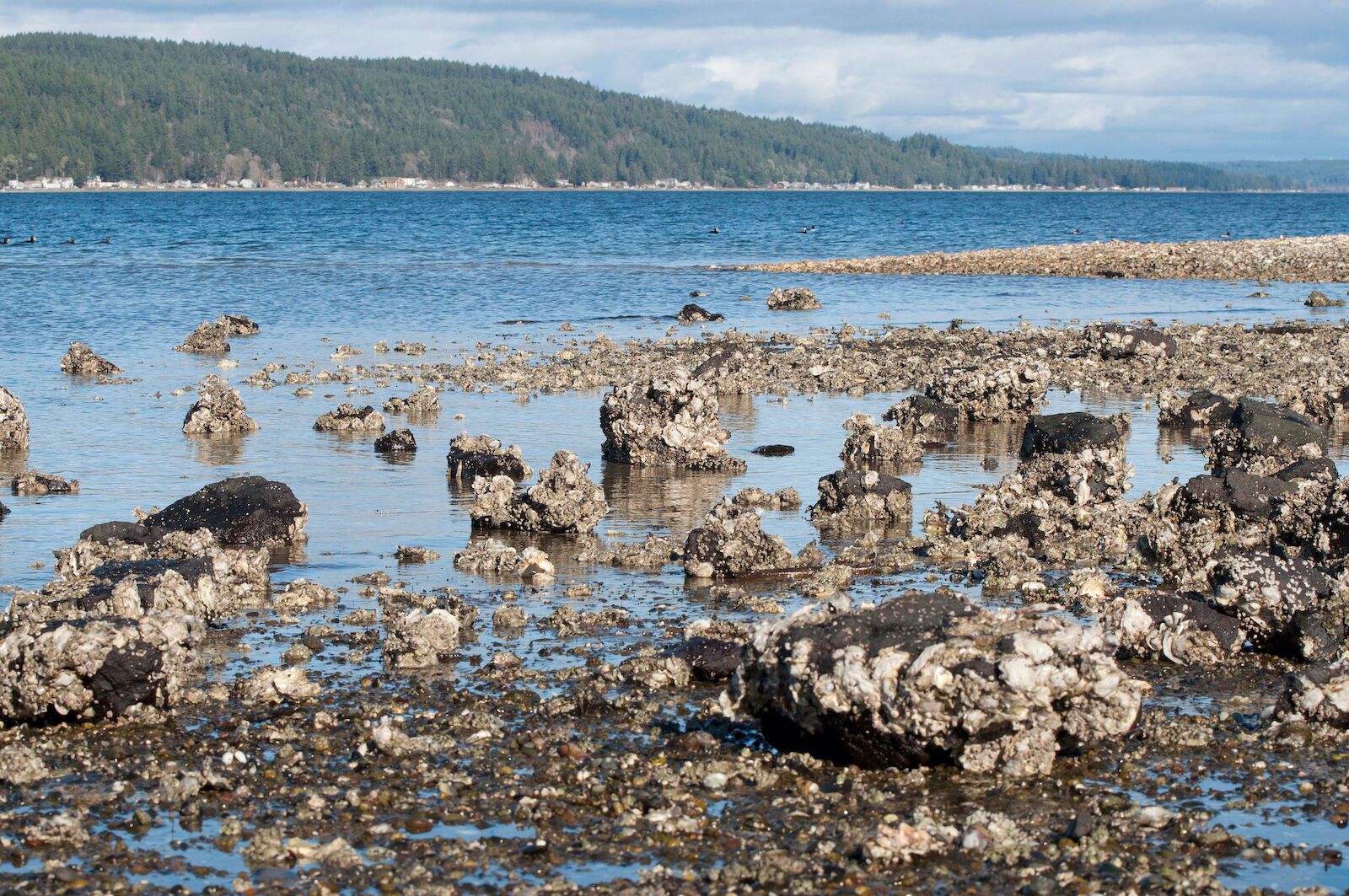 Butter clams are the most prevalent variety of clam at Potlatch State Park, but experts say you can also dig for Manila and littleneck clams here. The rocky beach requires sturdy footwear and a strong arm – you’ll likely be digging for clams through both sand and gravel. Oyster beds are located near the highway, according to the WDFW.

Open from May 1 through October 31 for clam and oyster harvesting, Duckabush is especially abundant with Manila clams, sometimes also called steamers by experienced clammers (littleneck clams can also be found here, but are not as common). Duckabush is an expansive beach, so be forewarned that searching for clams here takes time and patience. Located on the Olympic Peninsula, about a four hour drive from Seattle, the rocky, muddy beaches of Duckabush will get your hands dirty but fill up your clam bucket. 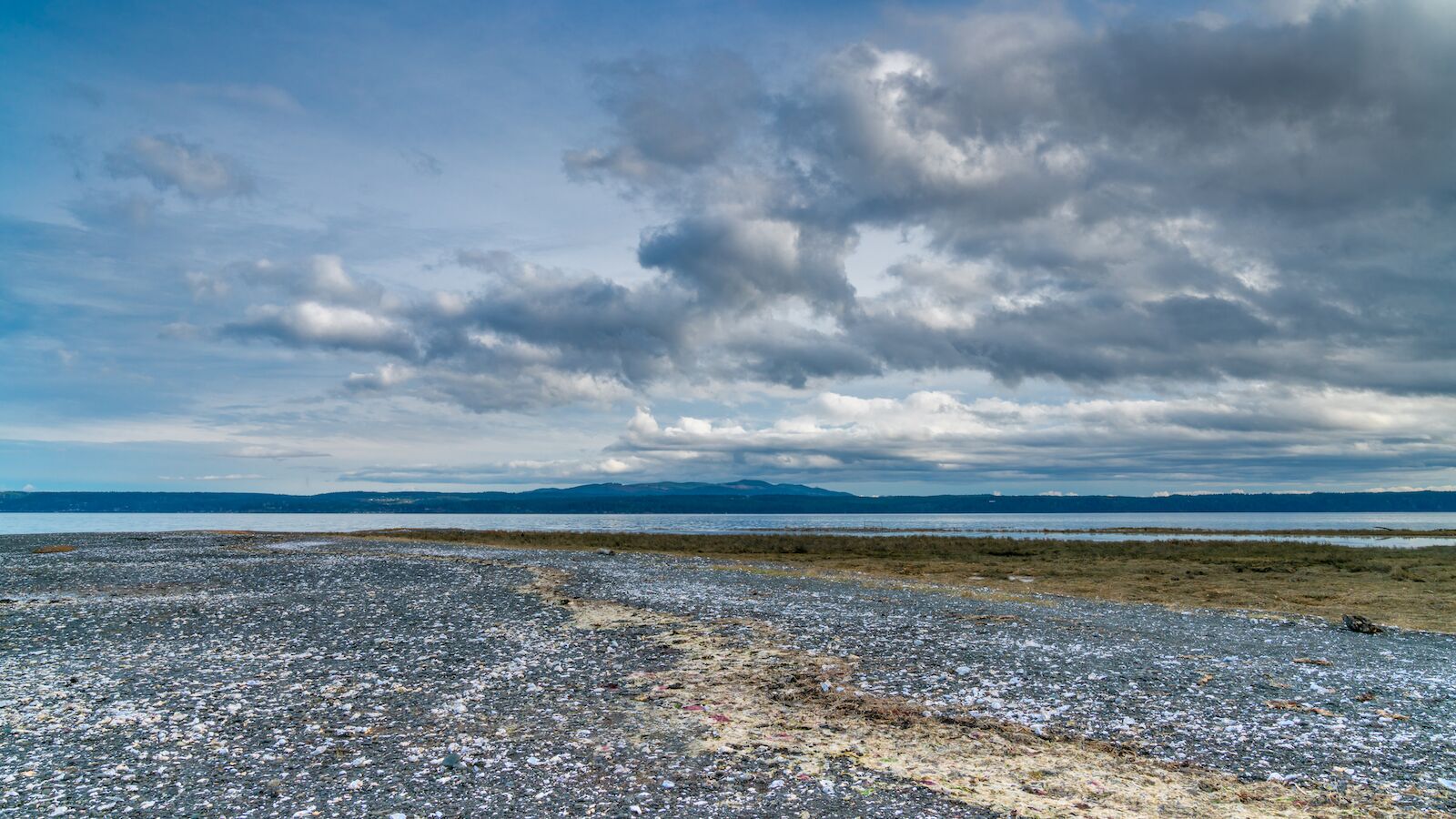 Less than 13 miles away from Duckabush is Dosewallips State Park, another one of the most popular beaches for clamming. Here you’ll find more Manila clams, and it’s also a popular spot for digging up geoducks, which the WDFW specifies can be found at “low intertidal zones.” While you’re at it, you might also harvest oysters at Dosewallips, which are plentiful here. 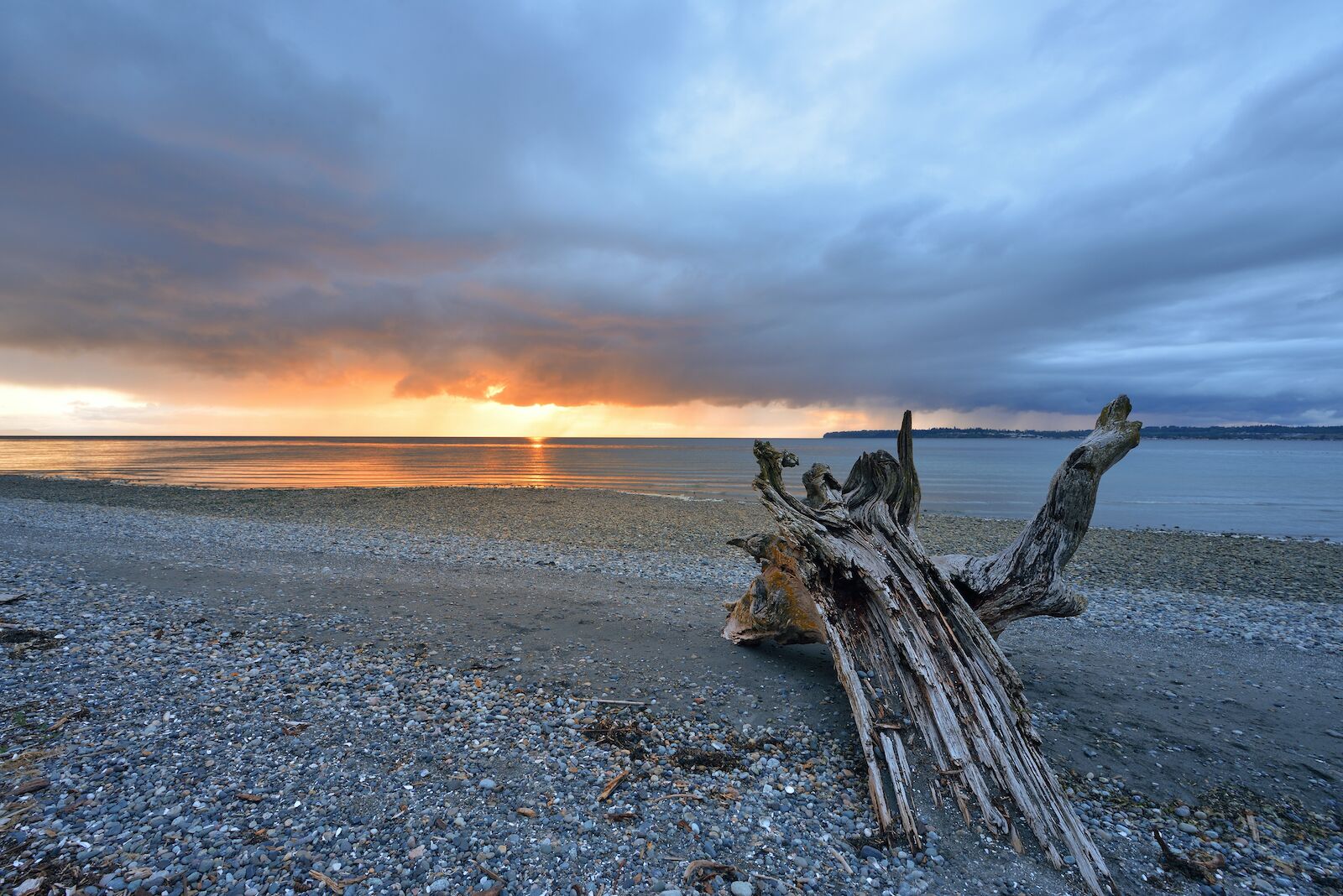 People like to go clamming at Birch Bay because parking is so close to the beach you can step out of your car and be digging for clams within minutes. The shallow waters make it easy to find Manila, butter, and horse clams. Oysters can be found here, too – though they aren’t quite as abundant as on other beaches on this list.

Butter clams and Manila clams are the most abundant at Oak Bay, but you can find littleneck clams here as well. There’s a lagoon in the park that regulars to the area say kids like to play in, so families are likely to flock here. There’s also a campground nearby.

There are few signs that will direct you to this beach, making it somewhat of a hidden gem, though locals know it well as one the best beaches for clamming in Washington. Like most other Pacific Northwest beaches, this one is rocky and cold but majestic. You might find this one a little less crowded than the more popular clamming beaches in the state. Littleneck and Manila clams are common here — there’s a planted clam area specified on this WDFW map where clammers are advised to dig. 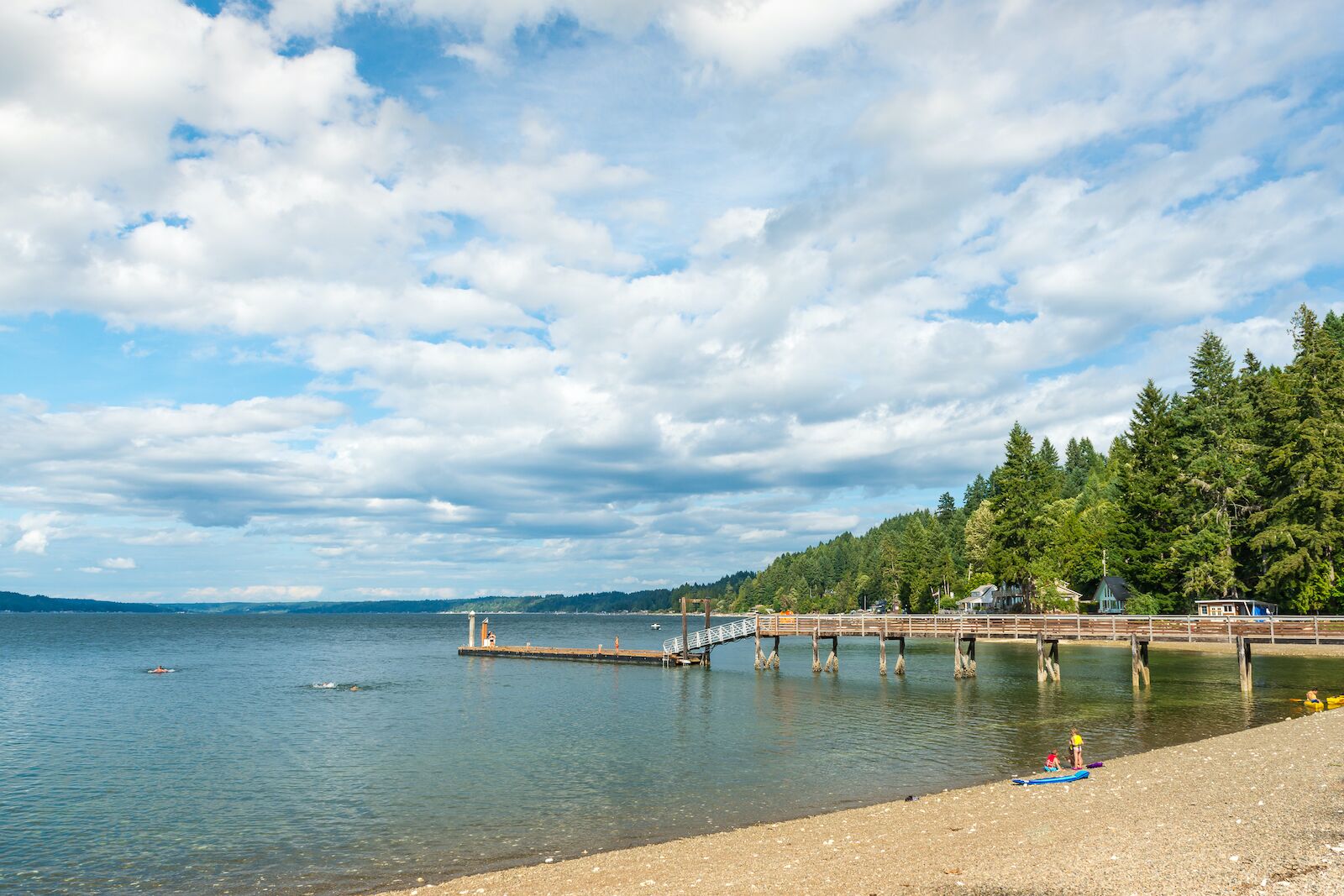 Located at the tip of Hood Canal just an hour and a half drive from Seattle, Twanoh State Park is one of the most family-friendly and versatile parks in the country. In the summer, a swimming area opens, and there are restrooms, a boat ramp, and camping on-site. As for clamming, you’ll find a wide variety here, including Manila, littleneck clams, butter clams, and cockles, just below the oyster beds. If you’re planning to hunt for oysters here, be aware that you are required to shuck the oysters on the beach, as the discarded shells form beds for new young oysters.

Food + DrinkYour Guide To the 14 Best Oyster Regions in the US
Tagged
Beaches and Islands Outdoor National Parks Washington, United States
What did you think of this story?
Meh
Good
Awesome